Industry leaders Anand Mahindra and Harsh Goenka have offered jobs to Agniveers. Several others have supported the scheme, saying it would benefit the industry by providing "trained and disciplined youth". 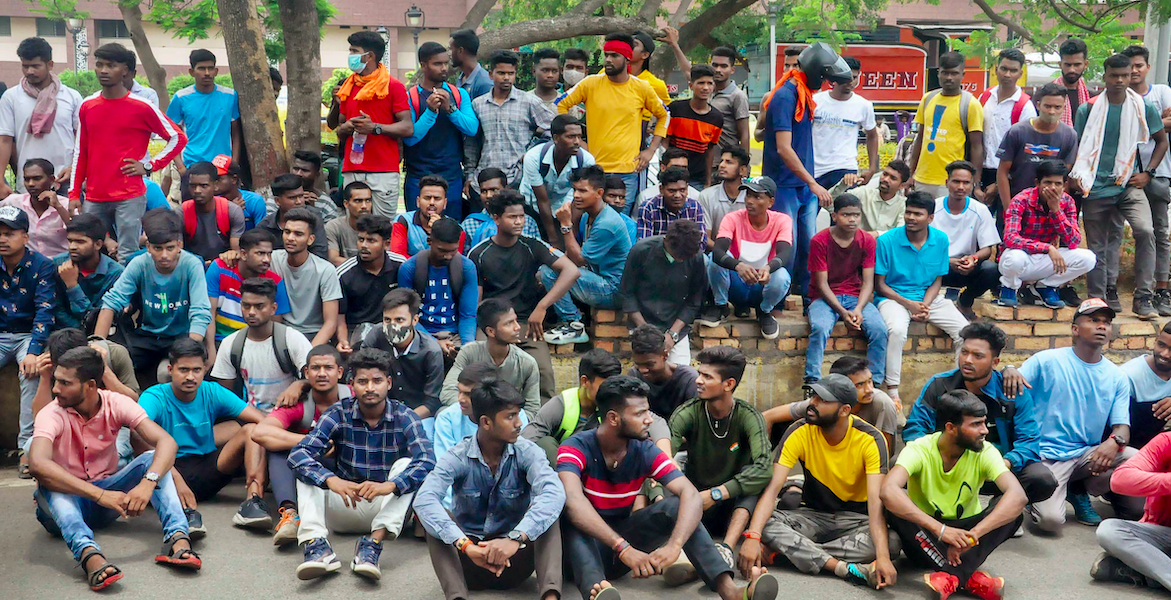 New Delhi: While countrywide protests against the Agnipath military recruitment scheme are raging, several industrialists have promised to offer jobs to Agniveers, the soldiers who will be recruited into the armed forces for a period of four years. The scheme plans to demobilise 75% of the recruited troops after four years without a pension, sparking concerns over the demobilised Agniveers’ employability.

Mahindra Group chairman Anand Mahindra on Monday, June 20 promised to offer jobs to Agniveers after they are demobilised. He wrote on Twitter, saying “When the scheme was mooted last year I stated-and repeat-the discipline and skills Agniveers gain will make them eminently employable”. He said he is saddened by the violence around the Agnipath program.

He added, “The Mahindra Group welcomes the opportunity to recruit such trained and capable young people.”

Saddened by the violence around the #Agneepath program. When the scheme was mooted last year I stated-& I repeat-the discipline & skills Agniveers gain will make them eminently employable. The Mahindra Group welcomes the opportunity to recruit such trained, capable young people

When a Twitter user asked the industrialist which jobs Mahindra Group would give to Agniveers, Mahindra responded, “Large potential for employment of Agniveers in the Corporate Sector. With leadership, teamwork, and physical training, Agniveers provide market-ready professional solutions to industry, covering the full spectrum from operations to administration & supply chain management.”

Within a few hours of Mahindra’s announcement, the chairman of RPG Enterprises Harsh Goenka expressed his intent to offer jobs to the discharged Agniveers.

The RPG group too welcomes the opportunity to employ the Agniveers. I do hope other corporates will also join us to take this pledge and assure our youths of a future. https://t.co/PE7Hc1y1W9

Several other industrialists have supported the Agnipath scheme, saying it would benefit the industry by providing “trained and disciplined youth”.

Tata Sons chairman N. Chandrasekaran said that the Agnipath scheme would help the industry, including the Tata group, get a pool of disciplined and trained youth.

“We recognise the potential of the Agniveers and welcome the opportunity this represents,” he said in a statement.

Kiran Mazumdar Shaw, the founder-chairperson of pharma major Biocon, said Agniveers will have a distinct advantage in recruitment in the industrial job market.

I firmly believe that Agniveers will have a distinct advantage in recruitment in the industrial job market. https://t.co/BLDNWi3VwB

The past record of India Inc’s hiring spree

Several military veterans, opposition leaders and journalists have asked the industrialists to furnish data showing how many ex-servicemen they had employed in the past in their respective corporate houses.

Former Air Vice-Marshal Manmohan Bahadur wrote on Twitter, tagging Mahindra: “Sir, could we have some stats as requested by the ex Naval Chief (Prakash)? I have retired after forty years in service listening to such promises.”

. @anandmahindra Sir, could we have some stats as requested by the ex Naval Chief?

I have retired after forty years in service listening to such promises. #AgnipathScheme #Agniveers #Agnipath pic.twitter.com/3ltmMMFK7V

Abhishek Kumar, who said he was a former Navy engineer, said he had approached the Mahindra Group for a job but did not receive any response.

“I am ex-navy engineer sailor, released from Navy on June 31, 2017. I approached Mahindra group for a suitable job but they did not reply to my request. After 5 years still I am jobless and now suddenly all companies are ready to give jobs to Agniveers. What a joke,” he tweeted.

He added that he had no complaints with the government’s new recruitment policy but with “white lies being spread by the corporate sector that they will look after Agniveers after four years”.

Another ex-serviceman tweeted as saying: “Dear Mr Mahindra, nearly 60-70000 fully trained soldiers retire year on year. If I may ask, how many of these do you presently absorb? Any statistics. We’ll come to Agniveers later when the time comes.”

Dear Mr Mahindra,
Nearly 60-70000 fully trained soldiers retire year on year. If I may ask, how many of these do you presently absorb? Any statistics. We’ll come to Agniveer’s later when the time comes. https://t.co/SCjJXGchdi

Rashtriya Lok Dal’s Jayant Singh Bishnoi has also asked industry veterans to disclose how many ex-servicemen do they currently have in their organisations.

To all the Corporates who (under pressure) are announcing that they will hire #Agniveers, please first come out with a disclosure of how many veterans you have in your ranks today? Before hiring Agniveers, I think the regular armed forces veterans should be prioritised!

The corporates who are lining up and promising to hire agniveers could prove their bona fides by hiring existing ex servicemen looking for a break: the hiring in pvt sector so far (as reflected in chart) albeit mainly in 35-40 age group has been sub par. Time to walk the talk!🙏 pic.twitter.com/4o84nU8AJM

What about government jobs?

Amid continuing protests and violence over the Agnipath scheme, the Union government has offered a slew of support measures to accommodate Agniveers in various government departments after their four-year service.

Separately, Haryana chief minister Manohar Lal Khattar on June 21, Tuesday announced that Agniveers will be given guaranteed jobs in the state government after completing their four-year stint in the armed forces.

But data shows that government departments have a terrible track record when it comes to filling jobs that are reserved for ex-servicemen. While ex-servicemen should make up 10% of Group C posts and 20% of Group D posts in Central government departments, they only account for 1.29% and 2.66% respectively. Quotas in Central public sector undertakings, Indian railways, paramilitary forces and public sector banks are also far from being met, the data shows.