Under the plan, the government will pay banks a percentage of the value of transactions done via RuPay debit cards and low-value direct interbank transactions for a year. 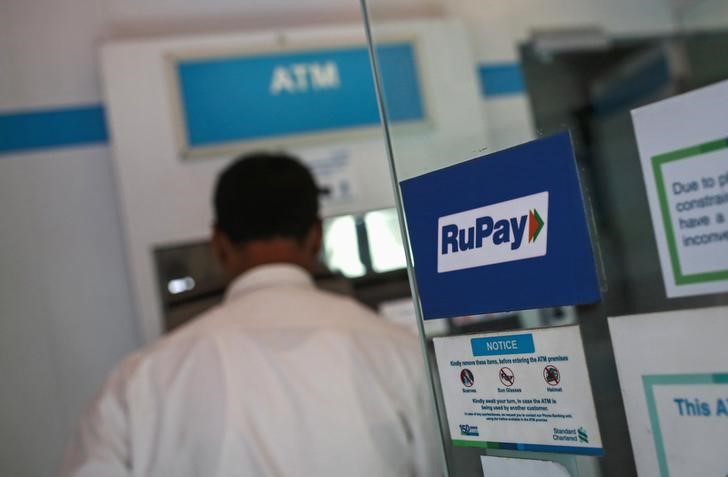 A RuPay sign is seen on the door of an ATM in Mumbai September 11, 2014. Credit: Reuters/Danish Siddiqui

New Delhi: The government on Wednesday approved a Rs 1,300 crore ($170 million) plan to promote domestic RuPay debit cards and low-value digital transactions to boost their use in marginalised populations, in a move that could challenge the clout of rivals like Visa  and Mastercard.

“Under the plan, the government will pay banks a percentage of the value of transactions done via RuPay debit cards and low-value direct interbank transactions for a year, backdated to begin in April 2021,” a government statement said.

The plan could further threaten the domestic market share of rivals Visa and Mastercard. Earlier this year, Visa complained to the US government that India’s “informal and formal” promotion of RuPay was hurting it in one of its key growth markets.

The scheme would cover reimbursement of processing fees on digital transactions up to Rs 2,000 ($26.20), government officials said.

“It will also help in making accessible digital modes of payments to unbanked and marginalised populations”, the government said, referring to people outside the formal banking and financial system.

Payments Council of India (PCI), an industry body, said the sector would “greatly benefit from this initiative”.

As of November 2020, over 600 million RuPay debit cards have been issued by banks.

Deepak Chandnani, the South Asia and Middle East head of Worldline, a payment and transaction services company, said the move would provide significant impetus to RuPay.

“An acquiring bank incurs end to end costs of about 15 basis points per transaction toward processing and other costs for debit card transactions. This incentive will provide a much needed reprieve to acquiring banks and encourage further digital transactions,” said Chandnani.

Started in 2012 by National Payments Corp of India (NPCI), a government backed non-profit, RuPay competes with Visa and MasterCard for the fast-growing market of digital transactions in Asia’s third-largest economy.

Mastercard and Visa count India as a key growth market, but have been jolted by a 2018 central bank directive for them to store payments data “only in India” for “unfettered supervisory access”.

Banks are currently barred from issuing Mastercard-branded cards to new customers, after the US payments giants was found to have not fully complied with the data localisation rules.