From mandatory Aadhaar and compromised tribunals to opaque political funding, this year's Finance Bill has it all. 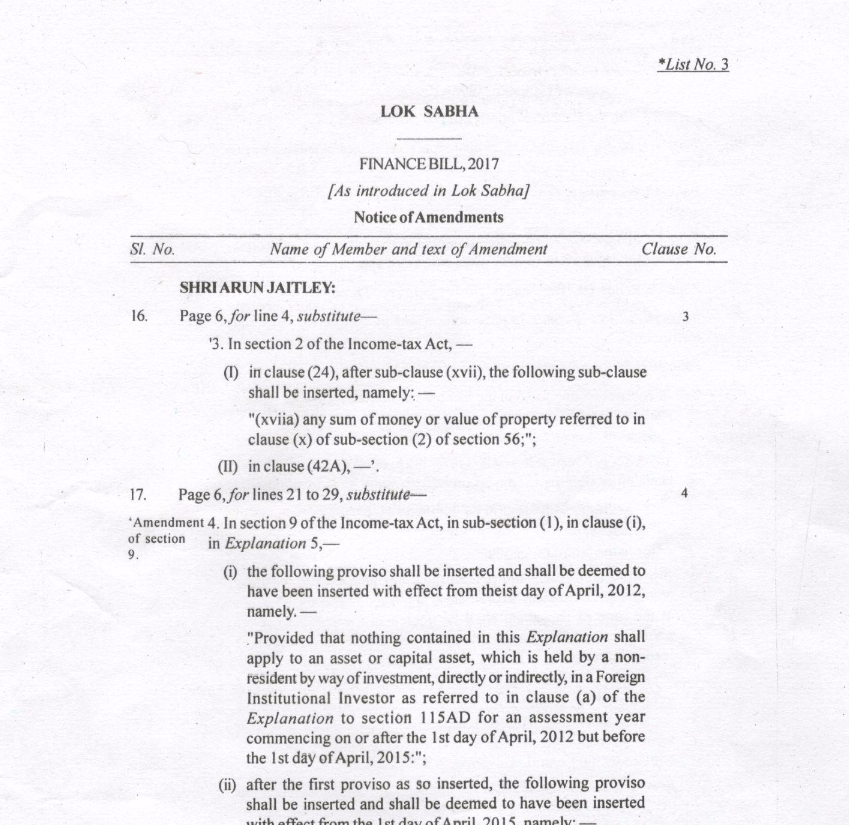 A screenshot of the Finance Bill 2017’s amendments. Credit: The Wire

Note: The Finance Bill is an annual government proposal that usually announces the levy of new taxes or changes in the country’s tax structure. This year’s Finance Bill was introduced in Lok Sabha on February 1, 2017. On Tuesday, amendments to the bill that impacted, changed or tweaked up to 40 different laws were circulated. Because the Finance Bill is a money bill and doesn’t have to go through the Rajya Sabha, opposition parties have condemned the current Finance Bill, saying it is a “backdoor” route for the Centre to pass a number of non-finance related amendments. The piece below breaks down the more contentious amendments.

What are the key changes proposed under the amendments? We summarise them below:

In case a person does not have an Aadhaar, he will be required to quote their Aadhaar enrolment number, indicating that an application to obtain Aadhaar has been filed.

Every person holding a PAN on July 1, 2017 and who is eligible to hold an Aadhaar, will be required to provide the authorities his Aadhaar number, by a date and in a manner notified by the central government.  A failure to provide this number would result in the PAN number being invalidated, and the person would be treated at par with anyone who has not applied for a PAN.  The government may exempt persons from this provision through a notification.

Table 1: Tribunals proposed to be merged by amendments to the Finance Bill, 2017

The chairpersons, vice-chairpersons, chairmen, or other members who are currently occupying posts with tribunals to be merged, will be entitled to receive up to three months’ pay and allowances for premature termination of their office term.  Officers and other authorities of tribunals that will cease to exist after the merger will stand reverted to their parent cadre, ministry or department.

Currently, terms of service of Chairpersons and other members of Tribunals, Appellate Tribunals and other authorities are specified in their respective Acts. Amendments to the Finance Bill, 2017 propose that the central government may make rules to provide for the (i) qualifications, (ii) appointments, (iii) term of office, (iv) salaries and allowances, (v) resignation, (vi) removal, and (vii) other conditions of service for these members.

These rules will be applicable to members which include the Chairperson, Vice-Chairpersons and members, among others, of specified Tribunals, Appellate Tribunals, and other Authorities.  The amendments state that the term of office for these persons will not exceed five years, and that they will be eligible for reappointment.  Further, the age of retirement for these persons has been specified, such as (i) 70 years for Chairpersons, Chairmen or Presidents, and (ii) 67 years for Vice-Chairpersons, Vice-Chairmen, Vice-Presidents, and Presiding Officers.

What are potential issues with this? Allowing the executive to determine the appointment, reappointment and removal of members could affect the independent functioning of the tribunal.  There would be conflict of interest if the government were to be a litigant before a tribunal, as well as determine appointment of its members.

Note that the Supreme Court in 2014, while examining a case related to the National Tax Tribunal had held that appellate tribunals have similar powers and functions as that of high courts and hence matters related to appointment and reappointment and tenure must be free from executive involvement.  The list of tribunals in this amendment includes several tribunals in which the central government would normally be a party to disputes, such as those related to income tax, customs, railways, and administrative Tribunals, and the armed forces Tribunal.

The above provisions will apply to tribunals, appellate tribunals, boards and authorities under the 17 Acts mentioned in Table 2 below.  The amendments also state that the central government will have the power to amend this list of Tribunals, through a notification.  That is, prior Parliamentary approval is not needed to bring other Tribunals into this scheme.

The amendments to the Finance Bill, 2017 propose to remove: (i) the limit of 7.5% of net profit of the last three financial years, for contributions that a company may make to political parties, (ii) the requirement of a company to disclose the name of the political parties to which a contribution has been made.

Power to impose penalty by officers

The Securities Contracts (Regulation) Act, 1956 and the Depositories Act, 1996 were amended in 2004 to empower the adjudicating officer to impose penalties on offenders for various offences including their failure to furnish information, documents or returns.  Amendments to the Finance Bill, 2017 propose to clarify that the adjudicating officer will always be deemed to have had this power.

This analysis has been republished, with permission, from PRS Legislative Research.