The Government should strive to ensure that every Indian has access to the full Internet and not just some corner of it chosen by Facebook or any other technology company. 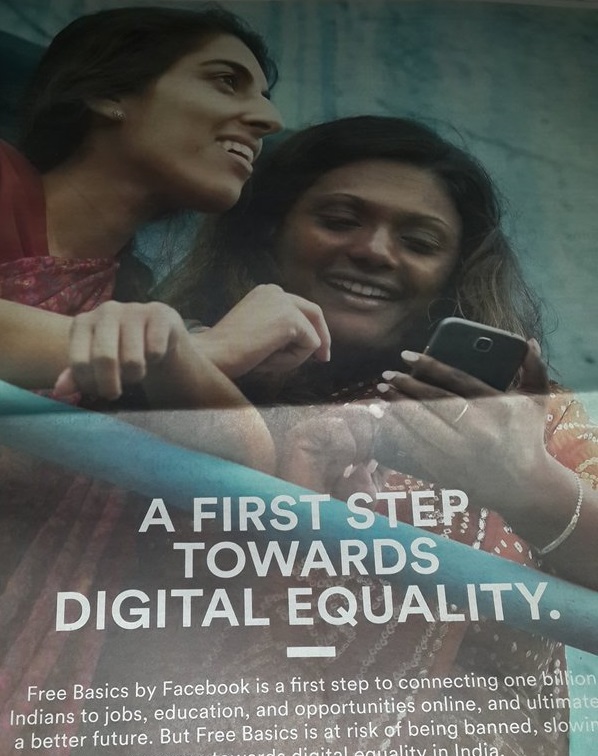 Over the last few days, Facebook has embarked on a massive advertisement campaign in favour of Free Basics even as TRAI has asked the company to temporarily suspend the service. Credit: Manikandan

Today it has ads around India saying “What net neutrality activists won’t tell you”.

We don’t have a business axe to grind, we’re not working for Facebook’s rivals, and if anything, we’ve been part of Digital India far, far longer than Facebook has existed. We’re open to questioning.

Unlike Facebook, who tried to silently slime this thing through last year when it was called Internet.org, and then are spending about Rs. 100 crores on ads – a third of its India revenue? – to try and con us Indians this year again. This is  after we’d worked hard to ban these kind of products, technically called “zero rating apps” last year. (Remember the million signature campaign last year? That was us.)

This Facebook ad spend doesn’t include the full-on Mark Zuckerberg love event put up for our Prime Minister when he visited the US, aimed again at greasing the way for this Free Basics thing through our government. (It worked. I think TRAI opened up this closed issue so Facebook could get another shot at pushing it through again.)

And the ad spend is above and beyond all the other ads and messages they’ve put on your timeline asking you to save “the free internet” etcetera that you may have even clicked on.

I’ll take on each of the 10 points that Facebook says that we don’t tell you about in a bit. But first you should know why we’re making a fuss and going up against this billion dollar giant. What’s it all about?

Simply it’s this. Our airwaves and wireless spectrum belong to us, the citizens of India. The government of India temporary licenses this on our behalf to telcos under some terms and conditions, and those terms have always pushed for the development of all of India, including our poor.

In fact, India’s telecom policies so far have produced a minor miracle, with over a billion connections in our country changing and improving all our lives. The basis for this has always our policies which have forced our mobile operators to offer a full and open internet, accessible by anybody. Many poorer countries look to us for inspiration on how to do things right.

It is because of these policies that you probably are reading this on the mobile internet, maybe even on Facebook on your phone. But Facebook has been spending millions of dollars to change our policies.

Imagine now that there’s a new policy that could let a mobile company only offer you Facebook and nothing else on government spectrum? Not Google, not Naukri, not You Tube, no site you really need. But instead all you can have is Facebook, and a bunch of other teeny tiny sites, and that’s all you can ever use.

That’s what Facebook wants to offer the poor of India who can afford a phone but not a net connection on it. Given that data packages cost as little as Rs. 20 a month while phones cost Rs. 2,000 and up, we think their thesis itself is flawed, and they’re using it to justify a large internet user land grab, but let’s roll with it for a moment.

What Facebook wants is our less fortunate brothers and sisters should be able to poke each other and play Candy Crush, but not be able to look up a fact on Google, or learn something on Khan Academy or sell their produce on a commodity market or even search for a job on Naukri.

An analogy is this: people need a balanced diet of proteins, fat, carbs, vitamins and minerals and the government has a distribution system called Sahakari Bhandars to get these to us. Facebook wants to use our government system to sell only its branded cocaine and nothing else, on special shops, to people who can’t access any other shop. Something like that.

In their ads, they’ve been claiming they want to bring “digital equality” when they’re actually bringing digital slavery or digital apartheid to our poor. Unlike the rest of us who are all digitally equal, being able to access the full and complete internet which has more than a billion sites on it, Facebook wants to offer our poor, our young and our future a few dozen sites, that’s all.

Internet.org was their earlier attempt at doing this. We’d pointed out even the name was a lie, as it was neither the internet that was offered, nor was it done on a non-profit basis that dot orgs typically use. So they’ve changed the name to Free Basics and have come back to try shove it down our throats again. Same poison, new bottle but with big ad campaign.

Here’s the gist of the tussle. What we’re telling our government is this: On our airwaves, make sure that every mobile carrier in India offers every person in India the full internet and not just some small corner of it chosen by Facebook. That’s it. No special Facebook landgrab on government property, our wireless spectrum.

What Facebook is saying is this: allow the mobile companies using government-owned bandwidth to offer just Facebook and Facebook-chosen sites and nothing else, and let them grab the land or users they want.

Facebook says it is doing this out of some charitable aim to get more of India online. (As though spending a large portion of your India revenues on full page ads pushing a so-called charity is apparently charity.) Its obviously business.

We’ve responded saying “We love your idea of data for charity, but if you really mean to do charity then offer something that is the entire internet to people, not just your chosen sites. Like say 500mb a month free to every Indian”. They can, but no, they won’t do that. They want use our government’s bandwidth to get our poor using Facebook with no other real option in sight.

Now to counter the “10 clarifications about Facebook Free Basics” that we ‘activists’ have apparently hidden from you.

Data is cheap enough in India and eventually everybody will be on the full and open internet, given time. Or our government could offer a neutral and free internet service to its citizens. There are other solutions to getting the poor online. Selling our people to Facebook doesn’t need to be one.

More to the point, this program, call it digital apartheid, if you will, has been roundly condemned by experts ranging from Tim Berners-Lee, the gent who invented the internet, to PhD researchers to civil society officials working in the field, globally.

The fact that Tanzania didn’t know how to say no to Facebook doesn’t mean India has to say yes. In fact, we hope that India saying no to this digital apartheid will inspire the African and other poor nations to kick out this evil program that serves no one but Facebook at their government’s expense.

If they’ve spent a hundred crores rupees and a large chunk of their current Indian revenues kissing up to our politicians and telling our citizens they want to do charity, then there absolutely WILL be a monetary payoff. If a product is free then the user is the item being sold

The real reason is something they have never denied: their rivalry with Google and their questionable stock price. We are no apologists for Google, but this might interest you:

Both companies have 1.5 billion users, but Google makes Rs. 70,000 crores while Facebook does less than one-fifth as well. In other words, for every new user that comes on the internet, Facebook makes Rs. 8, while Google makes around Rs. 48.

Facebook’s stock is valued at a much higher multiple than Google, but people have begin to ask why they deserve this. With no reason to support the stratospheric price, it will fall.

For Facebook to have a chance to keep their stock price high, and to keep Zuckerberg and wife as rich as they are, they need to find new users who sign up for Facebook, but at the same time do not use Google. Enter the strategy: A program to offer Facebook but not Google at the mass, poor people level.

Who is outside the first 1.5 billion people? Mostly people in India and China. Facebook is banned in China. So who becomes essential to Mark Zuckerberg’s balance sheet? Enter us Indians. What’s a hundred crores of ad spend, against tens of thousands crores of valuation?

Now you have a second view of what’s happening. A view they have never denied.

By the way, there’s no NGO subsidiary or separate CSR effort at Facebook that runs Free Basics. It’s part of their main business unit.

Yes, we net neutrality activists are opposed to Facebook’s attempt to disconnect Indians from the full internet. Yes, we are opposed to the digital apartheid they want to bring about, giving the poor only Facebook but denying them other sites.

And yes, we’ll be happy if they just gave data free, without terms and conditions – after all, it’s our wireless network they want to offer their service on. It has to work for us the people of India, not just for the rich shareholders at Facebook.

There are many other reasons why Facebook Free Basics Digital Apartheid is bad. Its bad for entrepreneurs – your business cant be discovered by these new potential users on the internet till you advertise on Facebook. The same goes for big businesses.

Also, if Facebook is allowed to get away with this then every other company will offer its own “free Basics” with other sites and we will grow up as a fractured country, unable to speak with each other because we are all on different, unconnected micro-networks.

The internet has been the biggest revolution of our times. The breadth and width allowed a Zuckerberg to become the businessman he is. Tragic that he is pushing for a micro network outside the internet where a future Zuckerberg can never realised his potential. It’s imperialism and the East India Company all over again. Under the lie of “Digital equality”.

We are happy to support any effort that brings the full and unfettered internet to as many Indians as possible, as cheaply as possible. This is not that effort.

We have a petition at http://www.SaveTheInternet.in

We don’t have a hundred crores to spend.

All we ask is that you consider this view, decide for yourself what’s best for our country, and see if you are inclined to agree with us.

If you are, please sign the petition above, and share this with as many people as possible.

Your sharing can overcome any billionaire’s ad budget.

Mahesh Murthy is an Indian venture capitalist. This article originally appeared on LinkedIn and is republished here with the author’s permission.