Every debate aimed at demanding accountability and ethical behaviour from e-commerce platforms seems to come to an abrupt end with the invocation of consumer interest. 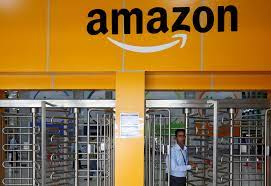 An employee of Amazon walks through a turnstile gate inside an Amazon Fulfillment Centre on the outskirts of Bengaluru. Photo: Reuters/Abhishek N. Chinnappa

Over the years, the business of brick and mortar stores, especially those operating in the mobile retailing business, has been thoroughly cannibalised by e-commerce giants, thanks to a number of predatory trade practices which have added to the bottom line of e-commerce giants but eroded the earnings of millions of small retailers across India. This destruction of entrepreneurial capability has been scripted in part by the avarice of  e-commerce platforms and in part by the regulatory authorities and the executive, both of whom have not shown enough spine, or for that matter, clarity and focus.

Consider, for instance, that while Amazon India claims in one of its blogs that it seeks to digitise close to 10 million MSME businesses “helping them reach more customers than ever before”, its track record speaks a different story.

As reported by Reuters, two of Amazon India’s special merchants – Cloudtail and Appario – accounted for 35% of its online sales by 2018. It is only in recent years when the regulatory heat started bearing down on the e-commerce monolith that the company decided in August 2021 to not renew its JV with Catamaran Ventures, a company owned by the Infosys founder N.R. Narayan Murthy. Catamaran ventures was part owner of the parent company of Cloudtail.

The weeding out of Cloudtail from the retail landscape is welcome, provided it yields  ground to hundreds of mom-and-pop stores that can create and nurture a truly competitive landscape conducive not just for the smaller businesses but for consumers as well. Otherwise, replacing a Cloudtail with another entity backed by domestic e-marketplaces means that the status-quo stands as it is with the key difference being that a domestic marketplace backed entity will be wolfing down the business turf of MSMEs instead of a foreign player.

Also read: From Amazon to Asset Monetisation, Policy Contradictions are Inherent in the Sangh Ecosystem

This is where the draft rules for e-commerce released by the Consumer Affairs Ministry in July last year managed to hit the nail on the head. Unlike the earlier set of e-commerce rules issued by the Commerce Ministry, the new draft released by the Consumer Affairs Ministry makes no distinction between a foreign or domestic marketplace. This is particularly relevant today considering that a number of big-wig domestic players have been eyeing a big bang foray into the e-commerce space.

However, as soon as the new draft e-commerce rules dropped, objections started pouring in. Not just from foreign and domestic marketplaces but also from the Ministry of Finance and NITI Aayog. The attempt of the consumer affairs ministry to tamp down on flash sales, check burgeoning business activities of private labels (essentially the marketplace’s own products planted on the website) and scrutinise the relationship between vendors covertly working in conjunction with the marketplace received a lot of negative coverage in the media with many billing it as incautious and irresponsible policy making that will likely scare away foreign capital.

What went unpublicised were the concerns of the retailers. Traders associations like CAIT or the Confederation of All India Traders has over the years taken the pains of highlighting how flash sales hurt. In a white paper released recently, the trade body points out, “While the shift from physical marketplaces to e-marketplace should have increased accountability, in effect there is no transparency. Rather, there is information asymmetry for both sellers and consumers. Neither of these stakeholders are aware of the mechanisms that facilitate sudden discounts, flash sales, fluctuating prices etc. for the same product and service categories. Such practices eat into the seller’s margins and consumers are unable to plan/time their purchases.”

But flash sales are the lesser evil compared to what Amazon India has been up to with its private labels. To understand the predicament of the lay businessman better, one needs to understand the strategies that Amazon India has adopted to expand its business, much to the detriment of other smaller stakeholders. Internal documents accessed by Reuters show that Amazon adopted a clandestine strategy of copying products by other sellers on its website and subsequently producing them under its own label. A fallout of this strategy was the Solimo brand that the company created for its Indian markets.

The Solimo strategy, as per the internal documents accessed by Reuters, was to “use information from Amazon.in to develop products and then leverage the Amazon.in platform to market these products to our customers”.

The fact that Amazon was eating away the businesses of smaller sellers is evident from one of the internal strategic documents of 2017 which predicted that by 2020 Amazon’s private brand sales would reach close to $600 million. Additionally, revealed in the document was Amazon’s goal to be the top three brands in each sub-category they were operating.

Obviously, data is the window through which marketplaces leverage their vantage position as intermediaries between the buyer and the seller to advance their own products and profits.

“The use of data,” the white paper by CAIT states, “plays an important role in the launch of private labels since this gives an unfair advantage to the e-commerce platform as they do not share the data with the other sellers on their website. This allows them to see the product categories generating maximum sale and profits without any research and development and make relevant and more customer-centric private labels.”

The smokescreen of consumer interest

Consumer interest has over the years emerged as the go-to smokescreen for e-commerce platforms as well as its advocates. Every debate aimed at demanding accountability and ethical behaviour from e-commerce platforms seems to come to an abrupt end with the invocation of consumer interest. It is as if an implicit concession is being made and the reader is asked (in not so many words) to co-opt into the idea that only a marketplace which prioritises its own interests over the interests of the other sellers can be of real utility and value to consumers. That an ethically-run marketplace which honours data norms, does not indulge in predatory trade practices and is committed to running a clean business can be equally, if not, more beneficial to its customers does not seem to figure in the very-limited financial imagination of these advocates. For this myopia of imagination and possibilities, it is the government that is at blame as well. Numerous set of e-commerce rules, one more obfuscating than the other, has muddled the playing field while the stakes keep getting higher and higher as digital penetration becomes stronger by the day.

It is already too late for India to not have a decisive and categorical set of e-commerce rules, one that sets a clear tone on where exactly the loyalty and commitment of the government lies when it comes to supervising the e-commerce sector in India. Thousands of MSME units have already paid dearly with their livelihoods while “mature and healthy decision making process” continues between the finance ministry, NITI Aayog, DPIIT and the consumer interest ministry. A comprehensive set of e-commerce rules that vouches for the interest of the small trader is the need of the hour.