Popular work visas used by Indian IT companies and by Silicon Valley tech giants like Apple and Google – H-1B, H-2B, and a few categories of J and L visas – shall remain suspended until December 31. 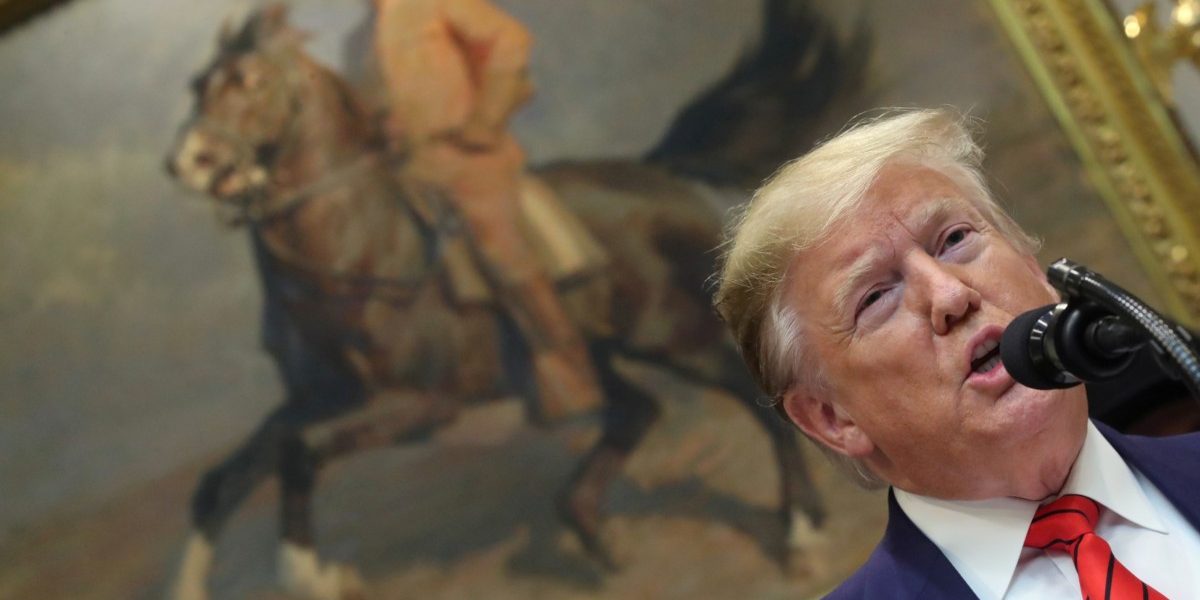 US President Donald Trump speaks in front of a portrait of former president Theodore Roosevelt during an event in the Roosevelt Room of the White House in Washington, U.S., October 9, 2019. Photo: Reuters/Jonathan Ernst/File Photo

New Delhi: US president Donald Trump on Monday signed a proclamation that temporarily suspended a range of worker visas for non-immigrants until the end of 2020, in a move that will have serious consequences for Indian techies and the domestic IT industry.

The proclamation, which will not apply to people who already hold visas, paints the decision as a move needed to counter the unemployment crisis kicked off by the COVID-19 pandemic.

“Under ordinary circumstances, properly administered temporary worker programs can provide benefits to the economy.  But under the extraordinary circumstances of the economic contraction resulting from the COVID-19 outbreak, certain nonimmigrant visa programs authorizing such employment pose an unusual threat to the employment of American workers.” the text of the order notes.

“Many workers have been hurt through no fault of their own due to coronavirus and they should not remain on the sidelines while being replaced by new foreign labor.”

This means that many popular work visas used by Indian IT companies and Silicon Valley tech giants like Apple and Google – H-1B, H-2B, and a few categories of J and L visas – shall remain suspended until December 31.

Equally significant is Trump’s promise to reform the H-1B programme, specifically by moving away from the existing ‘lottery’ system and prioritising workers who are offered the highest wages.

Who all will be impacted?

According to the order, the ban kicks in on June 24. This means that if an Indian national’s H-1B visa application is approved after this date – the process ends before October 1, which is the start date – they will not be allowed to enter the US until the temporary suspension comes to an end.

The move, however, will not impact any current visa holders who are currently located either inside or outside the US.

The H-1B programme is for high-skilled workers (mostly dominated by the American tech industry and the Indian IT sector), the L-1 programme is for transferring employees within a company (a tool that amongst Indian companies is used most prominently by Tata Consultancy Services to move staff from India to US), while H-2B visas are for non-agricultural temporary workers.

Trump had initially hinted that “big businesses” that have been dependent on these visas for a long time would have some exceptions. The US president reiterated this claim as recently as last week in an interview to Fox News.

But there appear to be such reprieve announced in the executive proclamation. There are a few smaller exceptions – for workers in essential services (food supply sector) or for medical purposes (COVID-19 research) – but nothing that would help Indian IT companies.

Why does this hurt Indian IT companies?

Companies like Infosys, TCS and Wipro have traditionally followed what they call an ‘offsite-onsite’ employee ratio of 80:20. This means that if 10 employees are assigned to a particular project, eight work from India, and two are required to work in the US.The industry therefore requires H-1B and other visas in order to implement this model, although in recent years almost all major software services companies have ramped up “local hiring”.

Critics of the Indian IT industry, however, argue that outsourcing companies use H-1B visas to lower their costs of hiring US-based employees – basically because its cheaper to hire an Indian and send her to the US on a H-1B visa than trying to employ an American citizen who already lives in the country for the same job.

Indian companies reject this argument, and consistently point out that their work makes US companies more competitive and efficient.

In a statement put out on Tuesday morning, industry lobby association Nasscom said that barring the entry of “certain non-immigrants into America” is “misguided and harmful to the US economy”.

“…. this new proclamation will prevent our companies and thousands of other organizations from accessing the talent they need from overseas. With very few exceptions, Indian nationals and others who are granted new H-1Bs or L-1s as well as other visa types after 23rd June will not be allowed to enter the United States until the proclamation expires. Even though our companies have hired tens of thousands of Americans and invested billions of dollars in recent years, they, like others in the sector, utilize such high-skilled individuals to service their clients. This new proclamation will impose new challenges and possibly force more work to be performed offshore since the local talent is not available,” Nasscom’s statement notes.

How bad will it hurt them, economically-speaking?

This is less clear. There is no doubt that Indian IT companies and Indian engineers have been big beneficiaries of the H-1B visa regime. According to latest data, as of April 1, 2020, the US Citizenship and Immigration Services (USCIS) had received about 2.5 lakh H-1B work visa applications. ‘Indians’ had applied for as many as 67% or 1.84 lakh  of the total H-1B work visas for the current financial year ending March 2021.

Today’s ban is clearly a major escalation and a huge problem — especially because the October period is when the new fiscal year for H-1B visas starts.

At the same time, the writing has been on the wall for some time now. Since 2017, the Trump administration has tightened its foreign worker visa policy. This has reflected in higher visa rejection rates for most companies. “The numbers have shot through the roof,” said Shivendra Singh, vice president of the global trade department at industry body Nasscom at the time. The high (denial) rates and request for evidence (RFE) are impacting the ability of Indian companies to service clients in the key US market besides making it more expensive, he added.

In a statement put out on Tuesday morning, Morgan Stanley noted that the impact on IT companies may be limited.

This is because many Indian firms have stepped up local hiring efforts over the last few years — in 2017, Wipro announced that 50% of its employees based in the US were locals or American citizens — but also because the COVID-19 pandemic and the ensuing travel ban had forced the sector to anyway put in place contingency plans and move more work offshore.

Has India not lobbied against this? Are American tech CEOs, whose companies will also be deeply affected, speaking out?

The answer to both questions is – yes. While the Indian IT sector, through Nasscom, has always lobbied against these changes, the H-1B visa issue has also featured prominently in multiple rounds of talks between Washington DC and New Delhi over the past few years.

“As you are aware, the government of India has closely consulted all stakeholders and engaged with the US government on this issue. Prime Minister (Narendra Modi) had taken this up, along with the issue of the totalisation agreement, during the visit of President (Donald) Trump to India in February 2020,” India’s foreign secretary Harsh Shringla had said just a few weeks ago.

This doesn’t appear to have had much effect, with the Trump administration clearly banking more on the fact that it hopes its tough immigration stance will appeal to voters ahead of the US presidential elections later this year.

A few tech industry CEOs in America have spoken out against this step, the most prominent voice being Google’s Sundar Pichai.

“Immigration has contributed immensely to America’s economic success, making it a global leader in tech, and also Google the company it is today. Disappointed by today’s proclamation – we’ll continue to stand with immigrants and work to expand opportunity for all,” Pichai tweeted out today morning.

Other business leaders like Elon Musk have also voiced their displeasure with the Trump administration’s decision.

Very much disagree with this action. In my experience, these skillsets are net job creators. Visa reform makes sense, but this is too broad.

Note: This article has been updated to clarify the category of people who will be affected by the temporary suspension.