Commerce and external affairs ministries gave the Essar boss official letters to help convince the court that he be allowed to travel. 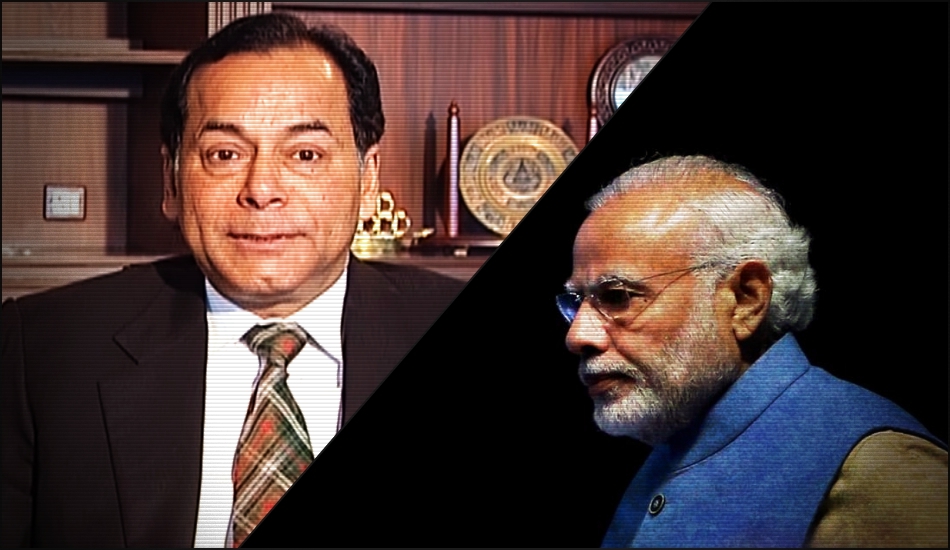 New Delhi: The Bharatiya Janata Party may have used the 2G spectrum controversy to drive home its charges of corruption against the Congress-led UPA in the 2014 election but that has not stopped the Modi government from providing documentation that helped the Essar Group’s Ravikant Ruia – currently facing trial by a special CBI court in a case arising from the scam – secure permission to travel abroad to Russia and Switzerland.

In one of these instances, court documents show, the Central Bureau of Investigation (CBI) may have improved Ruia’s chances of getting permission from the court by curiously not opposing an application he filed to travel abroad in late 2015 – a trip that saw the Essar vice-chairman accompany Prime Minister Narendra Modi along with other Indian CEOs for the India-Russia Annual Summit in late 2015.

Ruia, along with Loop Telecom’s I.P and Kiran Khaitan, was in 2011 charged by the CBI with having entered a criminal conspiracy with the intention of cheating the government during the allocation of second-generation (2G) spectrum and licenses in 2008. The Essar Group has strongly denied the allegations and charges.

Although the Essar boss was granted bail by the special CBI court right after the charges were framed, he, along with other accused,was asked to surrender his passport; for foreign trips, he is required to petition the court and seek permission to travel abroad. The court is likely to pronounce its verdict in three cases arising from the 2G spectrum controversy next week, on December 21.

Before December 2015, on a number of occasions, the CBI opposed in open court applications filed by Ruia that were aimed at securing permission to travel abroad.

For example, in April 2015, when the Essar boss sought permission to travel to Russia, the CBI opposed his plea, arguing that if permission was granted, the accused “may misuse it” and that the application was aimed at wasting the court’s time.

Although special CBI judge O.P. Saini granted permission for Ruia to travel at the time, he added that the “accused is repeatedly filing such applications in a casual and cavalier manner” and that if the Essar vice-chairman continued with such applications the CBI would be at “liberty to take steps seeking cancellation of his bail.”

However, on December 16, 2015, when another application – seeking release of Ruia’s passport and permission to go abroad from December 19 to January 6 was filed in the special CBI court in Delhi – the CBI counsel chose not to oppose.

The lack of opposition was surprising considering it seemed like a routine application – applications that had been filed many times in the past, often allowed by Saini, but still nevertheless opposed by the CBI.

However, court documents show that the manner in which this application unfolded was different for two reasons.

Firstly, the crucial and, as it later turned out, clinching reason behind the plea was reflected in Ruia’s claim, made in writing as part of his application, that between December 23-25, 2015, he would be “part of the Indian prime minister’s delegation on state visit to Russia”

At the time, Prime Minister Narendra Modi was scheduled to visit Moscow on December 24 for the India-Russia annual summit, a visit which he did undertake. After Modi’s trip, Ruia planned to visit Athens, Greece for a family holiday. From Greece, he planned to travel to London and then touch down in Dubai for a day (January 6, 2016) again for a “holiday with family”.

However, Ruia’s application was challenged by Supreme Court-appointed special public prosecutor Anand Grover on the grounds that it was “not supported by any valid documents.”

As a response to this, to support the Essar Group’s promoter claim that he would be part of Modi’s delegation to Russia, Ruia’s counsel submitted in court a one-page letter sent by commerce ministry secretary Kalpana Awasthi to Ravi Ruia.

This letter – a copy of which has been accessed by The Wire – informs Ruia of Modi’s visit to Moscow for the 2015 India Russia Annual Summit and states that he has been “nominated among select others… to represent Indian business and industry in the proposed interactive session on 24th December, 2015.”

“In view of your personal leadership and substantive business engagement with the Russian Federation, your participation in the interactive session is being warmly solicited to enrich the discussion,” says Awasthi’s letter, which was sent on December 16, 2015.

December 16, 2015, incidentally, was the same day that Ruia filed his application with the special CBI court.

The 2015 trip to Russia wasn’t the only time the Centre helped facilitate Ruia’s trips abroad. Weeks later, letters to Ruia sent by senior Ministry of External Affairs (MEA) officials were produced in court to help secure permission for a trip to Switzerland.

On January 19, 2016, Ruia filed a plea, this time to travel to Davos, for meetings with “VTB Bank regarding the foreign investment into India by Rosneft”, a move that he claimed was supported “by the government of India”

Again, to buttress this claim, Ruia’s counsel submitted a letter dated January 18 – one day before he filed the application – sent by MEA joint secretary Santosh Jha to Ruia.

Jha’s letter references a message sent by Rosneft to India’s acting ambassador to the Russian Federation G. Balasubramanian and another letter sent by Balasubramanian to the MEA. The latter talks of a “request from Rosneft seeking the assistance of the mission to facilitate a meeting between Mr Ravi Ruia of Essar and VTB Bank in Davos”

“Rosneft and Essar is (sic) working with VTB Bank for finalising the investment structure. We understand VTB Bank has requested a meeting with Mr Ravi Ruia… We also understand that Mr Ravi Ruia is yet to confirm his travel to Davos to attend the said meeting as he is pre-occupied with some other proceedings,” Rosneft’s letter to Balasubramanian, signed by the company’s head of merger acquisitions Artem Matyushok and dated January 18, 2016 says.

Jha’s letter to Ruia attaches both Balasubramanian and Matyushok’s correspondence and notes that the meeting is “requested in the context of talks between Rosneft and Essar for supply of crude oil from Russia to India” and that another potential issue of interest would be “Rosneft’s plans of a 49% equity investment in Essar’s Jamnagar refinery”.

His letter goes on to state that the mission recommends that the meeting may go ahead in the interests of cooperation between India and Russia.

“The mission has recommended that the meeting may be agreed to as proposed by Rosneft as it would help strengthen bilateral cooperation between India and Russia in the field of energy,” says Jha’s letter.

Questionnaires sent to Jha and Balasubramanian – asking whether the MEA knew their letters recommending the Rosneft meeting would be presented in open court as part of Ruia’s application – went unanswered and this story will be updated if and when a reply is received.

In his travel abroad application dated January 19, 2016, Ruia notes that “grave prejudice and harm will be caused to the application and possibly to the national interest” if he is not granted permission to travel to Davos, Switzerland.

The Essar boss had also, as part of his application, attached a copy of his round-trip air ticket from Mumbai to Zurich, with the tickets having been booked on January 10, nine days before his application was formally submitted.

Interestingly, this time around while the prosecution did not file any written reply to the application, the CBI counsel “seriously opposed” Ruia’s plea in court, stating that the “documents [submitted by Ruia] are not clear and appear to have been obtained by hand from the concerned quarters to facilitate the travel of accused abroad.”

In response to a questionnaire sent by The Wire, an Essar Group spokesperson replied with a one-sentence statement: “All relevant laws and procedures have been followed in respect of Mr. Ruia’s travel abroad.”

Past performance is no guide to the future

India has had a long and fraught history with businessmen accused of involvement in criminal cases travelling abroad. In 2014, the Madras high court, in response to a plea by one K. Zahir Hussain, an accused charge-sheeted by the CBI, ruled that the ‘right to travel abroad’ is subject to certain limitations.

In a curious development, Ruia’s applications after the January 2016 have largely been refused. In February 2016, Saini dismissed a plea from the Essar boss asking to travel to London from February 7 to March 14, and stated that the allegations against him were of a “very serious nature” and that he had nothing substantive to do in the United Kingdom.

In September 2016, the Supreme Court rejected another plea from Ruia that he be allowed to travel abroad. This came on the back of CBI objections that if the Essar chief was allowed to go and not return, it would be difficult to bring him back to India as he was a non-resident Indian (NRI). The trial court too had denied approval in this case. While rejecting his plea, the Supreme Court noted that until final arguments in the case finished, it would not allow Ruia to travel abroad.

The acquisition of Essar Oil – a $13-billion deal which saw it being bought by a consortium led by Russia’s Rosneft and which included the sale of a 20 million-tonnes-per-year Vadinar refinery and port in Gujarat to Rosneft – has had a bit of a winding history.

In July 2015, Rosneft (led by its boss Igor Sechin) and Ravi and Shashi Ruia signed a preliminary deal and entered into exclusive talks. However, it was far from a sure thing and ran into problems a year later, primarily because of interest expressed by Saudi state energy firm Aramco.

Reuters later reported that the Rosneft-Ruia deal “appeared dead in the water” by mid-2016 but was eventually salvaged by the “involvement of Russian President Vladimir Putin and Prime Minister Narendra Modi, who were keen for it to go through”.