The Reliance head said that the partnership between Jio and Facebook will "actually demonstrate that it is great for India, Indians, and small Indian businesses". 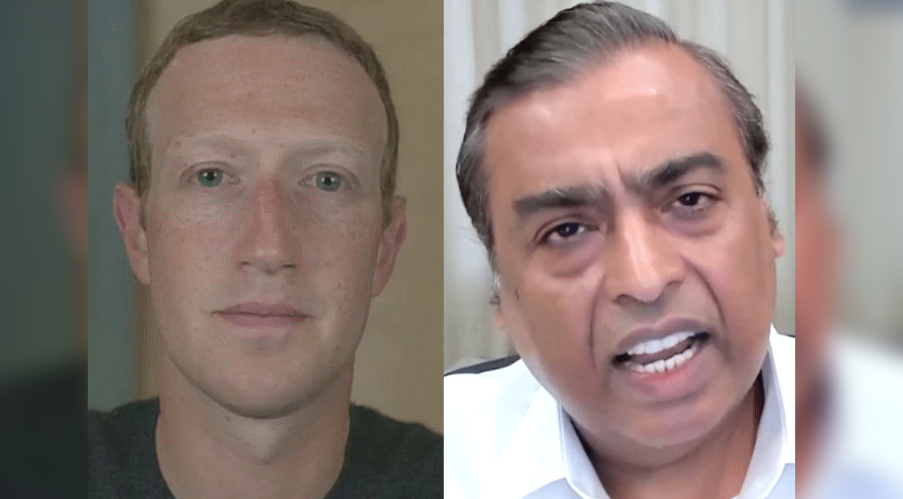 New Delhi: Facebook co-founder and CEO Mark Zuckerberg on Tuesday said India is a very special and important country with a remarkable entrepreneurship culture, as he sought to push deeper the just-launched payments services that allow users to make payments over WhatsApp.

“We just launched WhatsApp payments in India last month – now you can send money to your friends and family through WhatsApp, as easily as sending a message. That was possible because of the UPI system that has been built in India,” Zuckerberg said during a fireside chat with Reliance Industries Chairman Mukesh Ambani.

He said the Unified Payments Interface (UPI) makes it easy for anyone to instantly accept payments across different apps.

Referring to late Dhirubhai Ambani’s vision of affordable connectivity in the country, Zuckerberg said, “… today Indians can communicate with one another for less than the cost of a postcard and that’s what we’ve tried to do with messaging… and hopefully we can do that together with payments and make it so people can use India’s new UPI system, which I think is just great”.

Following the NPCI approval, WhatsApp has started its payments service in the country in a “graded” manner, starting with a maximum registered user base of 20 million in UPI. WhatsApp – which counts India as its biggest market with over 400 million users – will compete with players like Paytm, Google Pay, Walmart-owned PhonePe and Amazon Pay in the country.

“I have no hesitation in going on record, that it is your investment that set the ball rolling. Not only for Jio, but for the Indian FDI which has been the largest-ever in its history,” Mukesh Ambani said.

He added that the partnership between Jio and Facebook will “actually demonstrate that it is great for India, Indians, and small Indian businesses”.

“And I believe Mark, that our actions will speak louder than our words in the coming months and years,” Ambani said.

Ambani stated that technology, with all the digitisation steps that India has taken, will democratise wealth and value creation for individuals and small businesses.

“This means Jio brings digital connectivity, WhatsApp now with WhatsApp Pay brings digital interactivity, and the ability to move to close transactions and create value, and Jio Mart brings the unmatched online and offline retail opportunity, that gives our small shops which exist in villages and small towns in India, a chance to digitise and be at par with anybody else in the world,” he added.

Zuckerberg said India has introduced a lot of innovation in areas like education and financial inclusion, and that decisions taken here, shape global discussion about how technology can drive more economic opportunity and better outcomes for people and businesses.

He said India is an important country for the social media giant and many of the new features rolled out in its various products are tested here first.

“India is building local capabilities and tech capacity to power innovative new business models and provide Indian citizens access to digital and financial inclusion. So, the decisions that are made here, they shape global discussion about how technology can drive more economic opportunity and better outcomes for people,” he said.

Zuckerberg also said that a lot of Indian organisations are leading the way in using technology to build safer communities, and more inclusive financial systems.

“Whether it’s in social commerce or education or financial services, there is a lot of innovation that happens here. And we are proud to partner with some of the teams that are working on these important challenges… India is a very special and important country for us,” he said.

Saying that millions of Indians use its products (Facebook, Messenger, Instagram and WhatsApp) every day to stay connected, Zuckerberg said millions of small businesses across the country are using WhatsApp Business and Messenger to reach customers manage orders and grow their businesses.

“… we are in the business of serving small businesses and nowhere is this more true than in India. This is especially important because small businesses here will be a key part of the global recovery going forward. And we’re focused on making sure we build the best tools for them,” he added.

He also said the company is focussed on ensuring that technology “delivers for everyone” and that was one of the reasons for partnering Indian telecom major Reliance Jio that has “played such a key role in giving hundreds of millions of Indians access to the benefits of the internet” and fostering this entrepreneurial culture.