What is required is to use the notion of sustainable development to benchmark all growth machine induced policies and programs. 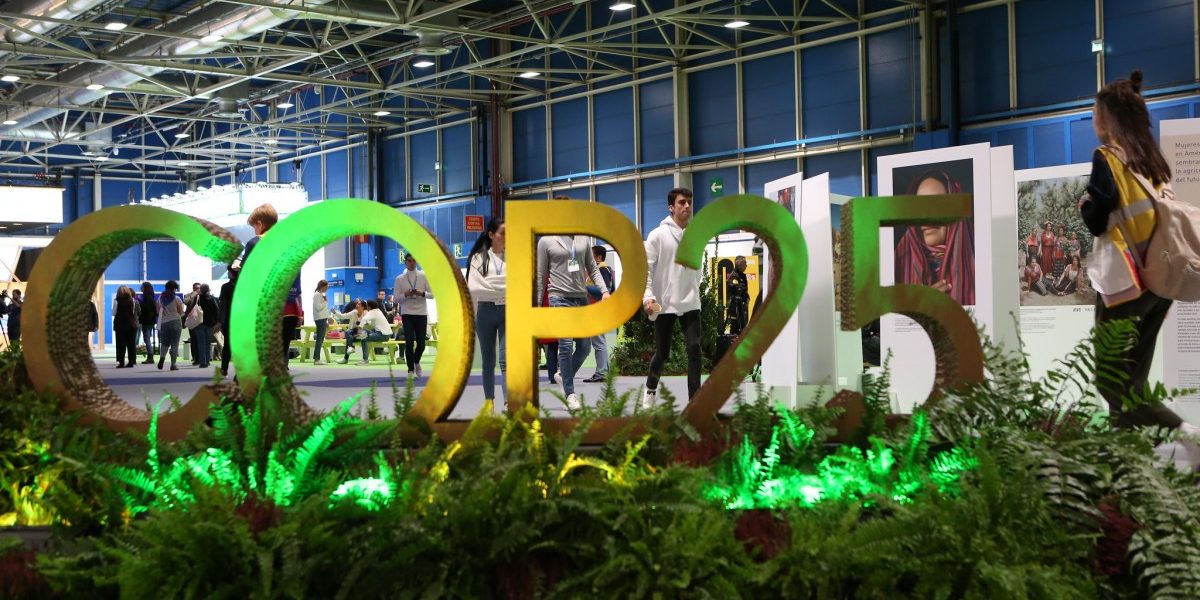 At the venue of the COP25 summit. Photo: mitecogob/Flickr, CC BY-NC 2.0

Admittedly, increasing uncertainty in climatic patterns has its origins in glocal (global + local) factors. The present version of globalization has promoted intra-industry trade that has led to a convergence of incomes among trading partners.

A major part of the Indian and Chinese growth story is also explained by increased access to intra-industry trade. Modernization of production technology permitted production processes to be split to be located in different parts of the world, and China benefited. On the other hand, outsourcing of services due to advances in information technology was advantageous to India because service outsourcing, unlike free trade earlier, had the potential to equalize “non-tradables” (e.g. wages). Services in the developed nations command high wages, and the advantage of high wages could only be enjoyed by physical migration to the high-income countries, which was available to a few only. Now, software professionals produce services in India and are paid high wages without actually shifting to high-income countries. In turn, high wages earned by software professionals has led to market demand for products, similar to the products consumed in developed nations, thus, accelerating intra-industry trade with multiplier effects on job creation and income enhancement.

As a result, consumption increased in geometric proportions – what took consumption the UK in 100 years and the US 50 years has happened in less than half a century in China and India – and the most deleterious effect has been on biological capital. Earlier biological capital (e.g. soil, water and oxygen and freely available for human use) had a chance to recuperate because consumption was concentrated in one part of the world and among one set of people. Globalization of biological capital has impaired the ability of the Earth to act as an effective sink and one consequence is the extraordinary levels of carbon dioxide, resulting in climatic uncertainty and instability.

At the local level, the idea of growth at any cost has led to the formation of growth machines. Typical machines manufacture products efficiently and consist of moving parts that accomplish production goals efficiently, add value to inputs, and overcome resistance at one point by applying force at another point (leverage). Similarly, the growth machine produces high levels of consistent economic growth and the organization consists of groups of industrial firms, local businesses, realtors, business organizations, and the “entrepreneurial state”. The growth machine also adds value, efficiently, to land by erecting new structures – tourist facilities anywhere, river dams, hydro-electric power projects.

The Government has become an entrepreneur and pro-actively promotes business activities through regulatory and planning support, institutionalizing pro-growth strategies and practices and promoting connections through intermediaries. This promotion of business activities occurs within a broader vision of public interest. Moreover, the entrepreneurial state attracts “footloose capital” by a slew of incentives and benefits to boost economic development. Finally, the attitude of the local officials is also focused on growth “partly because most accept the dominant ideology of growth, partly because some may personally benefit from increases in land rents”. Therefore, the dominant theme of the glocalization is that “growth feeds upon growth” and has put the notion of sustainable development on the back-burner.

What is required is to use the notion of sustainable development to benchmark all growth machine induced policies and programs. One way of making the idea operable is to use the sustainability triangle to achieve dual positive outcomes. The sustainability triangle consists of 3Es (economic development, equity, and environment preservation) represented by three corners of a triangle and the purpose of policy design is to reach, the centre, as much as possible. The 3Es interact with one another in complex and unknown ways and the complexity creates interdependence making prediction difficult. Moreover, in order to prevent gaming and cronyism, another recently added E, ethics, becomes important.

Simply, policy design has to include an evaluation of the winners and losers, among the 3Es, and informed, knowledgeable decisions made. Importantly, sustainable development goes beyond existing paradigms that are founded on either/or terms, such as environmental degradation has to be ignored during the process of economic development, the poor cannot wait for delays caused by including environmental concerns in programs.

However, this leads to zero-sum outcomes. What is required is a new paradigm that produces triple-positive outcomes. Identifying elements of this new paradigm is one key agenda for the COP25.

Sameer Sharma has a Ph.D. from the USA and a DLitt from Kanchi University. The article is based on his research and practice and views are personal.