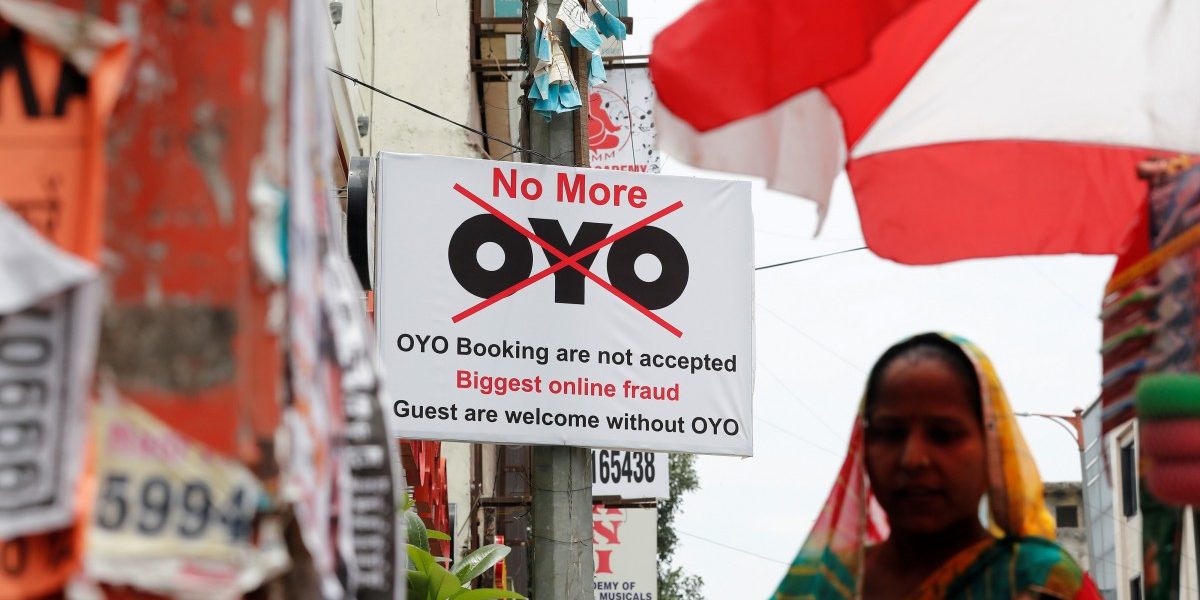 A woman walks pasts a sign against Oyo, placed outside a hotel in New Delhi, August 7, 2019. Photo: Reuters/Adnan Abidi/Files

Bengaluru: India’s Oyo Hotels and Homes shot out of nowhere to become one of the world’s largest hotel chains with a simple promise of “hassle-free” online booking, transparent pricing and cheerful lodging.

But as the Softbank-backed startup pushes toward profitability, an increasing number of Indian hotel operators who have partnered with it are complaining about being blindsided by fee increases.

The backlash against Oyo – while limited to a small share of the more than 10,000 hotel owners in India who work with it – comes at a crucial time for an emerging-market unicorn valued at $10 billion and its major investor.

Softbank, which has invested nearly $1 billion in Oyo, through its Vision Fund, is struggling to raise funding for a second investment fund in the wake of the failed offering of office-rental company WeWork and amid questions about the path to profitability of other marquee investments like Uber . Oyo has not yet turned a profit.

In the background of the discontent is the disruption Oyo has brought to India’s lodging market – often to the delight of India’s middle-class travellers and to the dismay of hotel owners who have seen room rates driven down at a time when economic growth has slowed.

Oyo charges hotels a roughly 20% franchise fee on room revenues when hotels join its network, but some Indian hotel operators say the startup often ends up taking half or more of revenues through fees that were not initially disclosed.

A group representing hotel operators in Bengaluru called for a criminal probe into Oyo last month, saying the company was withholding money because of unfair fee increases.

Agarwal successfully appealed to the Karnataka high court for a stay order on one case in Bengaluru, the court website shows, and a police official said the order barred police from investigating.

In the other complaint, in the town of Chikkamagaluru, police are investigating, an official there said.

Oyo has denied the allegations and said Agarwal declined comment on the legal complaint. The company said it operates with a high level of “integrity, transparency and commitment” with its partners.

Agarwal said hotel operators who have raised complaints represent a tiny fraction of Oyo‘s network and were seeking to drive prices higher at the expense of consumers.

“On an annual basis, Oyo is able to retain 99% of its asset owners. If, for instance, people were unhappy, our retention rate would have been lower,” he told Reuters.

Softbank, which owns a roughly 45% stake in Oyo, declined to comment. 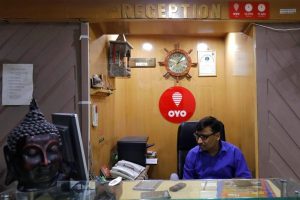 An employee sits next to the logo of OYO, India’s largest and fastest-growing hotel chain, at the reception of a hotel in New Delhi, India, September 25, 2018. Photo: Reuters/Anushree Fadnavis

Oyo says it is in constant contact with its hotel partners. “We have always disclosed any changes applicable to contracts with asset owners,” Oyo said in a statement.

For their part, owners and managers say Oyo has introduced fees – including a “platform fee” and a fee for a “visibility boost” – which they only discovered in monthly statements.

Reuters interviews with 22 hotel owners and managers who run hotels under the Oyo brand in 10 Indian cities suggest that the discontent has grown since late last year.

“The situation with Oyo has gone from bad to worse,” said P.C. Rao, president of the Bruhat Bangalore Hotels Association. “We want to make sure the business of small hoteliers isn’t hurt.”

Some hotel operators say Oyo continued to list their properties on its mobile app with a “sold out” banner after they asked Oyo to sever ties.

Three hotel operators in Ahmedabad said they had e-mailed Oyo representatives on September 23, asking to be removed from the platform but received no response. Reuters found all their properties still listed on Oyo‘s app with “sold out” messages even though the hotels had rooms available.

Oyo says once a hotel has served a 30-day notice period and accounts are settled, the property is typically delisted within 72 hours. It tags all properties serving their notice period that may deny check-ins to customers as “sold out“, the company said.

‘It isn’t something Oyo can ignore’

Founded in 2013, Oyo started by aggregating bookings for India’s budget hotels, promising a standard of service in a market where that was more often the exception. Oyo has expanded to China, Europe and the United States, calling itself the world’s fastest growing hotel chain.

Many hotel owners in India were upbeat when Oyo gave properties in smaller cities visibility but began to raise concerns when profits failed to improve, said Darshini Kansara, a hospitality industry analyst at CARE Ratings in Mumbai.

“It isn’t something Oyo can ignore as they look to capture more market share.”

Based in Gurugram, near New Delhi, Oyo signs up hotels as franchisees by re-branding them and upgrading amenities and then charges fees from the owners.

Oyo says hotels are updated on any new contract terms on a tablet-device at the hotel that Oyo provides to manage bookings.

But some hotel owners say the devices are operated by junior staff, leaving them in the dark until fees have been charged. Ashraf Ali, a hotelier in Mumbai, said a notification offering new terms would keep showing up on the tablets until the hotel employee hit accept.

Bengaluru hotelier Vikrant Singh says his 50-room hotel swung from making monthly profits of nearly $7,000 in late 2016 to a loss of more than $2,000 this January. He blames Oyo for the reversal.

“Our profits went down due to the high commissions Oyo was charging,” said Singh, who withdrew his hotel from Oyo in March.