In a statement filed with the BSE, NDTV said that "this exercise of rights by VCPL" was done without any prior intimation or conversation with the company's promoters. 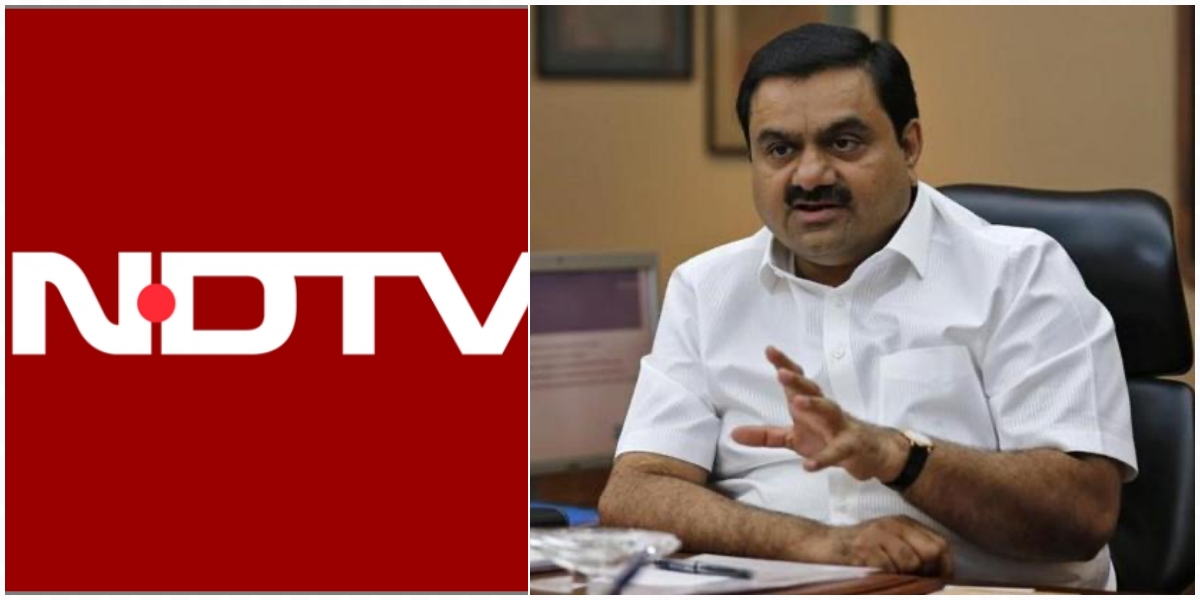 The logo of NDTV and Gautam Adani. Collage: The Wire

New Delhi: The Adani Group said on Tuesday its media unit will buy a majority stake in NDTV after indirectly acquiring 29.18% of the television channel, which the promoters of the company said was done without consent or notice.

Adani’s indirectly bought a 29.18% stake in New Delhi Television Ltd and said it will launch an open offer for another 26% stake. The open offer would be worth Rs 493 crore ($61.73 million), according to a press release issued by the company.

Earlier on Tuesday, Adani said it bought Vishvapradhan Commercial Pvt Ltd (VCPL) for Rs 114 crore. VCPL owns warrants of NDTV shareholder RRPR and on Tuesday exercised its rights to convert those warrants into shares amounting to 99.5% of RRPR.

Is this indirect acquisition of NDTV?

VPCL gave loans to promoters and right to convert loans

“RRPR is a promoter group company of NDTV and holds 29.18% stake in NDTV,” the Adani Media Networks Limited (AMNL) press release said further, adding that VCPL, along with AEL and AMNL, will launch an open offer to acquire up to 26% stake in NDTV in line with regulations set by the Securities and Exchange Board of India (SEBI) in 2011.

The release further carried a statement from Sanjay Pugalia, CEO of AMNL. “This acquisition is a significant milestone in the journey of AMNL’s goal to pave the path of new age media across platforms,” the release quoted him as saying.

“AMNL seeks to empower Indian citizens, consumers and those interested in India, with information and knowledge. With its leading position in news and strong and diverse reach across genres and geographies, NDTV is the most suitable broadcast and digital platform to deliver on our vision. We look forward to strengthening NDTV’s leadership in news delivery,” it continued.

In a statement filed with the BSE, NDTV said that “this exercise of rights by VCPL” was done without any prior intimation or conversation with the company’s promoters.

VCPL served a notice without any discussion with the founder-promoters stating that it (VCPL) has “exercised its rights to acquire 99.50% control of RRPR Holding Private Limited (RRPRH), the promoter-owned Company that owns 29.18% of NDTV”, the statement says.

The Adani Group had made its first foray into the media business in March this year when it acquired a minority stake in Quintillion. Prior to that, in September last year, Pugalia, who was president of Quint Digital Media, the parent company of Quintillion, was made the CEO of Adani Media Ventures.

On NDTV, the AMNL release says that the broadcaster is “a leading media house which has pioneered the delivery of credible news for over three decades,” before going on to talk about the company’s three channels – NDTV 24×7, NDTV India and NDTV Profit – as well as its “strong” online presence.

Adani Group has seven publicly listed companies which are in businesses such as operating airports and ports, power generation and transmission, coal and gas trading.