With the 2G Scam Having Served its Purpose, Will Modi Back His Anti-Corruption Bluster with Action?

The real test of Modi's will to fight corruption will be to hold the CBI responsible and ensure it appeals against the judgment of the Patiala house court in a higher court. 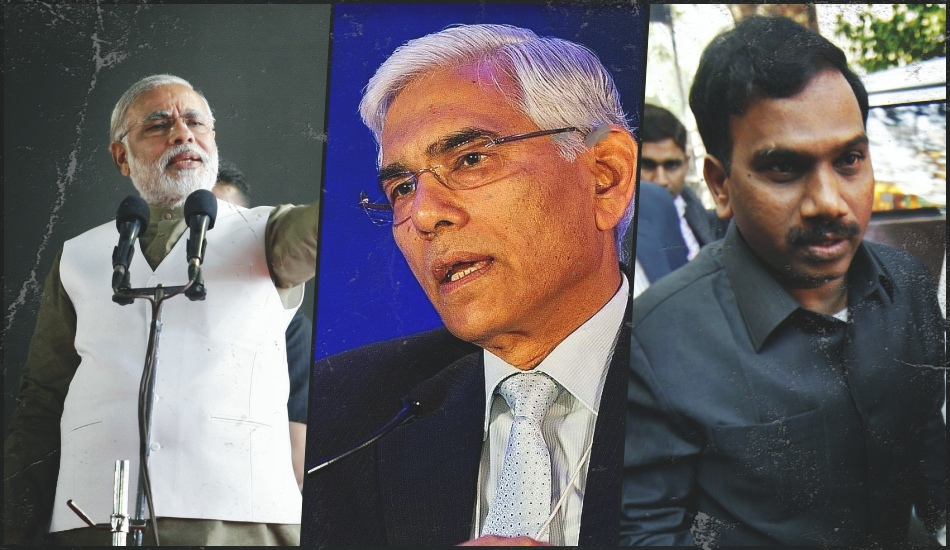 As all 2G accused are acquitted, everyone from the CBI prosecution teams to Vinod Rai should be questioned and held accountable. Credit: PTI, Reuters

So the Bharatiya Janata Party won the 2014 general elections and Narendra Modi rode in to Delhi on a white charger as the scourge of corruption cases – the mother of all cases being the 2G scam.

Three and a half years later, special judge O. P. Saini, who enjoys an impeccable reputation, ruled “I have absolutely no hesitation holding that the prosecution has miserably failed to prove any charge against any accused”.

So A. Raja, Kanimozhi and a host of telecom executives and promoters got a clean chit as the court virtually ruled that there was no 2G scam as the CBI managed to provide no prosecutable evidence to the court.

Like Saini, I have no hesitation in saying that the caged parrot, the Central Bureau of Investigation (CBI), conducted a shameful investigation. It made Anil Ambani a witness for the prosecution who then conveniently suffered a ‘memory loss’ (read his deposition here). It refused to declare him a “hostile witness” for reasons which are still unknown.

As Ambani displayed his amnesia – he confirmed his signatures on many company documents but feigned ignorance about decisions he put his signatures on – questions should also be asked to the-then Comptroller and Auditor General Vinod Rai who mysteriously uncovered scam after scam in the telecom and coal sectors.

Remember the figure of 1.76 lakh crore which he declared was what the 2G scam cost the country? Rai should shoulder a portion of the blame along with the CBI for devastating the telecom sector.

Will Rai answer for his “notional loss”? Rai, like other former government officials such as national security advisor Ajit Doval may have aided the electoral advent of the BJP. Normally, post-retirement C&AG chiefs do not accept any sinecures. Rai broke the norm as Modi appointed him to head the Banks Board Bureau.

Rai should have egg on his face but despite Manmohan Singh calling it a “massive propaganda against his government” and the-then telecom minister Kapil Sibal calling it the “Vinod Rai scam”, the former audit chief has maintained a studious silence.

In the run-up to the 2014 elections, Modi latched onto the coal and telecom scams and the BJP made UPA’s crony corruption an issue. It seems that corruption was yet another “jumla” for Modi as the so-called cronies targeted by BJP are alive, kicking and flourishing under him. Anil Ambani who has defaulted on his loans – domestic and international – has been given a plum contract in the Rafale defence deal.

So much for Modi being the scourge of crony capitalists. Despite Modi’s claim of empowering the CBI, it remains as dutifully “incompetent” as ever especially when those accused are billionaires and politicians. In matters of India Inc, politics always prevails and subverts justice. The CBI has an embarrassing track record with zero conviction against any politician, cutting across party lines as well as big business players.

Modi had no hesitation in embracing Dravida Munnetra Kazhagam supremo M. Karunanidhi on a recent trip to Chennai after railing against his and the UPA’s corruption and making it a main electoral plank in 2014.

The real test of Modi’s will to fight corruption will be if the CBI appeals against the judgment of the Patiala house court in a higher court. Early indications are that it is unlikely as former attorney general Mukul Rohatgi, who was the final authority as the government’s official prosecutor while in office, hailed the verdict and said it was legally sound. Rohtagi was defending some of the accused before the BJP came to power and he became AG.

What India needs is institutional accountability to end this farce of the rich famous and well connected getting away with loot in India. The CBI officials who failed to prosecute the case should ideally be sacked.

This scam was investigated and trial conducted under Supreme Court monitoring. The apex court therefore may also want to take a suo moto view of the manner in which prosecution may have compromised the trial.

After all, one upright government prosecutor who knows how the trial was conducted is a judge of the Supreme Court. This has indeed now become a question of credibility for India’s criminal justice system. But don’t hold your breath, the 2G scam has served its purpose by helping the BJP come to power. After this, it appears as if its business as usual.

The Anil Ambani group has clarified in response to this article that RCom has not defaulted on its loans. Its statement to The Wire is reproduced here:

The truth of the matter is quite to the contrary, RCOM announced at a press conference on 2 June 2017 that is going into an RBI-defined SDR plan, which involves a standstill on interest and principal payments on all loans for a period of 18 months, as per RBI norms. All related developments are completely in keeping with set guidelines and regulations.

At another press briefing on 30 October 2017, RCOM announced a zero debt write-off plan, wherein all dues would be paid off in full to all lenders by selling off key assets owned by the company, under the supervision of the Joint Lenders’ Forum. Such an announcement is unprecedented in the history and annals of Corporate India.

As far as Reliance’s tie-up with Dassault Aviation is concerned, the statement made is utterly wrong and incorrect, and only just goes to portray the complete lack of awareness on the part of the author on this subject. Reliance has formed a Joint Venture with Dassault Aviation – Dassault Reliance Aerospace Ltd (DRAL) for discharge of offsets for 36 Rafale aircraft as an Indian Offset Partner (IOP). Dassault is a global leader and has 49% stake in DRAL, providing the best experience required for the proposed projects to be undertaken by the JV co. The joint venture between Reliance Aerostructure Ltd and Dassault Aviation is a bilateral agreement between two companies. Dassault Aviation  selected Reliance Aerostructure Ltd as its joint venture partner. The Indian government has no role to play in this. As per the government policy issued on 24 June 2016, it allows for 49% FDI in the defence sector under the automatic route, without any prior approval. Dassault Reliance Aerospace Ltd will be only one of the key players in the discharge of offset obligations.