Interview: 'To Be a Woman in This World Is to Cope with with Some Form of Violence'

Set in New Delhi, Damyanti Biswas' 'You Beneath Your Skin' debut crime thriller delves deep into a dirty and realistic world of misogyny, corruption, poverty and acid attacks.

Flaws make up the crux of Damyanti Biswas’ debut novel You Beneath Your Skin, a crime novel that delves deep into a dirty and realistic world of misogyny, corruption, poverty and violence.

Set in New Delhi, the book rests on the phenomenon of acid attacks in India – in it, several women who have been gangraped are found stuffed into garbage bags in various corners of the city with acid poured on their faces and bodies.

Countless women have been brutalised with acid in India, which till was sold freely till 2013 and is still not that hard to obtain. In fact, just in June 2019, a Human Rights Law Network survey found that acid is being sold openly for as little as Rs 40 a bottle across Delhi-NCR despite regulations set in stone by the Supreme Court in 2013. For survivors, the fight for justice is a long and hard battle – while India has the highest number of acid attacks in the world, it also has the worst conviction rates.

But the crime thriller goes beyond telling the story of the violence women in face. Bringing Delhi to life from top down, it is the complex relationships that are truly centrestage. The story is anchored by Anjali Morgan, an Indian-American mother, who navigates a series of complex relationships and trauma while being tossed into a dangerous scenario by an investigation into the murders.

In an interview with The Wire, Biswas, who has volunteered with Project Why, an organisation that supports underprivileged women and children, and the Stop Acid Attacks campaign, lays out how the book came together, why it’s not a simple ‘whodunnit’ and the role skin had to play in shaping it.

The underlying theme of your debut novel is violence against women. Can you tell me a bit about the process of writing You Beneath Your Skin? What was the spark of inspiration that led you down this rabbit hole?

The spark was Anjali. She appeared time and again in my writing. At first she was a disembodied voice, then an Indian-American mother, then I discovered she was a single mother to her special needs son. The more I wrote her, the more real she became: conflicted, having an affair with a  married man, torn by guilt but unable to cope with her loneliness, insecurities and desire. She showed up in Delhi, and then began to negotiate its environs, its smog, its indifference, its misogyny, and violence towards women. I didn’t know what the theme of You Beneath Your Skin was until it was finished.

I believe that to be a woman in this world is to cope with violence in some form and extent, so a realistic novel set in New Delhi was bound to contain mention of violence against women. That said, men in this novel are also violent to each other.

The writing process was utterly unromantic, back-breaking, heart-breaking work with endless rejections and edits. I rewrote the novel 15 times, and those were just the re-writes. I also did about 15 other edit drafts – most of them self-driven, even after my agent and editor had okayed the work. Like my agent says, I need to learn to stop tinkering. 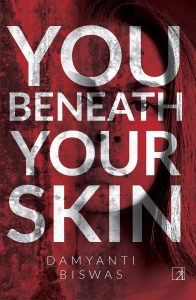 You Beneath Your Skin
Damyanti Biswas
Simon & Schuster, 2019

Did you intend for the book to be a page-turning thriller about acid attacks from the outset?

At the outset, way back in 2012, I didn’t know what I was writing other than the fact that ‘skin’ was always a part of it. Peeling back skin, looking under the skin.

That has gone into the title, You Beneath Your Skin.

I had Anjali, her son Nikhil, and her lover Jatin, and began to write about their world. Only in a later draft did the novel begin revolving around acid attacks. I didn’t know it was a thriller at all – I wanted pace, for one thing to lead to another, and for it all to fit well together – I didn’t realise it was a thriller till someone called it one. It is not a conventional thriller where plot and pace take precedence – in this one, the characters are paramount.

The story is hard hitting about the reality of acid attack survivors. The problem is particularly persistent in India and even though the sale of acid is more regulated, attacks have continued well into 2019. What led you tell the story of these women – women who have been scarred in countless ways in a world where  corruption and elusive justice go hand in hand?

Acid attacks became a part of the novel quite by accident. I was writing about women being violated, which they are on a daily basis in Delhi and many other cities in this world, but for the plot, I needed something that was very visible, something you could not ignore. Acid attack was violence against women made visible.

Being obsessive about research though, I met acid attack survivors before I wrote them into the plot. Once I spoke with them, it became clear to me that I could not skim the surface, that the story had much more to it, and needed to be told.

There were many struggles, but the hardest was with myself – I did not (and still do not) feel that it was my place to tell the stories of acid attack survivors. I listened to accounts, spoke for hours over the phone, read biographies and autobiographies, spiralled into depression for a few months. I wanted to get it as right as I could. Once I was inside of it, there was no getting out.

You’ve described the book as a ‘whydunnit’ and not a simple ‘whodunnit’. Having read the book, an educated guess midway points to the villain but the book doesn’t necessarily lose steam. Why pick this route instead of the customary reveal-all at the end?

In my writing, I use crime as a scalpel with which to make an incision. When a crime is committed, our personas slip. Relationships, and our entire society unravel, and the underlying truths are revealed. I was not writing a thriller, so I have not followed its tropes. It is a story about crime, why it occurs, how it affects the perpetrator and the survivor, and the families of both. The motivations behind crime fascinate me.

All villains, no matter how evil, do not see themselves as such – they are the protagonists of their own stories, they have a reason behind what they do. As well, the heroes in my story have turned out human and real. They have their flaws, insecurities, and failures. It is in some ways also a literary story, preoccupied by the characters and their lives, rather than who does what. Readers bring their own take – many did not guess the ‘villain’ or even care who the villain was – they just wanted to know about Jatin and Anjali.

The whole idea for me was to make the reader care about the characters and then give them an experience of those characters’ lives, and You Beneath Your Skin attempts to do that. Which is why the novel does not stop after the perpetrators are revealed, because that is not the whole story.

Your protagonist Anjali Morgan is an unusual character in many ways, with a complex past, present and future. An autistic son, a troubled relationship with her mother, a shattered marriage and an affair, there are secrets upon secrets and piles of responsibilities. What was the evolution of Anjali?

The unvarnished truth is that Anjali came up in a writing exercise and refused to leave. Each time I wrote her, a new aspect appeared. I tend to carry my characters with me wherever I go, and imagine what they would say or do in a given situation.

I had no idea of her past till I actually sat down and interviewed her, what did she want, and what did she need? What did she believe in? Why was she a single mother in a city she had moved to a few years ago? Why was she having this affair with a married man? Why was her relationship with her parents so difficult? She answered and I noted down the responses.

This will sound funny, but to me, Anjali, and all the fictional characters in the novel are very real, and I expect them to be living their lives even at this moment in the bungalows and by-lanes of New Delhi.

The city itself comes across as a well-fleshed out character – from the infamous halogen lights to ghee-soaked paranthas from dhabas to clogged government hospitals and slums, it’s an immersive experience. Did you have a literary pilgrimage of sorts while writing the book despite having lived here for a time?

The contrast between the rich and poor has always fascinated me, and the way they co-exist, cheek-by-jowl in our cities. My own experiences in the long years in the city shaped the narrative, but I also made a few trips during which I specifically visited all the places described in the book.

I drove on the roads and figured out if the distances and times made sense. I walked the corridors of Safdarjung, and the posh private hospitals. I volunteered in the slums. I ate at the roadside eateries, and I visited the five-stars. I walked the malls, and traipsed beside the uncovered drains in the alleys. I needed to be part of the immediacy in order to create that experience in the book. 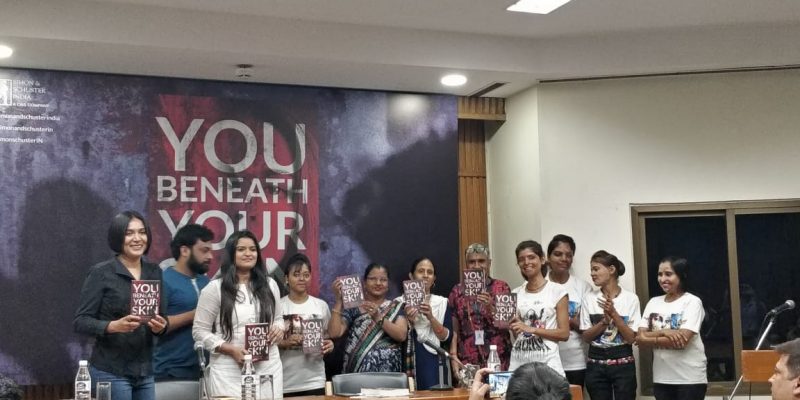 Damayanti Biswas at the book launch for You Beneath Your Skin on September 19, 2019. Photo: The Wire

The Delhi you present is also about the dark underside – from the homes of the most powerful to slum dwellers at the other end of the socio-economic ladder.

I come from a family that got by on enough, but not more. As an NIFT alumni in my previous life, I used to visit underprivileged communities to supervise the embroidery and stitching work done there. My professional experience also included being around fashion ramps, lavish clothes and lifestyles. In Delhi, as in every big city, this contrast is a part of everyday existence for many – seeing all of it from the edges.

Having now volunteered with those who do not have enough for two square meals a day and been around those who would never have enough notwithstanding their oversized possessions, my work speaks of, and to, both.

At the heart of the book are dysfunctional families. Did you have any particular inspiration to create such intertwined relationships?

Having left India many years back, I can see it from the outside and notice that complex family and societal dynamics are a part of who we are as people: we push for those we know, we work with them, we adopt and adapt.

All families are dysfunctional in their own ways, even those that look perfect on the outside. We do not choose our families, but must do our best to maintain good relationships. In itself this creates a lot of tension, which is interesting for any writer.

In a crime story this tension is a goldmine – there are interesting possibilities between capability and recommendation, duty and affection, desire and convention. The complexity of the relationships and of the various stands weaving together is my attempt to present Delhi in as true a manner as possible.

Any other projects you’re working on now that readers should keep an eye out for?

I’m writing a crime novel set in Mumbai around the closure and reopening of dance bars in Mumbai. The protagonists are a bar girl, and a police officer, and of course, the terrible and glorious city of Mumbai.