In the preface to her absorbing biography of Nayantara Sahgal, Out of Line: A literary and political biography of Nayantara Sahgal (HarperCollins, 2014), Ritu Menon observes, “By the time she was thirty-five years old in 1962, Nayantara Sahgal had already published her autobiography, in two volumes. Prison and Chocolate Cake and From Fear Set Free set the tone for most of her subsequent writing – whether fiction, non-fiction, political commentary, essays or monographs – a tone that was uniquely personal, political and literary. These three strands were interwoven in everything she wrote, and just as it is impossible to separate a writer’s life from her text, in Nayantara’s case it would be remiss to read her without reference to the political life of the country.” 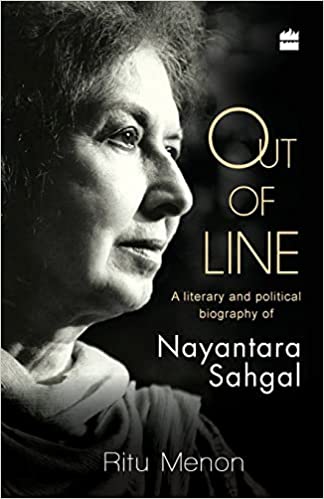 The excerpt below, lightly edited for style, has been taken from Chapter 1, which opens with the marriage of 21- year-old Nayantara Pandit to 25-year-old Gautam Sahgal at her ancestral home, Anand Bhawan, in Allahabad, in 1949, with her ‘Mamu’ Jawaharlal Nehru signing the marriage certificate. With that, Nayantara left “her known world of ‘Gandhi caps and hand-spun cloth for that of European suits and ties…a world where saying, ‘So-and-so was in jail with me’ was like saying, ‘We were up at Oxford together’.” However, within two years of her marriage, Nayantara felt a deep urge to go beyond the domestic; be part of the “life of the country”.

In 1951 she wrote to Nehru, confiding in him her frustration at being just wife and mother, as well as her difficulties, and seeking his advice. Should she join the Congress? Engage in social work? Or, given her circumstances, just write? Nehru replied immediately and sympathetically, encouraging her to do something worthwhile outside the home. “One cannot ignore the domestic sphere,” he said, “but a wider activity gives more meaning to life.” He refrained from telling her what to do, however, remarking only that there were several ways of doing something socially useful. Should she decide to write, her writing should have some purpose. “In the final analysis,” he wrote, “one writes from one’s experience of life. The richer the experience, the better the writing.”

But biology intervened; Nayantara’s second child, her son Ranjit, was born nine months after she wrote to Nehru, and it was only a full year later that she had the time and leisure to pick up her pen.

Prison and Chocolate Cake became that work written from experience, her attempt at capturing the ‘special magic’ of growing up during India’s struggle for freedom as part of a family whose men and women had committed their lives to it. “I knew history would record the struggle,” she has said, but her purpose was altogether different. She wanted to present the “texture of a time, the froth and bubble of a mood or a moment …”, the everyday reality of that struggle and what it meant as she experienced it, to offer a ringside view of history in the making.

There may not be too many opening sentences in a memoir or autobiography as immediately arresting as the following:

Some things will always remain a mystery to me. How did Mummie and Papu have the courage to send us to America in 1943? … Few went as we did, at our age, from a peaceful country on a troop ship at the height of war.

‘We’ were Nayantara, then 16, and her older sister Chandralekha, 19, headed for the US and Wellesley College in Massachusetts, on an ocean journey that would take several weeks. The year was 1943 and India was part of Britain’s war effort, while at the same time resisting British imperialism and demanding that they quit India. It would have taken an extraordinary set of circumstances for any parent to dispatch two teenaged girls, un-chaperoned, to a country several thousand miles away, while a war was in progress.

And the circumstances were indeed extraordinary. On August 8, 1942, the All-India Congress Committee passed its Quit India Resolution in Bombay, and on August 9, Gandhi, Azad, Patel, Nehru, Sarojini Naidu and other members of the Congress Working Committee were arrested and taken by a special train to Poona. The AICC office at Swaraj Bhawan was sealed yet again by the police, and because it was only a matter of time before she, Chandralekha, Indira and Feroze Gandhi were also arrested, Vijaya Lakshmi Pandit set about organising Anand Bhawan (where the family now lived) in preparation for her absence. This included disposing of pamphlets and incriminating documents before the police got hold of them, sending valuables to friends’ homes for safe keeping, and finding refuge for two young friends, fugitives from the police.

“If you courted arrest by breaking certain laws or defying a particular ban,” wrote Nayantara in Prison and Chocolate Cake, “you did so by first sending a polite note to the district magistrate informing him of your intentions. He then promptly proceeded to arrest you, and you went to jail with the utmost simplicity, dignity and courtesy.”

Arrests were often accompanied by the imposition of fines which the Nehrus refused to pay. Consequently, the arresting officers stripped Anand Bhawan of its carpets, select items of furniture, and whatever else they thought was of value, in lieu of money.

“People generally think we lived in great luxury,” Nayantara confided with a laugh, “but really, the rooms were quite bare!” And, as she recounts in Prison and Chocolate Cake:

With the onset of the non-cooperation movement, the two cuisines (western and Indian) were reduced to one and the cellar abolished altogether… The vast retinue of servants was cut down and Nanuji sold his horses and much of his treasured china and crystal. The cover of the first edition, published by Victor Gollancz, London, 1954

Lekha herself had been imprisoned for participating in the Quit India protests of 1942, and other family elders were liable to be picked up at any time. The political situation was likely to worsen very quickly, and so, at Mme Chiang Kai-Shek’s suggestion, Nayantara and Lekha were sent to Wellesley, and in 1945 their younger sister, Rita, went to the Putney School in Vermont.

All this is recounted, sometimes humorously, at other times poignantly, in Prison and Chocolate Cake, interleaved with vignettes of family life at Anand Bhawan, with experiences of changing schools again and again as the uncertainty of their parents’ presence at home grew, and the sisters learnt to come to terms with the fact that Vijaya Lakshmi and Ranjit Pandit were more likely to be in jail than out of it.

The heartbreak of separation had to be borne without tears, with stoicism and a steely resolve to continue the fight. When Chandralekha at one point wistfully wondered whether life would ever be normal for them, Nehru responded with:

‘Normal?’ Mamu repeated, savouring the word as though it was as foreign to his vocabulary as it was to his life. ‘The fact is that we live in an upside-down world, darling, and it’s no use expecting life to be easy. It is not a simple matter adjusting to such a world, especially for those who are sensitive. It is not normal for most of us to spend our lives in prison cut off from our families and dear ones. It certainly should not be normal for intelligent human beings to spend all their time and energy killing each other off, as they are doing all over the world. It isn’t normal either for some people to starve and others to get indigestion through overeating. All this is very abnormal and wrong, but it is happening.’

The bleakness of those days in a sprawling house stripped of valuables, even carpets and furniture, would be temporarily banished whenever Padmaja Naidu, beloved friend of the family, alighted like an exotic bird to keep the children company. Brilliantly plumed in glowing silks and flowers in her hair, Padmasi (as she was called) dispelled the gloom with warmth and cheer and wit. Delicious tidbits like the girls being laughed at when they wore khadi frocks and little Gandhi topis when out for a walk; or a nervous Indira Nehru offering ‘potato-Cripps’ to Sir Stafford Cripps when he came to visit, are part of a happy recall of times when all the adults were in residence and Anand Bhawan buzzed with political activity, with streams of people, great and humble, passing through, staying, discussing and deciding strategy.

This excerpt from Out of Line: A Literary and Political Biography of Nayantara Sahgal by Ritu Menon has been published with permission from HarperCollins Publishers India.