Piketty’s New Book: Praise for Caste-Based Affirmative Action and Other Takeaways for India

In 'Capital and Ideology', the economist expands his investigations across the globe and over long periods of history to explore the role of ideologies in fuelling inequality.

Thomas Piketty made his name in 2014, when his Capital in the Twenty-First Century became an unlikely bestseller. Overnight, he achieved rockstar status – a rarity for an economist. The book seemed to express the outrage against economic inequality, which was making headlines then, even if its theme was limited. This month, he has released a more ambitious work, Capital and Ideology (Harvard University Press), expanding his investigations across the globe and over long periods of history to reveal how ideologies fuel inequalities. 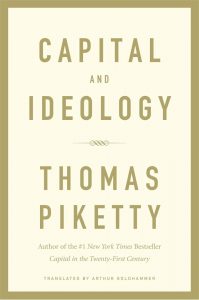 Piketty’s conclusion is simple and clear: “Inequality is a political construction, not the product of ‘natural’ forces of the economy or technology,” as he puts it in an interview. His prescription is a version of socialism with progressive taxation and redistribution of resources to right the wrongs.

In his new work, which runs over a thousand pages long, with a wider historical and geographical scope and access to previously unavailable data, Piketty devotes a nearly 100-page chapter to India. Going down its long history, guided by India scholar Nicholas Dirks’s Castes of Mind (Princeton University Press, 2001), he focuses in particular on caste as an ideology promoting economic inequality. In the concluding chapter, he returns to the current scene: the retreat of the centre-left forces, the rise of the BJP in India, and what it portends for inequalities in the country.

Though the author’s broad-brush approach and the resulting sweeping generalisations may mar the exposition for a specialised reader, here are some of Piketty’s key observations worth paying attention to and debating. “The structure of inequality in present-day India is the product of a complex history involving the transformation of a premodern trifunctional society whose evolution was profoundly altered by its encounter with British colonizers—colonizers who decided to establish a rigid administrative codification of local social identities.” “[T]he fact that India’s upper classes refused to pay the taxes that would have been required to finance essential social expenditures was in part a consequence of a particularly elitist and inegalitarian Hindu political culture (which the quota system in some ways served to hide). As a result, India—despite the undeniable successes of its model of parliamentary democracy, government of laws, and inclusion of the lower classes in the political and justice system—has lost ground in the areas of economic development and basic social welfare, even when compared with neighbors that were not especially well advanced in the 1960s and 1970s. If we look, for example, at indices of health and education for the 1970s, we find that India not only did less well than China and other communist countries such as Vietnam but also fell behind non-communist but less elitist countries such as Bangladesh.”

“Since much of the electorate is deriving little benefit from globalization and pro-business policies, one option open to these parties is to turn up the identitarian rhetoric, be it anti-Muslim or anti-Latino, and indeed they have done so. But availing themselves of this option affords other parties the opportunity to propose more appealing alternatives.”

As for the alternatives, he takes note of a version of universal basic income policy, ‘Nyuntam Aay Yojana’, that the Congress had promised in its manifesto in 2019. Though taking a nuanced view of it, Piketty does appreciate the need for a redistributive policy going beyond affirmative action. The fact, however, that the Congress’s proposal failed to resonate with the masses may suggest how strongly the identity factor is working.

Piketty acknowledges the weaknesses of the centre-left parties and speculates on various future scenarios where such parties may join hands. He believes the outcome will be important for the world – not only because of India’s share in the global economy but also because the same debate of identity vs inegalitarianism is playing out in many parts around the globe.

Ashish Mehta is an independent journalist.