The Loneliness of Manipur's Non-Combatants

A new book examines the painful testimonies and dogged silences of families whose members have been murdered, tortured or raped by security forces, in a place where “everything is in a state of violent, tragic flux”. 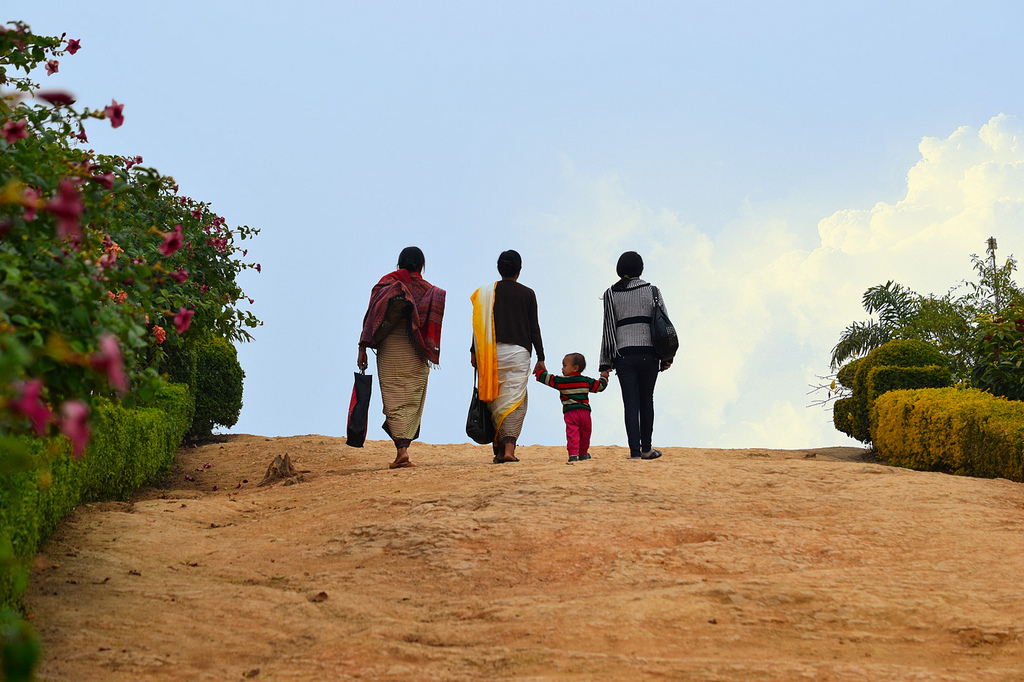 Near the middle of Anubha Bhonsle’s Mother, Where’s My Country? – Looking for Light in the Darkness of Manipur, the author mentions a Pramodini Devi, a renowned Meiteilon playwright and poet. I called my own mother, a retired lecturer in Meiteilon literature, to ask about this Pramodini Devi.

Me: Ima, who is this writer called Pramodini Devi?
Ima: Who?
Me: This book I’m reading says she is one of the three iconic Meiteilon women writers.
Ima: Ussssh, that must be Khaidem Pramodini.

Bhonsle says she spent nine years travelling in and out of Manipur, doing hundreds of interviews, to write her book about the state. So it is strange that she never figured out the redundancy of Devi/Singh, an enforced suffix to the names of Meiteis whose families were forcibly converted into Hinduism in the 18th century – but now a formality, used in official documents only because they replicate the names on birth certificates.

The book is peppered with similar erasures, which is a pattern with mainland Indian reporters. For example, the Meitei boxer Laishram Sarita (Devi) becomes just Sarita Devi in mainland reportage. Most Meiteis do not take issue with this because they have other battles to fight. They resign themselves with the usual sigh, the mainland doesn’t know better.

Some feel guilty about making a fuss, as it is in fact on their birth certificates; they also concede that the mainland cannot be troubled with unpronounceable surnames. A few, as happens in the contradictory lives of the oppressed, have grown fond of the Devi/Singh dangling from their names.

In her Acknowledgments, Bhonsle thanks many Meiteis, none of whom use Devi/Singh. The reason they no longer use it has to do with a subterranean indigenous politics pushing back against cultural imperialism. Bhonsle, in nine years of work, must surely have grown aware of this politics. It is a pity her book shows little sign of it.

Mother, Where’s My Country? addresses the loneliness of the non-combatant people of Manipur, a place where “everything is in a state of violent, tragic flux.” Bhonsle examines the painful testimonies and dogged silences of families whose members have been murdered, tortured, or raped by security forces. She deliberates on the stages of the various self-determination movements in Manipur and Nagaland (traditionally described as insurgencies by the Indian state, but more recently as ‘terrorism’ – no surprise there), and on how “Indian intelligence agencies play divide-and-rule in the name of integration.”

Inter-ethnic violence in Manipur – where “at any time, tables could turn and the victims would become perpetrators” – is weighed as well. Bhonsle writes with extreme care and thoughtfulness about the lives she follows. Yet her omniscient narrator’s voice is problematic, raising questions about translation, and flattening the tensions and evasions that tend to arise when a mayang (mainland Indian) interviews a native in Manipur. This is essentially a book about two power centres in Manipur: Imphal and Ukhrul. It is about Meiteis and Nagas. The emerging third pole, Moreh, is absent, and Kukis have zero presence except in chapters about the suspension-of-operations (SoO) pacts between Kuki militants and the Indian state. Ponderous sections detail the origins of the Meitei and Naga self-determination movements. These histories are repeated ad nauseam by mainland reporters in their Manipur books, which I try to speed-read through.

One non-native journalist many Meiteis take seriously is Bertil Lintner, for his keen insight into the violently-lit world of those movements. Lintner, a Swedish-born journalist and expert on ethnic minorities, insurgencies and narcotics in South and Southeast Asia, avoids domesticating the region as simply an abject failure in nation-building – which many Indian journalists, including Bhonsle, do.

I did read with interest the statements of army officials, saying things like, “We are rearing ducks”, or “Insurgency is the best industry”, or in the case of an Assam Rifles major posted in Ukhrul:

As a Meitei growing up in Imphal in the violent 1990s, I was one of the children Bhonsle wonders about in her introduction: the children who, “go to school crossing barricades; they see uniformed men with guns at almost every crossroad, and they know the drill of midnight knocks.”

I was the child, too, who tore up her diaries, soaked them in buckets of water, and poured them down a drain at 1 in the morning – three hours before a combing operation – because she could bear the idea of being tortured by the mayang sifai (Indian army), but not the thought of them reading her entries and laughing.

All the stuff about racist, occupying forces sent by the Indian state I figured out slowly, as an adult. As a child I just wanted to know what was going through their minds as they went out patrolling – or killing. So when I read the rants of army officials in Bhonsle’s book, they satisfied an old curiosity, an occupational hazard of being a child in an occupied region, militarised beyond the mainland’s comprehension.

The Assam Rifles officer goes on, about how his “brain is always wired” and he can hardly sleep, about how “mantris and secretaries who come down” think his work is “very cool”. Bhonsle offers no commentary on this outburst, but it does lay bare the loneliness on the other side; the toll that counterinsurgency operations have taken on the state forces.

I understand the major when he says his sleep is hardly sleep.

This book is also about Irom Sharmila. Irom Sharmila perplexes everyone. Some young scholars have begun asking provocative questions about why her struggle has failed to generate a sustained, internal discourse among Manipuris. Should Eche (elder sister) break her fast by eating beef, to cock a snook at the current Indian regime? Have the NGO and peace industries that surround her made the movement against the Armed Forces Special Powers Act (AFSPA) a mere technical demand, instead of a real challenge to the army’s occupation?

“The ingenuity of her fast was taking her further away from a reality she was hoping to come back to. Her name and sacrifice were now becoming easy to latch on to. She carried the burden of many people’s demands and expectations, when, perhaps, all she wanted to do was to get it over with and go back to her house and sit in the garden. Or did she? No one can know. She never said it. Perhaps even to think this on her behalf is proof of one’s inability to understand and come to terms with her fierce resolve.”

Bhonsle steps back, and tries to humanise Eche Sharmila with nuanced detail about the parallel lives she leads: her routine, isolated, force-fed life, and the explosions of protest that surround her annual one-day releases. She writes sensitively about Sharmila’s childhood and her early days as a volunteer at Human Rights Alert, Imphal, helping to document violations. She follows Sharmila’s crusade, with special attention to her family and the ways in which her struggle has affected them, the emotional interiority of Eche, and her relationship with her fiancé.

Sharmila’s story is told in conjunction with the timeline of massacres, rapes and disappearances that haunt the Imphal valley: The torture by the Assam Rifles of 23-year-old Khuraijam Pranam Singh, whose intestines were left protruding from his body after a wooden rod was inserted, rotated, and left broken inside him; the rape of 25-year-old M. Mercy Kabui by the 112 Battalion, CRPF; the extra-judicial killing of 12-year-old Mohammed Azad Khan by Imphal West police commandos and the 21 Assam Rifles; the Heirangoithong Massacre of 1984; the Malom massacre of 2000; the unforgettable naked protest by Imas against the rape and murder of Thangjam Manorama by 17 Assam Rifles in 2004.

The period that Sharmila spent in Delhi in 2006, after she was arrested for her fast-until-death to demand the repeal of AFSPA, is recounted in detail. Eche was charged with attempted suicide, and only acquitted by a Delhi trial court on 30 March 2016. (Courts in Imphal West had acquitted her on two earlier occasions.)

The mood was celebratory. The Jawaharlal Nehru University Students Union invited her to campus with much fanfare. Sharmila gave long interviews to mainland publications. She wanted to meet India’s prime minister but was refused permission. She is now back in Imphal, in her room in the JN Institute of Medical Sciences, entering the sixteenth year of her fast to demand dignity and justice for the people of Manipur. Despite courts in Manipur and Delhi acquitting her, Eche Sharmila is back to her room in the hospital. It is a never-ending cycle: she will not give up; the state will keep arresting her.

Speaking to Aratax Shimray, a Tangkhul Naga leader, Bhonsle asked, “What if Sharmila was a Naga?”

Shimray answered, “When I look back, what bothers me most isn’t Sharmila – she is a legend. She is, and it should come as no surprise to you that I say that. But AFSPA came in 1958, our people suffered, our people died, our people were raped. Now there is changing of history. In pamphlets or talks against AFSPA, everything begins from 2000, like nothing happened before that.”

Shimray sees the anti-AFSPA movement as having been hijacked by the Meiteis, even if, “Sharmila’s fight against AFSPA was in consonance with what the Nagas wanted.”

“Wherever you turn in Manipur,” Bhonsle observes, “Whatever you do, you’re caught in a double bind”. It is a poignant situation – one that any reporter in Manipur will encounter as well.

Shuttling between the Imphal valley and Ukhrul in the hills, Bhonsle explores the chasm dividing the Meiteis and Nagas. What baffled me was why her narrative about Ukhrul was so focused on the baroque orchestrations of the Tangkhul Naga rebels and the army (which culminated in the Naga peace framework signed by the NSCN (IM) and the Indian government). The inner lives of non-combatant Nagas are left unexplored. Bhonsle leans in closer to hear Meitei stories than Naga ones. There is no mention, for example, of the extraordinary protest by a Tangkhul teen after the rape and murder of a friend, the 18-year-old weaver Luingamla Muinao, by Indian soldiers in 1986.

Zamthingla Ruivah designed and wove a red shawl, called the Luingamla Kashan, as a symbol of memory, protest and resistance. It is still worn by Tangkhul Naga women today.

Ruivah is now a master weaver and poet, and lives in Imphal. Stories like hers mirror the stories of pain and protest of Meitei women in the Imphal Valley. It would have been wonderful to read both in equal measure.

Mother, Where’s My Country? offers no original or radical proposals for my vexed state. I do not believe books like this are, or really can be, written for natives. I hope instead that they are written by mainland Indian reporters (either nationalists, or believers in the Idea of India) to wrestle with their own demons and confront the catastrophes which their state has unleashed on indigenous/tribal lands and communities in the name of nation-building.

How Indian reporters do that wrestling, though, is of interest. Bhonsle does it with self-awareness. In her introduction, she is candid that narrow interest in AFSPA and faction-ridden insurgency drove her first exploration of Manipur. With time, she learnt that “there is neither war nor peace. It is sometimes relatively high on violence, but intense when it comes to resentment and mistrust. The conflicts don’t go away and neither do they spiral out of control. Thus the torment of life in the shadow of the gun has lasted generations… A state of emergency has been the rule, not the exception.”

Swar Thounaojam is a playwright, theatre director and performer who lives between Imphal and Bengaluru.