The King and Kalinga: An Excerpt from Ashoka in Ancient India

A sense of solidarity between ruler and administration was being sought, and one imagines that Ashoka's message was necessitated by problems specific to Kalinga.

Ashoka and his queen as they appear on a 2nd century CE sculptural panel at from Kanaganahalli (Karnataka), courtesy Archaeological Survey of India. Photo: Nayanjot Lahiri. 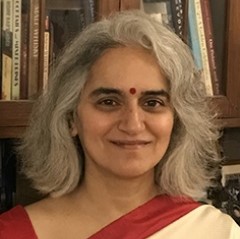 In the third century BCE, Ashoka ruled an empire encompassing much of what is today India, Pakistan, Afghanistan, and Bangladesh. During his reign, Buddhism spread across the  subcontinent, and future generations of South Asians came to see him as the ideal Buddhist king. In Ashoka in Ancient India, the historian Nayanjot Lahiri disentangles the threads of Ashoka’s life from the knot of legend that surrounds it, presenting a vivid biography of this extraordinary Indian emperor and deepening our understanding of a legacy that extends beyond the bounds of Ashoka’s lifetime and dominion. An extract: Around 261/260 BCE Ashoka fought the first and possibly only large-scale war of his reign, at Kalinga. This is the only conquest he mentions here, and since no other territorial victory figures in any of his later edicts it can be presumed that this was his only major military battle. The number displaced (‘one hundred and fifty thousand’), killed (‘one hundred thousand’), and dead as a consequence of the war (‘many times as many those who died’) make it clear that this was warfare on a very considerable scale, even if one discounts the tendency to top up the headcount by offering epic figures rounded off to the nearest hundred thousand. The carnage also seems to have brought suffering indiscriminately upon all—Brahmans, Shramanas, other sects, households—many among them people who had actually practised the dhamma that Ashoka now espoused. The future protocols for human relationship that would come to define the emperor’s idea of dhamma— from obedience to parents to proper courtesy towards slaves and servants—were those that the king now saw as having been already lived by many whom he had slaughtered, dispossessed, and deported. He describes his victory as deplorable because of the blind uniformity with which he had inflicted misery, the ironic democracy of suffering he had created.

Following a brutal pacification of the area, a strong Mauryan provincial government must have been headquartered there. Several years later, it was to the administrators of Kalinga that Ashoka directly spoke and, as we shall see, political exigencies here resulted in a changed royal message.

How did Kalinga’s landscape recast the message put there? Since the consequences of his actions haunted Ashoka, it seems likely that, years later, along with eleven of the original anthology that made up his major rock edicts, he caused two further edicts to be engraved there, both qualitatively different from the others. In them the emperor, speaking in the first person, instructs the officials at Tosali and at Samapa, whom he specifically mentions as being occupied with many thousands of people, his object being to gain their affection. For the first time, he uses words that indicate a filial relationship with his people. The Second Separate Edict, which actually occurs before what is designated as the First, says:

All men are my children.  As on behalf of (my own) children I desire that they may be provided
by me with all welfare and happiness in this world and in the other world, even so is my desire for all men.

This became a recurring motif: his officials were asked to fulfil their duties and inspire people ‘in order that they may learn that the king is to them like a father, (that) he loves them as he loves himself, (and that) they are to the king like (his own children).’ Much the same can be seen in the First Separate Edict: ‘just as for (my own) children I desire that they may be provided with all welfare and happiness in this world and in the other world so I desire for all men also’. Ashoka and his queen as they appear on a 2nd century CE sculptural panel at from Kanaganahalli (Karnataka), courtesy Archaeological Survey of India.
Photo: Nayanjot Lahiri

In his exploration of ancient kingship B.G. Gokhale has suggested that this sentiment was rooted in the idea of early Buddhist kingship where political society was depicted as a family presided over by a morally elevated being in the image of the father. However, if this was so, why were the officials in Kalinga being informed that the king treated all people as his own children—unlike, for instance, those who manned the administration in Gujarat and north-west India? Is it possible that, after its annexation, the newly conquered people were being treated harshly by Mauryan officials? Among a people so recently vanquished, could Ashoka have appeared in the avatara of a father figure? We can only guess that there was a degree of alienation in Kalinga, and Ashoka was therefore being discreetly reticent. Enveloping his rescript within an affective mould was one way of building bridges with them.

His ‘unconquered borderers’ (‘amtanam avijita’) in Separate Rock Edict 2 were also addressed in this intimate way. Border people could be quite troublesome and those on the borders of the Mauryan empire certainly were. In addition to describing them as his children, the emperor used every temperate word at his disposal to convey to them that he was not an aggrandizing and brutal overlord but one who wanted their confidence. Simultaneously, he hoped to induce in them the practice of morality:

It might occur to (my) unconquered borderers (to ask): ‘What does the king desire with reference to us?

His image suffered from a trust deficit vis-à-vis those addressed: this is evident. Presumably, these borderers would have been privy to the ruthless way in which Ashoka had run over Kalinga and may have feared they were next in line. Ashoka is at pains to persuade them otherwise.

As for Ashoka’s subjects in Kalinga, his main concern in Separate Rock Edict 1, what exactly was he asking his administration to do even as he addressed all and sundry as his progeny? If one pays heed to a strong hint in the edict, he was looking at ways of changing and improving an insensitive Mauryan administration in Kalinga. He alludes to this when he exhorts officials to pay attention to being even-handed in the administration of justice (‘niti’), and to cultivate the right qualities necessary to the discharge of their duties:

It happens in the administration (of justice) that a single person suffers either imprisonment or harsh treatment.

In this case (an order) cancelling the imprisonment is obtained by him accidentally, while (many) other people continue to suffer.

In this case you must strive to deal (with all of them) impartially.

But if one fails to act (thus) on account of the following dispositions: envy, anger, cruelty, hurry, want of practice, laziness, (and) fatigue.

(You) must strive for this, that these dispositions may not arise to you.

And the root of all this is the absence of anger and the avoidance of hurry.

He who is fatigued in the administration (of justice), will not rise; but one ought to move, to walk, and to advance.

Ashoka seems very aware that all was not quiet on the eastern front. Looking for words to motivate his administration there, he was unequivocal about the dire consequences of failure: ‘there will be neither attainment of heaven nor satisfaction of the king’. They would attain heaven and pay the king’s debt by listening carefully. The idea of paying a debt had figured in the Sixth Edict, where Ashoka spoke of discharging the debt he owed to living beings. Now, in this new articulation, it was the officials who by carrying out their duties would enable Ashoka to discharge this debt. A sense of solidarity between ruler and administration was being sought, and one imagines that this message was necessitated by problems specific to Kalinga.

In most places, Ashoka’s engraved messages were read out by officials. This, in turn, entailed careful listening by the people gathered. For his ‘unconquered borderers’ and in Kalinga, the king practically ordered that these edicts be regularly read out. Separate Rock Edict 1 is pretty straightforward in telling his officials to get the job done: ‘And this edict must be listened to (by all) on (every day of) the constellation Tishya. And it may be listened to even by a single (person) also on frequent (other) occasions between (the days of) Tishya. And if you act thus, you will be able to fulfil (this duty).’ Considering that the edict is primarily concerned with improving administration and justice delivery, a reading between the lines seems called for: the emperor seems to be saying he disapproves of the existing state of affairs and has given officials specific redressal instructions. Via repeated broadcasts heard at least three times a year (implied by reference to the Tishya constellation), some sort of accountability is being attempted. The line ensuing makes this apparent: ‘in order that the judicial officers of the city may strive at all times (for this), (that) neither undeserved fettering nor undeserved harsh treatment are happening to (men).’

He says, further, and specifically at this location, that a quinquennial scrutiny will be conducted by a mahamatra of suitable character, ‘neither harsh nor fierce, [but] of gentle actions’, to ascertain if judicial officers have been acting according to instructions. This promise of supervision was not restricted to Kalinga: other centres of provincial administration—Ujjayini and Takshashila are specifically named—were also instructed to send out mahamatras for the same purpose triennially. On account of this command it has been assumed that these separate edicts were not Kalinga-centric but intended for administrators in other parts of the empire as well. This may well be so. All the same, at Kalinga the instruction will have carried a meaning more loaded by recent events and the remembrance of them.

Those parts of Ashoka’s message that are found at Dhauli and Jaugada are neither about the preaching nor the practice of dhamma. They are centrally concerned with delivering better administration in a politically sensitive province. The emperor modifies the content and tenor of his message keeping in mind the situation on the ground. At one level, it seems a truism to say that because reception within specific contexts mediates messages and colours interpretations, uniformity of meaning across landscapes is a myth. In the peculiar case of Ashoka’s edicts, which despite being spread over thousands of kilometres tend very strongly to be seen as disseminating a single message, it has seemed worthwhile to me to scrutinize the truth content of this truism. The valorization of Ashoka by Buddhist historiography is understandable, yet it cannot be denied that the religious agenda driving such history has helped immensely to reinforce the idea that Ashoka’s messages can be reduced to a singular sermon in defence of the faith. By contrast, because the ways in which political authority is inscribed in a landscape are necessarily varied, attentiveness to situational variety is necessary. Some regions are conquered by the sword and require healing; others need pacification; yet others may respond best if addressed in Greek and Aramaic. Landscape, in relation to Ashoka’s edicts, is not a tabula rasa on which nothing other than contrition and a new moral agenda, bordering on missionary zeal, are written. Local history offers possibilities sometimes invisible.

As one anguished king pointed out to his companion in a very different context: ‘There are more things in heaven and earth, Horatio/ Than are dreamt of in your philosophy.’

Nayanjot Lahiri is Professor of History at the University of Delhi