When used in the diaspora, 'Kala Pani' refers to the large-scale migration out of India in the 1830s when hundreds of thousands of Indians left the subcontinent to work in the sugar colonies as indentured labourers, or ‘bound coolies’. 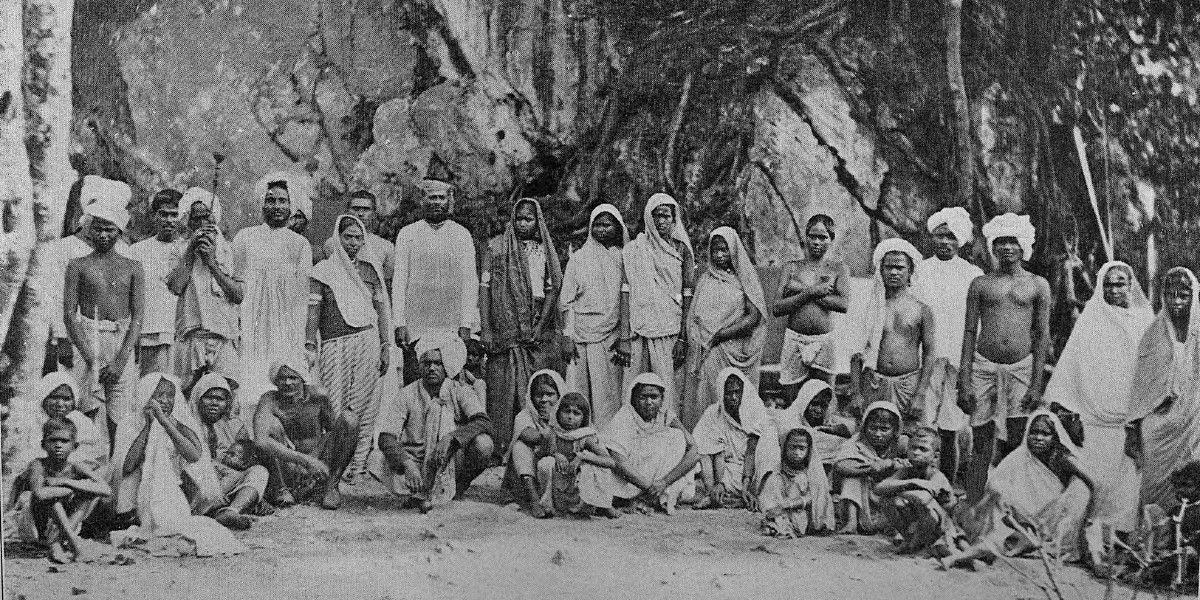 In India, Kala Pani is associated with the Cellular Jail in Port Blair where freedom fighters and dissidents were sent by the British colonial authorities in the early 20th century. When used in the diaspora, it refers to the large-scale migration out of India in the 1830s when hundreds of thousands of Indians, both willingly and unwillingly, left the subcontinent and crossed the Kala Pani (the ‘Black Waters’) to work in the sugar colonies as indentured labourers, or ‘bound coolies’. These emigrants were responding to the need for labour on plantations after slavery was abolished in 1834 and terminated in 1838. Some 1.25 million emigrants were taken to Fiji and Mauritius, as well as the British, French and Dutch Caribbean. However, even if the historiography is now abundant and detailed, even if the academic criticism that has been published has made creations in literature, film and the arts shine brighter, the diasporic point of view has prevailed. Ashutosh Kumar had remarked there was ‘a curious lacuna regarding indenture as far as 19th century mainstream Indian political and politico-economic discourse [was] concerned’. And yet, it seems that by the time MK Gandhi returned to India in 1915, the tragedy of the indentured labourers had found a firm and sympathetic expression in literary works emerging from Bihar and eastern UP, the area that had witnessed most of the migration. Consequently, several major journals dedicated large sections to the distressful condition of indentured labourers in Mauritius, British Guiana, Fiji, and South Africa.

Chand was among the most influential Hindi journals of that era. It devoted an entire issue (January 1926) to the migration, and Premchand’s short story Shudra was the highlight. Kamal Kishore Goenka calls Shudra the first work of Hindi fiction on the indentured, and perhaps the first Indian work as well.

There is thus a curious imbalance in the fact that while the diaspora literature written by those whose forefathers left India to work as indentured labourers has been a topic of major academic and political discourse, very scant attention has been given in India to those members of the early diaspora and to their descendants. Their stories and memories continue to exist in the popular imagination, but do not figure in curricula or political manifestos.

At the end of the first decade of the 21st century, however, an internationally acclaimed writer of Indian origin, an American journalist of Indo-Guyanese descent, and an Indian academic provided a game-changer. Between 2008 and 2015, Amitav Ghosh’s Ibis Trilogy was published. Gaiutra Bahadur’s Coolie Woman: the Odyssey of Indenture was published in 2013. And Ashutosh Kumar’s Coolies of the Empire was published in 2017. In less than 10 years, novel writing, non-fiction, archival work and academic research operated in striking conjunction to give Kala Pani crossings fresh momentum.

As this volume was being prepared, the Covid-19 crisis shook us out of our certitudes. How tragically ironic that the phrase ‘migrant crisis’, which used to refer to the Mediterranean in the wake of the Arab Spring in 2011, now refers to India during the Covid-19 pandemic. The 1830s migrations were prompted by the colonial powers out of greed, though the indentured eventually negotiated it to their advantage and managed to wrest a narrative, a house of their own. A century later, the post-Partition migration was the complicated consequence of colonial rule, communalism and failure of Indian politics. But in the 21st century, the Indian state cannot blame any outsider for the misery. A large number of those on the roads in the spring and summer of 2020 are natives of the villages and towns in UP and Bihar from where indentured labour had migrated. Those who couldn’t migrate to foreign shores two centuries before and shifted to Indian cities after Partition were now forced to return to what the state believes is their original land.

When a possible discourse on Indian perspectives of Kala Pani migrations began to emerge in the transnational conversations between the co-editors of this volume, one Indian and the other a diaspora scholar based in France, neither realised the waters that would be crossed. Questions were raised — how come this history is better known out of India than in India itself? Doesn’t one need, at some stage, to invert the mirror, to look within and retrieve this forgotten chapter of Indian history? What would be the advantages of shining a torch onto a history that had been kept invisible? Had it been neatly made invisible, by design or default, or are we once again dealing with the messy business of memory, history and historiography? … How can those archives of the past bear an impact on our reading of the present and influence our shaping of the future?