'The Coming Age' offers readers insight into the Tamil writer's nuanced discourse, his strike at the heart of social ills and his unique linguistic capabilities. Subramania Bharati. In the background is a map of the Madras Presidency. Photos: Public domain. Illustration: The Wire

Mahakavi Subramania Bharati’s English writings, which includes his journalistic pieces, letters and translations, edited by Mira T. Sundara Rajan, the poet’s great-granddaughter and brought out by Penguin, is a sincere attempt to place him within the literary atlas of ‘Indian’ literature.

The publication of Bharati’s English writings assumes significance today when our literary and academic spheres move more towards Indian regional literature translated in English.  Although these English writings have already appeared, the present volume demands our attention as it comes from Bharati’s lineage. 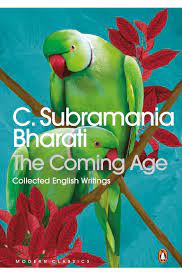 Each of these attempts offers a new perspective on Bharati’s English writings.

Additionally, the descriptive notes on each piece and those on culture-specific terms may help non-native readers within and outside India to grasp the depth and force of Bharati’s poetics and politics.

The contents of the book have been divided into writings pertaining to ‘The National Movement’ and his reflections on linguistic, philosophical and social issues. While celebrating the leaders of the National Movement like Gokhale and Tilak, he was also conscious of securing a place for the struggles of leaders in the Madras Presidency.

The subtitle ‘Collected English Writings’ invites the reader to the relatively unfamiliar side of the Tamil poet.

Any reader would notice his forceful diction, syntax, admire his perspicacity and wonder at the ease with which he has used the coloniser’s language to criticise their administration.

In his letter to Ramsay Macdonald of the British Labour Party, about the police surveillance on him in French-occupied Pondicherry in connection with the killing of the then Tirunelveli collector, Ashe, by Vanchinathan, he writes:

“The lower police – to whom, by the way, political motives and political crimes were, still are, as strange and unfamiliar as differential calculus – at once imagined that the newspapermen who had been talking swadeshi on the sands of the Madras Beach three years before must be at the bottom of the whole thing…” (55).

Hinting at the administrative coalition between the two rival powers (British and French), he closes the letter, saying:

“I wish I had sufficient power of language to depict the whole absurdity and injustice of the thing… But I am beginning to fear that His Excellency’s hands are stayed in this matter by the reactionary elements in his new environment” (61). A postage stamp issued by the Indian government to honour Bharati.

In his reflection on World War I, he says: “The affairs of cawing crows and of ‘civilised nations’, of cats and of ‘supermen’, are all determined by divine laws…” The tone is too close to his allegorical tale, ‘Kaakkai Parliament’ (‘crow parliament’) in which he ridicules the colonial mechanism.

Any Tamil reader would recognise the tone and rhythm of the piece, ‘New Birth’ as an English rendering of his canonical Tamil song “Aaduvome pallu paduvome.” While reading ‘The Fox with the Golden Tail: A Fable with an Esoteric Significance,’ the contemporary reader is likely to wonder whether George Orwell modelled his novel, Animal Farm, based on this tale.

But, unlike Orwell, who makes his critique of communism explicit, this tale is subtly narrated as to move beyond the particular colonial context, inviting responses from other cultural contexts. This constitutes, we can say, the poetics of our Mahakavi’s prose. Such rewarding pieces also offer the possibilities of reading them within contemporary debates on language, culture and the discourses of modernity.

They spring from his deep sense of awareness of Tamil literature, grammar and tradition without being confined to his admiration for European Romantics as well as Indian nationalists like Tagore.

Saying that “mystic books are of value where they deal with ordinary things and cease to be mystic,” he lays his criticism against Brahminical claims.

It is this ‘ordinariness’ or the ability to relate with common humans that Bharati regards as the chief feature that distinguishes a Siddha from Nietzsche’s highly rationalised “supermen.” This social consciousness helps him place the woman question as part of the national question. He says:

“The situation is nauseating. We are men, that is to say, thinking beings. Our chief work in this world is the understanding and glorification of God’s ways, and not the enslaving of God’s creatures. If any man or nation forgets this, that man or nation is doomed to perdition” (75).

This is why his political vision remains inseparable from a social concern, which, he says, needs to be inculcated: “We must spread the contagion of greatness among the people” (42).

It is this nuanced discourse, which does not naively talk of women, that demands our attention today. This discourse is closely connected to his views on Europe overcoming a strict anti-colonialism: “We have a special love for Europe, in spite of her blunders and faults” (19).

This was extended as a general critique of Western discourses on the ‘Other’ and its root in the Enlightenment. Hence, he says, “Reasoning is not the endless quibbling and hair-splitting of the professional logicians and critics. These are abusers of Reason”(167).

This critique of the European Enlightenment arises out of his deep awareness of the “occult element in Tamil speech” which he tried to capture in his exploration of the genre of Tamil ‘prose poems’. But this does not remain purely Tamil as he continuously contemplates on the concepts of Sanskrit tradition and says: “All truth is inspired” (86).

He reformulates the same in the Romantic idiom as: “Truer words were never written…Imagination makes a nation’s seers, its poets, and its builders of all types” (104).

This critical perception of religion and spirituality led to his contempt for the ‘godmen,’ irrespective of religion:

“Three-fourths of the spiritualities trumpeted among men have been proved to be ways of earning money, practiced by clever scoundrels or self-deluded charlatans”(166).

For him, ‘spiritual’ is something that pervades all walks of life:

“True, patriotism must be spiritual, but that does not mean that differences of belief concerning the nature of the other world should be brought into the theater of secular nation-building”(47).

The fact that he said it more than two decades before the partition of India makes him a political messiah, anticipating Frantz Fanon’s warnings of the pitfalls of national consciousness. Such an interest in the sociology of nation-building is articulated in clear terms when he says:

“When men bring into political life the bitterness of religious sectarianism, or the spirit which ordained the untouchable and unapproachable castes–well, they commit political suicide; that is all” (44).

Bharati could give this warning to the Indian National Congress thanks to his exposure to the anti-caste tradition in Tamil culture and the anti-Brahmin movement of early 20th century Tamil Nadu. This critique of caste, if read in the light of Tamil scholars’ questioning of his affiliation with Brahmin associations, may be fruitful in the context of Dalit studies.

While claiming that the practice of caste is “leagues away from the Gita theory,” he says:

“Brahmanas have long ceased to think seriously of eternal verities or the sciences of this earth” (78).

Where Gandhi choose to merely condemn the practice of untouchability, Bharati talks of the crime of caste. This broader critique was perhaps possible because of Bharati’s exposure to the 2nd-century CE text, Vajrasuchi, by Ashwagosh. Bharati’s mention of this widely circulated and debated text on caste also receives mention in Seeni. Viswanathan’s edition of his complete works.

Also read: ‘Never a Mahatma’: A Look at Ambedkar’s Gandhi

If his reflections on colonialism and nationalism suggest a possibility of evolving a poetics of prose, his translations and his continuous fascination with the form of fables draw attention to philosophical aesthetics.

Reading this volume would definitely help present day readers ponder over theoretical and aesthetic issues thanks to Bharati’s balancing act between form and content.

The editor of this collection says Vijaya Bharati, Bharati’s grand-daughter and her own mother, was the first scholar who worked on his works, that Vijaya Bharati “learned the poet’s verses as Bharati, in keeping with the Indian tradition that unites poetry and music, originally sang them to his family… One of her cherished goals was to publish Bharati’s original English writings in a new edition” (xii). In fact, in addition to the efforts of Bharati’s wife Chellamma and his brother Viswanatha Iyer to get his works published, I believe there was also a scholarly tradition which unearthed and published relevant work. It includes writer Va. Ra, poet Pe. Thooran, scholars like Ra. A. Paananaban, A.K. Chettiyar, Ilasai Maniyan, C.S. Subramaniyan, V.G. Seenivasan, The. Mu. C. Ragunathan and Pe. Su. Maniyan.

The history of each one’s efforts has been so well-documented that any interested reader can get a clear picture of Tamil scholarship on Bharati in early and mid-20th century Tamil Nadu. Consolidating these efforts, Seeni. Viswanathan brought out a classic edition in 2012, authenticating the periodisation of Bharathiyar’s works, including his English writings and translations.

Earlier, the All India Subramania Bharati Centenary Celebrations Committee also brought out a good collection of Bharati’s works, adding to his English works a scholarly introduction by K. Swaminathan in 1984. In our own time, we have scholars like Venkatachalapathy, Manigandan and a few others whose work on Bharathiyar have received honours from the government of Tamil Nadu.

Sadly, the scholarly tradition that has toiled to preserve and publish Bharati’s works over time has been neglected in the volume under review.

Readers who compare Bharati’s translations (of Tamil Bhakti poems and his own), with the translations of Bharati by others, would definitely find in Bharati an able translator with an enormous confidence in the source and target languages, though Bharati was a little apprehensive about his English translations.

A sample translation from Nammalwar’s Tiruvaymoli may stand as a proof of this:

O dear soul of Mine,
O great Life that made and pierced and ate and spouted and measured
All this immense space,
O Glorious Life that made the oceans, dwelt therein and churned
And stopped and broke them,
Thou who art unto the Gods what the gods are unto men,
O Soul unique of all the worlds, whither shall I go to meet Thee? (139)

In addition, the inclusion of his translations in this collection will push the readers to see the mutual illumination of his English and Tamil writings.

It is here that Bharati remains a frontrunner of the tradition of bilingual writers like Ayyappa Panicker, U.R. Ananthamurthy, Girish Karnad, and Dilip Chitre who have continued to inspire us in mother-tongue scholarship.

Acknowledging this scholarly tradition and reading Bharati’s English writings in relation to his Tamil work may help the readers understand and appreciate why we call him ‘Mahakavi’.

R. Azhagarasan is professor of English, University of Madras.