'Sleepwalking to Surrender' – A Study in Pakistani Extremism

Khaled Ahmed's 'Sleepwalking to Surrender: Dealing with Terrorism in Pakistan' fell short in that was far more descriptive than it was prescriptive. 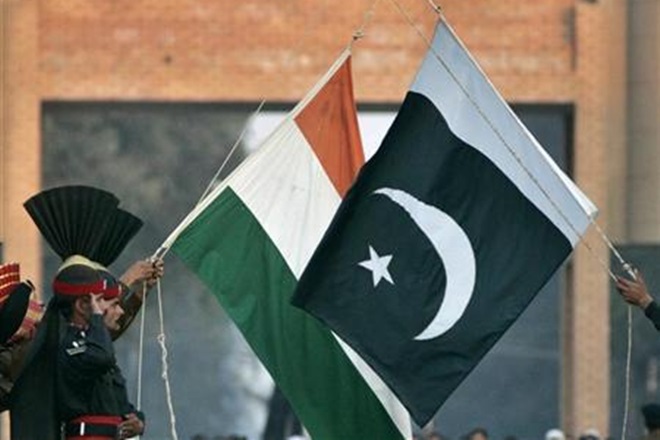 The Indian and the Pakistani flags. Credit: Reuters 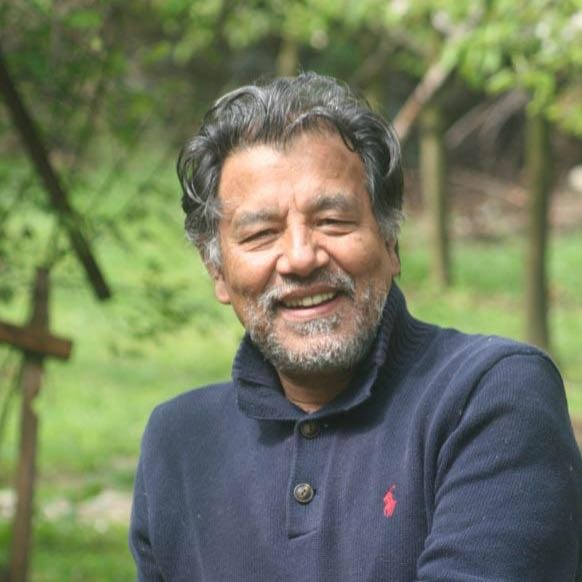 The optics of the 1989 dissolution of the USSR was most intense in Europe and symbolised by the collapse of the “iron curtain” in Berlin. But it was a process that unraveled far from Europe, with the Soviet invasion of Afghanistan. So it is not surprising that the long-term effects of that event visited South Asia with a vengeance. Its immediate impacts were Washington’s cynical use of Pakistan in globalised Islamist extremism and the devastating sway of this cynicism on the direction of state and society in Pakistan. The latter’s copycat deployment of proxy warrior tactics exacerbated the already dysfunctional ‘paired minority conflict’ between India and Pakistan in South Asia. Meanwhile, in the identity politics spawned as an aftermath of the collapse of the cold war regime, India also steadily journeyed towards an overtly muscular religious nationalism. All these after effects have contributed to make for a deceptively unstable South Asia.

Today, the prospect of a clash between South Asia’s two largest states with competing religious nationalisms (one matured and the other growing) and the concurrent utility of both states, for reasons of market economics and geostrategic advantage, makes for a complex tangle in South Asia that cannot be underestimated. At the center of this potential maelstrom are the twin extremisms of Islamist and Hindutva impulse, both powered by non-state actors and both allied with deep-state players. Clearly, in the interests of regional peace, the two extremisms need careful study, objective analysis and common-sense prescriptions to avoid the abyss that South Asia could be confronted with very soon. Khaled Ahmed’s Sleepwalking to Surrender: Dealing with Terrorism in Pakistan (2016, Penguin-Viking), albeit focused only on Pakistan, is a welcome title in that vein. 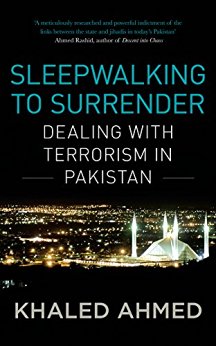 The answer to whether the book meets the expectations of that complex discourse, however, is less obvious. To begin with, it is poorly edited with more than the normal quota of typographical errors evenly spread throughout the book – something not expected from work entrusted to a prestigious publisher. The difficulties caused by the errors are not insurmountable but they irritate, break the flow of the reader. Some of the more flagrant ones tend to require a re-reading of passages that some simple editing could have avoided. One such is the isolated mention of a certain “Sayyaf” on page 421 – to ascertain who he is one is forced to consult the index. We find that the last mention of him, equally isolated, was on page 43 as an Afghan warlord. Similarly, the reader is told that Feroz Hassan Khan “is no ordinary author” but nowhere is his book or article cited. Yet again on page 351 we encounter a Wali Nasr forcing one to check the index to see whether he is different from the well-known academic Vali Nasr mentioned earlier in the book. Wali Nasr does appear in the index, but one has to deduce that the name has been misspelled in the latter instance. The forced breaks in the flow of the reading apart, such errors diminish the labour that goes into producing a book.

But moving to the substance of the book, although not explicitly mentioned anywhere, Sleeping to Surrender appears to be a collection of articles written by the author in the last six or seven years. They have been collated and clustered to form thirty-two chapters on a range of subjects on contemporary Pakistan, many of them about political terror. An underlying theme of the book is that Pakistan is in denial of this reality, a message conveyed in the book’s subtitle. But lacking an introduction or a valedictory message that ties the loose ends of the essays, makes for a difficult review. In the event, it is a potpourri of essays with anecdotal analyses, book reviews, commentary on geopolitics, a comparison of South Asian judiciaries, obituaries and biographical sketches of protagonists ranging from ‘Saint Qazi’ Hussain Ahmad of the Jamaat-e-Islami to the notorious Dr A. Q. Khan of nuclear proliferation fame. The reader, however, is left to guess at the author’s broader conclusion, extract them from his implications or deduct them from his endorsement of the views of others.

This is not to say that there are no conclusions. They are many – about the army, the non-state actors, the civil government and religious extremism. But they are predictable, not elaborated on. Thus, the army must stop supporting religious parties that advocate extremism, political violence and terror. The state should not surrender the rendering of social services to non-governmental actors who are jihadists in disguise. The biggest threat to Pakistan’s existence are the non-state actors that the state created to fight its proxy wars. The Pakistani elite merely echo western criticism of it, over simplify its problems and so are incapable of offering solutions. The Pakistan army is tactical rather than strategic in its thinking. The author also supports the insight that points out the impracticality and irony of Washington’s Afghan policy in attempting to resolve the latter’s woes while alienating both Iran and Pakistan from it.

An exception to this raft of opinions – often reportage of others’ (cited) conclusions – is Ahmed’s sharp observation that Pakistan “is a median state between India and Central Asian states”. It is an alluring reference to the potential that exists for regional solidarity between South Asia and Central Asia, with Pakistan as a conduit determined by geography. Unfortunately, it remains an isolated statement and is not given the analysis that it deserves. On occasion, the subject matter addressed raises hopes for an imminent analysis, such as the chapter on the Council of Islamic Ideology (CII) entitled ‘A Council of Runaway Ideology’. But it too ends up disappointing. Much the same could be said of the other discussions. The effect of such omissions is to leave the reader wandering among the trees and missing the forest for it.

On receiving my copy of Sleepwalking to Surrender, it was the subtitle, ‘Dealing with terrorism’, that attracted attention. To me, it meant that the book would concentrate on prescriptions. But they are missing and what we get is a sort of thick description of Pakistan’s geostrategic paradoxes and contradictions and, internally, the schizophrenia and bafflement that besets it. At best, the broadest of conclusions is the testimonial that the country had not been able to ‘deal’ with the political extremisms that visit it. But then such descriptions of contemporary Pakistan have been very creditably addressed – in different ways – by several scholars, journalists and activists in recent years including Farzana Shaikh, Vali Nasr, Stephen Cohen, Faisal Devji, Tariq Ali, Shuja Nawaz, Ayesha Siddiqi, Akbar Ahmad and Andrew Small. In a South Asia that is swiftly becoming a cauldron, it is a discussion on prescriptions for our dilemma that we crave.

Early on Ahmed states that India “is not an ideological state” and envies its “masses [who] are not given to extremism”. In this, he appears to fall prey to the maxim that the grass always greener on the other side. The statement may apply, with severe qualification (as recently argued by Saeed Naqvi in his Being the Other) to the pre-1989 India of the cold war years. But since then, arguably since 1992, India has galloped towards, precisely, an ideological state that the masses owned, emphatically in mid-2014 and since. Meanwhile, Pakistan’s articulation of identity politics has ripened. Clubbed with current events in the other South Asian countries, the region is fast becoming a cauldron of identity conflicts. Put another way – ideology, religious ideology, has engulfed South Asia – certainly in Bangladesh, India, Pakistan, Sri Lanka and Myanmar – albeit in each of these states with nuanced differences. To solve it, intellectuals on all sides of the divide need to think of a South Asian solution that trumps religious demagoguery. To do so we need to reach out as South Asians across boundaries and lines, study the onslaught of religious extremism in the context of, in this case, global radical literalist Islam and Islamist violence and accurately access the extremisms of other religions – including Hinduism and Buddhism – in other parts of the region.

Sleepwalking to Surrender does indict the linkages between the state and jihadis – but it would have been a richer contribution with some discussion as to how citizens of the beleaguered states could contribute to the region’s growing irrelevance, except when in comes to bipartisan bargains struck with the so-called ‘great powers’. Towards this, it is worth pointing out that there has been a growing literature on political thought engendered by advocates of Islamist reform and the political violence that some strains of it (it is often forgotten that the Islamist reformism has a spectrum that ranges from narrow-minded piety to the toxic advocacy of terror) perpetrate. While Pakistan is the subject of Ahmed’s book, the problem of terror in politics needs to be addressed on several fronts – political, historical, regional and Islamic intellectual history.

Politically it has been argued that violence in politics is driven by the motivation of marginalised societies to attain to political power. This is the basic argument in Faisal Devji’s Landscapes of the Jihad (2005) and his thesis is that, ultimately, terror-advocating political organizations seek to change the paradigm of the discourse, create new ‘landscapes’, become a player in their own futures. The argument from history provides another vein of analysis. One such is Karen Armstrong’s Battle for God (2000) which illustrates and argues that religious extremism is a development in confrontations between religions and modernity after the industrial revolution. She argues that the “militant piety” in all the Abrahamic religions is a modernist reaction to modernity, as opposed to the needed deeper understanding and explication of these religions. In the context of the geopolitics, Unholy Wars (1999) by John Cooley provides us with a vivid picture of the machinations of states (particularly the US) in their own interest. And as a problem of polemics about Islam among Muslims, works such as The Great Theft: Wrestling Islam from the Extremists (2005) by Khaled Abou el-Fadl and other works [for example, Fatima Mernissi (1993), Bassim Tibi (1998), Abdelwahhab Meddeb (2003) and Mahmood Mamdani (2004)] provide us with the background to a better understanding the vicissitudes and existential threats to the Pakistan state. We need to pick up from these and other threads of work already done. In Sleepwalking to Surrender the author, who clearly lived an examined life through Pakistan’s “sleepwalk”, missed an opportunity to initiate one strand of that discussion.