'Rumble in a Village': A Perceptive Novel About Caste and Its Role in Society “Nobody listens to them. Nobody notices them. But they see everything.” This is an Army captain’s remark about Dalits, in Rumble in a Village, a novel by Luc Leruth with Jean Dreze. After reading the novel I feel that Dreze, and people like him, have heard everything, and chosen to speak up about it. His novel is successful in capturing the little movements of rural life, like Fellini’s cine-camera. Dreze is not only observant of the “rumbles” themselves, but clear about their far-reaching consequences for Indian society.

In this fiction, Luc Leruth, a mathematician with a PhD in Economics, and Jean Dreze, a development economist, share actual experiences and observations of Indian life – especially the latter’s descriptive notes from his stay in Palanpur in 1984, written up by Luc Leruth. 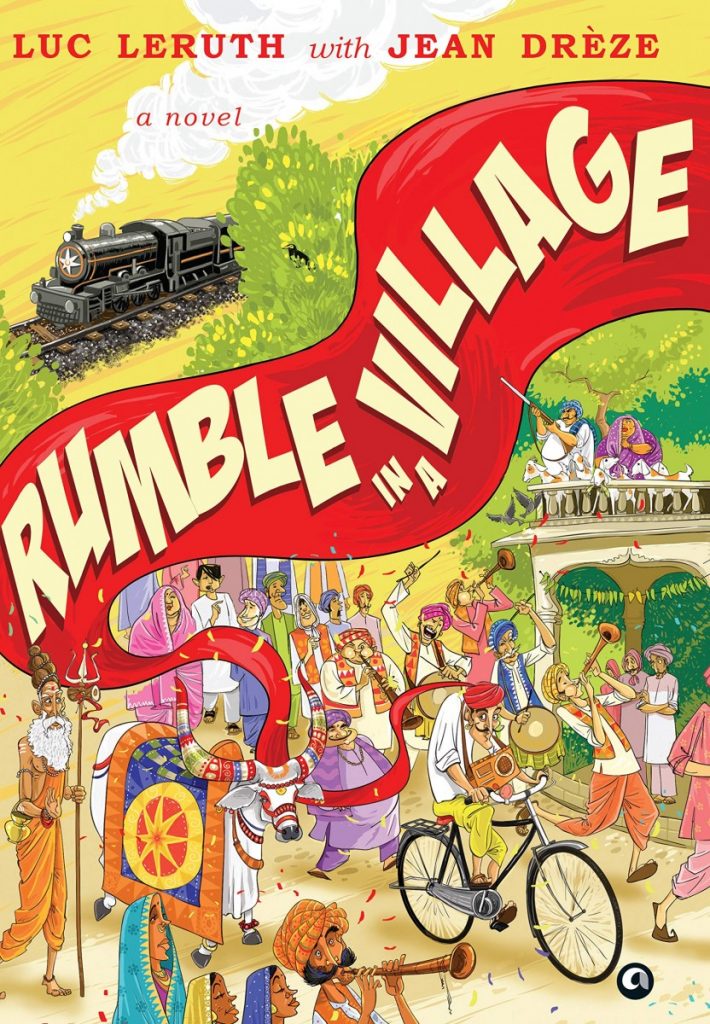 In the novel, the year 1984 is one of both overwhelming atrocities against Dalits (like the years before) as well as dawning, large-scale awareness among Dalits in the village of Palanpur, in Moradabad district, Uttar Pradesh.

The main character in the novel, Anil Singh (a Thakur), is a banker and a well-meaning non-resident Indian (NRI). On a train journey, he confronts a retired Army captain who has been instrumental in building that awareness. Anil wonders how the captain has such a grasp of local happenings; he later discovers that the captain holds secret, underground meetings and is a mentor of sorts to Dalits in Palanpur.

Dreze has not only captured the rumbles between Dalits and non-Dalits, but assesses their potential to transform the social equation between them. For an average Indian, selfishly or otherwise clinging to his traditional placement or caste status in society, it may have been difficult to notice and care for such routine rumblings, leave alone their future repercussions.

The story starts with the murder of Rajendra Pratap Singh, Anil’s uncle, by three gunshots, which summons his nephew home from London. Anil becomes witness to rural life, and the kaleidoscope of class, caste and gender, as he unties all the knots in the mystery. The narrative is anchored in Anil’s father’s diary, written in the first half of the 20th  century, which keeps a genealogical record of the characters in the novel and serves as an archive of historical events. Anil’s own experiences in 1984 are ingeniously used as a yardstick to measure the changes that have occurred.

Also read: The Problem of Being a Dalit in the Communist Movement

An older Chamar servant woman, Neetu, is charged with shooting Anil’s uncle, using his own rifle. Anil asks the captain, his co-passenger on the train, “Why does the police assume that she stole my uncle’s rifle? She could have brought her own.”

“The Captain laughed so hard that Anil thought that the train would derail. ‘A widow, a Dalit woman with her own rifle?’ The whole compartment relayed his laughter.”

Such was the ignorance of an NRI. Rampal, another Thakur, explains to him later: “A Chamar does not have a rifle. It’s a Thakur privilege.” After meeting Neetu in police custody, Anil thinks, “The Captain was right: a police station could be a dangerous place. Especially for Dalits.”

Anil realises that she is wrongfully confined and falsely charged with the murder of his own uncle, and decides not only to bring the true culprit to justice, but to spend his dead uncle’s ill-earned money (he was the only legal heir) on the welfare of Dalits. As economists, the authors perhaps want their protagonist to be a role model, so suggest this development model of redistribution of wealth.

The Captain, an important character, strikes a resemblance to Kanshi Ram, who worked for many years amongst the Bahujan communities in Uttar Pradesh. When I was an IAS probationer, at the Lal Bahadur Shastri National Academy of Administration at Mussoorie, Kanshiram sent an emissary to reach out to Dalit probationers and build a concept of brotherhood, or sisterhood, to stand against discrimination and atrocities – and to enlist ideological support to his organisation. Among the many he approached, only a few stood by him though others did empathise.

In his notable novel Vellai Yanai (White Elephant), the popular Tamil writer Jeyamohan described how the protagonist, a British collector in Chengalpattu district of Madras Presidency, supported the cause of ill-treated and famine-struck Dalits in 1877.

Jeyamohan could have attributed the collector’s gesture to his official duty or a general sense of humanity. Instead, he chose to go deep into the English collector’s genealogy, arriving at a conclusion that his own poor economic and social status, as a Scottish carpenter’s son, shaped his sympathetic outlook towards Dalits.

Unlike Jeyamohan, Luc Leruth and Jean Dreze don’t have to adduce any reasons for Anil’s kindness towards Babu, Smita and other Dalits in Palanpur. Probably, they thought that his non-resident status was sufficient to explain his concern for justice.

Anil has distanced himself from Indian caste society by living abroad; he also doesn’t hesitate to condemn the sinful traditions of his own uncles and relatives. The authors too are quite different from many non-Dalit writers, who sing the praise of their forefathers and caste traditions, indirectly and directly in their works of art.

Living among the mainstream communities in Palanpur, Anil closely witnesses all kinds of discrimination and exploitation. He tries to understand how a caste-based power structure reproduces itself, in the continuing relations between land-owning and landless castes. This is crucial. None of the right-wing or left-wing political parties paid attention to targeting a feudal structure inextricably hooked to the caste system.

When an economist ventures into writing a novel, unlike a literary writer, it’s apparently impossible for him to move on without commenting on factors hindering the growth of the village economy. In his preface, Dreze accepts that “Caste, inevitably runs through this novel” and that “it would take much longer than a one-year stay to understand the subtleties of caste in a village like Palanpur….” While he quotes B.R. Ambedkar to support his general observation of the village life (“What is a village but a sink of localism, a den of ignorance, narrow-mindedness and communalism?”) he also looks at the positive side – of love, compassion, friendship – only to soon blame a social environment that “is not quite designed to help them flourish”.

The authors bring variety to the text with vivid and interesting descriptions of village markets, events like marriages, festivals and elections. The illicit brewing of liquor, prostitution, petty thefts and the rampant corruption at the government offices do not escape their attention.

Kishan Lal tells Anil: “The Palanpuris did not trust government doctors, who were costlier and not necessarily successful, than a random injection.” And Anil observes, “It was true, that if one ran a calculation of the respective probabilities of surviving the doctor, or a random injection doing nothing, the second proposition would most likely emerge the winner.” I recall my tenure as sub-divisional magistrate at Karchana, in Allahabad district in the year 1982, and as a probationer the year before at Sultanpur. I found the government healthcare facilities were utterly poor in both the districts, and Anil’s comments are far from exaggeration.

Anil does not spare the unemployed and lethargic men in the village, playing cards or clustering around the teashops. Babu’s unwilling and half-hearted work and his lack of initiative, Rampal’s ‘CEO-like’ behaviour are captured well. While a banker from London didn’t mind working for a daily wage in Rampal’s sugarcane field, Rampal proudly declares, “I never do anything except guide the cart and give orders if there’s something important going on. I do not even fetch a glass of water…”

Smita, an awakened Chamar teacher, and Pat, Anil’s girlfriend, appear in the middle of the novel and they strike a progressive alliance. While dwelling on minute details of village life, the novel gravitates towards the main events – namely Rajendra Pratap Singh’s murder and later, a rape.

Palanpur’s communal division, between dominant communities and the others, surfaces over the question of improving a school versus constructing a temple. Few writers could have captured these conflicts with their underlying nuances as well as Jean Dreze and Luc Leruth.

P. Sivakami is a pioneering Dalit woman novelist, social activist and former IAS officer. She is the author of six novels, as well as short stories, poetry and several essay collections. She had served as an advisory member for the Sahitya Akademi, India’s national academy of letters. She was awarded a Fulbright fellowship in 2017.