Confined within walls, as we clock the hours of this interminable lockdown, J.M. Coetzee’s 'Waiting for the Barbarians' unlocks windows of the imagination.

A still from the 2019 film adaptation of 'Waiting for the Barbarians', starring Johnny and Depp and Robert Pattinson. Photo: Iervolino Entertainment

J.M. Coetzee’s novel, Waiting for the Barbarians, is a lens into the machinations of oppressive systems like few others. Centred around the life of a magistrate posted in a frontier settlement in an imaginary “wild” land, the novel, in many ways, tells the story of our times.

Plotted around a crisis of civilisation and concerns arising out of a system run by institutions that are nothing but illusory in nature, Waiting for the Barbarians has a universal, rather than specific, appeal. Coetzee’s imaginary frontier is a place where institutions meant to deliver justice serve the very opposite purpose. It is a place where prisoners are wrongfully and wilfully detained and tortured. Where justice does not have even notional value. 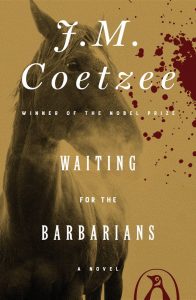 The magistrate is not an archetypal rebel. Nor is he a revolutionary standard bearer. Getting on in age, the hitherto guardian of the frontier acts out his defiance in quixotic ways. A defiance that stems not from prescribed teachings but the conflicts jolting his personal conscience. Pulled apart by his dilemma, the magistrate moves into a dangerous territory wrought by violence. His actions bring on inevitable doom. Perceived as a friend of colonised ‘others’, the barbarians of the title, the magistrate himself becomes a victim of the empire of which he is a functionary.

The dystopia plays out against a beautiful frontier landscape:  the snow covered ground, moonlit nights, “wind-eroded clay terraces merging at its extremes into banks of red-dust clouds and then into the yellow hazy sky.”

Confined within walls, as we clock the hours of this interminable lockdown, the novel unlocks windows of the imagination. Coetzee’s elegant prose liberates the reader–even if temporarily–from spatial captivity. “I carry my sleeping mats out to the ramparts where the night breeze gives some relief from the heat. On the flat roofs of the town I can make out by moonlight the shapes of other sleepers… in the darkness a pipe glows like a firefly, wanes, glows again … from the sky thousands of stars look down on us. Truly we are here on the roof of the world,” Coetzee writes.

The beauty of the landscape and the ugliness of the system play against one another.

Ours is a time when the word “incarceration” conjures multiple images and anxieties – from the pandemic-spurred claustrophobic lockdown to other kinds incarceration that continue unabated. Even with the fear of contracting an infection in crowded places, political dissidents are still being thrown into jails for their political beliefs. The ongoing medical emergency is also a political emergency. In different ways, incarceration at home and in prison carry a sense of helplessness for many.

Also read: The Island Isolation of Our Times

Coetzee’s empire “created the time of history”. “One thought alone,” the author writes, “preoccupies the submerged mind of the empire: how not to die, how not to end, how to prolong its era. By day it pursues its enemies. It is cunning and ruthless, it sends its bloodhounds everywhere.”

Waiting for the Barbarians is a disturbing portrayal of collusion, of the complicity rendering irrelevant the very idea of justice, paring trials down to nothing but charades. A show designed entirely to reproduce the power of the powerful.

Serving the empire for decades, the magistrate of the frontier staved off a conflict between the barbarians and the empire. In the novel, the barbarians stand in for an allegorical ‘other’; an ‘other’ that varies from country to country, and from epoch to epoch.

The equanimity of power relations is broken when the magistrate, after unquestioningly guarding the frontier for decades, is jolted into a cathartic awakening by the sudden state of Emergency imposed by the empire. The narrative turns a  corner when the empire’s special forces begin to go after the barbarians. His relationship with the empire ruptured, the magistrate is plunged into an agonising dilemma as Colonel Joll – leading the attack – brings back prisoners to torture them in the barracks.

Regardless of the frontier’s imaginary geographic location, the novel resonates with the unravelings at home and the wider world.

“In the shelter of our homes, with the windows bolted and bolsters pushed against the doors, with fine grey dust already sifting through roof and ceiling to settle on every uncovered surface… we sit thinking of our fellow creatures out in the open who at times like this have no recourse but to turn their backs to the wind and endure,” writes Coetzee.

Who are our “fellow creatures” in these times? Desperate migrant workers, victimised Muslims, political dissidents? All of the above? The vulnerable, who, in times of such adversity, have to “turn their backs to the wind and endure?” What happens to collaborators who keep oiling the wheels of the system?

Not all collaborators are driven by the same motive. For some, particularly those in regions riven with decades of conflict, collaboration can become a bare means of survival. But that form of collaboration, too, is not free from dilemma.

The thought brings to mind Mirza Waheed’s novel, The Collaborator, set in Kashmir, where the unnamed 19-year-old narrator works for an Indian army captain. His job is to collect identity cards and weapons of corpses in the Valley. The novel raises several questions about collaboration coerced by a rogue regime: why was the young man forced to become a collaborator? How long can he continue to work with an alcoholic army captain who boasts of killing Kashmiri boys? But this is not the only kind of collaboration we are familiar with. There are other collaborators, those who join the ‘enterprise’ of empire driven by ambition, and a singular lack of commitment.

Against this background, Coetzee’s magistrate charts a different course, being moved by ordinary emotions like compassion and fairness. Maybe it is this nuanced focus on the magistrate’s complicity with a violent, repressive system that prompted anthropologist Veena Das to recently write: “Coetzee does not want to cede to the desire of the reader to find an external authority, to tell her what is the ‘correct’ ethical response in such circumstances. Instead of commanding or prescribing, Coetzee takes to describing what is entailed in ethical awakening, to defeat the very desire for ersatz posturing.”