The Return of the Poet, Rohan Chhetri

A meditation on the poet's new collection, intricately titled, 'Lost, Hurt, or in Transit Beautiful'. 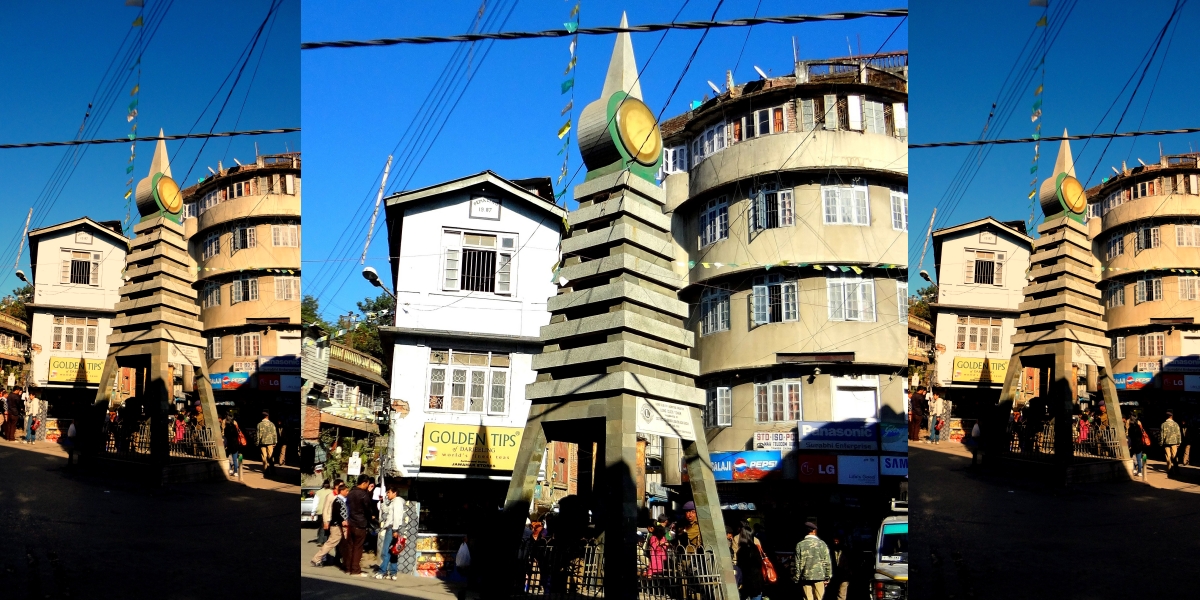 This is not a review, but a meditation on Rohan Chhetri’s new poetry collection, intricately titled, Lost, Hurt, or in Transit Beautiful.

It is difficult to conclude whether Chhetri has paid more attention to life, or to language. I am being hyperbolic. One pays attention to language when life gets more and more difficult to understand, and difficult to hold on to, with the ordinary resources you receive at home, school and neighbourhood. Sometimes one’s relationship not just with home, school and neighbourhood, but the world itself, gets interrupted by untimely violence. It becomes urgent to understand what this violence is and where it comes from. The troubled soul of language, the troubled language of the soul is difficult to access in proximity. There is an excess in this access. The poet must seek the elsewhereness of language, and go elsewhere to find it. The modern poet leaves home not to find another world, but another language. Chhetri left home to return home with a language of his own, that he has gathered elsewhere. 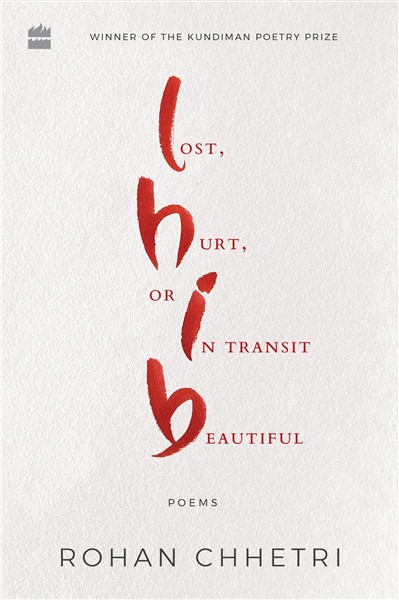 I am offering here, a twist to Martin Heidegger’s evocation of the homeless poet in his essay, ‘What are Poets For?’ delivered on the 20th anniversary of Rainer Maria Rilke’s death. Heidegger paints the modern poet as someone homeless in language, facing the unheimlich, the uncanny. The poet, I am arguing, seeks homelessness in order to return home, protected by an-other language. If the world doesn’t protect us, language is our last resort. It must protect us from the violence of memory. We must become other.

The predicament of the modern poet is also that he does not want to tell the story of his people to them (alone). He wants to tell that story to the world. Chhetri is the modern, homeless bard. He is intensely alienated from home in a unique way. A fate he shares with other kinds of poets in history, who have lived in political, or self-seeking, exile. This alienation is unlike the Marxian idea of the alienation of labour: Chhetri seeks alienation to be alone in language, where he may be able to share with us the forest of his silences. Chhetri is the lone man in the poetry factory, producing his lonely labour of language, with people and ghosts for company. It is uncanny.

In ‘King’s Feedery’, Chhetri declares an emergency, of a place and its people. The poem is Márquezian in the sense that it evokes love through the eyes of the old and the dying.

‘The Singing Bone’ reminded me of Akira Kurosawa’s Dreams. Each stanza, like one cinematic snapshot after another, throws a particular, oblique light on the place. We learn about the nature of lived time in the place, the cyclic time of the return of the shaman, as the place is displaced, severed from within.

In ‘Lamentation for a Failed Revolution’, Chhetri mentions the “autocrat”. I wonder why he uses this universal designation and representation of the man, instead of his specificity. I wonder who – not just what – the autocrat is. In the poem we read, ‘On the TV we heard a speech about time / having come to replace our tongues.’ If modernity was heralded as a new time, a time for change and freedom, it also came to be a time for new terrors, and modes of colonisation.

Modernity is a scissor that often cuts off its own tail. Chhetri’s grandfather returns in the poem, his shadow looms with a political mythology of silences, absences.

The poem goes, ‘Every failed revolution is a child / learning the edge of himself’. Here the idea of revolution is not a prototype, not purely Marxian. The idea here is not liberating the working class, but liberating a people, a community. Maybe it is not revolution as such, but a revolt, and a resurrection:

First, the soldiers thought the roaring
came from within the river, some force
answering the fog. Then they saw us, the widening
pack of us moving through trees. They dropped
their guns, scurried to the barracks downtown.
Next morning we woke and we brushed and braided
each other’s hair and we marched and we had no choice

This poem, like others in the collection, also offers details of the physical wounds inflicted on a people.

Summon the scenes, not just the names. It is not enough to remember names, something commonplace today about memorializing resistance. The scenes matter. They are more tied to history than names. The names, in a way, don’t matter. The names must rest outside history, outside the history of names and naming. Their names need to be set free from the unending violence of history. Let the scenes remain as a reminder of what took place, and what history is capable of.

The last section of the poem begins with:

Hate is woven in concentric circles, one hate spirals into another, distinguishable and indistinguishable from each other, same wool different colour, knitting our bodies. Hate is measured, or it can be measured, in the body and what it does to the body, of what body does to another in hate. Hate is an encounter that is disfigured in advance, suffering a painful precision without exit. Hate is breathing something unbreathable. That is what makes hate suffocating.

‘The Indian Railway Canticle’ is a poem journeying time, many journeys overlapping each other, a journey across time, of windows of landscapes, the sorrow of farmers sowing crop, animals crossing the railway line, couples making love clandestinely, and other striking scenes. The significance of these journeys is not about where you start from and where you reach. It is about what you collect on the way. The memory of trains is always the memory of the fleeting, what you manage to snatch for yourself, before it is snatched away from you, like (a metaphor of) life.

Grief returns with a new awareness and sensibility in ‘National Grief’, where the poet writes, ‘We grew heavier not with grief but numbers’. The banality of history and its cycle of violence is that it is not death you mourn, but deaths. Death is a number. You mourn the numbers. Death loses meaning in numbers. I remember a line from a Shrikant Verma poem from Magadh, ‘In Kashi / they are counting the dead.’ When death becomes deaths, we are talking about war. Chhetri ends the poem like this: “History, that slow child, / kept working on some infinite homework.”

I shall end with ‘New Delhi in Winter’, where Chhetri writes, ‘At the parties, I got drunk & cursed everyone’. I read it as an inability to share pain in the city. The city is where you meet everyone, and you can grieve to no one. There are too many landscapes to explain, too many ghosts to name, too many stories to tell. Too much morbidity that is forgotten in curses directed at others, but meant for oneself. 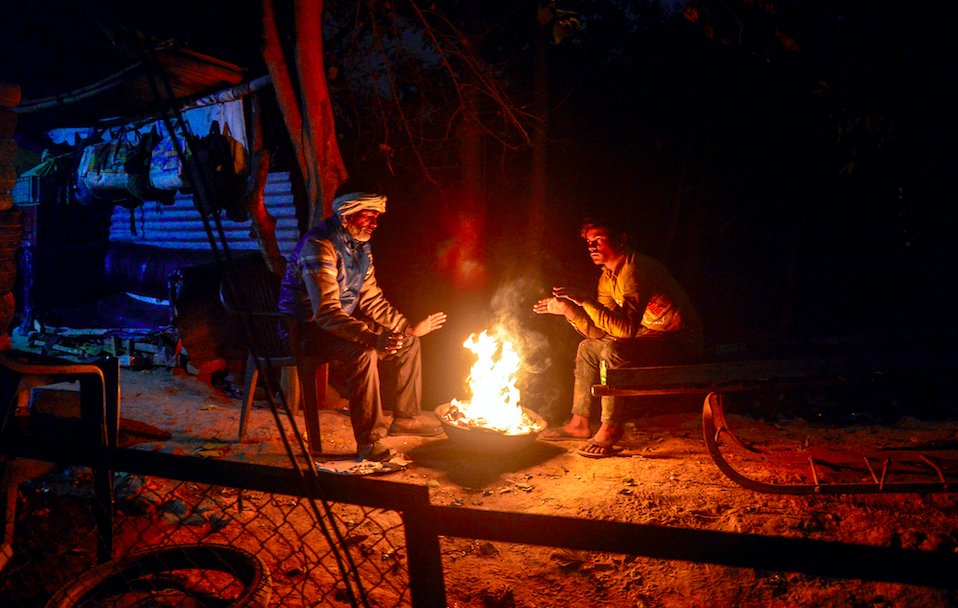 People sit near a bonfire to warm themselves during a cold winter morning, in New Delhi. Photo: PTI

Chhetri writes almost at the end of the poem: ‘The body itself has no use for hope. / It hardens in grief to live beyond hope.’ Hope is anthropological. It lives in the body. Such a concrete idea of hope can only belong to a subject of hope, who is subjected to the apparatus of hopelessness, where the state of being encounters the violent being of the state. It doesn’t just stop at that.

In Chhetri’s poetic world, the animal lurks at every corner, sometimes as presence, and sometimes, metaphor. That ‘pale animal’ as he writes in ‘New Delhi in Winter’, ‘with its face resembling the inside of our death / masks.’ This is the anthro-zoological space in the poems, where the human and the animal is an interface, just as between state and people, you and the other, and the palatable presence not just of violence (which is all too human), but cruelty (which is human-to-animal). This dimension adds concreteness to Chhetri’s poetry. There is no metaphysics in these poems. The poet speaks of encounters that are territorially bound by memory, because the violence happens in the name of territory and hence, liberation is also constricted by it. It’s the beast of territory that Chhetri is grappling with, and tearing himself out of. There is no escape except in a writing that revolves around time, like the roads left behind.

In Untimely Meditations, Friedrich Nietzsche calls the human being a “remembering animal”. There is a memory of the will, where the animal is abandoned in the pursuit of the human. It is that will that inhabits and exhibits its powers in Chhetri’s poetry.

Manash Firaq Bhattacharjee is the author of The Town Slowly Empties: On Life and Culture During Lockdown (Headpress, Copper Coin, 2021), Looking for the Nation: Towards Another Idea of India (Speaking Tiger, 2018), and Ghalib’s Tomb and Other Poems (The London Magazine, 2013).