'Witness/Kashmir 1986-2016' features nine Kashmiri photographers from different eras, who have put together their version of the Kashmir they grew up.

Witness. The name itself revels the meaning. It is witnessing Kashmir, known to be the world’s most militarised zone, a part of geopolitical faultline between India and Pakistan since 1947.

Witness/Kashmir 1986-2016 features nine Kashmiri photographers from different eras, who have put together their version of the Kashmir they grew up and has been compiled by Sanjay Kak. The book features the work of Meraj Ud din, Javeed Shah, Dar Yasin, Javed Dar, Altaf Qadri, Sumit Dayal, Showkat Nanda, Syed Shahriyar and Azaan Shah.

Although a coincidence, the timing of the book’s release is important. On Wednesday, February 16, Indian army chief Bipin Rawat spoke harshly about dealing with “those who obstruct” the army’s operation, while he was at the wreath-laying ceremony for deceased Indian soldiers. General Rawat told reporters: “We would now request the local population that people who have picked up arms, and they are the local boys, if they want to continue with these acts of terrorism, displaying flags of ISIS (Islamic State) and Pakistan, then we will treat them as anti-national elements and go helter-skelter for them.” 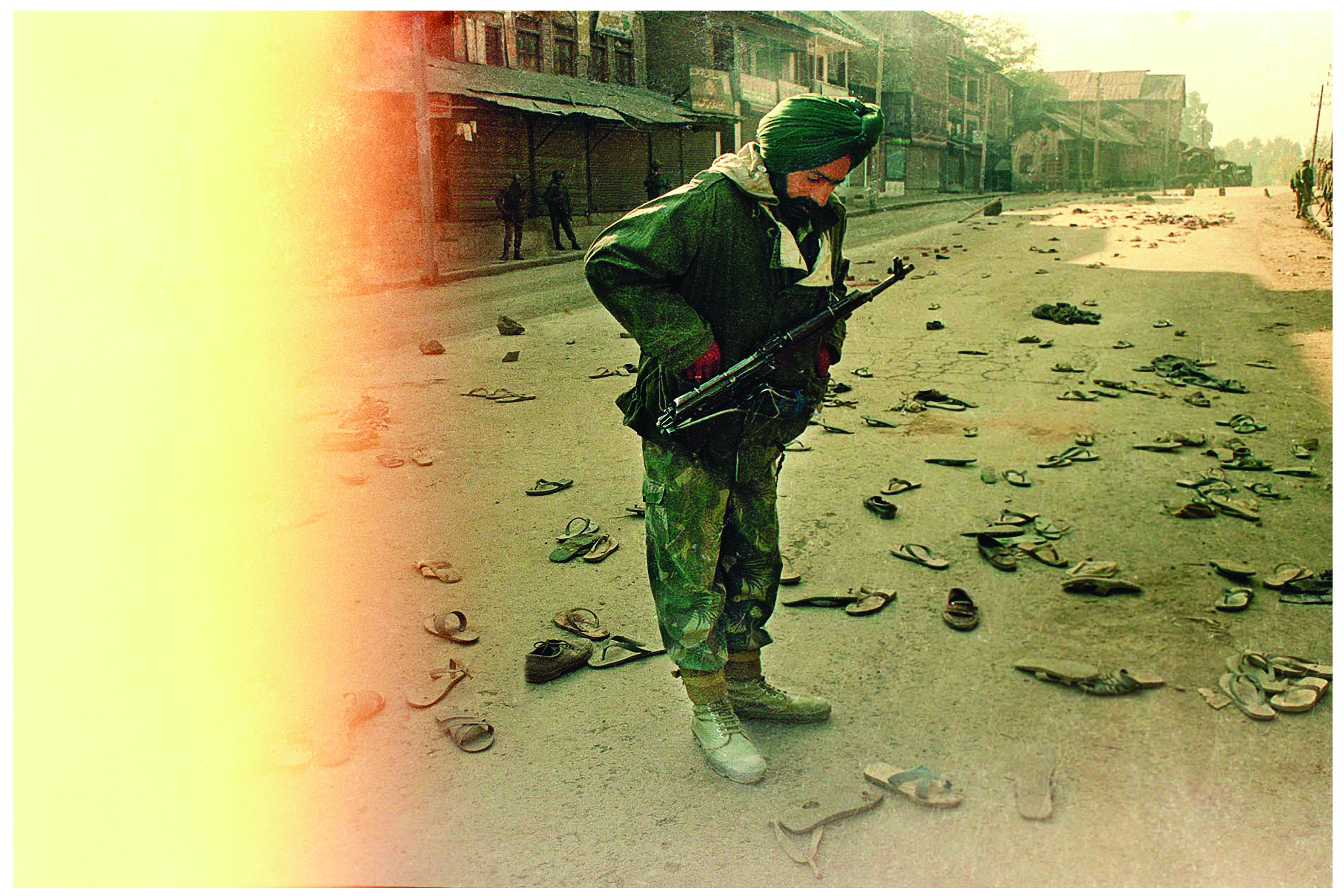 The oldest of the photographers featured, Meraj’s images are historical. It shows how it all started –  the emergence of the militants, who pose like movie stars while gun-toting children move freely in the militant zone. The body of Justice Neelkanth Ganjoo (who sentenced Maqbool Bhat for the murder of CID officer Amar Chand in 1966) lying on the streets as bystanders watch reminds us of how things started in Kashmir. The images are proof of the anarchy unleashed both by the militants and the Indian security forces. Soon we see images of Mast Gul and Ikhwani leader Kuka Parray appear. Many have read about these people but seeing them in these pictures is a historical journey in itself. One of the most striking images by Mehraj is the one from Bijbhera, site of an infamous massacre of civilians by the security foces.  We see footwear strewn around while a soldier looks on. The image portrays the word ‘fear’, which still exists in the streets of Kashmir. 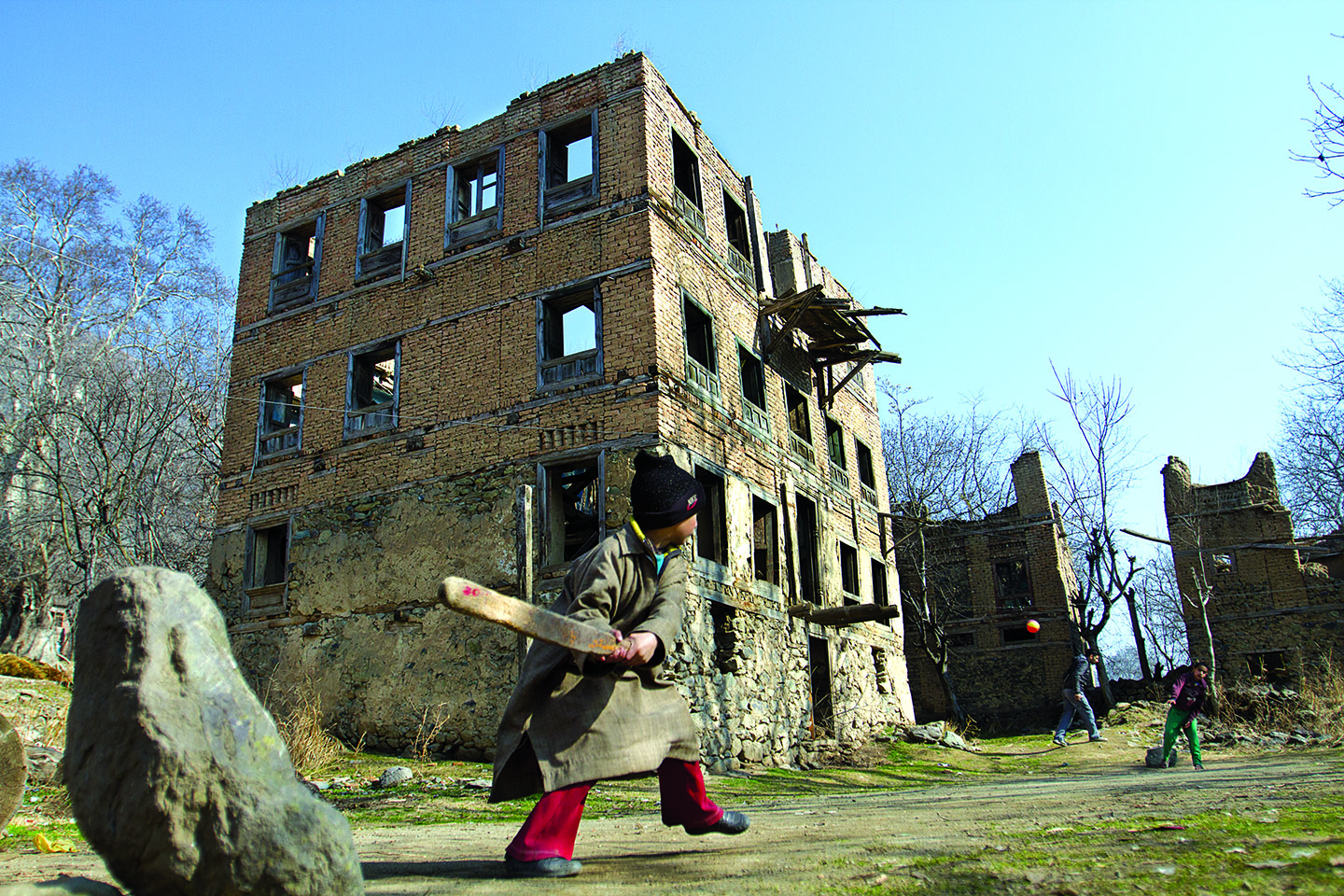 Self-taught photographer Javeed, formerly with the Indian Express, uses colour to depict the Valley. Javeed’s photograph of Mufti Mohammed during an election campaign, sitting on a throne-like red chair, cannot be missed. His compositions are pictorial but with a touch of daily news.

Next we move to Dar and Qadri, both very competent news photographers supplying images of Kashmir to the world. Dar and Qadri photograph the worst conditions but with composed minds. Take, for instance, Dar’s image of a woman standing after a fire broke out. Surrounded by destruction, the woman appears calm even though she is helpless. Dar composes his images in colour, keeping the beauty of Kashmir in the backdrop. Qadri is more straightforward. His images are a reflection of his own identity. The anguish is visible. In his younger days, Qadri was used as a human shield by the Indian security forces. He hasn’t forgotten those days. Each of his images reflect the Kashmiri pain, be it the one capturing the bodies of slain militants or a soldier pointing his gun at a protester. 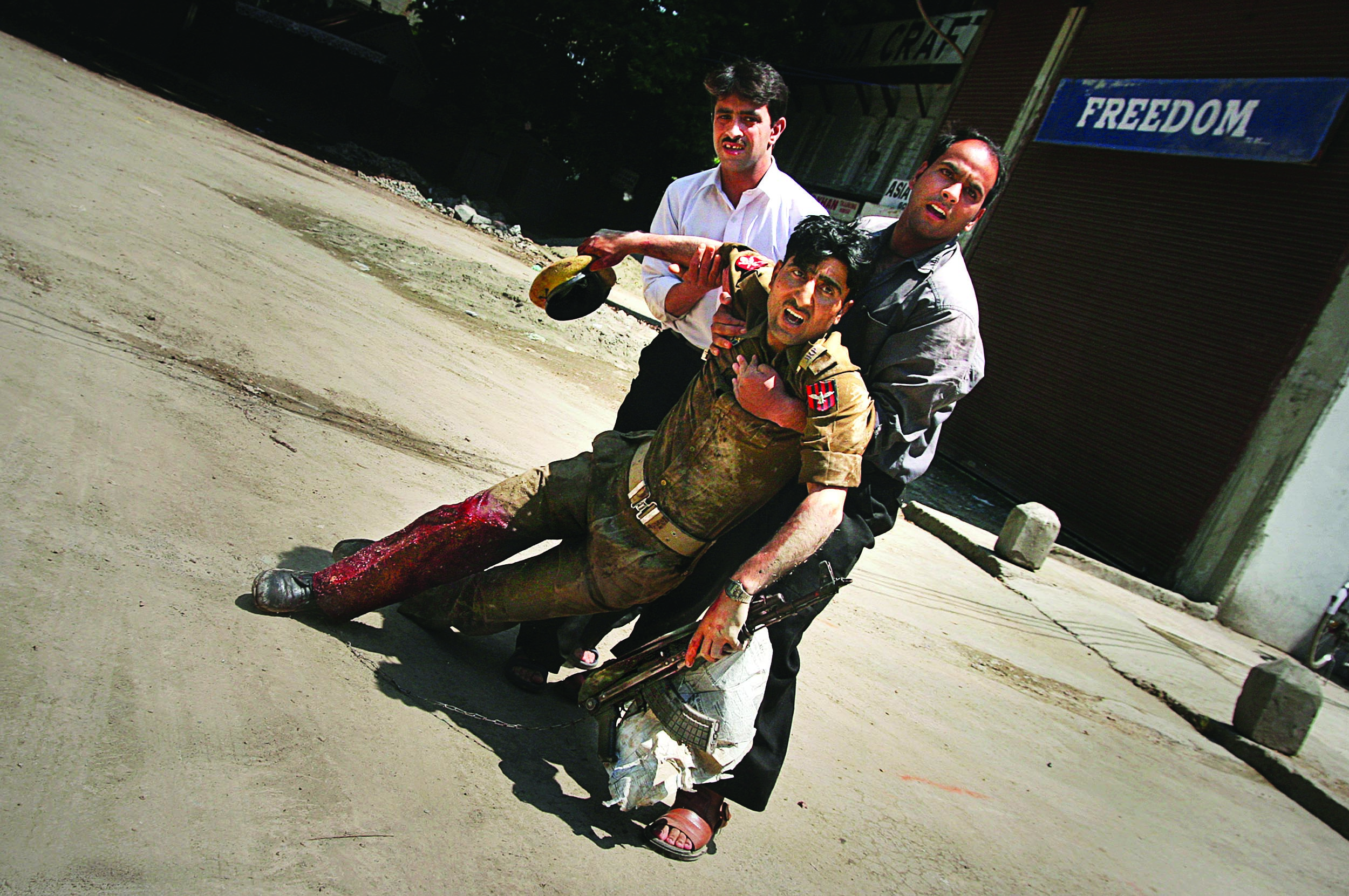 I remember Yasin photographing me in 2010 in Shoura when I was hit by a stone while covering a protest. Yasin loves to be in the middle of the action. His images are a glimpse of the daily street battles between the police and protesters. An aerial image of the Kashmir floods is also included in his portfolio. 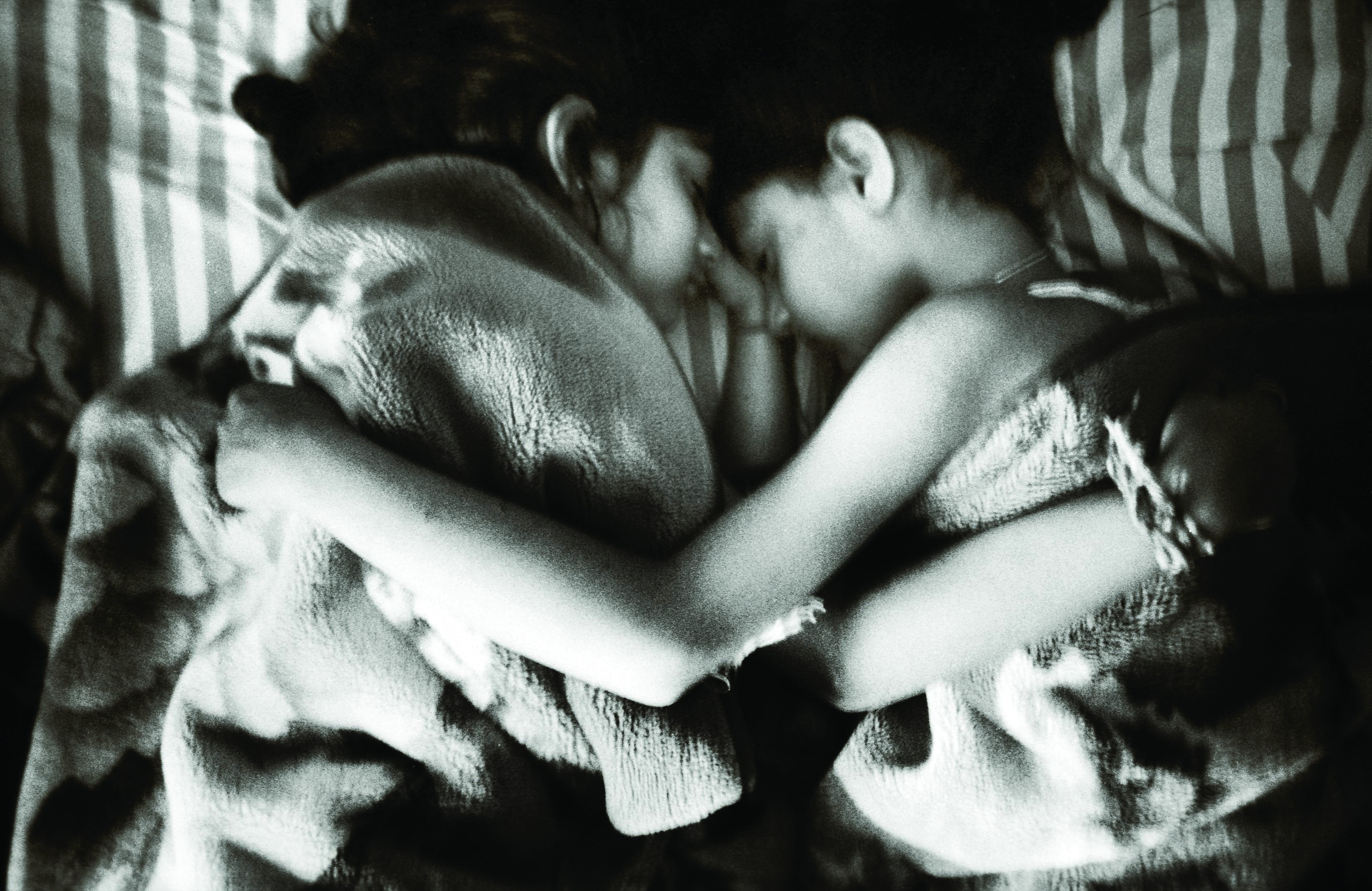 Shahriyar’s images featured in the book capture some of the latest happenings in the state, including the great floods of 2014. Shariyar has also captured some images on ‘Ashura’ (the Shite martydom procession).

Nanda tries to be as invisible as he can when taking photographs. With a small camera he walks the streets while looking for stories. His portraits of ordinary Kashmiris stuck in the middle of conflict are heart-wrenching. 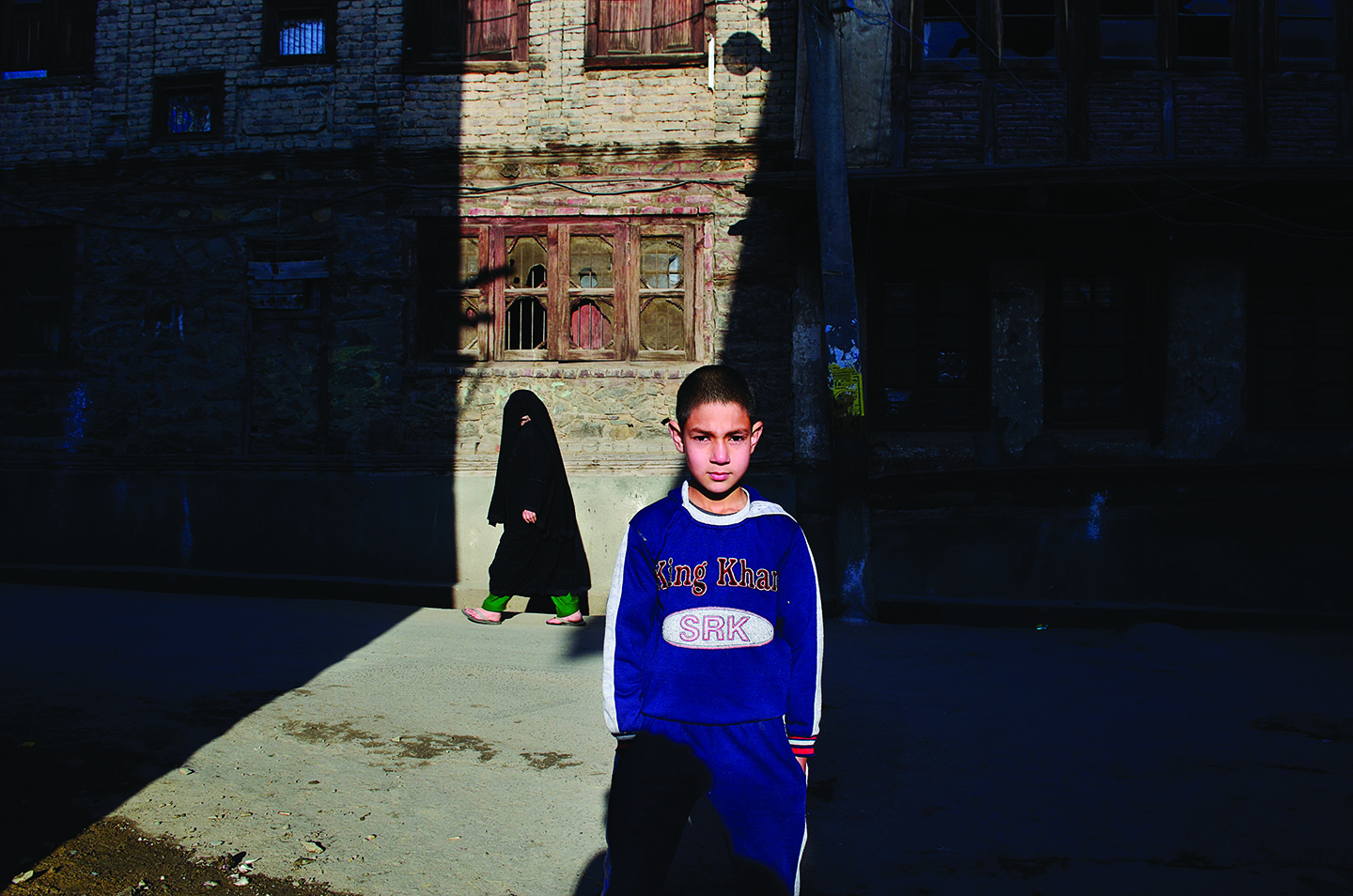 Azan, is the youngest among the nine photographers featured in Witness/Kashmir. He has photographed Kashmir as it is at present.

Although the section on pellet gun victims doesn’t have too many images, a startling image by Yasin is included, showing a pellet injured face. 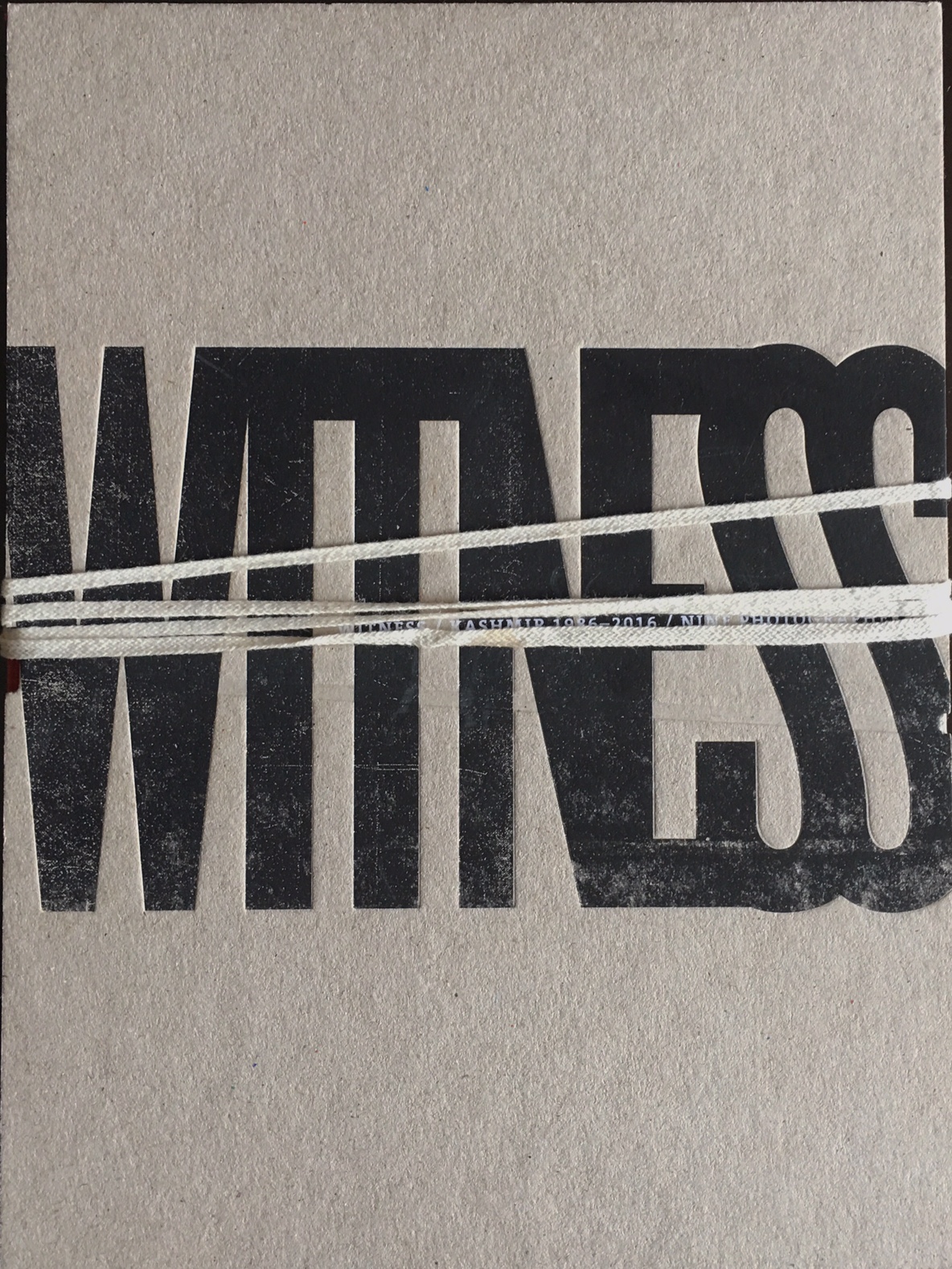 Witness/Kashmir is not the first kind of book on the state, but is a visual portrayal of the situation in the Valley. But, although the casualties are higher among civilians, it would have been good to include images of injured security personnel too.

Also missing are images capturing the Kashmiri Pandit exodus, although Javeed does include some images of empty houses after the exodus. This is, of course, the product of the times. As the book’s editor Sanjay Kak notes in his introduction, “Inexplicably, some of the most argued events of these decades are absent from the photojournalism of the time. For example, the migration from the Kashmir valley of more than 200,000 Pandits, its Kashmiri-speaking Hindu minority, as victims of fear and violence … Beginning in the early 1990s and stretching through that decade, these large-scale departures seem to have passed largely undocumented, and remain a gap in the photographic archives of available newspapers and magazines, both in Kashmir and in the Indian media.”

Despite these two absences, the book captures the turmoil of contemporary Kashmir.