A Book that Explores the Unjust Abstraction of Disappearance

Hisham Matar's The Return is a powerful memoir of exile, loss and hope in a fractured world. 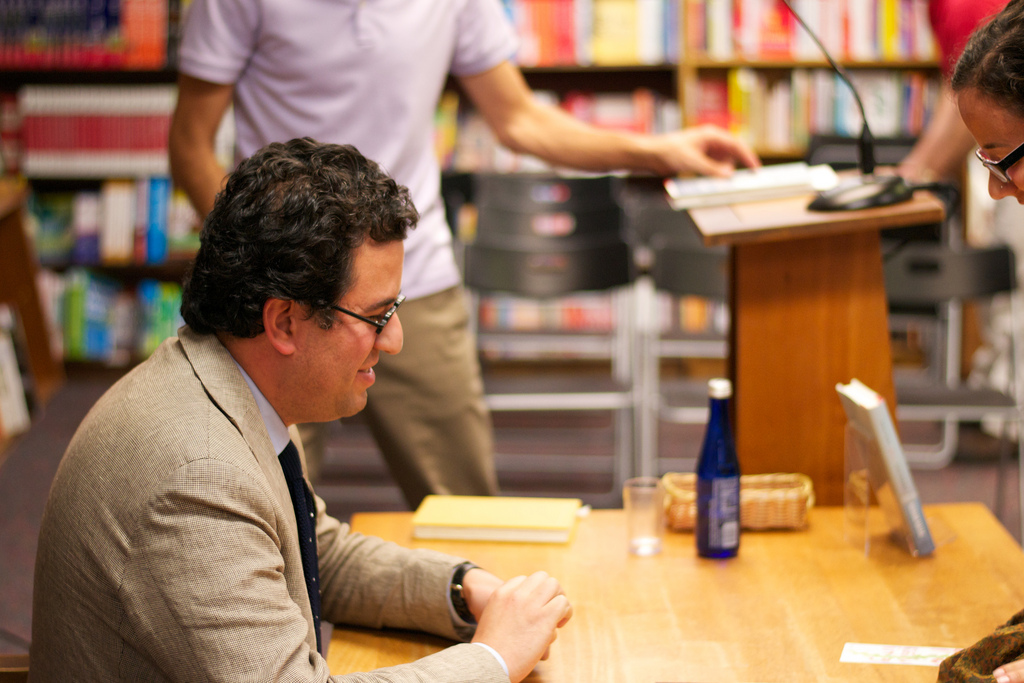 “Joseph Brodsky was right. So were Nabokov and Conrad,” writes Hisham Matar at the start of his latest book, The Return. “They were artists who never returned. Each had tried, in his own way, to cure himself of his country. What you have left behind has dissolved. Return and you will face the absence or the defacement of what you treasured. But Dmitri Shostakovich and Boris Pasternak and Naguib Mahfouz were also right: never leave the homeland. Leave and your connections to the source will be severed. You will be like a dead trunk, hard and hollow.”

In 1979, when he was nine years old, Hisham Matar’s family was forced was forced out of his native Libya and into exile in Egypt, for his father’s dissident activities. Matar grew up in Egypt, and then went to school in England. Meanwhile, his father – Jaballa Matar – continued to agitate against Qaddafi’s regime from exile and ultimately, was kidnapped and disappeared by the Egyptian security forces in 1990. In 1996, Jaballa Matar wrote his family two clandestine letters from Tripoli’s notorious Abu Salim prison. That same year, the regime forces massacred 1276 prisoners at Abu Salim. Jaballa Matar was never heard from again.

The Return is Hisham Matar’s memoir of his long search for the truth behind his father’s disappearance, spanning two decades, and a winding, circuitous route through Cairo, Nairobi, the British Foreign Office, the House of Lords, and ultimately, the Libyan city of Benghazi in 2012, soon after the Libyan revolutionaries have successfully taken it from the Hisham Matar
The Return: Fathers, Sons and the Land in Between
Random House, 2016.

Gaddafi regime. The persistent, sometimes desperate search, leads him on the one hand to his father’s prison-mates, who heard him recite poetry every night: “… in those dark and silent nights when, as Uncle Mahmoud had put it, ‘the prison fell so quiet you could hear a pin drop or a grown man weep softly to himself’, Father sought refuge in the elegiac Bedouin poetry of the alam. The word means ‘knowledge’ or ‘banner’ or ‘flag’, but has always, to my mind, signified an apprehension gained through loss… I picture him reciting the alam in the same voice he used at home, a voice that seemed to open up a landscape as magically uncertain and borderless as still water welded to the sky…” (p. 58 – 9); it leads him to his own relatives, who were imprisoned by the regime along with his father, and spent decades in jail: “With Uncle Hmad, the young man he was at the point of his arrest and the man he had become seemed to exist in parallel, destined never to meet and yet resonating against one another like two discordant musical notes…” (p. 258); on the other hand, it leads him to powerful political figures of a British establishment such as David Miliband and Pater Mandelson, cozying up to the Libyan regime under the justification of ‘leveraged engagement’ (a term originally coined by Margaret Thatcher to defend her relationship with apartheid South Africa), and to Saif al-Islam Qaddafi, the dictator’s son himself.

The contrast between the powerless and the powerful, between those whom power has deprived of everything and those who exercise power with scant concern for the ones who will suffer its impact, is stark. And if Milan Kundera can write that man’s struggle against power is the struggle of memory against forgetting, then Matar is not too optimistic about the outcome of that struggle:

“So much information is lost and every small loss provokes inexplicable grief. Power must know this. Power must know how fatigued human nature is, and how unready we are to listen, and how willing we are to settle for lies. Power must know that, ultimately, we would rather not know. Power must believe, given how things proceed, that the world was better made for the perpetrator than for those who arrive after the fact, seeking justice or accountability or truth. Power must see such attempts as pathetic, and yet the bereaved, the witness, the investigator and the chronicler cannot but try to make reason of the diabolical mess.” (p. 247)

Through the course of the memoir, Matar attempts to negotiate two complex and fraught relationships: the first is with the homeland, from the perspective of the exile (“Guilt is exile’s eternal companion. It stains every departure.” (p. 105)), and moreover, of an exile whose father was a passionate opponent of the regime, but who finds himself strangely ambivalent to the revolution, when it finally comes:

“Revolutions have their momentum, and once you join the current it is very difficult to escape the rapids. Revolutions are not solid gates through which nations pass but a force comparable to a storm that sweeps all before it. One of Turgenev’s most affecting characters does not come from his best-known novels. Alexey Dmitrievich Nezhdanov, the hero of Virgin Soil, Turgenev’s last novel, is the illegitimate son of an aristocrat. He is young and trapped between two powerful impulses: a romantic sensibility that makes him ill-suited for absolute certainty, and a revolutionary heart that craves that certainty.” (p. 112)

Readers will recognise immediately the conflicted character of Doctor Zhivago, who is sympathetic to revolutionary certainty, but whose skeptical mind can never be convinced to the degree that is needed. The future of the Russian Revolution, and the present of the Libyan one (occasionally hinted at by Matar during his descriptions of Benghazi) suggest that history might be on Zhivago and Matar’s side.

But much more central to the book is the second relationship, with his disappeared father. Matar contrasts the paradoxically comforting closure of death (“I envy the finality of funerals. I covet the certainty…” (p. 35)) with the lingering agony of the disappearance (“… absence has never seemed empty or passive but rather a busy place, vocal and insistent.” (p. 166)). It is this absence that blocks his attempts to develop any kind of meaningful relationship with the memory of his father. Like Telemachus from Homer’s Odyssey, whose example is constantly on the fringes of Matar’s consciousness, absence, and not knowing, simply does not allow him to reconcile and to move beyond his father’s shadow. Matar writes:

“One of the injustices involved in disappearing a person is a difficult one to describe. It turns the disappeared into an abstraction, and, because the possibility of his existing under the same sun and the same moon is a real one, it makes it hard to retain a clear picture of him. In death the hallmark fades, and not all the memorials in the world can hold back the tide of forgetting. But in life the disappeared changes in ways that are active and elaborate.” (p. 188)

And in fact, there is a curious, inverted relationship between Matar’s public efforts to discover the fate of his father, and his private relationship with him. In an essay on Milan Kundera, Johannes Lichtmann writes that while at a political level, the struggle of memory against forgetting is an attempt to preserve and to remember, at the “existential level” – which is what Kundera was more concerned about – was “man’s struggle to reshape his own past into a livable present.” Forgetting is an essential aspect of that, but absence does not allow for it.

This is not an overtly political memoir, focused as it is on personal experiences of exile and the search for a disappeared father. Neither is it a polemic; Matar’s tone is calm and forensic, reminiscent of the writings of Primo Levi, or of Mourid Barghouti’s great memoir of exile and homecoming, I Saw Ramallah. But of course, politics can hardly be kept out of it. There are a few brief passages where Matar provides a quick history of the colonial Italian’s brutal regime in Libya, and at another stage, about the British establishment’s unwillingness to jeopardise their close relationship with Qaddafi’s regime (let it not be thought, however, that Matar is solely focused on the failings of the West – in one of the most disturbing passages of the book, he recalls how a petition to Nelson Mandela is returned with the words “never ask… such a thing again” (p. 192)); it is here that the calm, almost detached tone, is replaced by a barely-contained anger. These are striking passages, made even more so by their rarity; but even they are not as striking as a politics that is not told, but shown. At one point, Hisham and his family, in separate countries, are watching a football match between Bayern Munich and Glasgow Rangers. Hisham and his mother decide to support Rangers because of the presence of Mark Walters, a black player; the rest of his family are passionate Bayern fans:

“I hung up and went to the local pub, ordered a pint and sat with strangers, watching the match. Twenty-five minutes into the game, Rangers were awarded a penalty. Mark Walters was to take it. I watched him walking back from the ball. I began reciting Surat al-Fatiha. Here was an eighteen-year-old Arab Muslim praying in an English pub for a Scottish team because they had a black player who might or might not have been African, while his Libyan family, exiled in Cairo, were rooting for a German team. Thank God, Mark Walters scored. Two minutes later Bayern Munich equalized. Final score was 3 – 1 in favour of the Germans. It did not matter; it was not the black man’s fault.” (p. 79)

And then soon after, when he calls home:  “Hisham, listen, your cousin is a born Bayern supporter. He started crying the moment your African friend… What’s his name?’ I could hear Mother in the background, saying, ‘Mark Walters’, spoken as if the name belonged to a great philosopher or poet. ‘Izzo screamed the moment this Mark Walters scored.” (p. 80)

That simple incident contains all the political truth that we cannot see. The Return is a powerful memoir of exile, loss and hope, in a fractured world. As Colm Toibin writes, it is destined to become a classic.