Srinath Raghavan's history of US involvement in South Asia – primarily India, Pakistan and Afghanistan – provides a rich backdrop of lessons for today’s US policymakers as they consider dilemmas in the region.

Americans should be more deeply aware of and focused on the importance of India and South Asia. Credit: Reuters 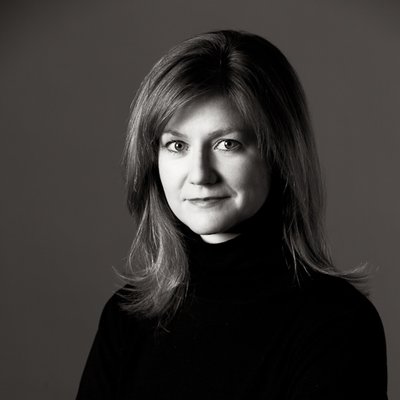 Two years ago, Harvard professors Graham Allison and Niall Ferguson proposed the creation of a ‘Council of Historical Advisors’ for the US president, a body they imagined as being similar to the Council of Economic Advisors. Allison and Ferguson argued that, all too often, US policymakers live only in the present. They would benefit from past analogues to current predicaments.

Srinath Raghavan’s superb new book, The Most Dangerous Place: A History of the United States in South Asia, illustrates exactly why applied history should be part of present foreign policy deliberations.

Raghavan’s history of US involvement in South Asia – primarily India, Pakistan and Afghanistan – provides a rich backdrop of lessons for today’s US policymakers (as well as their subcontinental counterparts) as they consider dilemmas in the region. His book extensively documents how at times, American policy decisions, focused on near-term challenges, have produced undesirable longer-term consequences.

How the US got South Asia wrong

The Most Dangerous Place opens with the 2016 drone strike that killed Taliban commander Mullah Mansour, deep inside Baluchistan. Raghavan sketches the scene, then observes that the killing of Mansour had been intended, in the American thinking, to create conditions conducive to a political negotiation with the Taliban, and to signal to Pakistan that the US would no longer tolerate the “double game” of fighting one set of terrorists while backing another.

That we are all, nearly at the end of 2018, still pondering these same problems frames the book’s larger point: the US keeps getting South Asia (and Pakistan, in particular) wrong. This perspective – for much of the book, the author’s opinion recedes, letting the historical record shine as evidence – should make it recommended reading for Americans focused on foreign and security policy toward South Asia. The core lesson remains all too relevant. 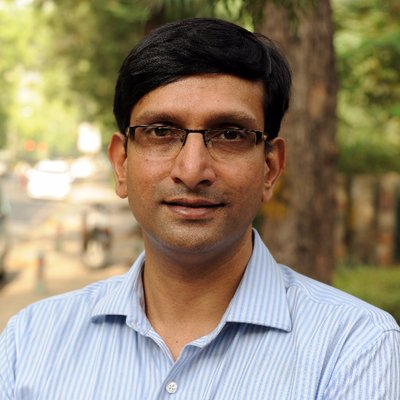 The Most Dangerous Place takes us from the late eighteenth-century, a history of South Asian contact with the US involving merchants and missionaries; through India’s freedom struggle; independence of India and Pakistan; the US alliance with Pakistan; irritants between New Delhi and Washington; the birth of Bangladesh; the anti-Soviet jihad in Afghanistan; Indian and Pakistani nuclear tests; September 11, 2001; and the more recent landmark events of the past two decades. Situating the later chapters covering recent history against the backdrop of more than two centuries gives this book a sense of the sweep of time and serves as a reminder to Americans that our global interactions did not begin with the post-war twentieth century.

In the case of India, Washington and New Delhi have managed, carefully over the span of now four different US administrations and three Indian governments, to overcome the “hesitations of history” and craft a stronger partnership, at last correcting the historic aberration of estrangement throughout the second half of the twentieth century. Differences on many issues of course remain, but the larger framework of partnership is now in place.

Raghavan’s detailed work covers decades of cooperation as well as misunderstandings between the two countries, including the Green Revolution, food aid, technology cooperation, the emergence of the ‘Indo-US Joint Business Council,’ Kashmir, nuclear tests and so many other chapters of the past.

The Most Dangerous Place also covers cultural and ideological history that should be of wide interest. The role that US cultural diplomacy played in connecting American gospel and jazz with Indian audiences – even today, translations and versions of ‘We Shall Overcome’ are sung in South Asia – remains little known to most Americans. Only a limited number of specialists in the US would be aware of the connections between Thoreau, Gandhi and Martin Luther King, Jr. That Raghavan chose to include cultural threads like these in the larger tapestry of his history makes this book even more rewarding.

Also read: Pakistan Is Trying to ‘Play It Again’ With the US

Today, the single most resource-intensive involvement for the US in the larger region remains Afghanistan. Seventeen years on, the path to stability for the country still appears distant, despite various strategies attempted and revised. The hurdles posed by Pakistan’s widely-recognised double game could not be more entrenched.

The misplaced expectations that American policymakers have had from Pakistan provide a throughline in the book. We learn of a 1952 State Department study that “concluded that Pakistani Islam ‘presents a more effective deterrent to the acceptance of communist doctrines than Hinduism.’”(p.159) Later, Secretary of State Dulles would aver that “The only Asians who can really fight are the Pakistanis….That’s why we need them in the Alliance.”(p.169) I flinched to read these “conclusions” but do not doubt the role such assumptions have played in the past.

From caving into demands for arms that were never supposed to be used against India but were; to taking the wrong side in the 1971 horror of bloodshed in East Pakistan that led to Bangladesh; to the late-Carter and Reagan-era support for the Islamist radical mujahideen who would morph into the Taliban and Haqqani Network and other groups undermining Afghan stability and US efforts to aid it – in these and other episodes, the American willingness to believe assurances from Islamabad perpetually leads to disappointment. 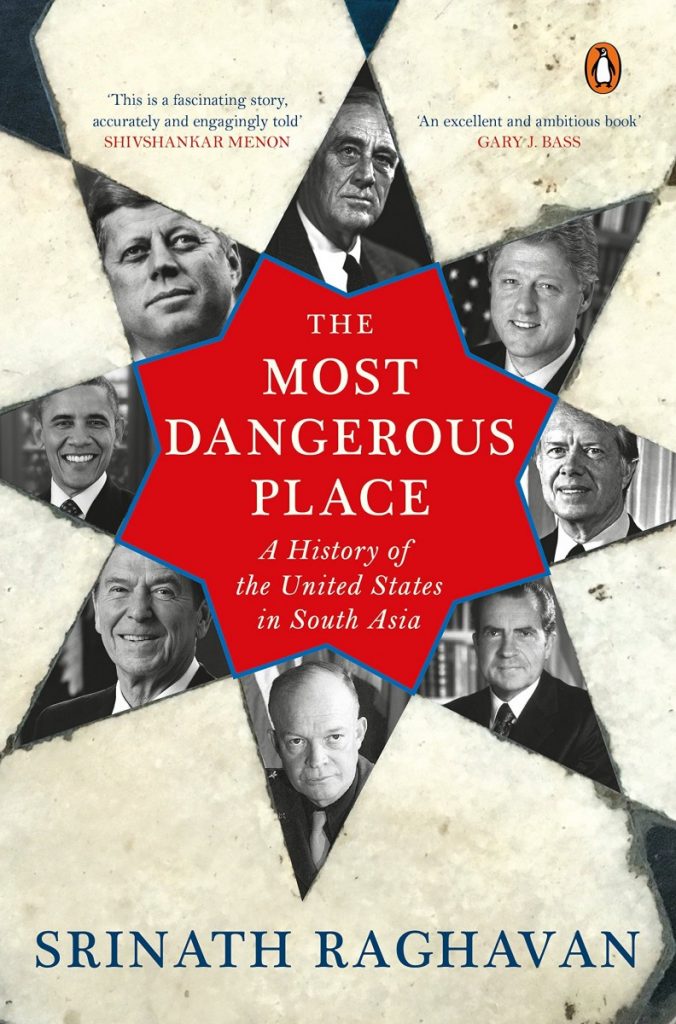 Srinath Raghavan
The Most Dangerous Place: A History of the United States in South Asia
Penguin Random House India, 2018

Scholars Husain Haqqani, C. Christine Fair and others have amply documented the infirmities of US-Pakistan ties; Raghavan’s contribution here is to situate this chronic bilateral misread against the larger story of US policy toward the region in the longer term, and how that ongoing misread affects ties with India and Afghanistan.

Raghavan has another, more meta-argument to make. He believes that the received historical wisdom on South Asia as “peripheral to the concerns of American policymakers” must be reexamined, given the extensive involvement of the US in the region over many decades. He further adds that not only was South Asia more central to US concerns than usually assumed but that US involvement in South Asia shaped the American understanding of its “special providence” as it expanded its reach and ambitions around the world. Indeed the region has “featured significantly in the arc of American ascendancy.”

As a former US policymaker, I found this perspective intriguing and novel. In part it stems from Raghavan’s disciplinary interest in urging historians, who have more generally focused on Britain and India’s colonial and post-colonial experience, to shift their gaze to the region’s more recent history in which the US has mattered significantly. I would love to see more historians answer this call to situate South Asia within narratives of the US quest for pre-eminence in the world – especially against the backdrop of current concerns about where the liberal international order is headed, and what role the US will play given the Trump administration’s departures from bipartisan principles going back decades.

And yet to the question of peripheries, I can offer this: In my own universe focused on foreign policy, it remains challenging to try to gain attention for work on India, or even South Asia more generally, especially compared to the American focus on the Middle East. Going back over the past decade, a rough count of US congressional hearings on the region (including India, Pakistan and Afghanistan) among the Senate Foreign Relations Committee and House Foreign Affairs Committee were around one-third to one-half as many as those focused on the Middle East. This tells us that despite deep involvement – and in the case of Afghanistan, a conflict that has now become America’s longest war – the larger consciousness of that involvement remains limited.

These are imprecise metrics, of course, but do offer a perspective on the present intensity of focus. Attention to India and the South Asian region would gain much from a “rebalance to Asia,” as the Obama administration put it, or an elevated prioritisation of the “Indo-Pacific,” as the Trump administration now calls a much larger geography. But these strategies to shift emphasis still struggle to be fully realised.

Raghavan closes his nearly four hundred page exploration with a note on Walt Whitman’s 1871 poem, ‘Passage to India,’ and adds that “as Americans chart their passage in the years ahead, they would do well to remember Whitman’s invocations of the region’s ‘fierce enigmas’ and ‘strangling problems.’”

Whitman’s verse warns of these perils, but “Passage” closes with an urgent and repeated call: “farther, farther, farther sail!” I take Whitman’s words to mean that Americans should be more deeply aware of and focused on the importance of India and South Asia. The Most Dangerous Place is an excellent place to start.

Alyssa Ayres is senior fellow for India, Pakistan and South Asia at the Council on Foreign Relations, and served as US deputy assistant secretary of state from 2010 to 2013. She tweets @AyresAlyssa.