Review: A Satirical and Political Indictment of the Vietnam War

Nguyen understands that the sheer magnitude of the destruction from the war cannot be effectively captured through bleak realism, but rather, through a style that disavows its own seriousness, that often pushes us to laughter, before making us remember the darkness that lies underneath. 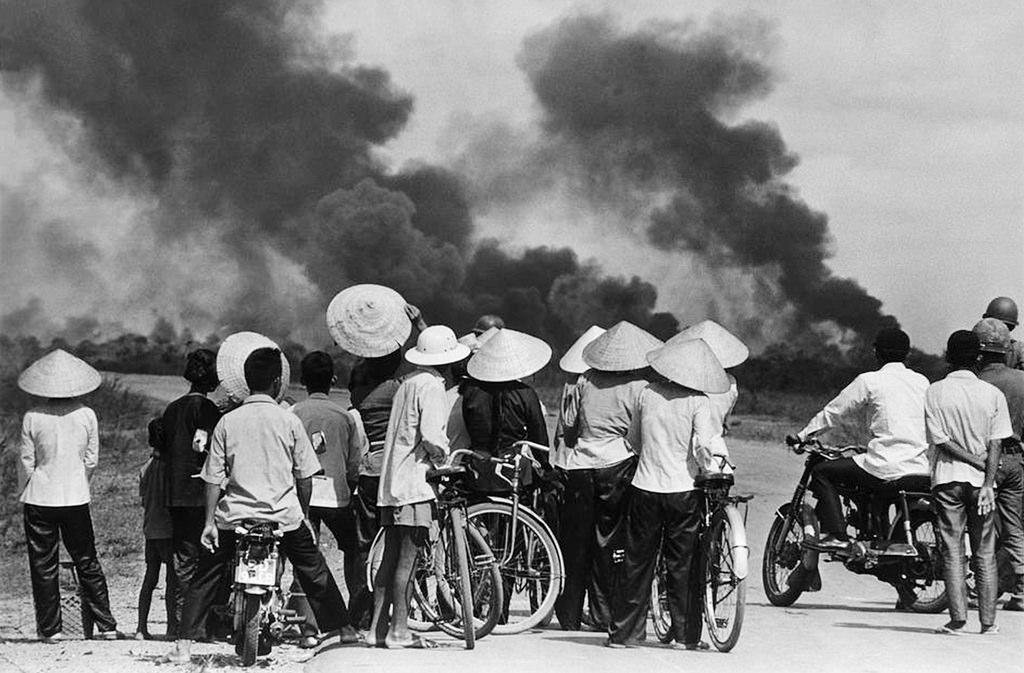 At one point in Viet Thanh Nguyen’s The Sympathizer, the narrator, recalling the fall of Saigon, falls to reflecting upon the American-christened name of the evacuation operation, Frequent Wind: “I had brooded on it for a year, wondering if I could sue the US government for malpractice, or at least a criminal failure of the literary imagination. Who was the military mastermind who squeezed out Frequent Wind from between his tightly clenched buttocks?” Coming as it does, soon after an almost physically painful description of battlefield casualties during the evacuation – “the fuel tanks… incinerated the three dozen occupants, their teeth exposed in a permanent, simian rictus; the flesh of their lips and faces burned off; the skin a finely charred obsidian, smooth and alien, all the hair converted to ash, no longer recognisable as my countrymen or as human beings” – the flippancy feels strained, almost jarring. And yet, that is the point. Catastrophe is made bearable only by an ability to pick out the tiny absurdities amidst widespread carnage. It is an attitude that marks both Nguyen’s unnamed protagonist, and the novel as a whole. The Sympathizer is the story of a North Vietnamese communist double-agent, who has successfully infiltrated the inner circle of a South Vietnamese general at the peak of the war. Beginning with the fall of Saigon, The Sympathizer follows its narrator’s flight and exile to the US, where he continues to remain the general’s confidante, while secretly communicating the state of the South Vietnamese diaspora to the communists back home. It follows his bumbling attempts to craft his own identity in an unfamiliar land, as he deals with love, loss and the heartbreak of exile  – “So it was that we soaped ourselves in sadness and we rinsed ourselves with hope…” – and the increasingly ghastly moral compromises that he makes to maintain his role as a double-agent and his final return to Vietnam as part of a doomed expeditionary force that he joins to save the life of his ‘blood brother’, a fiercely partisan South Vietnamese army-man.

At one level, The Sympathizer is a thrilling spy story, a novel about friendship, exile and personal compromise, and a study of moral and mental degradation under the crushing weight of a totalitarian regime. But it is also an unmistakably satirical and political indictment of a savage war that began in hubris and ended in tragedy. Nguyen understands that the sheer magnitude of the destruction cannot be effectively captured through bleak realism, but rather, through a style that disavows its own seriousness, that often pushes us to laughter, before making us remember the darkness that lies underneath. At one point, for instance, he writes:

“Aided (or was it invaded?) by Superman, our fecund little country no longer produced significant amounts of rice, rubber, and tin, cultivating instead an annual bumper crop of prostitutes, girls who had never so much as danced to a rock song before the pimps we called cowboys slapped pasties on their quivering country breasts and prodded them onto the catwalk of a Tu Do bar. Now am I daring to accuse American strategic planners of deliberately eradicating peasant villages in order to smoke out the girls who would have had little choice but to sexually service the same boys who had bombed, shelled, strafed, torched, pillaged, or merely forcibly evacuated said villages? I am merely noting that the creation of native prostitutes to service foreign privates is an inevitable outcome of a war of occupation, one of those nasty little side effects of defending freedom that all the wives, sisters, girlfriends, mothers, pastors, and politicians in Smallville, USA, pretend to ignore behind waxed and buffed walls of teeth as they welcome their soldiers home, ready to treat any unmentionable afflictions with the penicillin of American goodness.”

The almost oppressive lightness of the style effectively conceals the horror of the reality that it describes, but even in the concealment, creates a more lasting sense of disquiet than the urgency of direct description. Nguyen’s style here is reminiscent of two other great postcolonial novels published recently: Ngugi wa Thiongo’s Wizard of the Crow, set in a thinly fictionalised African dictatorship, scrambling for international funding to build a modern-day Tower of Babel; and Eka Kurniawan’s Beauty is a Wound, a magical-realist account of the Indonesian liberation struggle, and the subsequent massacre of its communists in 1965 and 1966. What unites these novels is the grisly enormity of their themes and the stylistic choice of responding to it in a wry, self-deprecating, almost off-hand way, refusing to take it seriously and thereby accentuating its seriousness.

In Nguyen’s case, this style is supplemented by the elegance of beautifully crafted sentences and an almost preternatural gift for the perfect metaphor. When he writes of the “the thousands, brave young men enmeshed in the cobwebbed eulogies spun by spidery politicians”, or the “the calcium and lime deposits of memory from the last days of the damned republic encrust[ing] themselves in the pipes of my brain”, or of the “soporific heaviness… scratchy as an army blanket, oppressive as unwanted love”, we know we are in the presence of a master-wordsmith, putting the tools of language to their most effective use. And it is in the midst of this – the wry tone and the finely-wrought sentences – that when Nguyen does switch to seriousness, its impact is all the more powerful because of its rarity. There is an incident in the novel where the protagonist signs up as a consultant for a Hollywood film being made about the Vietnam War (a barely-veiled reference to Apocalypse Now), in the hope of ensuring a modicum of representational justice to the Vietnamese. After an ill-fated shooting visit to the Philippines, he realises the futility of his attempts:

“I was no more than a garment worker who made sure the stitching was correct in an outfit designed, produced, and consumed by the wealthy white people of the world. They owned the means of production, and therefore the means of representation, and the best that we could ever hope for was to get a word in edgewise before our anonymous deaths… [but] if we are represented by others, might they not, one day, hose our deaths off memory’s laminated floor?”

This is where the satirical and indirect method is replaced by the pointed, almost brutally direct; although Nguyen never abandons his fidelity to language. In its place, it is as striking as an Edward Said essay.

Lastly, it should not be thought that The Sympathizer is a one-sided novel, focusing unduly upon the brutalities inflicted by the US, while excusing or ignoring the violence of the North Vietnamese regime. Like Ngugi wa Thiong’o once more, Nguyen is keenly aware of the asymmetries in the structures of global power, but he doesn’t allow that to blind him to how the roles of victim and executioner are often interchangeable – “Now that we are the powerful, we don’t need the French or the Americans to fuck us over. We can fuck ourselves just fine.”

A good portion of the novel takes place in a North Vietnamese concentration camp, descriptions of which match some of the darker moments of Danilo Kis’ A Tomb for Boris Davidovich or Arthur Koestler’s Darkness at Noon. And right from the first page of the book, we are alerted to the fact that the narrator is writing in the form of a confession, made to a mysterious “commandant”. This form was once attempted by Argentine writer Luisa Valenzuela, but her Page Zero had to ultimately be censored from the final edition before it could be published in Argentina. Nguyen, thankfully writing without such constraints, adopts the form and introduces a note of ambiguity into the narrative right from the beginning, forcing us to constantly revise our assumptions about the story, with every reference to the “commandant”.

The Sympathizer is an extraordinary novel. Nguyen won this year’s Pulitzer Prize for fiction. It is surely only the start of a long and stellar career.