In 'Political Tolerance in the Global South: Images of India, Pakistan and Uganda', Sten Widmalm has provided much-needed and rarely available data on how people view the political "other". 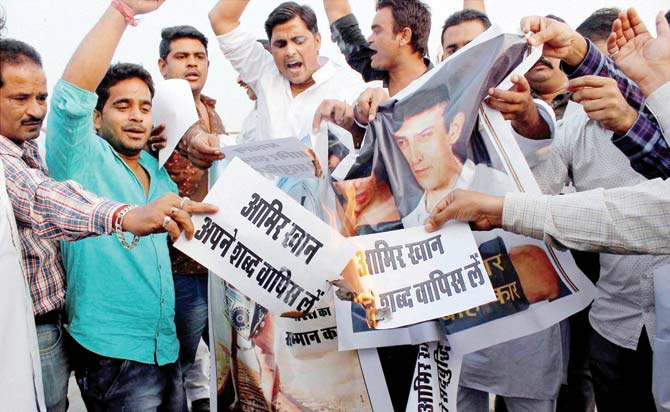 File photo of a right-wing protest in Jaipur against Aamir Khan's comments on 'rising intolerance' in India. Credit: PTI

Maybe no topic has dominated the headlines of Indian newspapers since the 2014 general elections than the topic of “tolerance”. Unfortunately, this is also a term that has been used vaguely, more as a form of abuse – the “intolerant sanghi” versus the “intolerant liberal” – than anything else, leaving it hard to understand what this means in actual practice.

It is therefore quite a delight to find a book – Sten Widmalm’s Political Tolerance in the Global South: Images of India, Pakistan and Uganda – that examines these issues with precise definitions, gives us data to work with and puts issues into a comparative perspective. I must confess that I did not even know that there was a field of study on political tolerance as established as Widmalm explains it is. For a number of political science students, this book will be worthwhile for this alone, for others of us, interested in the internal politics of Cold War US, the history of the Ford Foundation study of intolerance against Communists in the McCarthy era will be a revelation.

Based on a comprehensive set of survey questions for over 6,000 respondents, the final report, ‘Communism, Conformity, and Civil Liberty’, Widmalm says,

“was able to dismiss the idea that most Americans had been brainwashed by McCarthyism. Although leading political parties were indeed infringing civil liberties by playing on fear of communists, “few respondents had it at the top or even near the top of their worry lists”. The study did reveal, however, the great importance of a number of factors, such as education, urbanization, perceived threats and fears, age and generation, gender, and whether individuals had leading roles in their community, in determining tolerance at the individual level.” 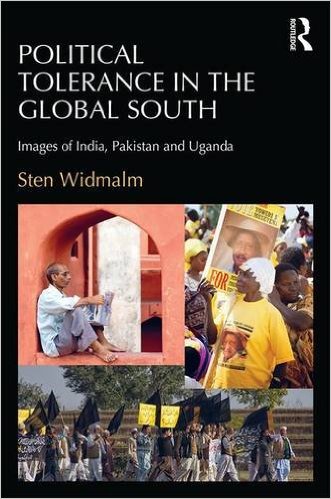 This chapter is so interesting, including the fact that Samuel Stouffer – who pioneered this angle of enquiry – has disappeared from public citation (Widmalm speculates that Stouffer was just not the fame-seeking type and did not engage in the self-advertisement necessary for such recognition), that I am tempted to quote the whole thing. This is “research” as in “searching again to find” in the truest sense and hugely rewarding.

Particularly rewarding is the focus on Stouffer’s principal questions to his respondents, asking if they dislike some groups and, if so, what (if any) rights are the people willing to grant the disliked groups. This, in a democracy, is the essence of political tolerance. If you give people that you dislike the rights to speech, to assemble and to run for political office, then you also run the risk of having them promote policies or implement political decisions that you disagree with. To be politically tolerant is to accept that you may be governed by people who belong to communities, or adhere to ideas, that you dislike.

It is precisely these questions that Widmalm and his team put to respondents in both urban and rural areas in India, Pakistan and Uganda. The choice to focus on these societies was for a multiplicity of reasons: there is a great deal of work on democracy and tolerance in richer societies, but little such work in societies where systems are poorer and weaker; these three countries share similar legal frameworks due the legacy of British colonialism; and they are democracies – though of very different levels of stability.

There is little space to describe the way that the choice of locales to study was made and the way that the questions were framed and respondents assured of anonymity in a review, so I will jump straight into the findings.

Based on the findings, it seems none of the societies are very politically tolerant. Urban India seems to fare best, although even here people are only willing to give just over a third of political rights to groups they dislike. What is the more interesting aspect is the differences between the rural and urban areas, as well as how differently these play out in the various countries. In India, urban areas are significantly more tolerant, whereas in Pakistan the rural areas are. In Uganda, the differences are marginal. Widmalm describes Indian, Pakistani and Ugandan polities respectively as “rivalrous”, “assaultive” and “subjugative”. He attributes the political (in)tolerance to a weak and underperforming public education system in India, military rule and the promotion of intolerant versions of Islam in urban Pakistan, and a one-party state system in Uganda that has blurred the lines between state and civil society, not allowing any space for dissenting views.

People will dispute these findings. I, for one, am disappointed at his clean division between Barelvi = good and Deoband = bad understanding of Pakistan. Surely the most political intolerant act in the recent past in the democratic arena of Pakistan (forget the militant controlled areas) was the assassination of Salman Taseer by his bodyguard? Taseer’s murderer was very much a Barelvi, although his horrific deed is “celebrated” by radicals across the sectarian divide. Not only did the assassination deny Taseer of speaking, acting and legislating freely, it was also aimed at shutting down dissent against the anti-blasphemy laws in Pakistan – which, by definition and practice, are precisely about the denial of political freedoms to groups (minorities) disliked by the Muslim-majority population.

A simpler reading of differences between the system is how political intolerance – the denial of rights to “others” generally by their elimination or subjugation – has been utilised in the various polities. In India, it has been used sporadically, through riots and pogroms as excellently documented by Stephen Wilkinson in his Votes and Violence. In Pakistan, it has been used strategically as “jihad”, whether in the 1971 war against its own people, the Afghan-Soviet war and in various misadventures against India and Afghanistan. The setbacks have left room open for liberals and democrats (sometimes not the same groups) to push back. In Uganda the one-party state has seen no setbacks.

This also explains the anti-minority content in education. Here Widmalm’s focus on the Barelvi/Deobandi divide ignores key research conducted by people like Matthew Nelson at the School of Oriental and Asian Studies, London who have shown that secular education in Pakistan is at least as bigoted as religious education in Pakistan. In India this bigotry is sporadic (I confess to being less familiar with Uganda). Bigotry in state education is better seen as an outcome of political choices than as the driver of them, but it can also be seeing as a self-reinforcing vicious circle.

However you interpret the findings of the experiment mapped out in the book, it is valuable thinking and rare data on a subject that is of extreme interest to anybody interested in the flourishing or diminishing of democratic values, especially in the global south. The academic language may be somewhat tough going, but it is definitely rewarding. Lastly, though, I was disappointed at finding this book priced at over Rs 7,000 on Amazon India. I hope the book becomes available to the general public at a much more affordable price, because the ideas and data in it are of grave importance to us all.