The octogenarian author, among others, pioneered modernism in Bengali poetry.

Kolkata: As a winter haze descended on the streets of a Kolkata still trying to come to terms with the passing of Soumitra Chatterjee, the news of poet Alokeranjan Dasgupta’s death came in on Tuesday, engulfing the city further in a sense of loss and melancholia.

The 1940s and 50s, when Alokeranjan began writing, were a difficult time for Bengali poets who did not know what to do with the colossus of Rabindranath Tagore. In his absence, he was more present than ever. For young poets, it was inevitable to imitate him, and it was impossible to imitate him. At such a time, Alokeranjan Dasgupta, along with his friends Shakti Chattopadhyay and Sankha Ghosh, gave Bengali poetry a new direction, carrying on the legacy of elder poets of the 30s and 40s like Jibanananda Das, Buddhadev Basu, Nirendranath Chakraborty, Birendra Chattopadhyay et al.

Together, they helped Bengali poetry come out of the towering influence of Rabindranath Tagore, not by defying him, but by acknowledging his monumental achievements. Besides, he contributed regularly to literary journals like Kabita, Shatabhisha and Krittibash, which shaped modernist Bengali poetry at its nascent stage. Thus, Alokeranjan, among others, pioneered modernism in Bengali poetry.

In the 108 poems in his first volume, Jauban Baul (The Bard of Youth, 1959), Alokeranjan seemed steeped in mystical tradition of Rabindranath, writing about love, solitude and nature with consummate skill, yet offering a new poetic idiom to register the anxieties of the post-World War II world. In his second volume, Nishiddha Kojagari, (Forbidden Full Moon, 1967) “he is somewhat restless and infinitely more urbanised in his general attitude towards life,” wrote poet Pranabendu Dasgupta.

Among his later volumes, Roktakto Jharokha (The Bloodied Balcony, 1969), Devi Ke Snaner Ghare Nogno Dekhe (Seeing the Goddess Bathing Naked, 1983) Moromi Korat (The Mystical Saw and Other Poems,1990), Se Ki Khuje Pelo Iswarkona? (Did He Find The God Particle?, 2012) cemented his place among the most important Bengali poets of the 20th century. The 1969 volume, his third, had a poem titled ‘Nirbasan’ (Exile) which illustrates how Alokeranjan could infuse the nostalgia for a lost home and a sense of longing in an otherwise uncomplicated landscape poem:

I look at villages and
I see my mother
As a child.

I look at hills in the villages and
I see my love
As a child.

Waterfalls spring from the heart of these hills
I look, and I see
Each home that was left behind.

The river stretches beyond the waterfall
Watched over by a wooden bridge, longing
I look, and I see
Noakhali,
the bridge that did not bear, and
the god that did not yield.

In more than 40 volumes of poems, the last of which was published in 2018, Alokeranjan relentlessly reinvented himself, and kept on experimenting with rhyme and metre.

This apart, Alokeranjan’s major contribution lay in the field of translations. In a career spanning five decades, he bridged the gap between Bengali and international poetry by translating numerous poets into Bengali, and Bengali and Santhali poets into German. Together with Sankha Ghosh, he published Sapta Sindhu Dawsh Diganta in 1962, a collection of world poetry in Bengali translation. At once, it broadened the horizon of Bengali literature, by introducing readers to poets like Goethe, Paul Verlaine, Jules Laforgue, Heinrich Heine, Théophile Gautier, Bertolt Brecht, Rainer Maria Rilke, Friedrich Hölderlin, Paul Valerie, Juan Ramón Jiménez, Giosuè Carducci and others, many of whom were still unheard of in this part of the world. Alokeranjan also translated Surdas into Bengali and German, and Coleridge into Bengali, the latter being one of his most notable works.

He was also a prolific writer of prose, in Bengali, English and German. His writings include literary criticism, travelogues, short essays for children and of course, prose translations. Goethe and Tagore, published in 1973, is possibly the most significant among his original prose works.

Alokeranjan received his first lessons in poetry and singing from his mother, who was a teacher of music. She also got him acquainted with the writing of Tagore. After studying in Shantiniketan and Presidency College, he completed his PhD from Calcutta University on the lyric in Indian poetry. He then taught at the star-studded comparative literature department at Jadavpur University, founded by Buddhadev Basu, where he met the likes of Sudhindranath Dutta, Nabaneeta Dev Sen and Manabendra Bandyopadhyay. In 1971, he went to Germany as a Humboldt Fellow. 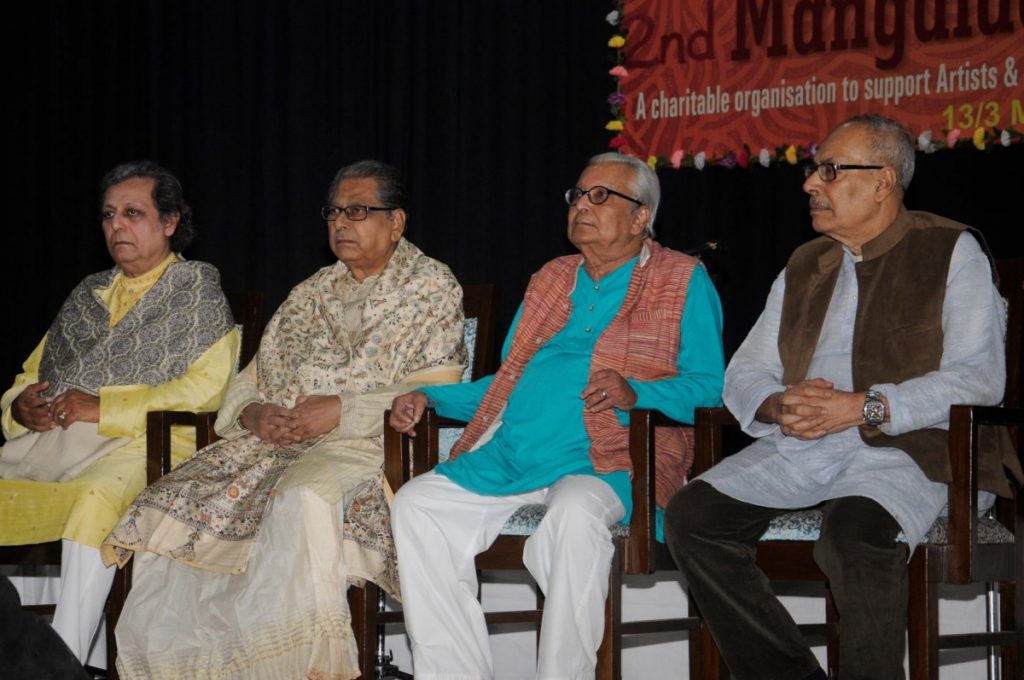 In a career spanning five decades, he bridged the gap between Bengali and international poetry by translating numerous poets into Bengali, and Bengali and Santhali poets into German. Photo: Special arrangement

From 1976, Alokeranjan taught Indology for close to four decades at the South Asia Institute at Heidelberg University. Throughout that period, he played a key figure in strengthening Indo-German relationship. In 1979, his Bengali translation of Sophocles’s Antigone was staged in Kolkata by Hangsgunter Heyme to all-round appreciation. Awards started coming his way soon. He received the Goethe Prize from Goethe Institute, Munich in 1985, the Ananda Puraskar, the Rabindra Puraskar and the Sahitya Akademi Award thereafter. Tales of his friendship with the maverick poet, Shakti Chattopadhyay, became part of literary folklore of this city. Together, they ruled the hearts of poetry enthusiasts in the city for decades.

Since 1971, Alokeranjan was a resident of Heidelberg, where he breathed his last on November 17, at the age of 87. His wife, Trudberta, had passed away in 2005. Though he lived far away, every winter he would make it a point to visit Kolkata, which was like a muse to him. At the Kolkata Book Fair and other literary meets, his would be a regular presence. People came in large numbers to hear him wherever he spoke, because of the range of his scholarship and the fact that even the most serious speeches would always be punctuated with his inimitable humour. Veteran scholar Amiya Deb once said they would eagerly look forward to his talks, as every time Alokeranjan spoke, he would coin some new Bengali words, almost unfailingly.

Why is the inheritance of Alokeranjan’s loss so unbearable on us? Because he was one of the last representatives of the Renaissance generation of Bengali intellectual. He was a citizen of the world, who celebrated Bengali literature in the West. He recounted in an interview how he read Jibanananda Das to a spellbound Jacques Derrida, translating the poems orally and explaining their context to him. On another occasion, he read the same poet to the philosopher, Hans-Georg Gadamer, who found Jibanananda quite similar to Rainer Maria Rilke in places.

In 1976, Indira Gandhi met Alokeranjan along with other artists and writers at the Raj Bhavana in Kolkata. Months before that, the government had put curbs on Tagore’s writings and recording of Tagore songs at the All India Radio. The poet not only objected to this, but he also told Indira on her face that she didn’t read Tagore well. When Indira insisted that new India will emerge banking on Tagore’s optimism, Alokeranjan, quoting Leslie Stephen, told her that she didnt know, but her father did, that ‘nothing is less poetical than optimism’. Whether we agree with that or not, Alokeranjan had the spine to be forthright in front of Mrs Gandhi, even when many of the direct disciples of Rabindranath could not gather the courage to lodge a protest against the censorship of the poet.

While pondering in a forest the names of possible ministers
for the shadow cabinet
the day slipped past, and all of a sudden
a frail deodar tree tottered towards me.

Its roots are rather loose, and to tell the truth
it has hardly a single leaf left;
We both enveloped in the joy of lacking power
postponed setting up our government.

Politically, Alokeranjan was decidedly left of centre. His poetry gave a voice to the voiceless, downtrodden class, particularly the refugees. As a young man, he shared the extreme Communist view that the political Independence that India earned in 1947 was insignificant. In an essay titled Nijeke Niye (About Myself, 1972), he candidly recounted his teenage days in Shantiniketan, when ‘party leaders’ inspired him to brush aside the jubilation over India’s recently earned Independence, and he roamed about the remote villages of Birbhum district of Bengal flying black flags and carrying the party manifesto to secret hideouts of leaders. This Alokeranjan may be unknown to many who have seen him as a sophisticated urban intellectual.

Author and academic Chinmoy Guha said Alokeranjan’s intelligence made him stand apart from his contemporaries and successors. “There was a rare unification of emotion and reason in his poetry. His poems were always cerebral. Secondly, the manner in which he spoke Bengali was exceptionally beautiful and his spoken language was always laced with spontaneous word-play and humour. I don’t think anyone has spoken the language more aesthetically than Alokeranjan in the last half a century.”

Poet Srijato recollects how Alokeranjan’s presence always revitalised meetings and seminars. Even in atmospheres hostile to serious literary discussion, he spoke with utmost sincerity and wisdom. During their last meeting in India, Srijato had asked the octogenarian poet, “How long will you be here?” Alokeranjan replied, “Who knows!”.

Poet and academic H.S. Shiva Prakash said, “His was poetry of irony, compassion and disillusionment. There was always Karuna rasa (sentiment of compassion) at the heart of his poetry. He was acutely aware of the questions of poverty and exploitation in a world boasting of progress and prosperity.”

Recollecting their days together in Heidelberg, the retired JNU professor wrote on Facebook, “I went to his house several times and enjoyed his warm hospitality, delicious wine and enlivening conversation… He would always punctuate his serious conversations with a good doze of scintillating humour… Like a father figure, Alok Da was always full of concern for me.”