Nandini Sen’s Book Is a Captivating Collection of 11 Tales, With an Element of Suspense

Sen has planted seeds of 11 novels in 'The Second Wife and Other Stories'. The stories are short and crisp, but it seems as if there is a perennial dialogue taking place among all the stories. In The Second Wife and Other Stories, Nandini Sen has delivered a wonderful collection of 11 tales. Each story in the book is like a novel in the making. In other words, Sen has planted seeds of 11 novels. The stories are short and crisp, but it seems as if there is a perennial dialogue taking place among all the stories.

The tales are similar to one another and at the same time quite dissimilar as well. All the stories have at least one strong woman as an important character, who defines her own destiny.

Initially, the female character is suppressed, mutilated, broken and tortured; but in the span of the story itself, she gains her voice and space. She registers her presence and takes her own decisions. Her liberation is not easy or without consequences. Sen’s strong woman is not only afraid to die, but she is also bold enough to run away in order to participate in the freedom struggle. She dares to go to a police station and breaks years of silence, but she acts. She comes out of her comfort zone and accepts the challenge. 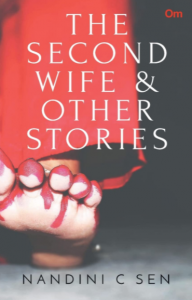 The Second Wife & Other Stories by Nandini C. Sen.

Once awaken either by providence or by sheer will, she does not look back. One finds her rehearsing for her part in the play against her husband’s wish, remaining underground for the nation and surrendering when the situation demands; saving the king and ensuring that her sons get the required experience of life; taking exams and shining afterwards despite physical and sexual violence; with strength and conviction adopting her husband’s children from the other wife; becoming a lawyer, a journalist, a doctor, a caretaker, an activist, a warrior, a leader, you count it and you will find Sen’s heroines fulfilling each part with dignity and confidence.

While reading these stories, one encounters Kolkata coming back to life. It seems one is roaming sometimes in the crowded cities of Kolkata and other times ambling across the lush green rural landscapes. Kolkata, in these tales, is not just a setting or a place, but a living character. When you are not in Kolkata, you are taken to Delhi.

One encounters the national capital with its offices, universities, streets, parks, clubs and people. Occasionally, Sen takes you back in ancient India as well, with its lush green forests, high-peaked mountains, with ascetics, kings, queens, palaces, princes and supernatural ambience. The range and canvas of these stories is grand and magnificent.

However, Sen has not limited herself to topical themes and local characters. Her themes are ubiquitous and her men and women are universal. You are likely to encounter them while boarding a train or a bus, enjoying tea with friends in the park, watching a movie in cinema, ordering your favourite food in your favourite restaurant and shopping in an overcrowded market.

Her tales are inundated with people who are easily identifiable. They are just like all of us. They love passionately, they hate vigorously, they celebrate when the situation demands, they weep when the situation goes out of control, they fight when there is no other alternative available and they die in the end because everyone in the end has to.

Also read: Book Review: In Pankaj Mishra’s ‘Run and Hide’, an Imbalanced Look at Worlds Within and Without

Sen’s subjects are as diverse as her men and women. In one of the stories, she deals with love and in another tale she presents patriotism. In one story she conceptualises kingship and responsibility, whereas in another story, she paints motherhood. On one side, she concretises aspirations, ambitions and desires and on the other hand, she plays with loyalty, fidelity and betrayal.

Like her themes and characters, Sen’s language in the short stories is sweet and elegant. She uses simple yet powerful expressions. She does not waste words, her signifiers are exact and accurate. She does not trouble her readers with highly ornate diction. Her sentences are short and crisp like her stories. She presents a beautiful cocktail of Hindi, English and Bangla. The glossary given at the end is indeed a great help for the readers from abroad.

It is nowadays believed that girls, in almost all contexts, have been told the wrong kind of stories. In the conventional tales, the girls are presented as secondary and powerless. They are represented as docile, domesticated, seductive, soft, obedient, caring and sacrificing. As a result, these characteristics are imprinted on the minds of the readers. In this way, these values become real and most desirable for the girls.

Sen in these eleven stories has subverted this defining paradigm. Her women are not objects or codified property. Her women are not just bodies ready for any kind of service. Her women are new women, rather speaking women. Her women shout if others do not listen, her women scream, if the situation demands, her women assert if there is no other option, her women become aggressive if there is a need, her women even resort to violence if anyone tries to obliterate their identity and existence. These are the right kind of stories that perpetuate the right kind of values. These stories are likely to inspire hope, positivity and confidence in the readers, particularly the women readers.

As Foster once remarked that a good story is that which can evoke curiosity without revealing much and force the readers to read on without any break, in which readers keep on asking what next? It seems that Sen has taken this advise seriously and religiously. These stories are engrossing and captivating.

One cannot close the book without finishing the complete story. I myself finished the entire book in one sitting. There is hardly any space for breathing while reading. There is an element of suspense and surprise throughout. When you want to read more, the story gets over. When you start predicting, something totally otherwise happens. Sometimes there is a happy ending and sometimes the ending is tragic. You do not realise when you are weeping with the characters or participating in their joy.

In short, this is a wonderful collection and highly recommended for everyone. I am sure whosoever picks up The Second Wife and Other Stories will have a beautiful and fantastic reading experience.