The Mystique of MGR – A Legend Who Lives On

R. Kannan's biography of MGR offers an objective insightful portrait of a matinee-idol turned politician who had monopolised the story of Tamil Nadu. 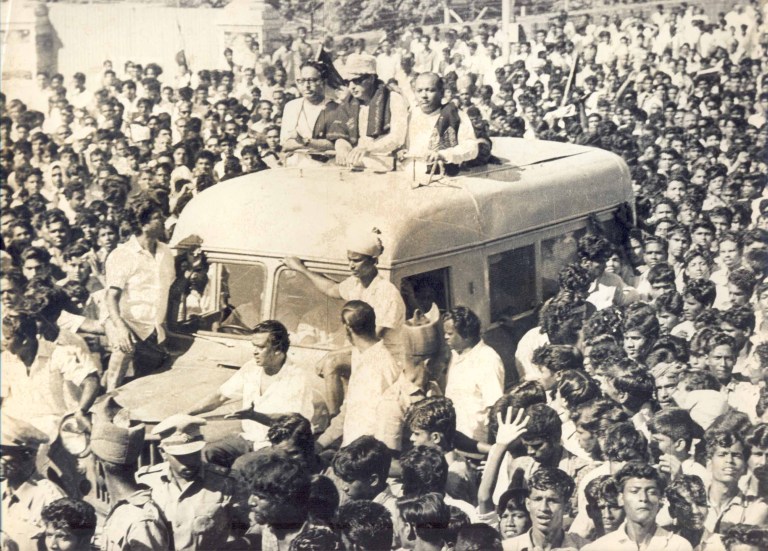 Note: This article was originally published on July 9, 2017 and is being republished on Janaury 17, 2019 on MGR’s birth anniversary.

The title of the book MGR: A Life is deceptively simple for a narrative that tries to unravel the complexities of a man who was a legend during his lifetime. It was a life extraordinaire bordering on the mystique. M.G. Ramachandran, popularly known as MGR, the matinee idol, a Malayalee-born in Sri Lanka, who became Tamil Nadu’s most popular mass leader, rode like a colossus during the turbulent transitional socio-political period of the state for more than three decades as an actor supreme and as a political leader invincible, till his death in 1987.

It is not easy to write about a life as complex as his and to capture its nuances. Actors and politicians customarily wear a mask in public. And he was both. Only those who live with them have the privilege of seeing their true faces, of getting under the skin and observing the changing colours and of assessing the strengths and weaknesses that are hidden beneath.

Yet, R. Kannan, whose family was closely associated with the Dravidian movement and the Dravida Munnetra Kazhagam (DMK), and who knew many bright names belonging to it personally, ventured to take up the challenge of writing the biography of MGR, a rebel, who moved away from his parent organisation, the DMK, to form his own – the Anna Dravida Munnetra Kazhagam – and became a serious, bitter rival of Karunanidhi, the leader of the DMK – whom Kannan prefers to address throughout the book by his title: Kalaignar (the artist).

But the biographer, following the true tradition of the genre, “who has not allowed this association to come in the way of the book” writes with critical empathy and understanding the compelling story of a man who was a leader of the masses but remained an enigma even to his close aids. A leader who seemed more comfortable in a make-believe world, donning his make-up, destroying enemies on the screen and rescuing damsels in distress, than facing the rivalry and bitter squabbles in the political arena as the chief minister of Tamil Nadu. A life, where the reel and the real often blurred and led one to delusions. The moral degradation of an icon who was too vain to admit he was ill, too self-consumed to name his successor. Kannan weaves a tale of all this and more with an astonishing clarity, having researched meticulously the events that shaped the destiny of Tamil Nadu, events that also tell the remarkable story of Karunanidhi, Kalaignar, the consummate artist, orator, leader, par excellence. 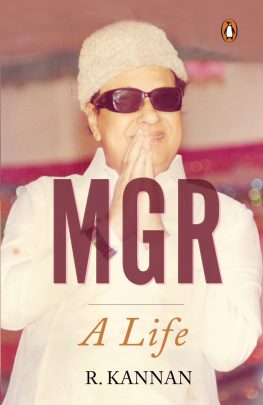 Quoting from the book: “MGR’s success ought to be an inspiration for today’s young and for the young to come. The early death of his father, abject poverty, lack of formal education, living in an adopted state, his belated opportunity as hero – MGR allowed nothing to stand between him and success.”

“He was only the second actor-turned-politician after Ronald Reagan who managed to take centre stage. Few could read the masses as he did. Not surprisingly, none before or after has been deified like MGR.”

That puts, in a nutshell, MGR’s success story.

The phenomenal rise and success of MGR as an actor and later as a politician and the emotions that his name continues to evoke among the common people in the state even 30 years after his death, is something of an enigma.

How much of this MGR mystique was engineered? How meticulous was the strategy drawn to win over the masses? How much political thinking was behind the myth? Despite amassing great wealth and becoming the most powerful man in the state for a long spell, his identification and empathy with the poor was legendary.

M.S.S. Pandian’s critical essay on MGR, The Image Trap makes a serious attempt to explain MGR’s extraordinary popularity and support among the poor. MGR carefully created a screen image that corresponded to ‘the cultural presuppositions’ of the subaltern classes in Tamil Nadu, as they are manifested in the folk-hero ballads. “The typical MGR hero is a low-status underdog, who acquires the power to dispense justice, uses education or literacy as a tool to struggle and defends women’s honour.” It held a tremendous appeal to the poor and most importantly, women. When MGR acted the part of an action hero (he preferred the role as he was aware that he was not good at facial expressions) it became imperative for the narrative to make him a hero who would protect/save the heroin/women in distress. He decided that he would not play a villain’s role at all if he had to contest in elections.

The importance of MGR’s association and identification with the DMK can hardly be underestimated. The reason for his tremendous success cannot, as the book clearly brings out, be attributed to his star status and his convincing portrayals of the invincible good guy alone. Several film stars have tried their luck in politics, Shivaji Ganesan, for instance, who was a greater actor and as popular, but none have been even remotely as successful as MGR was. 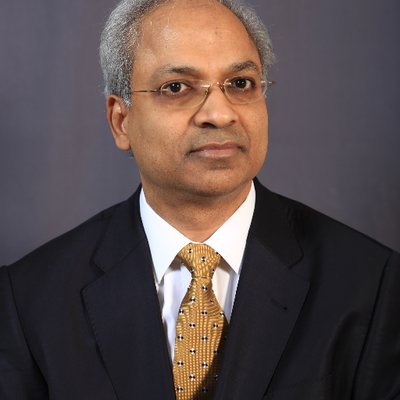 But even in films, success did not come easily and Kannan gives numerous incidents to illustrate MGR’s struggle before he became a hero and the jealousies and quarrels that his popularity generated among fellow artists who could also be manipulated by political parties ending in a near fatal gun shot. The narrative is as gripping as a film script.

It is clear that the mystique of MGR rested on the fact that his film and political careers were closely intertwined in a remarkably symbiotic manner that gave him an unbeatable image. His involvement with the DMK started in 1953. The fact that he was so closely identified with the DMK, and the DMK with him, was important in its impact. When people watched him on the screen, the party’s message became MGR’s message.

Kannan’s portrayal of MGR is balanced in its praise and criticism – not indulging in hyperbole or icon bashing.

“MGR was socially conscious and politically committed as none other”, writes Kannan. “MGR changed Tamil Nadu’s politics into a contest between the two Dravidian forces, instead of the Dravidian movement versus a nationalist movement.” The Congress has not been able to come back to power in the state since its defeat in 1967. MGR became the darling of the masses with his open generosity that was genuine when it came to helping friends and foes in distress – which was also much publicised – his far-reaching schemes providing nutritious noon meal in schools, free tooth powder, uniforms and footwear to school going kids; his administration made education up to the plus two stage free. There was a rise in school attendance and a reduction in the number of dropouts and he gave employment to two lakh women. The vision to partner the private sector in education would transform the state forever. 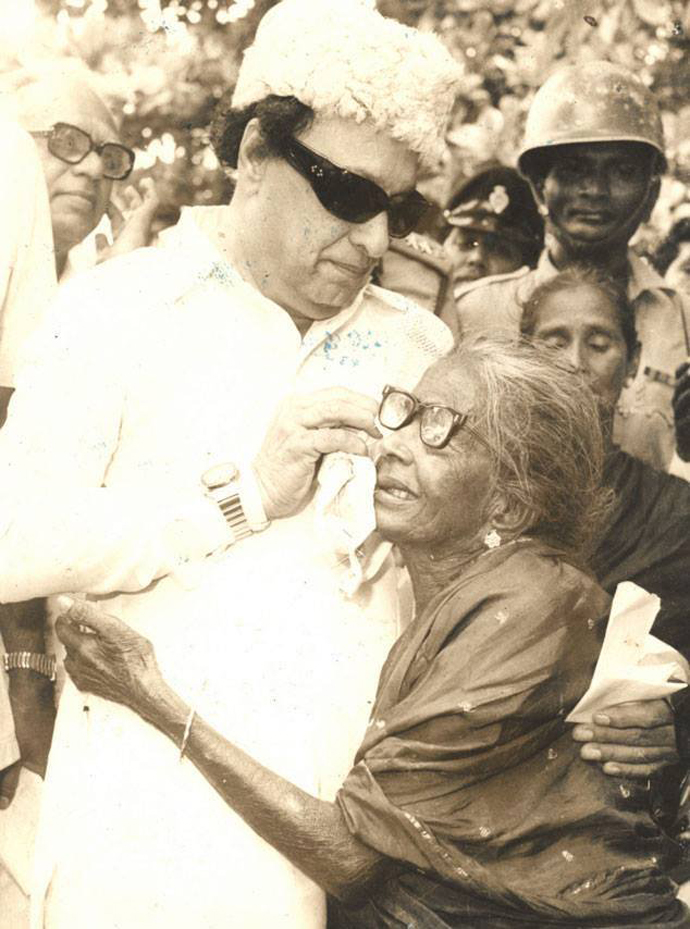 MGR became the darling of the masses with his open generosity. Credit: Twitter

But MGR’s regime was also notorious for its intolerance of dissent. He trusted no one; kept his cabinet colleagues, opposition leaders under surveillance. His administration was opaque and highly centralised; no files moved when he was ill and governance came to a standstill. He could have done more, says Kannan, with his popularity but “his administration could boast of no major development projects, industrialisation or modernisation of agriculture or tourism”

The book makes a riveting read when it narrates the relationship between MGR and Karunanidhi, who were close pals turned rivals. The warmth and affection that turn sour and the inevitable split that saw Karunanidhi slip into a political limbo for more than a decade is narrated with a deep understanding of the characters in action.

Karunanidhi, in fact, emerges as a man of courage and integrity, especially during his protests against the Emergency whereas MGR looks a confused man and opportunistic. There are many passages that reveal that Karunanidhi was an indefatigable fighter when not in power, smarter, bolder and shrewder in his political assessments than MGR. His opposition to the Centre’s stance on Katchatheevu, on Sri Lanka and his moving obituary when MGR dies, are examples as cited by the author. But the author’s insistence on referring to Karunanidhi as Kalaignar may confuse the non-Tamil reader. 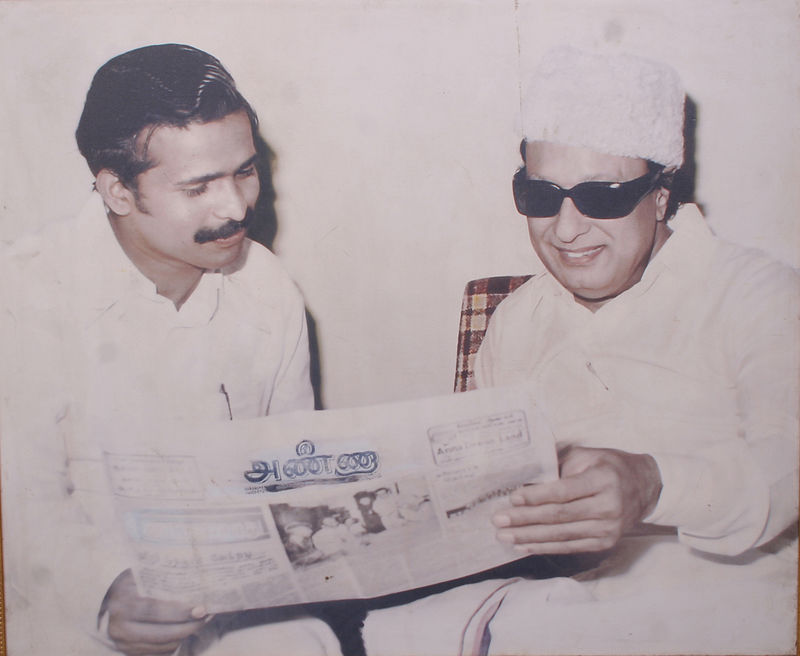 Kannan does not spend much time on the emotional trap that MGR got into when he became obsessed with Jayalalithaa, nearly 30 years younger to him when they were paired in films, a fondness that continued almost till his end – something he could not openly express for political reasons. Kannan points out her ambitious nature, and impatience to grab power to the point of defying her mentor, that led MGR to express regret in the open, for having given her undue importance in the party. Kannan makes intrusions in the narrative to give his opinion, which are not, of course, complimentary to her.

The biography – rich in detail and rare anecdotes – offers an objective insightful portrait of a matinee-idol turned politician who had monopolised the story of Tamil Nadu for long. It is also a historical document of a political world that is both fascinating and perplexing.

Vaasanthi is the author of Amma: Jayalalithaa’s Journey From Movie Star To Political Queen.