Interviews from field work usually end up being sifted to help build up the researcher's argument. 'Mobile Girls Koottam' proves that needn't always be the case. 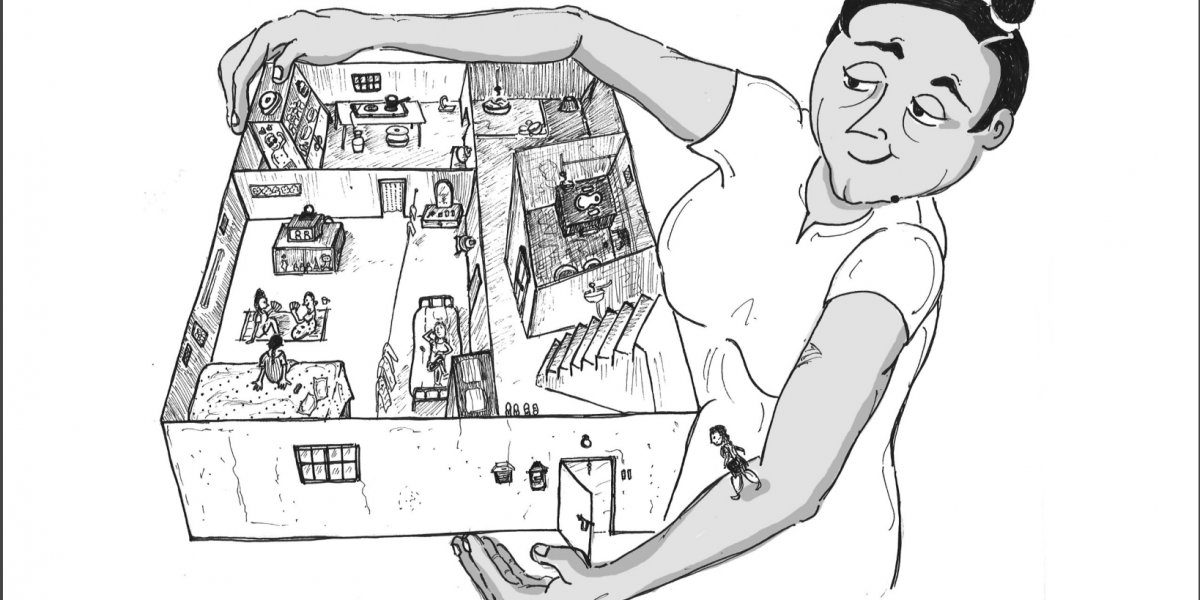 In the language of economics and business management, workers are mere factors of production or reduced to numbers and labour capacity. In the language of activism and research, it is often their exploitation that is in focus. In such writings, even when first person accounts by workers are used, they often play an illustrative role to emphasise a particular issue (of course there are the rare exceptions).

Mobile Girls Kootum is refreshingly different. In this collection of conversations put together by Madhumita Dutta, a group of women workers from a factory producing mobile phones come alive as flesh and blood people with desires, disappointments, joys and sorrows, anger and amusement, which they express in their own voices. Madhushree’s illustrations enliven the whole experience of listening to these conversations and by the end of the book you feel you have gotten to know each of them as a person. 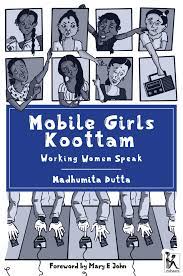 These free-flowing conversations emerged out of the field work that Dutta did for her doctoral research, and took the shape of a radio podcast they decided to put together. The women discuss a wide range of issues: their experiences of growing up as girls in a patriarchal society, menstruation, relationships, marriage, lack of public spaces for women, the everyday experiences of work in the factory, their strategies of coping, what work means to them, apprehensions about losing their jobs and their dreams about the future.

One is especially struck by the enthusiasm with which the women want to share their experience. While in the beginning some of them had apprehensions about opening up their conversations to a larger public through a podcast, by the end, when they are all saying their goodbyes, it is clear that they themselves have found these conversations enriching and are convinced others should listen to them. One can imagine numerous ways in which these conversations can be a starting point for more conversations and discussions.

Creating and navigating spaces (and the lack of such spaces to begin with) is something that runs like a thread through the book. Muthu’s room, where these conversations happen, is itself such a space. And again, Madhushree’s illustrations help us imagine this space and the different women occupying this space – often in their nighties, sprawled on the floor, temporarily out of reach of the different disciplining forces in their lives (employer, parent, community, neighbour). The very first conversation begins with this desire for safe, shared spaces – the women dream about setting up a tea shop, where women could gather freely and chat.

Another, related theme that is woven into these conversations is that of mobility. The title of the book (and podcast) plays on this. As Dutta explains, these women are not just workers who produce mobile phones but mobility, and its circumscription, play an important role in shaping their experiences and identities. On the one hand is the freedom they gain by moving away from their homes and village, living on their own and having an independent income. On the other, are the various disciplining forces they have to face and navigate – the employer and supervisor, the home and the neighbourhood, and even the self. Research often has a tendency to compartmentalise, though of course in recent years there have been conscious efforts to break this. So, work and workers are associated with workplace; and it is from experiences in this space that workers are expected to develop a working class consciousness. When this does not happen in expected ways, explanations are sought in the skewed form of industrialisation in the third world, incomplete proletarianisation or the stranglehold of pre-modern traditions.

E.P. Thompson was one of the first historians to point out that making sense of working class consciousness and solidarity required one to move into the broader realm of politics and culture as manifested in the lives of workers. In Indian labour history, Rajnarayan Chandavarkar, among others, has drawn our attention to the importance of the neighbourhood and life outside the factory in shaping workers ideas and actions. New scholarship has also underlined the role played by caste and patriarchy in shaping the world of work.

The conversations in this book indicate what one might lose by such compartmentalisation or attempts to homogenise experiences. Satya’s experience of growing up in a household without brothers, the caste location of each of them, Kalpana’s encounter with the ideas of Periyar and Ambedkar when she was just out of school are as important in shaping their identities, ideas and actions, as their experiences on the shopfloor. So, it is not surprising that Lakshmi, Kalpana, Satya and Abhinaya have different takes on what is work, whether housework is work, and how they feel about housework or what they see themselves doing in the future. As usual Madhushree’s illustrations capture this beautifully. I particularly like the one where Lakshmi is imagining herself as an ideal housewife, as Kalpana rolls her eyes and Abhinaya prods her on with a cheeky smile.

Historians struggle to retrieve the voices of labour from the archive. Often, the working lives of people have to be deduced from indirect evidence. Mathematical calculations on how long it takes for a particular length of yarn to be spun or cloth to be woven might give us a peek into the work done by spinners or weavers. Or legal depositions may be read against the grain Therefore, for a historian like me, a collection of conversations like this is something to be envious of. And there is an urgent need to consciously create more such records.

Even for social scientists working on the present, this experiment opens up new ways of engaging with one’s subject and is an invitation to reflect on practices of fieldwork. Interviews from field work usually end up being sifted to help build up the researcher’s argument. Is it possible for the contributions by the participants in the research to take a life of its own? Are there more collaborative ways of knowledge creation? What do those who are being researched get from the process? How does one navigate the power hierarchies between the researcher and the researched in such collaborative exercises? The book does not answer all these questions but is an invitation to think through them and come up with new ideas and practices.

Karuna Dietrich Wielenga is a historian. She teaches at the Azim Premji University and is Research Associate, Oxford School of Global and Area Studies, Oxford University.