Renowned Pakistani fiction writer Khalida Hussain, the author of 'Kaghazi Ghat', passed away last week in Islamabad, leaving behind a dazzling body of work which will stand the test of time.

“Somebody speaks inside me day and night: Now it’s your turn…now you will see.”

These lines come at the climax of Sawari (Ride), the representative short story of Khalida Hussain, the Pakistani Urdu writer and novelist who passed away on January 11 in Islamabad at the age of 81.

These lines are hard to forget.

Khalida is among a small handful of writers whose works are a distinctive capital of the Urdu short story. The details of Khalida’s career as an author of short stories, in fact, read like a short story itself, with a quaint and unique style she very much made her own.

Khalida entered the field of writing short stories gradually and cautiously, but galloped ahead quickly. Traces of her individuality are very visible in stories like Sawari, which were written in the early years. These stories, which are even today regarded as among the memorable short stories of our time, displayed her artistic control, narrative power, expertise of technique and extraordinary ability to create allusion and innuendo.

The twist to the tale came when the writer of these unusual stories disappeared from the literary horizon. The silence spanned years, but eventually Khalida picked up the pen again and re-established her literary journey. She began to cover new destinations and made it clear that her journey of self-awareness had continued during the years she didn’t write.

Once the spell of silence was broken, she wrote constantly and continuously until her death, cementing her position among the eminent Urdu writers of today.

Khalida Asghar was born in Lahore on July 18, 1937. Her father, Dr A.G. Asghar, was the vice-chancellor of the Engineering University of Lahore. Despite being associated with the field of science, he was especially interested in literature and made sure his children also developed a keen interest. Like her siblings, Khalida attained higher education. She did her BA from the Lahore College for Women and obtained an MA degree from Oriental College, Lahore.

Khalida’s literary journey began during her student days. Her first short story Naghmon ki Tanaaben Toot Gayeen (The Ropes of the Songs are Broken) was published in 1956 in a Lahore-based journal called Qindeel. Then her story Dil Darya (The Heart Is a River), and following that, Munni, were published in Adab-e-Latif.

When Munni was published, renowned poet Nasir Kazmi commented, “This short story is the katha of lone souls.”

In those days, Intizar Hussain used to be the editor of Adab-e-Latif. He wrote about the beginning of Khalida’s literary journey: “So this short-story writer has begun alongside the end of 1966. That was the time when the Urdu short story had just changed sides and a new style had begun to be nourished.”

It was during this time that Khalida wrote Sawari. Soon, a new turn arrived in her literary life, when she got married to Iqbal Hussain in 1965 and adopted the name Khalida Iqbal – and subsequently Khalida Hussain. For the next 12-13 years, no short story flowed from her pen – soon after getting married, she shifted to Karachi with her husband and children and began to teach at PAF Shaheen College.

In 1979, she picked up the pen again. The first volume of short stories by Khalida Hussain, Pehchaan (Identity), was published in 1981 and the second volume Darvaaza (Door) in January 1984, both from Karachi. The foreword to Darvaaza was written by renowned educationist and psychologist Dr Muhammad Ajmal.

In a brief note at the beginning of this volume titled Aiteraaf (Confession), she wrote about her creative process:

‘When I want to feel myself, I write. The process of writing a story is an attempt to maintain the relationship of my own existence with both these worlds which flow within and without me, and so continuously that both mingle into each other; then when I feel my existence to be in danger, I am compelled to write. Maybe the fear of annihilation, the longing for eternity, the love of life force me to write.’

Whatever the dynamic, Khalida Hussain’s literary journey continued till the very end. Her collections Masroof Aurat (Busy Woman), then Hen Khuvaab men Hunuz (We, Yet Exist in Dreams), Men Yahan Hoon (I Am Here) and Jeene ki Pabandi (Limits on Living) were published in 1989, 1995, 2005 and 2018 respectively. 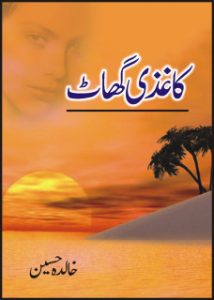 Her novel Kaghazi Ghaat (Paper Wharf), widely regarded as her magnum opus, was published in 2006 from Lahore. With this novel, Khalida Hussain’s art emerged anew. For, while reading the novel, one is immediately reminded of the characters and environment of her short stories. As a reader, one has long suspected that, barring the names, all the characters and events are real and factual. But Mona, the novel’s central character who is a school and then college-going, sensitive and plain girl, is definitely Khalida Hussain.

In Kaghazi Ghaat, all matters, contradictions, failures, rise and fall, and the problems confronting the nation are discussed. The novel also beautifully sketches the changing feudal culture of Lahore, depicting the waning powers of upper class families who had once been part of every fibre of the city in a world where a new middle class was taking root. Even the title of the novel is beautiful and thought provoking.

In addition to short stories and the one novel, Khalida wrote critical essays and stories for children. Her critical essays are especially noticeable for their deep attachment to literature and the insight created by a consciousness of life.

Khalida Hussain retired after a lifetime of teaching and had been living in Islamabad until she passed away.

In 2008, Khalida’s five collections of short stories and novel were collected in one volume under the title Majmua and published from Lahore. More so, her short stories have been published in various literary journals.

Towards the end of her story Zavaal Pasand Aurat (Banishment-Loving Woman), the female narrator’s train of thought is interrupted by a knock on the door. It’s a government messenger armed with an arrest warrant; the city ‘theolawgian’ (my own portmanteau corruption of the theologian and the lawyer) had prepared a chargesheet: “To a banishment-loving woman who even during this national crisis thinks about a ‘fly’.”

The late Khalida Hussain might have heartily agreed with this description of herself as the ‘banishment-loving woman’ of Pakistani literature, a supposedly apolitical author despite the multiple political allusions found in her work for those who care to look deeper; and who has left behind a dazzling but compact body of work which will stand the test of time for its uniqueness.

Raza Naeem is a Pakistani social scientist, book critic and award-winning translator and dramatic reader currently based in Lahore. He is also the President of the Progressive Writers Association in Lahore. He can be reached at razanaeem@hotmail.com.