Karl Marx: Flawed, Manic, and One of Us

A new book brings to life Marx's formative years in London, filtered through the prism of magical realism. 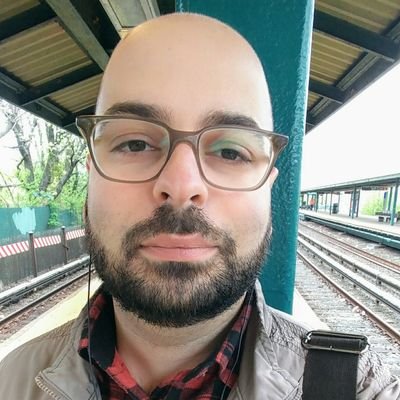 “Do you not exist? Do you feel like a machine? Does your life count for a mere commodity and nothing else besides? There in a nutshell, gentlemen, is what my ‘philosophy’ amounts to. And this is what we must all struggle against.”

When Karl Marx arrived in London in 1849, together with his wife Jenny and their three children, he was a thirty-one-year-old refugee. Already exiled from Paris, Brussels, and Cologne, Marx was a largely obscure figure. The Marx family planned for their stay in London to be brief, expecting that the revolutionary wave sweeping the European continent would go on. Instead, the revolutions were suppressed and England became Marx’s homeland for the rest of his life.

The Marxs’ move to London placed them in the financial capital of the world, and close to Manchester, its industrial capital. Marx thus ended up living out his remaining years at the very heart of the system that he spent his life struggling to theorise and overthrow. For better or worse, the understanding of capitalism captured in his mature thought was entwined with the history and culture of his adopted land, so that it would not be unreasonable to call Capital a thoroughly English work, in its subject matter, sources, and the tradition of political economy it deeply engaged with, if not in original language. 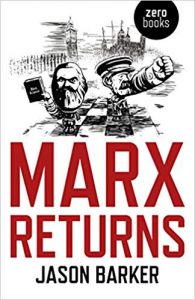 Jason Barker’s Marx Returns vividly reimagines Marx’s London years, dwelling primarily on the personal, political, and financial turmoil experienced by the Marx family during the 1850s, what was surely their most difficult decade. Although Barker draws on events from Marx’s life, the book is decidedly not a biography, which would have placed it in a suddenly crowded field, alongside recent contributions by Mary Gabriel (Love and Capital, 2011), Jonathan Sperber (Karl Marx: A Nineteenth Century Life, 2013), Gareth Stedman-Jones (Karl Marx: Greatness and Illusion, 2016), and Sven-Eric Liedman (Karl Marx: A World to Win, 2018).

Instead, as Barker makes clear, Marx Returns is a work of historical fiction. The book creatively weaves together real historical events; imaginative flights of fancy from Marx’s point of view, meditating on the nature of capital, mathematics, and ontology; and an uptempo narrative that is at heart a familial drama about the experience of exile in the nineteenth century. Together, these elements combine to create a whimsical book that tries to put a new spin on Marx’s life for those already familiar with it, while at the same time acting as a general introduction to its subject matter for those uninitiated, with mixed results.

Marx Returns arrives at what is now the post-1989 peak of the revival of interest in Marx and communism, which began roughly ten years ago, in the wake of the financial crisis (Barker himself is the writer, director, and co-producer of the 2011 documentary Marx Reloaded). Despite this, Barker does not assume any prior knowledge of Marx’s biography or writings from the reader; sparse endnotes explain the references to Hegel, Bakunin, and the Paris Commune. As such, we can easily imagine someone coming to Marx Returns after first seeing Raoul Peck’s recent The Young Karl Marx, especially since the two works almost seamlessly align in their chronology (and I confess to visualizing that film’s lead actors when reading this book).

But whereas The Young Karl Marx is a work that aspires to realism, Marx Returns is entirely defined by the wildly subjective mental state of Karl and, to a far lesser extent, Jenny. All the characters, from the central to the peripheral, are larger than life, fictionalized versions of the historical personages, and their exaggerated personalities naturally lend themselves to many humorous scenes.

Engels figures prominently as a dapper and somewhat absent-minded but loyal friend. Bakunin makes a couple of notable appearances, none more memorable than when he tries to recruit Marx into his plot to lead an army of twenty Ukrainian peasants on a campaign to liberate the Russian Empire. And Lenchen, the Marxs’ headstrong and cynical housemaid, and in many ways the most grounded member of the household, perpetually berates Karl for his inability to provide for the family.

Yet these characters remain largely secondary to the battle inside Marx’s own head, which takes centre stage in the narrative. Barker’s Marx is himself something of a mad scientist. More obsessed with calculus than with either political economy or history, he is perpetually manic, furiously scrawling sentences and paragraphs almost immediately indecipherable to himself, pawning off the family’s furniture, the children’s toys, and eventually, the literal shirt off his back.

What he is struggling to bring into the world, as he tells another character, is “a systematic work that penetrates to the very core of the bourgeois society, that grasps the real movement, the development of the social forces and relations of production as a finite mode in the universal scheme of things.” This work eventually materialises in the form of the first volume of Capital, but, as the novel suggests, at considerable expense to Marx’s sanity, personal relationships, and political goals — especially once it becomes clear that his fellow comrades in exile have little patience for the science behind Marx’s project.

Not surprisingly, London prominently figures as a backdrop to the story, as a living, breathing city that is teeming with the groans of the paupers, shopkeepers, landlords, and workers that Marx encounters daily. Most remain nameless, mere shadows for Marx’s perpetually agitated mental state to play off against. Capital repeatedly appears in the metaphor of an omnipresent, accelerating train, an agent of creative destruction that seeks to dominate nature and revolutionise the entire social fabric, from politics to the family to love. Yet it also brings its Other, at least in Marx’s imagination. In one such vision, the slums of Lambeth and the East End give life to the “wild and dysfunctional breed of living-dead labour that refused to stop working, the rebel power with nothing else in mind other than the fabrication of the tools for the takeover of society.” Naturally, this proletarian Leviathan, created by capital but now beyond its control, marches forward to set fire to Westminster Palace.

Barker peppers some of Marx’s most famous quotes throughout the text, anachronistically and in new contexts. “All that is solid melts into air” comes after seeing a rumbling steam engine in London’s downtrodden, primordial Lambeth Marsh. The idyllic vision of hunting in the morning, fishing in the afternoon, and playing chess as one pleases is now uttered by Jenny.

Occasionally, this playful drifting from the historical record, while meant to give a new urgency to Marx’s ideas, comes off as heavy handed, as when “religion is the opium of the people” is uttered by a priest. Nevertheless, it contributes to the story’s dreamlike character, an overwhelming magical realist haze in which its characters are perpetually straining to make sense of the rapidly changing world around them and to communicate their inner world to others. More often than not, they fail, giving a meandering quality to the story that tends toward impressionistic sketches rather than a clear narrative arc.

To its credit, rather than valorizing its hero, Marx Returns presents its protagonist as a deeply flawed character. Barker’s Marx is neck deep in debt, always mentally exhausted, impatient with his comrades, unfaithful to his wife, often neglectful of his children, and perpetually tormented by his boils. Barker also hints at the uneasy relationship between the demands of the revolutionary horizon and the uncompensated domestic labor that is borne by Jenny and especially Lenchen. “Love sharing and mutual need were incalculable. How could Marx ever hope to calculate Helene’s wages?” Barker has Marx wondering at one point. Yet instead of pursuing this paradox to a conclusion — that his obsession with calculus and infinity is, at best, tangential to the practice of revolutionary politics as a shared, and gendered, human experience — Barker’s Marx simply puts this question aside, not to pick it up again.

Ironically, these character flaws also make Marx come across, if not entirely as a sympathetic figure, then at least as our contemporary. That is, as someone suffering from the same pressures, neuroses, and anxieties that many experience today, despite capitalism having promised to alleviate them through the near unlimited choice of commodities and nonstop entertainment. Capitalism is the cultivation of bourgeois desire, we are told at one point, in a remark even more accurate in the twenty-first century than the nineteenth. Karl and Jenny are themselves on the margins of the nineteenth-century bourgeois experience, people of education and “culture” who are painfully aware of their downward mobility at a time when the society they were brought up in is mutating before their eyes.

Marx Returns ends on an uplifting note, with the news of the Paris Commune reaching an exuberant and ageing Marx in London, who is by then beginning to gain some attention and renown. The choice to end the book with a call for the people of Paris to defend themselves against the pending assault from the national army, just days prior to the massacre of thirty thousand communards, is telling. The brutal suppression of the first government of the working class in European history anticipated the horrors and destruction of the twentieth century. Yet by invoking the Commune as a historic Event, the novel presents it as a symbol of an unfinished political project — one that links Marx to subsequent working-class militancy up through the present, thereby also “returning” him to us as an interlocutor.

At one point, a despairing Marx thinks that “instead of being a theorist of the here and now, he was destined to end up as a ‘posthumous’ author, dug up like the Great Fossil Lizard for future generations and taken for a quaint observer of futures long since past.” Yet today Marx is being read not as an antiquarian thinker, but with the fresh eyes of a new generation of activists, scholars, and citizens who see him as an enduring analyst of capitalism and its crises.

The 1990s and 2000s assured us that we could not afford to believe in the immanence and historical necessity of communism. In contrast, the present decade is suggesting that capitalism and the relations of domination that it generates are not a viable long-term solution for human flourishing and the preservation of our planet.

Perhaps there is time yet to stop the headlong rush of the train of capital toward the edge of the precipice. Or perhaps later civilisations will unearth and display the artefacts of our long-gone one, marvelling at our unwitting demise, as the Victorians of Marx’s time did when they resurrected the extinct “Mesozoic lizards” among the primeval smokestacks and machinery of nineteenth-century London.

Rafael Khachaturian is a Postdoctoral Fellow in the Center for the Study of Democracy at the University of Pennsylvania.

This article was republished with permission from Jacobin. Read the original here.