The state-produced stories, which include tales about apartment lotteries, theme parks and the Clintons, might seem absurd. But they offer a window into the regime's priorities and anxieties. The state-produced stories, which include tales about apartment lotteries, theme parks and the Clintons, might seem absurd. But they offer a window into the regime’s priorities and anxieties. 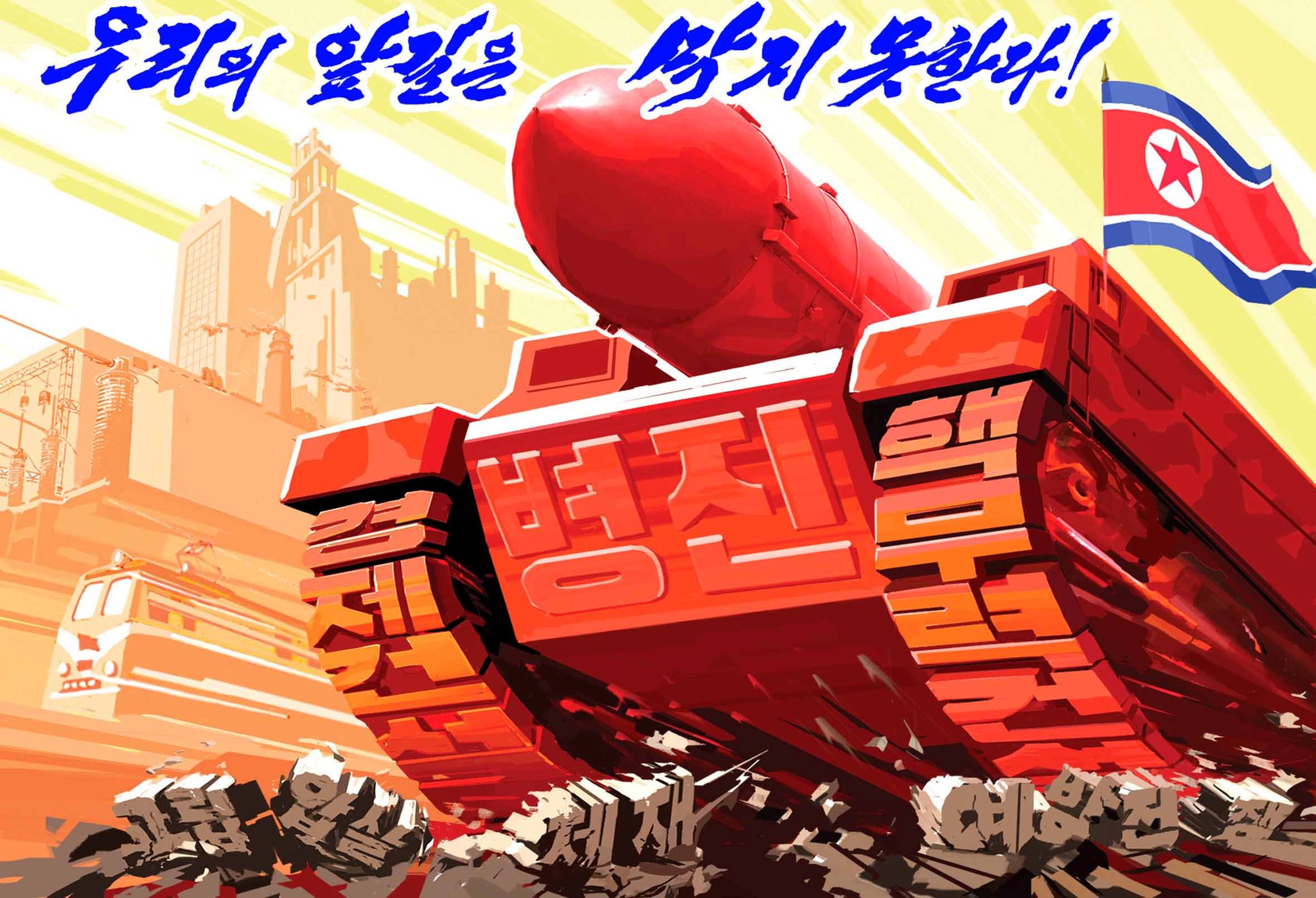 North Korea Propaganda poster. This one says, “No one can stop our march forward!” Credit: Reuters

With colourful rhetoric about dotards and nuclear buttons, North Korean propaganda is attracting attention around the world.

Outside observers can now easily access some of this propaganda by visiting regime-sponsored websites. These have, in turn, spawned foreign feeds like the excellent KCNA Watch media aggregator and satirical sites such as “Kim Jong Un Looking at Things.”

However, there’s another side to North Korean political messaging, one directed at the domestic population.

Difficult to access and written in a highly stylised, dogmatic prose, North Korea’s domestic propaganda is not only largely ignored abroad, but it’s also difficult for even South Koreans to understand. It includes state-sponsored Chosun Central TV broadcasts, state-produced films, and revolutionary operas and ballads.

But one of the more illuminating forms of internal propaganda is the regime’s state-produced fiction. Published in monthly literary journals, these stories are distributed by the ruling Korean Workers’ Party to select schools and offices around the country.

In an effort to make this internal propaganda more accessible to non-Koreans, I have been translating and blogging about selected works of North Korean fiction as part of my research on North Korean cultural politics.

These stories can offer outsiders revealing insights into the regime’s shifting concerns and priorities, which include a recent campaign to reinforce the legitimacy of their young leader, Kim Jong Un.

Penning tales for the regime

No other autocratic regime today has such a well-developed stable of artists and writers producing works aligned with the party’s ideological needs. The ruling Korean Workers’ Party has an extensive bureaucracy in charge of training talent, defining standards and commissioning projects in literature and other branches of the arts.

Like most professionals within North Korea, fiction writers belong to their own organisation within the ruling Korean Worker’s Party: the Chosŏn Writer’s Union. The Party, therefore, has direct control over what gets written about and which themes get emphasised.

Works of fiction are published in one of a handful of monthly literary journals, the most prestigious of which is Korean Literature, produced by Chosŏn Literature and Art Union Publishing. Other journals include Children’s Literature, Youth Literature and Literary Newspaper.

Within the Chosŏn Writer’s Union, the most elite authors comprise the April 15 Literary Production Unit. This group has produced all the major works dramatising the personal histories of the leaders, including the “Immortal History” (Pulmyŏl ŭi Yŏksa) and “Immortal Leadership” (Pulmyŏl ŭi Hyangdo) series, which constructed the official hagiography of Kim Il Sung and Kim Jong Il, respectively.

The list of authorship of new fiction about Kim Jong Un reveals many well-known names from these series, including Kim Sam Bok, Baek Bo Hŭm and Chŏng Ki Jong. Chŏng, one of North Korea’s most well-known contemporary authors, passed away in 2016, but not before penning the short story “Sky, Earth and Sea,” which details Kim Jong Un’s role in the Ŭnha and Gwangmyŏngsŏng satellite launches.

Since consumer demands and preferences are irrelevant to the creation of North Korean fiction, it cannot be evaluated as a reflection of the average North Korean’s underlying social anxieties (which is how a cultural anthropologist might study literature). Through interviews with North Korean defectors living in Seoul, I found that most North Koreans don’t spend their leisure time reading these journals for fun. Many, however, told me that they had been exposed to these stories at some point in school.

The anthropologists’ loss, however, is the political scientists’ gain. North Korean fiction offers a window into the ruling party’s priorities that’s just as informative as its official, externally directed propaganda. Reading between the lines

Many of these stories dramatise events in the leaders’ lives. Some are morality tales that showcase characters who embody certain socialist ideals. Others reflect concerns about the geopolitical landscape – and, not surprisingly, American leaders sometimes make guest appearances.

Chŏng Ki Jong’s most famous novel, “Ryŏksa ui Taeha,” depicts President Bill Clinton cowering under blankets during the 1994 nuclear crisis. Another short story from around that time, “Maehok,” tells the story of President Jimmy Carter’s famous 1994 visit from the perspective of his wife Rosalynn, as she meets (and is smitten with) the Great Leader Kim Il Sung.

More recently, however, stories have centered on one subject: Kim Jong Un.

Kim was formally designated as successor in September 2010. Prior to that, his very existence had been virtually unknown to the general public within the country. In a country where schoolchildren ritualistically memorise idealised accounts of their leader and his ancestors, it must have been mind-boggling to see a new leader on TV that they knew almost nothing about.

The regime had to rush to put together a personal legend worthy of the grandson of the nation’s founder. The first works of fiction to mention Kim by name appeared in early 2013, over a year after he succeeded his late father as leader. In these stories, there’s a marked thematic shift, with an emphasis on youth, creativity and innovation.

For example, the 2017 short story “Blossoming Dreams,” by Kim Il Su, depicts the young leader as a talent scout of sorts. He finds gifted young artists and architects and encourages them to participate more fully in various national construction projects. At one point he pontificates to one of his advisers about the value of youthful thinking:

“Our future as a socialist nation of culture will not be built by architects and experts alone. It will require all our citizens to become gardeners and creators adorning our country with beauty. And it is the young generation that must stand up to bring about this bright future. Lately, I hear the saying ‘everything’s getting younger,’ but isn’t that wonderful? This era is young, and our people are getting younger … ”

References to new luxuries and recreational facilities are another notable feature of recent stories. Since Kim became supreme leader, he has poured resources into developing Western-style amusements such as water parks and ski resorts.

One such site, the Rungna People’s Pleasure Ground, attracted international media attention after Kim Jong Un toured the facility in 2012 on his first official photo op with his new wife. An ode to the Rungna park appeared in Literary Newspaper in October 2012, celebrating it as “the creation of heaven and earth following the leader’s path.” In “Blossoming Dreams,” Kim Jong Un’s faithful minister of architecture recalls how the young leader “suffered in the summer heat and fierce winds” when touring the site of the soon-to-be-opened theme park.

In “Teacher,” a short story published in 2013, a family of schoolteachers is thrilled to receive notice that they have been given a spacious new apartment in the Changjŏn complex. The family is surprised to learn they made the list: It’s well known that the first apartments were supposed to go to “workers and innovators.” Later it becomes clear that Kim Jong Un personally directed that some apartments be set aside for educators as well, as part of a general priority for “cultivating the next generation.”

North Korean fiction, of course, shouldn’t be interpreted as a realistic depiction of actual conditions within the country.

But by reading between the lines, one may discern clues to the regime’s internal concerns, along with the messages it is most eager to convey to its captive domestic audience.