India's Democratic Erosion Was Long in the Making

A particularly resilient strain of communalism has always been present in the Indian body and this virus has burst out into the open, free, untrammelled and encouraged by the powers that rule India today. Photo: Tiago Rosado/Unsplash

The task, even duty, of a thoughtful commentator on politics is to focus not just on events but on processes and, by drawing appropriate lessons from them, examine the past and look into the future. Kapil Satish Komireddi, whose writings have appeared in prestigious publications in the UK and the US, has done that in Malevolent Republic and, though the book is a few months old, it reads as if it could have been published last week.

“None of those truths, however, negate the other truth: India’s moral claim to Kashmir is now threadbare. Kashmiri separatists who labelled India a ‘Hindu state’ could once be dismissed as chauvinists. And India could credibly argue for Kashmir’s place within its fold and promise a solution within the ‘constitutional framework’ because the religion of a majority of Kashmiris was irrelevant to full citizenship of the state. But now the separatists claim against India has nearly as much substance ad weight as Sheikh Abdullah’s against Pakistan, while the argument of ‘inclusive nationalism’ employed by Modi’s predecessors to persuade Kashmiri separatists to participate in elections is not available to him, a religious nationalist and nor is it available to India under him.”

The chapter is titled Disunion, and comes at the end of the book, following other chapters called Cult, Chaos, Terror, Vanity, and Seizure. These are in the section called India Under Modi. The earlier section is Antecedents, offering a racy and potted history of the years before 2014, and the chapters here are Erosion, Surrender, Decadence and Dissolution. It is an intensely readable book, a robust primer of the political history of modern India, but its central thesis is challengeable.

Komireddi’s ‘pox on all their houses’ theory is that since Nehru, every prime minister and government has not hesitated to undermine Indian democracy, either by design or inadvertently, and it has created a fertile ground for Modi to emerge. It is an attractive proposition, but it ends up equating the sheer venality of the Hindutva nationalism project, which is central to Modi’s and the Sangh’s vision, with the failures and flaws of the others.

Nehru and Indira Gandhi may have been dynasts (not that unusual in Indian politics) and may have had an authoritarian streak, but they were certainly not driven by a desire to convert India into a Hindu rashtra. By not even considering the good that came out of the seven decades of pre-Modi rule, the current dispensation is let off as little more than another step in a continuum that started after 1947.

Komireddi is relentless in his dismissal of earlier prime ministers. Calling Manmohan Singh a ‘place holder’ for the Gandhi family, Komireddi writes:

“Those who profited from Singh’s abjectness, in the long run, were Muslim extremists in Pakistan and Hindu supremacists in India. But if his actions were anything to go by, what mattered to Singh the most was a pat on the back from Washington”. 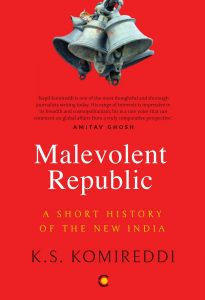 Narasimha Rao “led India out of one of the worst economic crises in its history, opened it up to the world…(and) in doing so, he corrupted India’s democracy and crippled its commitment to secularism.”

But it is the Nehru Gandhi family that draws his ire the most—he mocks Rajiv Gandhi who was called Mr Clean, he eviscerates Indira Gandhi for taking over the Congress, subverting the judiciary and destroying institutions and he accuses Nehru of laying the foundations of a dynasty and having an authoritarian streak, though “tempered by a genuine aversion to dictatorship and rigid adherence to democratic procedure. He did not always get his way, and he accepted the outcome when he did not.”

All perhaps true, but in Komireddi’s telling, the context of how events unfolded remains either unexplained or underdeveloped. He relies on the books by Kuldip Nayar, no admirer of Mrs Gandhi, for an account of those times and while writing about her battles with the old guard in the Congress – the so-called Syndicate – but tells us little about their own antecedents or their motivations.

Kamraj, Morarji Desai or Nijlingappa had no credibility, let alone mass support, and their fight was out of pique not principle. It is important to know this, even if it can be argued that Indira Gandhi was defying the party bosses to seize control of the party.

They were perceived as pro-big businesses while she was seen as pro-people—the bank nationalisation was not simply a crowd pleaser, it was to snatch away private banks from big business which used them as their personal treasure chests. Ditto the privy purses of the erstwhile royal families. It may have played big with the gallery but these measures were critical in a developing economy that was barely able to feed its millions.

The 1971 elections, two years after the split, demonstrated the popular appeal of her measures. Her opponents, inside and outside the party, were no heroes either. The Emergency is and will remain a blot and she paid a heavy price for it—India has since changed so much that the 2002 pogrom not only failed to cause harm to Modi, but likely enhanced his appeal.

Komireddi is the most scathing about Modi and traces his institutional subversion and the manner in which his government has crushed dissent. “Members of the ABVP sniff the air each morning for fresh offence, trade the origin of the origin to a Dalit scholar or a Muslim student or a liberal or left-wing student organisation, accuse the offenders of propagating ‘anti-national’ ideas, and trigger unrest and agitation until the university, shivering with dread, takes punitive action”, he writes.

Much of Komireddi’s argument is driven by his personal angst of seeing his most cherished value systems demolished, which he illustrates via the story of his childhood friend, Murad. Komireddi’s father, a die-hard secularist, had admitted him to a school, which was a madrasah in Hyderabad. He was the only Hindu boy in the school, an object of curiosity and wonder, and he recounts those early days with great affection.

Murad and he meet up after many years, by which time the Muslim boy has faced untold vicissitudes, including incarceration and riots caused by events in faraway Ayodhya, and his faith in India has been rudely shaken. It is a ‘rupture’, Komireddi writes, and many Indians have felt that sense of something that is broken forever. For the Muslims, the feeling must be even more brutal and immediate.

There is malevolence in the air, of that there is no doubt. A particularly resilient strain of communalism has always been present in the Indian body and this virus has burst out into the open, free, untrammelled and encouraged by the powers that rule India today. Today Indians can openly express sentiments that were anathema in polite company and in the media.

The prime minister talks of ‘baby-making factories’, while referring to the abject camps where Muslims have been housed. He is cheered. Kashmiris are made prisoners in their own land—he is applauded for this act in India and abroad. It is indeed the New India.

But in an earlier time, the very fact that such sentiments were kept in check and there was – for a long time after independence – a belief in the secular and liberal idea, shows that India had leaders who wanted to steer it away from its baser instincts.