All of Shahid's poetry resonates with nostalgia, longing, memory and at times, the loss of memory of his home itself. “I hope mail is not much disrupted because of the problems in the country and that this letter reaches you. I hope this madness stops, with all my love and even more, much more.” Agha Shahid Ali wrote in a letter to his family dated November 4, 1984. Kashmir was always on Shahid’s mind no matter how far from home he was. It was a giant negative for him, a measuring tool.

There are many books that shed light on the suffering of the people of Kashmir and their plight, the most influential literature was written by Shahid. There is no denying that exiles have produced the subtlest, yet violent political nuances of protest through their poetry that is reminiscent of an inescapable sense of nostalgia and helplessness.

Agha Shahid Ali, similar to Osip Mandelstam and Mahmoud Darwish, is considered to be a poet of exile, for his poetry illuminates the effects of an exile and the transformations that the home endures in the poet’s absence. He is appraised as one of the most charismatic poets to stem from Kashmir, but in reality, was never exiled, unlike the others. Shahid had immigrated to the US by choice. While he wasn’t exiled by a nation state or an ethno-religious community like Darwish, Mandelstam and Joseph Brodsky, he was simply a migrant.

Born on February 4, 1949, in New Delhi, India, Shahid belonged to a cultured, educated Kashmiri Muslim family. He immigrated to the US in 1976 and completed his PhD in English from the Pennsylvania State University. He pursued a Master of Fine Arts (MFA) in creative writing from the University of Arizona and taught MFA Programmes at University of Massachusetts, Amherst, at the MFA Writing Seminars at Bennington College and at the University of Utah and NYU.

On December 8, 2001, he passed away after a long struggle with a brain tumour, an illness that had been the cause of his mother’s death, and he rests at Northampton. All of his poetry resonates with nostalgia, longing, memory and at times, the loss of memory of his home itself. When the situation in Kashmir aggravated, Shahid was in the US and perhaps it was not spatial migrancy that affected him, but one that was cultural. But while the crackdowns were taking place, Shahid was living in Amherst and writing about Kashmir just like Emily Dickinson, who he admired with all his heart. 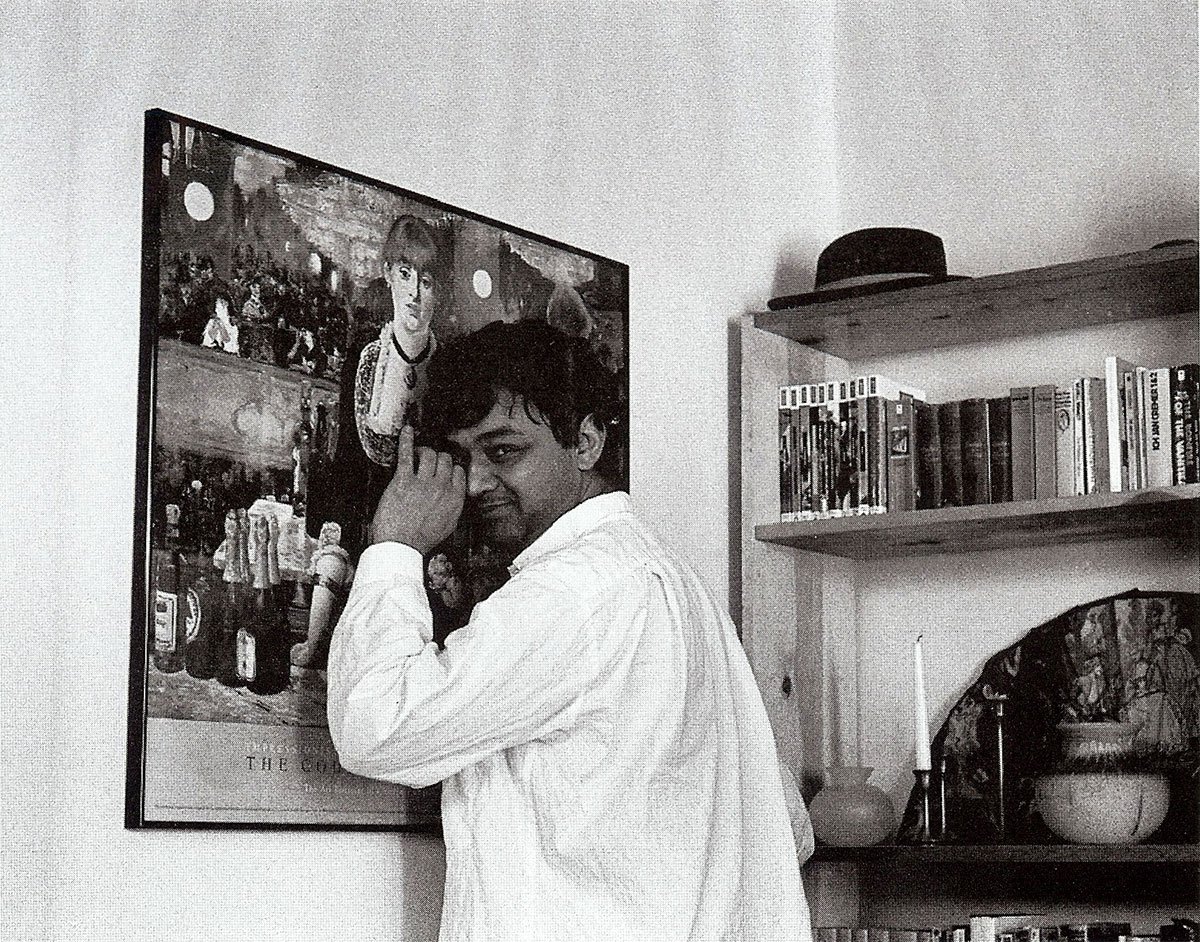 When the situation in Kashmir aggravated, Shahid was in the US and perhaps it was not spatial migrancy that affected him, but one that was cultural. Copyright © 1990 by Stacey Chase.

In an interview with Stacey Chase, Shahid talked about his exile as an involuntary state that he has been pushed into. That the reason he uses the term exile and not expatriate is because the former is a term with a lot of resonance, because it describes some of the emotional states that the latter would not. Shahid had imposed a feeling of exile on himself and through his flamboyant poetry, he made the exile a dwelling place for himself and the reader, proving Darwish’s opinion that one can be an exile in his homeland, in his own house, in a room.

Shahid upbringing was absolutely secular. He loved the painting of St Veronica’s Handkerchief, that Zakir Hussain had gifted to his father, Agha Ashraf Ali. In fact, the first poem that he had written was at the age of 12 about Christ. Shahid, and his brother Iqbal, both studied at an Irish Catholic school and in an interview, he recalled that: “There was never a hint of any kind of parochialism in the home.”

That is precisely the reason he talks about the “Temples and Mosques locked in each other’s reflections” in his poem ‘Farewell’, which he describes as a ‘plaintive love letter from a Kashmiri Muslim to a Kashmiri Pandit’. Shahid wrote about the situation, loss, injustice and brutality in his homeland as he mourned over a lost paradise.

In another poem ‘Dear, Shahid’, he writes: “Everyone carries his address in his pocket so that at least his body will reach home”, and it is a plight that the Kashmiris face even today, for it is a region that has been the heart of contention for decades. And whenever Shahid talks about Kashmir, the language of loss through which he speaks is almost palpable. His words are not that of a diasporic writer, but those of an exile who is longing for his homeland. Kashmir is the most vibrant and evident in his poem ‘Postcard from Kashmir’:

Kashmir shrinks into my mailbox,
my home a near four by six inches.

I always loved neatness. Now I hold
the half-inch Himalayas in my hand.

This is home. And this is the closest
I’ll ever be to home. When I return,
the colors won’t be so brilliant.

The Jhelum’s waters so clean,
so ultramarine. My love
so overexposed.

And my memory will be a little
out of focus, in it
a giant negative, black
and white, still undeveloped.”

Other poems foreground Shahid’s wit and his scintillating sense of humour. His poem (whose title is longer than the body of the verse) ‘On Hearing a Lover Not Seen for Twenty Years Has Attempted Suicide’ in its entirety reads: “I suspect it was over me”.

There is no sense of reconciliation in Shahid’s poetry, but only a nostalgic glow that leaves the reader spellbound. Even unfinished poems that were recovered from his apartment after his death echo with a half-faded feeling of loss and memory. The first loss that Shahid experienced was decades before his mother passed away, and years before he moved to the US. It was on the occasion of Begum Akhtar’s death in 1974.

Begum Akhtar, a ghazal singer was one of Shahid’s favourites along with Faiz Ahmed Faiz. He was a huge admirer of the singer and recited her ghazals often. Amitav Ghosh, in his eulogy ‘The Ghat of the Only World’ wrote that it was Begum Akhtar who engendered his passion for the ghazal. In his poem ‘In Memory of Begum Akhtar’ he wrote:

“The hostess pours tea, hands me The Statesman:31 October 1974? BEGUM AKHTAR IS DEAD:
under the headline: her picture:
she smiles: she lights a Capstan.
Sharp in flame, her face dissolves in smoke.”

In his eulegy, Ghosh points out how Shahid loved festivities and food. Even when he was staring at death during his final years, Shahid was gregarious and joyful. “I love it that so many people are here,” he told Ghosh once. “I love it that people come and there’s always food. I love this spirit of festivity; it means that I don’t have time to be depressed.”

Ghosh, in his eulogy, recounts one famous incident at Barcelona airport. Shahid was stopped by a security guard just as he was about to board a plane. The guard asked him what he did and he answered by saying that he was a poet. When the guard further questioned him about what he was doing in Spain, he said that he was writing poetry. Ghosh wrote that “no matter what the question, Shahid worked poetry into his answer.” And when finally, the guard asked if he was carrying anything that could be dangerous to the other passengers, Shahid pressed his hand to his chest and spoke, “only my heart.”

Yet, his poetry reflects another face. One that represents him as a bearer of pain and longing, and they remain heart-wrenching. His poem ‘The Veiled Suite’, which was included in Harold Bloom’s Till I End My Song: A Gathering of Last Poems, an anthology where he has curated works of one hundred poets over a period of hundred years, ends with these lines.

“What arrangements haven’t you made for tonight!
I am to hand you a knife from behind the veil
now rising quickly from your just-lit incense.
I’m still alive, alive to learn from your eyes
that I am become your veil and I am all you see.”

Shahid was well versed in the language of longing, and all his poems affirm this statement. His poetry leaves a deep impact on the reader that remains rooted in one’s heart for a long, long time. Even in his later poems from ‘Rooms are never finished’, Shahid continues to speak in the nostalgic tone that he had mastered by then. His poetry haunts the reader and etches itself to one’s core. Even when he is talking about something as banal as his name, he is able to attract the attention of the reader. In the last couplet of his ghazal, in Arabic, he writes.

They ask me to tell them what Shahid means: Listen, listen:
It means “The Beloved” in Persian, “witness” in Arabic.

This couplet is inscribed on his tomb in Northampton. In order to reveal Shahid to the world, The Beloved Witness Project, that derives its name from the same couplet, has been started by Patricia O’Neill who was Shahid’s colleague at Amherst. The Beloved Witness Project of Hamilton College’s Digital Humanities Initiative is a digital archive of the videotaped readings, personal documents, letters and manuscripts amassed by Hamilton College through contributions of letters, documents, critical perspectives and creative responses from colleagues, friends and readers of Shahid’s works. It aims to preserve his letters, and documents in order to gain more insight about Shahid.

Manan Kapoor is the author of The Lamentations of the Sombre Sky. He is a Senior Review Editor at Jaggery and is currently pursuing a masters degree in Creative Writing and Literature at Ambedkar University, New Delhi.