Bharatanatyam as an Object of Majoritarian Cultural Nationalism

The dance is one among a few cultural objects today – like Ganesh Utsav, the thickening sindoor that women display, freshly minted greetings like ‘Jai Shri Krishna’, bhajan sandhyas – being deployed. 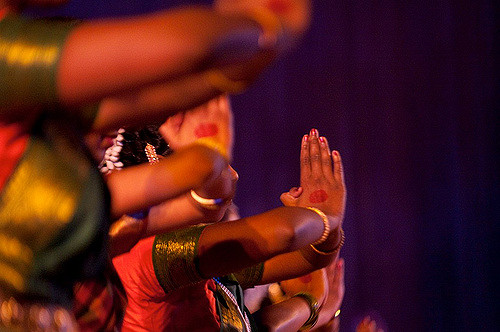 What is true nationalism? What is pseudo-nationalism? What is anti-national? What is patriotism? Is the shouting of nationalist slogans important to prove one’s patriotism? Why is Bharat Mata ki Jai so important to the right wing? Why does the law of sedition continue to exist on the statute book of an independent country? Who should the sedition law be used against? Why is cultural freedom important to a nation? What sort of India do we want? What sort of Indians do we want to be? What sort of country do we want to leave behind for future generations? These questions all involve one of the most fundamental ideas of India—the nationalism we inherited at birth. It is also one of the most hotly contested ideas of the twenty-first century.

In On Nationalism, Sadanand Menon, Romila Thapar and A.G. Noorani – some of India’s  finest thinkers and writers – provide calm, measured insights into the origins, nature, practice and future of Indian nationalism. Excerpted below are sections from Menon’s essay, ‘From National Culture to Cultural Nationalism’. Ideas of cultural nationalism emerged hand in hand with late nineteenth-century ideas of nationhood itself. Nationalist leaders like Tilak worked on constructing the idea of a glorious and ancient Indian past, heavily inflected with Hindu symbology, as a strategy to fight the imperialist. This was one of the ways in which the national movement hoped to forge a common Indian identity based on a glorious past (composed in equal parts of myth, legend and select incorporations of historical facts). The idea of the past that the national struggle sought to create in its early days was one of a pre-historic India of mythic origins that was divine, pure, monolithic and untainted by any polluting ‘external’ influence. This itself was a myth, for the subcontinent has been host to an unending procession of cultures and claimants who have tromped through it over at least three millennia. Yet the attempt was to make culture the sole base for the formation of the independent nation. Inevitably, because of the majoritarian Hindu population and the national leadership that represented them, this notion of the past that was more or less upper caste and Hindu became conflated and interchangeable with the idea of the new emerging nation in the minds of most of those involved in the independence movement. In some cases, this was deliberate, in others it was inadvertent. The prototype of how cultural nationalism came to be constructed here can be divided into a few distinct phases.

The first phase is what would be best described as incipient nationalism. It begins with the early impulse to shape the country’s cultural identity by reforming Hinduism itself. English educated, upper-class/caste Indians of the period begin to take to heart the critique as well as construction of Hindu society by ‘well-meaning’ Western scholars. Customs considered ‘barbaric’ like child marriages, the practice of sati, the isolation of widows, the dedication of women to temples as ‘devadasis’, caste discrimination are all seen as retrograde and deplorable. Reformists like Raja Ram Mohan Roy emerge in the early part of the nineteenth century to campaign actively against such ‘evils’ and set the house in order. The setting up of the Brahmo Samaj is clearly an early step in articulating a self-conscious new nationalism. It gets further articulated by more aggressive reformers later in the century like Ishwar Chandra Vidyasagar and Jyotiba Phule. Swami Dayanand Saraswati sets up the Arya Samaj, which simultaneously calls for reform within the Hindu religion and builds defences against erosion by other religions through elaborate rituals of purity and restitution. The frenzied ‘ghar wapsi’ of today is not all that original an idea. Here the Vedas are considered to be the foundation of Indian nationalism. Hindu tradition is invoked for claiming cultural autonomy, for critiquing certain social practices, as well as for providing cultural foundations for assertive nationalism. Mohinder Singh, in ‘Crisis & Critique: Diagnosis of the Present in Nationalist Discourse in Hindi, 1870–1908’, has made the point that ‘nationalism absorbs traditions superficially; in truth it remains nationalism’s suppressed other’. As A. G. Noorani points out in his essay on the origins of Bharat Mata, a more militant version of nationalism is provided in 1882 by the publication of the novel Anandamath by Bankim Chandra Chatterjee. This was to soon assume the proportion of a manifesto for Hindu nationalism, as Bankim plays with all the tropes of exclusive nationalism— protecting his nation from any external defilement. His idealized nation is Anandamath. The deity he worships is an already militarized, ready-for-battle Krishna who will lead his chosen ones to victory. And, of course, ‘Vande Mataram’ is the battle cry around which he rouses the hordes. It is pertinent here to evoke Sudipta Kaviraj’s masterly study, The Unhappy Consciousness: Bankim Chandra Chattopadhyay and the Formation of Nationalist Discourse in India, where he suggests how Bankim works around the fantasy of war against ‘outsiders’, which included the British and the Muslims. He thus provides a powerful imagery for a future nationalism, which was influential enough to be celebrated in theatre and cinema over the next seventy years. And ‘Vande Mataram’ itself (coupled with ‘Bharat Mata ki Jai’) emerged as the new talisman with which to measure not only one’s patriotism but one’s very nationality. The sheer ecstasy and rapture into which Hindutva hacks went when A. R. Rahman performed in a virtuoso track of ‘Vande Mataram’ nearly a decade ago was never repeated for any of his other works.

In 1905, coinciding with the partition of Bengal, Abanindranath Tagore paints an image of ‘Banga Mata’ (Mother Bengal). This was soon to be recast as ‘Bharat Mata’ (Mother India), which marked one of the earliest attempts, building on those by Bankim, to cast the nation in the shape of a benevolent mother. This was still a benign image in the gentle wash style of the Bengal School, where the image is soft and radiant and holds promise of bounty, prosperity and benevolence. Subsequently, as the struggle for independence intensified, so did this image of the benevolent mother become increasingly ferocious, a cross between a Durga and a Kali, riding a tiger and fully armed. Bharat Mata took on a distinctly militant identity that was used to mobilize the Hindu flock, irrespective of political persuasion.

It must be said here that ‘Bharat Mata ki Jai’ is not an attribute of patriotism, but of deep patriarchy. Extreme mother-love is a camouflage for extreme misogyny. Over the past few years in India, the nature of the violence inflicted on women during rapes, riots and caste retributions is of an order seldom witnessed before in any part of the world, except perhaps, in Bosnia during the civil war, or in the Congo, or in Sri Lanka during the final moments of the pogrom against the civilian Tamil population there. From the barbarity of the jawans of the Assam Rifles on Manorama Devi, to incessant mass rapes by soldiers in Kashmir, to the graphic and horrific brutalities (that were videotaped) on even pregnant women in Gujarat in 2002, to the Nirbhaya case in Delhi, there is no evidence to prove that devotion towards an abstract ‘Bharat Mata’ translates into even a semblance of affection or respect for real flesh and-blood women. Indeed, here it is only literally the flesh and blood that seems to matter. Add to this the kind of vile trolling and rank verbal and mental abuse that independent women activists/writers who stand up for rights and against bullying—like, say, Kavita Krishnan, Teesta Setalvad, Arundhati Roy, Shabnam Hashmi, Shehla Rashid, Rana Ayyub and others—are attacked with indicates a level of morbidity and sexual repression that should be unsustainable in a democracy. Cultural nationalism can truly be said to have arrived when this confusion about one’s identity and sexuality produces a permanent pathology of inadequacy, about which Austrian psychoanalyst Wilhelm Reich has so insightfully written in The Mass Psychology of Fascism (1993). For Reich, cultural nationalism is the basic emotional attitude of the suppressed man. He sees the ‘authoritarian family’ as the base of the middle classes, which is held together with the help of religious fears and rampant mysticism, infused in turn by sexual guilt embedded in their emotions. Religion, thus, leads to negation of sexual desire. Sexual disability results in lowering of self-confidence. This is often compensated by the ‘brutalization of sexuality’. The good doctor was analysing Germany of the 1930s; he might as well have been putting contemporary India on the couch.

The quest for a coherent ‘national culture’ during the various phases of a national movement creates many aberrations that last well into the post-colonial state. That extraordinary philosopher of anti-colonialism, Frantz Fanon, has made abundantly clear that, ‘A national culture under colonial domination is a contested culture whose destruction is sought in systematic fashion.’ Yet, he warns against the pitfalls of such national consciousness which, he says, ‘instead of being the all-embracing crystallisation of the innermost hopes of the whole people, instead of being the immediate and most obvious result of the mobilization of the people, will be in any case only an empty shell, a crude and fragile travesty of what it might have been’. It sets up many a mock battle internally which later goes on to become a vehicle for mutant forms of cultural nationalism. Often, the agency for this is the idea of the ‘moral nation’.

The national movement sets up its legitimacy vis-à-vis the colonial apparatus as a morally superior idea that is jettisoning all its old ambiguities and reinventing itself. Such an image is, primarily, a moral construction, which admits no ‘pollutant’.

Take the case of Bharatanatyam and how it was adapted in the late 1920s/early 1930s from its earlier version as Sadirattam or Dasiattam, performed by the socially ostracized community of devadasis (belonging to the Isai Vellalar caste). It was one of those elements of culture that was aggressively appropriated and transformed to fit an imagined, idealized Hindu upper caste cultural identity. When the original dance form that unabashedly portrayed eroticism and conveyed sensuality (shringara) transited to the upper class/caste Brahmin community in cosmopolitan Madras, it also resulted in a bowdlerizing and sanitizing of the form.

In the case of Bharatanatyam, this led to the rather swift conversion of the dance form into a platform for entirely mythologised and socially sanctified content, almost transforming it into a vehicle for proselytisation. A distinctly Brahminical content for the dance gained currency as the project for restructuring collective memory was initiated at the height of the national movement. While myth and memory conventionally serve to preserve identity and provoke bonding through the evocation of a shared cultural heritage, these can also be used as political weapons to impose a hegemonic memorial narrative that seeks to privilege a narrow vision of specific historical events.

Bharatanatyam is one among a few cultural objects today, like the Ganesh Utsav or Raksha Bandhan or the thickening sindoor that women across communities display or freshly minted greetings like ‘Jai Shri Krishna’ or the bhajan sandhyas which are being deployed on the side of majoritarian cultural nationalism.

Sadanand Menon is adjunct faculty, Asian College of Journalism and at IIT, Madras. He is currently managing trustee of the Arts Foundation, SPACES, Chennai.