The Forgotten Life Sentence of Ramchandra Singh, a Prisoner of Memories

Ramchandra Singh’s shall be another unmarked grave in history. Remembering the anonymous revolutionary from Bangarmau – a man broken in love, and a man whose arrival on this stage of history coincides with his death. 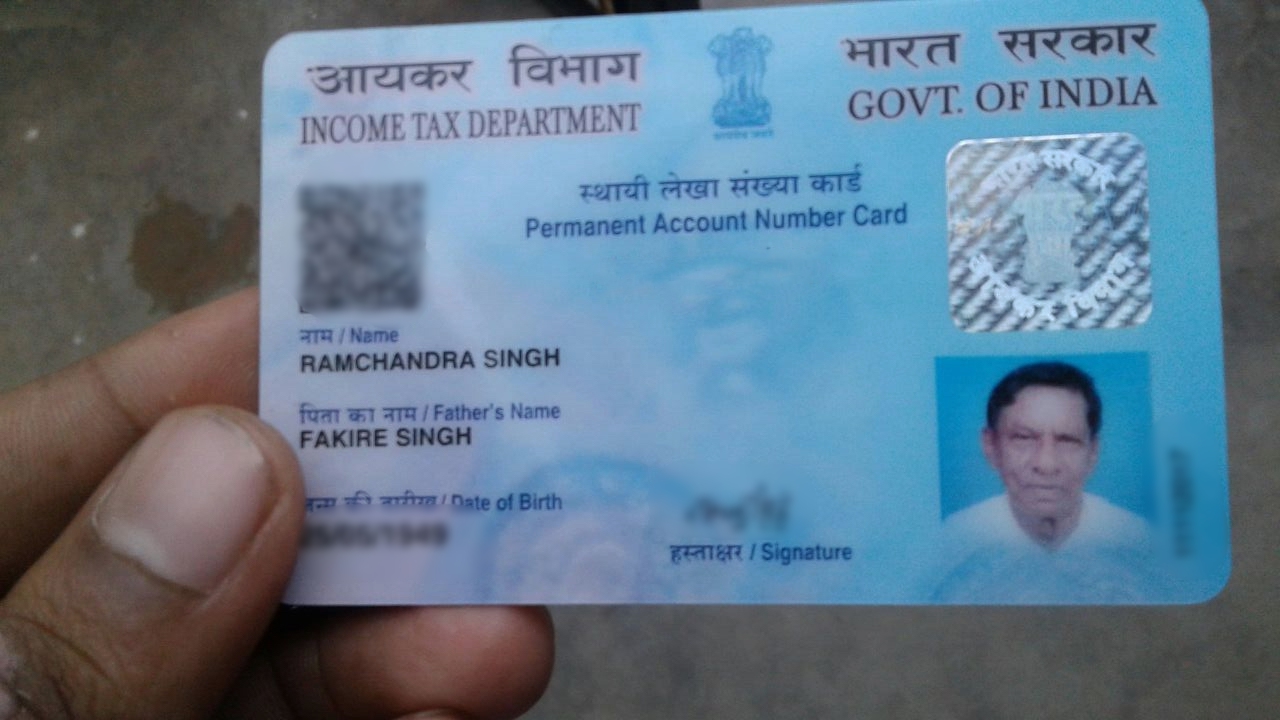 Do the anonymous travails of entire lives spent dedicated to egalitarian values amount to anything at all? Courtesy: Navayana.org 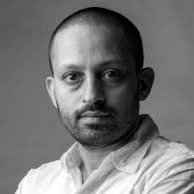 Ramchandra Singh of Bangaramau village, Unnao district, Uttar Pradesh, silently passed away at 2 am on 2 March. It was a brain haemorrhage that took him.

Anonymous that he was, there was no hue and cry about his passing. No social media obituaries celebrating his life. His is not a name you will find on Google. Needless to say, there weren’t any notices of his death in the corporate-controlled media, nor was there so much as a mention of his name in the alternative media — which too comes to us via the seemingly guileless charms of protean capital that peddles the belief that social media is the last hope for democracy and dissent.

One wonders, if a death goes unnoticed, was the life which preceded it worth the effort? Do the anonymous travails of entire lives spent dedicated to egalitarian values amount to anything at all? And yet, Ramchandra Singh lived a full life, a revolutionary life no less, with complete fidelity to his ideals, struggling and suffering without decoration. Had his autobiographical manuscript of 13 years spent in prison not come my way, I too wouldn’t have had the fortune of knowing him, spending time with him, writing this piece about him…

Inspired by the ideals of communism and the cry for an end to feudal oppression, Singh became a ‘party bachcha’, a party boy, when he was a 14-year-old student in the eighth grade. This was around 1960–61. He immediately became an active member of CPI(M) and found himself on the party’s district committee. The Naxalbari uprising — India’s 1968 — broke loose in 1967. Singh inevitably found himself answering Charu Mazumdar’s call in his campaign for the ‘annihilation of class enemy’, a movement that drew inspiration from the Chinese Cultural Revolution.

In 1970, he participated in a 12-man attack on an oppressor landlord who terrorised peasants under his thrall. The landlord, from village Bakhaura some 15 kilometres from Bangarmau, was annihilated, to use the term Ramchandra Singh preferred. But just as easily, most members of the squad were nabbed and put behind bars. Ramchandra Singh was one of them: he was awarded a life sentence. From 1970 to 1983 he spent his 13 year imprisonment across five jails in Uttar Pradesh.

In 2012, Madhu Singh, a professor at the English department of Lucknow University chanced upon a prison diary, Thehre Hue Terah Saal (1970–83), at Dastavez Prakashan, a treasure house of books old and new. The man who ran Dastavez Prakashan, Prashant Kumar, had founded and edited a short-lived little magazine called Samkaleen Dastavez (Contemporary Dossier) in Lucknow. In May 1991, he had dedicated an entire issue of the magazine to this diary and published it under the title Thehre Hue Terah Saal. This was Ramchandra Singh’s diary, smuggled out of prison a few loose pages at a time. It had first seen the light of day way back in 1984 when another ‘comrade type’, Anand Swaroop Verma, had serialised it in Rashtriya Sahara’s Lucknow edition. Verma — who in 1977 had translated Mary Tyler’s My Years in an Indian Prison into Hindi (Bharatiya Jailon Mein Paanch Saal) — continues to dream of the revolution and runs a little magazine called Samkaleen Teesri Duniya (Contemporary Third World) from a small apartment in Noida. 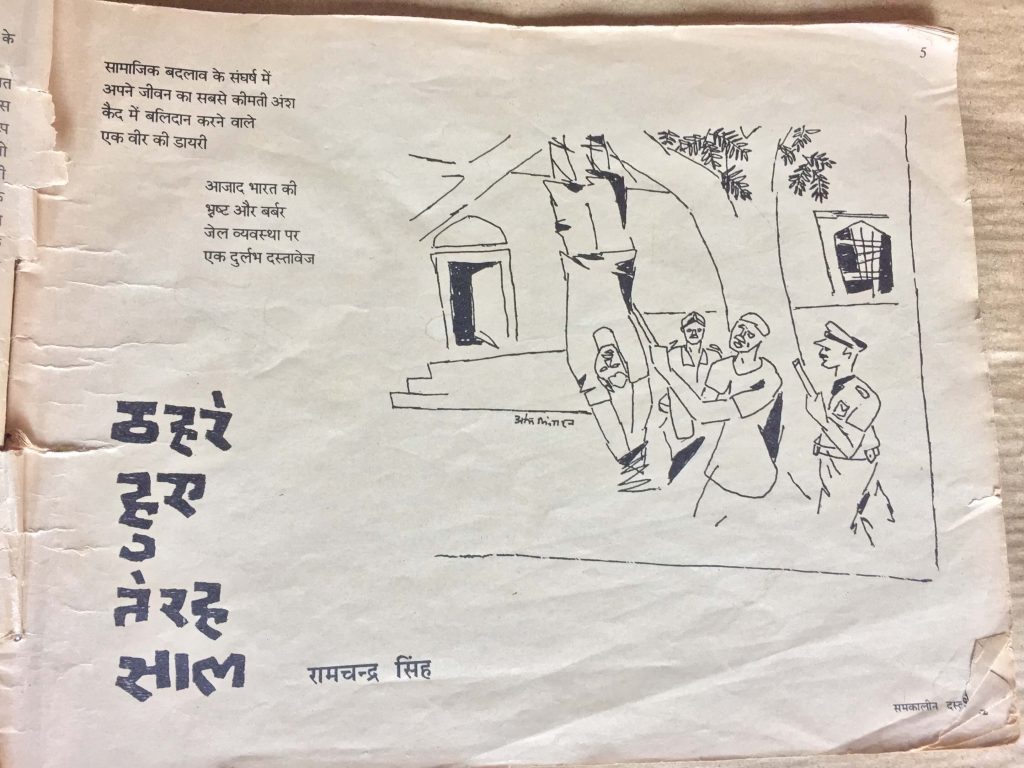 The May 1991 issue of Samkaleen Dastavez which dedicated itself to published Singh’s prison diary Thehre Hue Terah Saal (1970–83). Courtesy: Navayana.org

Madhu Singh was riveted by Singh’s writing. She immediately located his whereabouts and sought permission to translate his work into English. They met at Lucknow’s India Coffee House several times to discuss her translation and clarify things she did not understand. Armed with this manuscript, between 2014 and 2016 Madhu Singh looked for publishers only to face repeated rejection: the political climate deterred many; others reckoned that the book would have had a market had it focused on the Emergency years and not been a memoir.

More plainly, Ramchandra Singh was not a name to reckon with. How would such a book even sell? Like his life, Singh’s work did not fit easily into a slot. Just the thought of G.N. Saibaba’s treatment by the state, or how Arun Ferreira and Sudhir Dhawale and nameless others are tortured is enough to make the insular middle-class think twice about associating with such a figure. Besides, unlike others who were grossly wronged by the state and labeled naxalite for merely reading and thinking thoughts critical of the state, for being ‘sympathisers’, Ramchandra Singh was a convicted naxalite who dreamt of the revolution. He did however give up on violence and the ‘annihilation’ project — and the book tells us how and why he came to such a decision while in prison.

Despite Madhu Singh being averse to an ideology that espoused violence, she was inexorably drawn to the story and the way Ramchandra Singh told it. After all, his was also a story of love and heartbreak. Once Singh stepped out of jail, neither his old comrades nor his lover were found waiting for him. Some of them had settled down into professional lives. His love, Munni/Ramdulari, had moved on. Born into a poor ‘backward class’ family that belonged to a numerically inconsequential jati called Arak that few even in UP know of, and having known bitter poverty since childhood, he could not ‘return’ to anything. Yet, he did not cease to fight for a just society.

At the time of his death he was a member of the Communist Party of India (Marxist–Leninist) Red Star — one of the many factions within ‘ML’ that broadly owes allegiance to the Chandra Pulla Reddy line of ‘self-criticism’, though there are many subgroups even here. Singh served on the party’s central committee and was also part of the editorial board of Red Star Monthly (Hindi).

Soon after I read the draft manuscript, I spoke to Madhu Singh, boarded a train to Lucknow, and we drove to Bangarmau to meet Ramchandra Singh. It was 20 January 2017. Spending the night in his modest home in the qasbah, I interviewed him for about five hours. The transcript of this conversation would appear as part of the book I was to publish. It helped that Ramchandra Singh spoke with the same kind of deliberation and thoughtfulness that was in his writing. He had an uncanny ability to vividly remember incidents from decades ago.

Here’s how he recalled a fellow prisoner who had been convicted for picking pockets:

One winter day, I was sunning myself, sitting on a slope. He came and sat by my side… When I asked how pockets are picked, he smiled and refused to show how it’s done. Then we chatted about many things. When the patch of sun moved away, he stood up to leave. ‘Sir, here, take this.’ He opened his fist and handed me a two-rupee note. ‘This note is yours,’ he said. I quickly checked my pocket and the two-rupee note I had there was missing. ‘When you were busy talking to me, I picked your pocket to show how it is done.’ I was surprised but not angry with him.

Presenting Singh with a copy of Angela Davis’ Are Prisons Obsolete?, a tract I had published in India to an indifferent response some years ago, I told him that I intended to approach her to write a foreword for the book. To my relief, and Singh’s joy, she agreed, and wrote a warm and moving piece:

Singh’s is a coming-of-age story of a revolutionary driven to move his world towards justice and equality, as well as the story of a radical activist behind bars, who begins to reflect deeply on tactics he previously embraced that, to his more mature self, seem to contravene the very goal of revolutionary struggle. It is also the story of love — romantic passion, as well as friendship and parental devotion.

Most impressively, Singh’s memoir demonstrates a deep engagement with language — captured seamlessly in Madhu Singh’s translation from the Hindi — which allows him to produce heart-rending descriptions of the effects of violence on his own body, compelling speculations on the temporal distortions of imprisonment, and interesting observations about the relationship between politics and love. His evocative prose opens the door to experiences that are otherwise beyond the apprehension of those who have not had the misfortune of learning firsthand the nature of imprisonment.

Although readers in the West are familiar with the works of such political prisoners as Antonio Gramsci, Elizabeth Gurley Flynn, Nelson Mandela, George Jackson, Assata Shakur and Mumia Abu-Jamal, they are largely unaware of the circumstances that have created a significant tradition of political imprisonment in India. Given that the writings of these European, US and South African figures are evoked by contemporary movements, particularly given the increasing focus on the prison industrial complex, Ramchandra Singh’s book should resonate with the present. 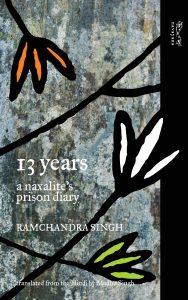 I had approached not just Davis, but a range of broadly left writers in the subcontinent who had never heard of Ramchandra Singh. The English translation of his memoir, entitled 13 Years: A Naxalite’s Prison Diary, drew admiration and endorsements from Varavara Rao, Arun Ferreira, Teesta Setalvad, K.R. Meera and Anand Teltumbde. Despite his self-abnegating nature that kept him both poor and obscure, Singh began keenly looking forward to the launch of the book. He had asked me once, ‘If you think it is alright, would it be okay to have Kanhaiya Kumar launch the book?’ I must perhaps call Kanhaiya now.

I wanted to pay Singh a modest advance upon the publication of the book. But I realised that he did not even have a PAN card. On my insistence he got one made. No one is spared the whims of the state. Before I could send him the advance copies of the book with the cheque, he was gone.

Late last January, when I tried photographing Singh in Bangarmau, he had waved me away. “I don’t have a nice face. I do not photograph well.”

I made an act of deferring to him, but shot a few on the sly. They did not turn out good. As the book went to press, I told him, hopefully, that the media may want his pictures, and that I needed one profile anyway for the author page of our website. He sent me a few pictures by post, studio stills of him looking stiff and frozen. The exasperation I felt then looking at those pictures soon turned into a realisation that maybe he is best revealed through his words, and the thought behind them — these shall remain with us awhile.

After his death, and after this book makes its way to bookstores by mid-April, Google may have something to show for him. Amazon will sell him. He’d have arrived.

S. Anand is a poet, translator and publisher. He is working on a book on raga music.