Five Books Make it to JCB Prize For Literature Shortlist

A common thread of dissonance with the world surrounding them runs through all five books. 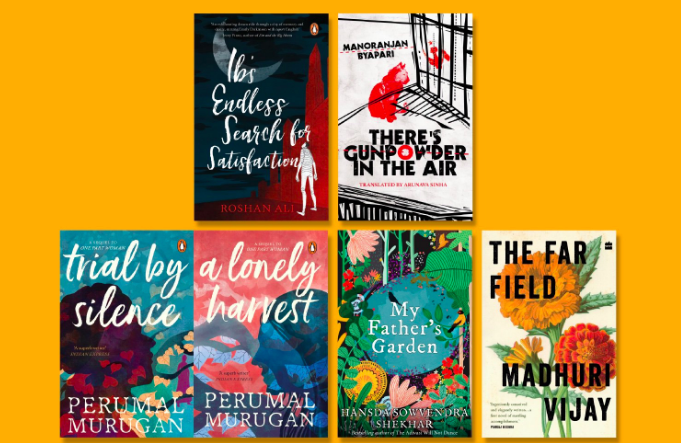 Books shortlisted for the JCB Prize for Literature. Photo: Twitter/@TheJCBPrize

New Delhi: The shortlist for the JCB Prize for Literature, containing two translations and as many debut novels, was announced on Friday, October 4.

The literature prize includes a Rs 25 lakh cash award. The winner will be announced on November 2.

Pradip Krishen, chair of the 2019 jury, was quoted as having said that the chosen five, “address the many specific difficulties of living a life in Indian society.”

A common thread of dissonance with the world surrounding them runs through all five books.

The shortlisted books are:

Both Madhuri Vijay and Roshan Ali are debutants.

Amidst readers expressing delight at favourite books having been chosen, there were a few who noted the absence of personal picks.

Super Disappointed that Milk Teeth didn’t make it for the winner my prediction is Far Feild and There is Gun Powder in the air. https://t.co/XQMNkestrP

And then there were five. @TheJCBPrize for Literature 2019 shortlist. pic.twitter.com/zWiZ2VkkSM

So delighted to see A Lonely Harvest and Trial by Silence, Perumal Murugan’s either/or sequels to One Part Woman, translated from the Tamil by Aniruddhan Vasudevan, and Ib’s Endless Search for Satisfaction by Roshan Ali on the @TheJCBPrize shortlist! pic.twitter.com/wevJxkP248