Freedom, Discipline and a Really Sleek Building: A Glimpse Into the Delhi Metro

A book excerpt highlights what this essential lifeline of India's national capital means to some and how the people who keep it running ensure its timeliness. 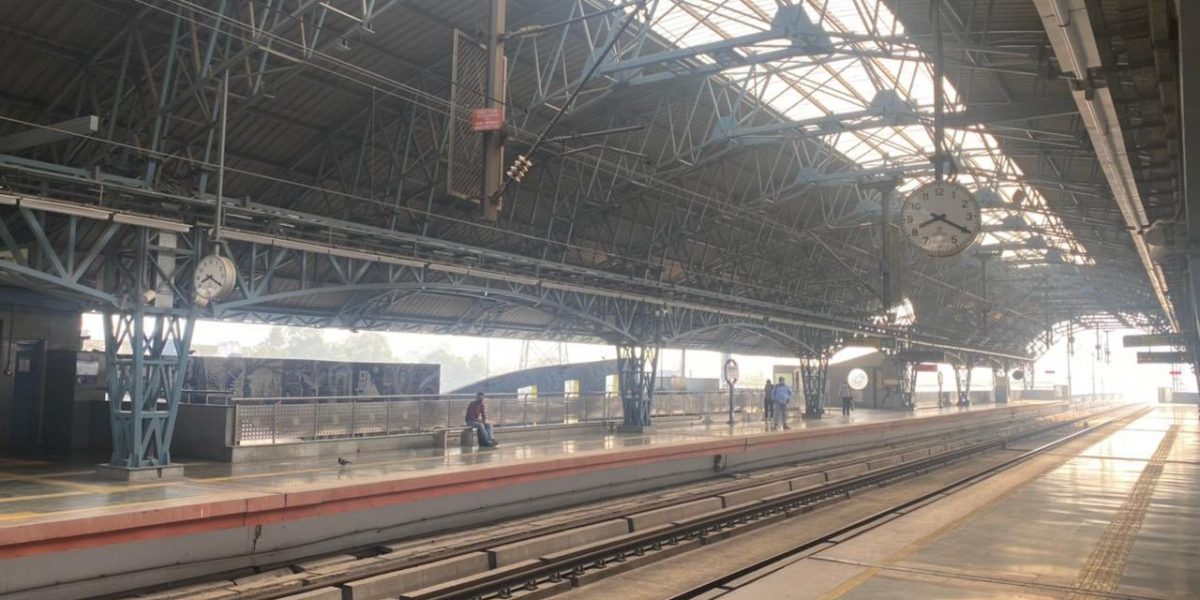 The following is an excerpt from Metronama: Scenes from the Delhi Metro by Rashmi Sadana, published in South Asia by Roli Books.

The book is published in the United States by the University of California Press as The Moving City: Scenes from the Delhi Metro and the Social Life of Infrastructure.

When Vanita and I meet at Dilli Haat one afternoon in 2009, she tells me that she’s had a “generally protected life.” We are sitting at a food court table in an open-air artisan market in south Delhi, but she’s describing 1960s Calcutta, where she grew up. “Someone was always taking me, I always went with someone – a grandfather, an uncle. Just to take a bus, you had to get down at the right stop.”

Vanita is a college lecturer and came to Delhi in the 1970s when she finished her postgrad education and got married. She doesn’t tell me anything about her husband other than “he knew how to drive.” He bought a secondhand car for them, and soon she couldn’t think of being in Delhi without one. They lived in east Delhi, and after some time they got a better car. They had a traditional middle-class division of labor: she looked after the children while he focused on his profession. 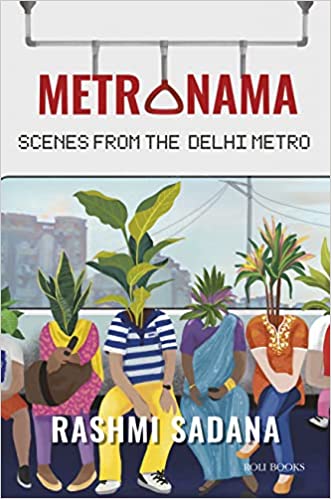 “He tried teaching me how to drive, but I was a late starter, I couldn’t deal with the traffic. I became more and more dependent on him.” Then they hired a driver, which Vanita came to understand as “this other dependence.” If her husband and the driver were not around, she’d call a taxi. They lived in Vasant Kunj by this time, which was badly connected to central areas of the city. “Autos always charged extra,” she says.

Not knowing how to drive and becoming dependent on a driver – first her husband and then a hired driver – framed Vanita’s relationship with the city for over thirty years. In 2004, her husband gifted her a new car, an Opel Corsa. She thought, “Since when have we become so rich? It used to be that you got a casserole as a gift. I only ever traveled in the car with him on a few special occasions.”

The idea of going anywhere alone, without the driver, didn’t cross her mind. It only changed with the rude and painful experience of her husband leaving her after twenty-seven years of marriage. Her husband suggested they sell the Corsa and buy her something small. He soon moved out of the house, and she continued to travel to Pitampura in the northeast of the city from Vasant Kunj, in south Delhi beyond the Outer Ring Road. She had a driver and took the other car, the “poor” Zen.

Several years on, the divorce proceedings were getting messier. Vanita got a stay order to keep the house but not the car. “My husband came with a key and took the car one day. My neighbor saw him.” She contacted the police, but they laughed at her when she told them the car registration was in her husband’s name. “That’s when I realized he used to take care of everything, even the mobile recharge. I had reduced myself to a complete state of dependence.”

And then a friend suggested she start taking the Metro, even though it required her to take an auto rickshaw until Central Secretariat, almost half the distance. The commute wasn’t really practical, but she did it anyway. “The Metro became part of my day-to-day,” Vanita says. “You have to walk fast; you can’t waddle along. You can get jostled a bit. But within several days, riding it made me a different person. It was a novelty, but it also took my mind off things. I had lost my trust in anyone.”

Vanita tells me that she used to have a family and she used to have a family car. “One had been living in that kind of illusion,” she tells me. Suddenly, she was left without anything. It was then that the Metro gained importance in her life. She got a Metro card. “Whether I use it or not, it’s a great psychological support for me. I’m someone who’s not been abroad. When you see the Metro, you think, my god, you seem to be in a foreign country. Indian trains are so different, grimy. The Metro is so different. You feel a very small portion of what it’s like in other countries.”

Vanita not only started taking the Metro to the college where she worked, but to Tis Hazari Court as well, which happened to be on the same line. By then she was involved in three cases against her husband and had to make regular trips to the court for proceedings.

“I could see it from the train,” she says, “My god, have I reached here? It was a wonder. It gave me a different angle on my life to see the court from there, and to be getting there by taking the Metro. My husband’s absence, earlier it used to disturb me, but not now.”

The headquarters of the Delhi Metro Rail Corporation (DMRC) are located in Metro Bhawan (Building) on Fire Brigade Lane off Barakhamba Road. It’s a radial road extending from Connaught Place, one of the city’s core commercial areas. The wide, shiny building anchors this area filled with office workers and looms over them. It’s far from being a skyscraper; it only has eight floors, but its exterior is made of concrete, steel, and glass and projects both industrialized modernity and corporate culture.

Once you cross the building’s manicured lawns in front, you pass through security, which, like getting on the Metro, includes multiple electronic security gates, searches, and ide 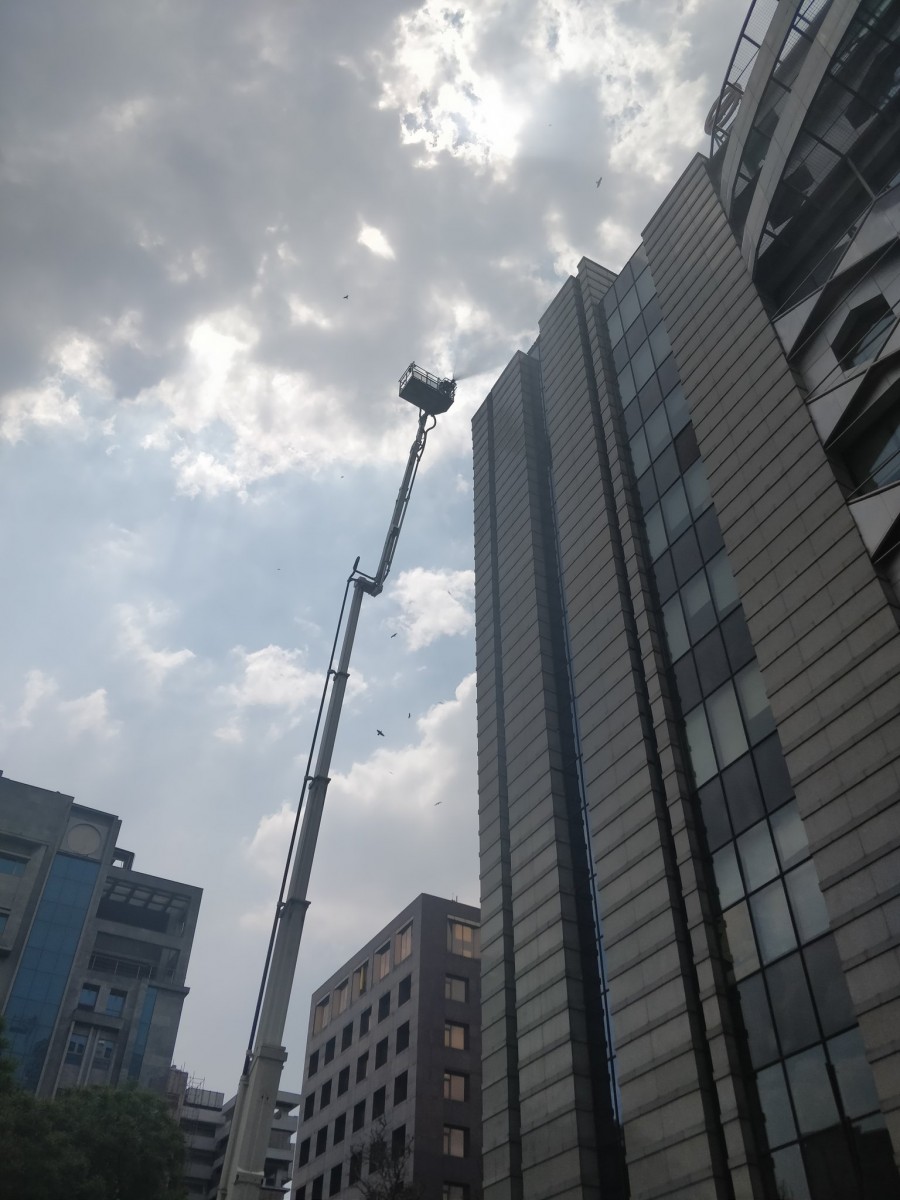 ntity protocols. The lobby by contrast is an empty, open space, with a light-filled atrium. Floor-to-sky ceilings create a dramatic entrance, with offices on multiple floors in the recesses of the building. The gray stone interior is warming, even as glass elevators move up and down the height of the building. Riding in one you feel like you are part of the technology.

Metro Bhawan relays a message of efficiency, cleanliness, order, and grandeur. It’s not meant for the public; it is a workplace. And yet it also introduces a new historical form to the city, a distillation of the new Metro system crisscrossing the city. It is an architecture that stands apart from the Mughal, colonial, and even postcolonial, with an exterior that suggests movement, even locomotion, via its gleaming, sun-reflecting surfaces, curved front, and diamond-shaped cut-outs. It does not blend into the surroundings but rather dominates them. The building is reflective of the Metro system rather than the city. And like the Metro system, Metro Bhawan marks out the idea and feeling of inside as outside and outside as inside, from its façade to its elevators. It is a headquarter building in the center of the city, yet one that symbolizes the myriad new connections the Metro forges between center and periphery, and the creation of new city centers in the form of interchange stations. Metro Bhawan’s disjuncture with its surroundings is not about postmodern fragmentation and dislocation, but rather a new centering that is imposed on the city, plonked down. For the good of the city, the DMRC would say.

Once inside I’m directed to the public relations office. Sushma, a senior officer, tells me that the Metro was required, otherwise “the city would collapse.” This idea of collapse, the city on the brink, is one that gets written into the origin story of the Metro across DMRC publications. Sushma chalks up the Metro’s success to three principles: leadership, guidance, and massive training sessions. Four thousand people work for the DMRC and go through a rigorous three-month training program. The project is built on public-private partnerships with some five hundred contractors. It is the cheapest metro ride in the world. A poster behind Sushma’s desk reads:

Sushma takes me into the office of Anuj Dayal, the chief spokesperson for the DMRC, the face of the organization after its project managers – first Elattuvalapil Sreedharan and then Mangu Singh. Dayal asks me what I want to know and where my questionnaires are. He is friendly, polite, and seemingly willing to help. When I ask him about the famed work culture and discipline of the organization, he invites me to witness one of the on-site yoga sessions at Metro Bhawan.

It’s a late-afternoon class with a dozen Metro officials in regulation slacks and cotton polo shirts and one yogi, a small taut man in a yellow kurta pajama. We are in an auditorium off the main lobby; they are all on the stage and I am in the audience of one. The yogi leads the class in Hindi through a number of sun salutations, seated asanas, pranayama, sivasana. Feet circle in the air, heads bob up and down. I feel relaxed just watching them.

Here in this sleek building in central Delhi it’s hard not to see this yoga practice, these familiar postures, as a kind of “postmodern transformation of culture.” This is yoga for a purpose, a kind of solution to the problem of the modern workplace and the very timings and pressures that the DMRC demands of its workers. The sticking to the clock. But the yoga also aims to be spiritual guidance: How will Indians build and run a world-class Metro? How will this city remain Indian with a Metro? How will people’s insides match the outside? The solutions almost seem to be in the poses themselves, ones that began in India, traveled the world, and then came back as global products for the body and spirit. The Metro and the yoga poses seem to have been destined to meet on this stage.

Rashmi Sadana is an associate professor of anthropology at George Mason University.