One can say with absolute certainty that he was the most loved and admired poet of his times. 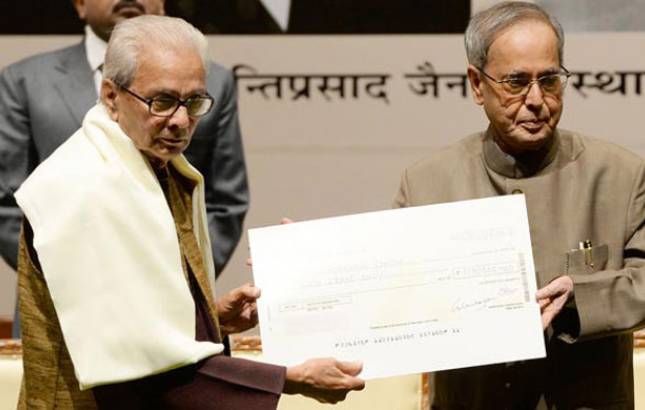 Kedarnath Singh’s tall stature as a poet somehow overshadowed his contribution as a literary and social critic. Credit: PTI

Death has not been able to put a full stop to his poetry. Although Kedarnath Singh passed away on Monday after a brief illness, his newest collection of poetry is yet to take birth. According to Ashok Maheshwari, chairman of the Rajkamal Prakashan Samooh that has published most of the celebrated poet’s books, the new collection will be brought out in a month or two.

In this collection titled Matdaan Kendra Pe Jhapki (A Snooze at the Polling Centre), Kedarnath Singh, in his inimitable style, turns a voter into a metaphor for the sleepy Indian democracy. This voter dozes off  at a polling booth and finds that he has lost his right to participate in the democratic exercise of voting, the only precious thing that a poor Indian possesses.

When he breathed his last at the age of 83, Kedarnath Singh was perhaps the only poet in the Hindi literary world whom hardly any important award had passed by. And, it was nothing short of a miracle that in a world infested with petty jealousies and cutthroat rivalries – writers are not immune to these traits –he remained an “Ajaatshatru” (one without enemies) and was the most loved, admired and adulated Hindi poet.

What was the secret behind his unusual, rather extraordinary, popularity? It can be summed up in just one word: simplicity.

Born in an ordinary peasant family in Chakia village of Ballia district in Uttar Pradesh on July 7, 1934, Singh always remained true to his roots. After receiving his initial education in his village, he shifted to Benaras (Varanasi now) where he did his M.A. and Ph.D. in Hindi language and literature at the Banaras Hindu University and struck lifelong friendships with people like Namwar Singh, Trilochan Shastri, Vijay Mohan Singh and B.V. Karanth. In Hazariprasad Dwivedi, he found a guru who was not only a great scholar but also a great novelist whose novels remain in a category of their own. 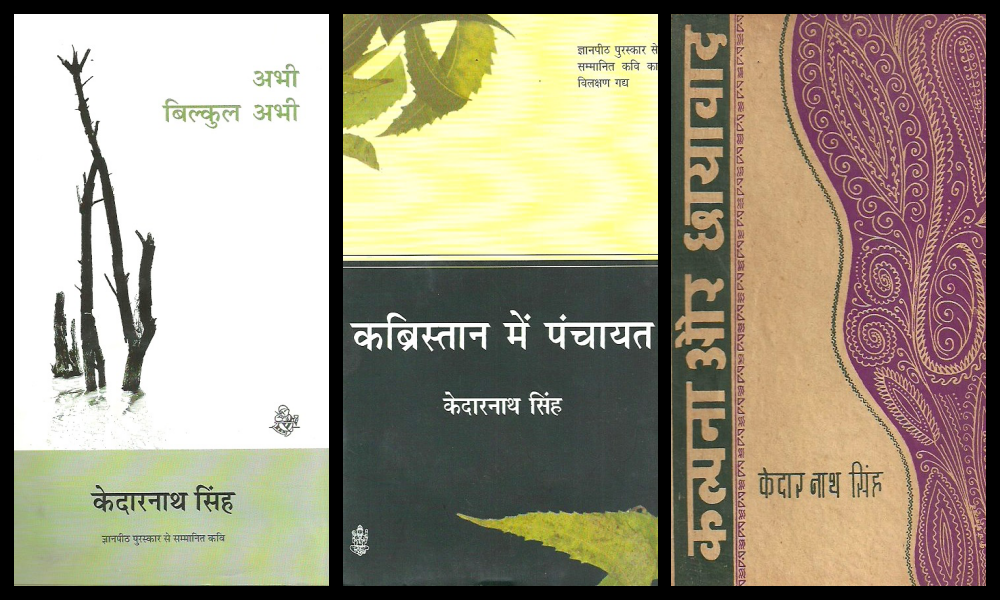 The covers of Abhi Bilkul Abhi, Kabristan Mein Panchayat and Kalpana Our Chhayavad.

While his village gave him simplicity and rustic ruggedness, Benaras bestowed upon him urbane refinement and a broad perspective. Market is the age-old enemy of a peasant as, dominated by middlemen, it deprives him of the real value of his agricultural produce. In the poem “Ek Chhota-sa Anurodh” (Just a Small Request), he dreams of a situation where it would be possible to acquaint ourselves with rice, salt and pudina (mint) without the mediation of the market.

Singh began to write lyrics when he was in his late teens. That was the time when even Namwar Singh, who later emerged as one of the most famous literary critics in Hindi, was writing lyrical poetry and Shambhunath Singh was a very popular lyricist at the poetic soirees. According to his own admission, Singh became familiar with Nayee Kavita (New Poetry) when he began reading Taar Saptak (The Heptad), a collection of seven poets edited by Sachchidananth Hiranand Vatsyayan ‘Agyeya’. This, as well as its two sequels Doosara Saptak (The Second Heptad) and Teesara Saptak (The Third Heptad), proved to be historic milestones in the long journey of Hindi poetry. Taar Saptak was published in 1943 and included, besides editor ‘Agyeya’, Gajanan Madhav ‘Muktibodh’, Nemichandra (Jain), Bharat Bhushan Agrawal, Prabhakar Machwe, Girija Kumar Mathur and Ramvilas Sharma.

When ‘Agyeya’ invited poems from him for Teesara Saptak (1966), Kedarnath Singh was understandably elated and described it later as a “decisive turn”. It established him in the constellation of notable poets of his time and there was no looking back after that. However, his poetry gradually became less lyrical and more realistic. After the armed peasant movement that originated at Naxalbari shook the nation’s political life, a strong leftwing poetic movement began to take shape in Hindi as well as other Indian languages. A new crop of young poets came up in Hindi who wrote passionately about the people, their problems and their revolutionary solutions. The changing political and literary situation left a deep impression on Kedar Nath Singh and his poetry too began to make a noticeably pronounced pro-people shift.

His appointment as associate professor in the Centre of Indian Languages at Jawaharlal Nehru University (JNU) in 1976 too had a deep impact on his life and work and his pro-Left outlook was reinforced. He headed the CIL for many years and retired as professor. When Hindi writers took the lead to protest against growing intolerance in the country and began returning their awards, Singh lent his voice in their support. Two years ago, when JNU came under state-supported Hindutva attacks, he issued public statements in support of the students and the liberal academic culture of the university. As a teacher, he was second to none and explained poetry in an incredibly simple yet profound manner, helping his students evolve an insight into how poetry works, creates its unique magic and dazzles the reader with its brilliance.

Kedarnath Singh slowly acquired an all-India stature which was further enhanced when he received the first Kumaran Asan award in 1980. Later, many awards including the Sahitya Akademi, Sharad Samman, Vyas Samman, Ramdhari Singh Dinkar Samman and Jnanpith award came to him and he was universally acknowledged as one of the most significant Hindi poets of his times.

One can never say how posterity will treat him and how future generations will view his contribution, but one can say with absolute certainty that he was the most loved and admired poet of his times. As we know, at any given moment, at least three generations of writers co-exist and it is no mean achievement if a poet is so greatly admired by all his contemporaries.

Abhi Bilkul Abhi (Now, Just Now), Zameen Pak Rahi Hai (The Earth is Becoming Ripe), Tolstoy Aur Cycle (Tolstoy and Cycle), Srishti Par Pahara (Vigil On the Universe) and Baagh (Tiger) are some of his noteworthy poetry collections and will be greedily read for many decades by lovers of poetry. 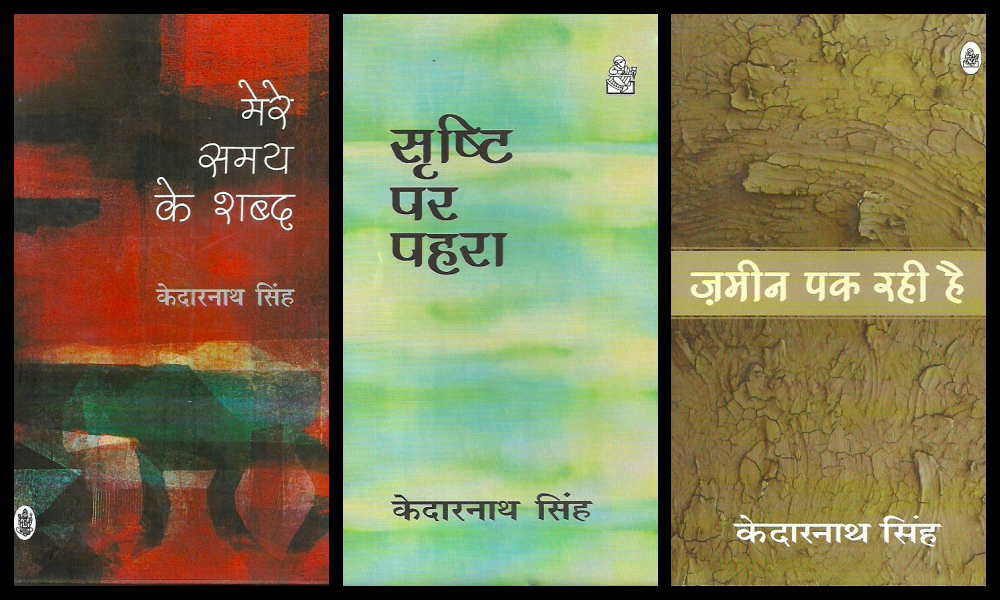 Kedarnath Singh’s tall stature as a poet somehow overshadowed his contribution as a literary and social critic. If one reads his M.A. dissertation Kalpana Aur Chhayavad (Imagination and Chhayavad) and his Ph.D. thesis Aadhunik Hindi Kavita Mein Bimbvidhan (Imagery in Modern Hindi Poetry), one is struck by the originality of his thought and depth of his understanding. His essays compiled in Kabristan Mein Panchayat (Panchayat at a Graveyard) and Mere Samay Ke Shabad (Words of My Times) offer a panoramic view of his interests, perceptive observations and comments on the contemporary social, political and cultural happenings, and a deep involvement with his times and society. He questions the use of the word Madhya Asia (Central Asia) and recalls that Indians always knew this area by the names of individual countries and not by this name given to it by colonialists.

Similarly, in an essay, he observes how the Left Front government in West Bengal under chief minister Buddhadeb Bhattacharjee had begun shedding its sectarian approach and recognised the contribution of an adversary like Sunil Gangopadhyay’s by appointing him the sheriff of Kolkata.

This writer had the good fortune to have known Kedarnath Singh both as a friend as well as a teacher. His personality in both these roles was simply enchanting, captivating and even mesmerising. Those who knew him were truly blessed.