The Winter of No WiFi – 'Brothers of the Gun: A Memoir of the Syrian War'

A memoir of Marwan Hisham, co-written and illustrated by Molly Crabapple, tells a radically relatable story of youthful defiance and laptops in the capital of the Islamic State.

Crabapple's illustrations render photographs secretly shot on phones by Hisham and other Syrians inside the warzone. 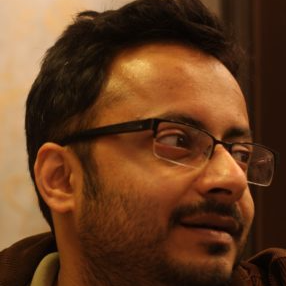 I remember the evening I thought I saw the Revolution: Live on TV, in the comfort of my living room. Watching and sipping a soft drink, I saw men with bright hope in their faces and Coca-Cola in their eyes (in times of change, the drink is a multinational solution to the very local effects of tear gas). I was convinced the Jasmine Revolution and the Arab Springs were going to making new maps. It turned to be a different story. 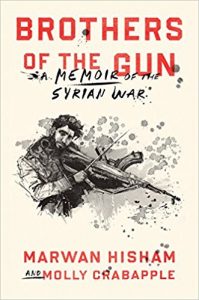 Brothers of the Gun: A Memoir of the Syrian War
Marwan Hisham and Molly Crabapple
One World, 2018

Brothers of the Gun: A Memoir of the Syrian War is a chronicle of that story. It is the story of Marwan Hisham – one of the book’s co-authors, along with the artist and journalist Molly Crabapple – who joined the passionate protests against the dictatorship of Bashar al Assad, convinced of change at one moment, and scattered in the next.

“I was hungry for it,” Hisham writes, considering the fate of their uprising. “Each time I marched, each time my eyes burned from tear gas, each time I shouted curses at the snitch-filled Baathist Student Union, each time I heard the crack of bullets, I killed the fear and the stagnation that my jailers had imposed on me.”

What began as protests became a playground of shifting goal posts, then darkened into a no-man’s-land of religion, radicalisation and rage. The young men spend the best years of their lives coming to terms with the everchanging landscape, new orders of faith and following and a struggle to stay relevant – and eventually, to stay alive.

One of Hisham’s comrades becomes an Islamist fighter; another a killer, until he is killed, and Hisham himself becomes a journalist, filing stories for the international media from ground zero in Raqqa, deemed the capital of the ISIS caliphate. Many Syrians had neither the time to remember nor the time to witness, for they had to flee. Hisham stayed back, moving deeper and deeper into the seized territories, observing both in silence and forced obeisance, digging out stories from the rubble.

If you’ve read of this before, this book is more. It is also about enterprise in times of bare survival, and information in the times of isolation. Hisham turns entrepreneur, hooking up a satellite dish and opening an internet café, unfolding the most extraordinary theme of the book: war in an age when the hunger for information surpasses the hunger for food. A café that provided an outlet for information brings together civilians, rebels, ISIS brothers from Holland and Chechnya, all under one roof. The fight for megabytes is everyone’s respite from the fight for territory, while the author is a mute spectator counting cash over the table and making notes under it. An illustration from the book, by Molly Crabapple.

In the hours of oblivion he did the obvious – smoked cigarettes and filed stories for the international press, both acts forbidden under the imposed regime. In the middle of bombings, torture and war, a story that is radically relatable: the effort to reach the world over Twitter, borrowed iPhones and faltering WiFi. 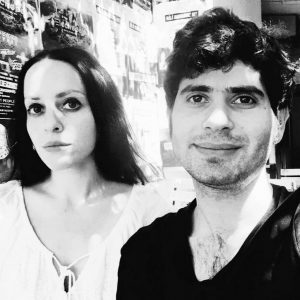 Here is the account of a real insider, whose stories come to life with the raw, energetic art of Molly Crabapple. What began as a furtive online exchange (‘the art crime’), with Crabapple reprocessing photos shot on Hisham’s phone, became a deeply involved process, more as co-creators than a writer-illustrator duo. The drawings remain most intriguing because of this process, of seeking access to a hidden subject – using images and citizens’ videos from the net.

They are close eyewitness accounts of eyes that were never supposed to be looking. They capture injured rebels in their bandages hooked to their smartphones, a young boy barely managing to hang onto his AK, and the final journey of a loved one. Each poignant, black-and-white rendering reveals the duo’s turmoil and struggle to avoid the usual clichés and yet depict the urgency of a mute observer. Sometimes it feels as if their sketchbook might have been the last paper document of that land.

This isn’t just a rare book, but also a real one. It is not the notes of a journalist but of a hardened survivor, one who stuck it out for the experience, in his own words, of ‘what I could have avoided but I dared not’. Brothers of the Gun is a heroic effort to weave the tapestry of a saga still unfinished, and yet to be made sense of.

Vishwajyoti Ghosh is a graphic novelist and the author of Delhi Calm and Times New Roman & Countrymen. He curated This Side That Side, an anthology on Partition with graphic narratives from India, Pakistan and Bangladesh.