Book Review: What Ails The IAS And Why It Fails To Deliver

NC Saxena's book paints a portrait of how India's bureaucracy has failed to serve its poorest and most marginalized citizens well. In the last decade, many civil servants have written about their experiences in the civil service and how the development process has evolved in the country. This latest addition by Dr Naresh Chandra Saxena, a former secretary to government of India, takes a hard look at why the IAS has not been able to provide the quality of public service expected of an elite civil service. As an insider, the book is an introspection of the many areas of failure of the civil service, reasons for the gap, and some critical reforms needed to improve the delivery of services, especially to the poor and marginalised.

While India has done well in developing physical infrastructure, especially after the reforms, it is the pace of progress in the social sector which has lagged behind. India is lagging behind even Bangladesh and Vietnam in reducing infant mortality, malnourished stunted children, access to sanitation in rural areas and attendance ratio of girls to boys in the school.Though poverty has declined, it is still higher than China, there is extreme hunger in the poor whose cereal consumption is inadequate and farmer’s distress is leading to suicides. While India has expanded its primary school network,learning levels continue to be poor. Also, 16% of the children in 6-14 age group are out of school according to NSSO data. A recent United Nations report shows India lagging behind in improving its average years of schooling. It has gone up only marginally from 4.4 years to 5.4 years against targeted 11.7 years. Income inequality has been rising especially after the economic reforms and inter-state income gaps has not declined, giving rise to worries of social tensions. The civil service which is in key positions must share the blame for it according to the author. 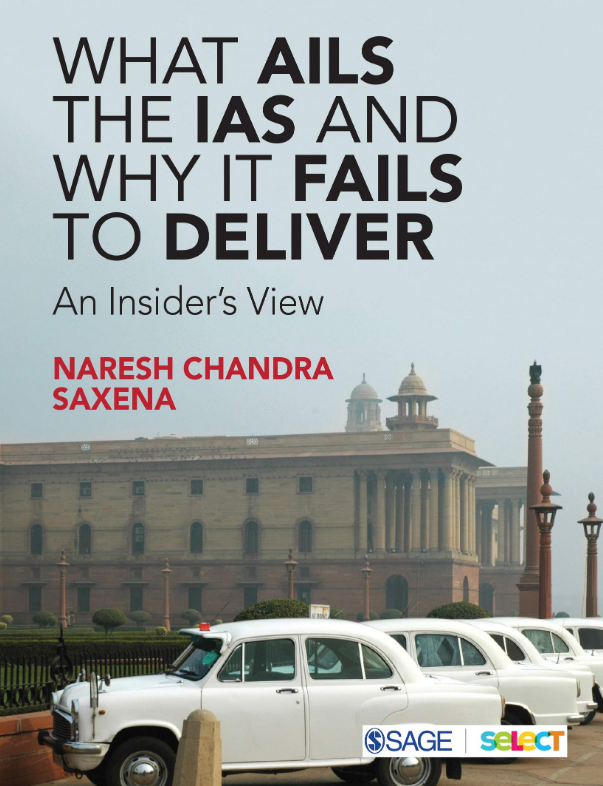 The bureaucracy is also not fair to the marginalized groups and the poor. The author gives several examples of this neglect. First, the process of identification of the poorest families has left out many. While the labour survey showed 5% entitled to automatic inclusion, the actual number identified were 3.8%. A survey done in 2015 also excluded many poor families as subsequent review showed. Also, the Dalits, Muslims, women and the tribals have not benefited from India’s high rate of economic growth. The book analyses extensively the inequities in development flowing to these sections. It talks of discrimination against Dalits, ignoring the needs of the tribals, poor education and social indicators among Muslims and discrimination against women. It quotes the Hashimpura report to illustrate the point of bias against Muslims. It mentions the patriarchy prevalent in our society, discrimination against women in access to agricultural land and author’s initiative in NAC to get the law of succession changed to get them their legitimate due. The work participation rate of women has been going down continuously and was (2011-12) only 26% for females as against 84% for males.

The book clearly is strong on Dr Saxena’s (NC to most of his colleagues) commitment for the poor, the marginalized and other groups against whom there is bias in our society. He is strongly committed to an honest civil service and it is evident from many instances of policy decision quoted by him. As Revenue Secretary, Government of UP, he issued many directions to help the poor. He also tried to amend the land laws in UP so that persons who had acquired land of tribals illegally could be evicted by an executive act without going through a lengthy legal process.

In fact he ensured presence of para-military forces in the Terai region to provide protection and effective execution of the law. He was finally overruled by Delhi. His other initiative to get surplus land for distributing to the poor came a cropper too when his initial effort to collect data itself to frame a policy was reported in the press and met with a strong political opposition. He was however successful in getting a new Forest Policy passed in 1988 which focused on protecting forests and providing tribals rights for use of minor forest produce. When writing the mid-term appraisal of the Ninth Five Year Plan, he was highly critical of the performance of the Government. The PM Vajpayee was very unhappy with this. But NC did not change the draft which was later adopted by the NDC, a body which included CMs of states. On another occasion he opposed the grant of funds to Swadeshi Jagran Manch as it was not within the ambit of rules. He was transferred forthwith as a result and sent to the Planning Commission.

It has been argued that political leadership can make enormous difference to the functioning of bureaucracy. The case of Bihar has been considered in depth by the author. While Lalu Prasad Yadav was the Chief Minister, the rate of economic growth was low. With the change of government, Nitish Kumar took over. The growth parameters improved considerably. NC gives example of improved performance in the road and electricity sector as officers got support in development initiatives.

The author identifies several reasons for IAS officers not being able to deliver and suggests a range of systemic reforms. He argues that India has a very low tax base which has prevented adequate investment in social sectors. Several laws are archaic and especially the land laws need substantial reforms.The budget procedures are dilatory and poor states are often not able to spend even the meagre funds due to shortage of staff. Funds are not released in time even for the salaries of workers in several cases.The tribal issues are not dealt with by the department fully. The author also argues for better design of pro poor programmes and identifies major gaps in ICDS, NREGA and PDS.

The reforms needed suggested by the author are wide ranging. He argues that tenure of officers should be fixed. With short tenures neither is it possible to plan any improvement nor is there any accountability. There is often a lack of domain knowledge. In many officers there is little concern for the poor. Both these gaps must be plugged. There is a need for better monitoring and information system where no fudging of data may be possible. The absenteeism of officials needs to be monitored .The focus should be on outcomes rather than inputs.  The author suggests accountability of civil servants with citizen’s having an oversight role, greater transparency and strong external pressures to ensure that there is no flouting of rules and corruption is minimal.

The book is full of anecdotes, written without jargon and extremely interesting for readers across the cross section of society. It has excellently analysed development in the social sector and the need for a more involved civil service in undertaking development programmes for the marginalized section of our society. The book is a very valuable addition to the field of governance reforms.