N.S. Vinodh's 'A Forgotten Ambassador in Cairo: The Life and Times of Syud Hossain' is about a man who played an important – if supporting – role in the independence struggle. 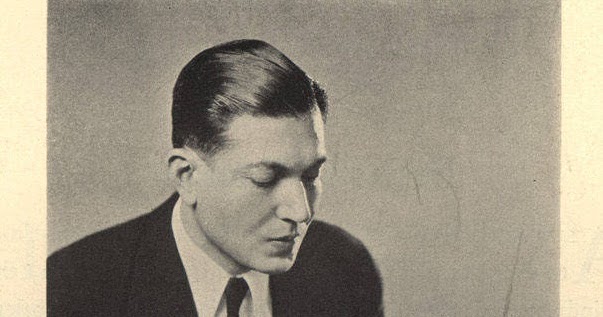 In group photographs with prominent people, there are always several persons who stand in the background, captured in the same frame as the great leaders, but who themselves remain unnamed and unknown. They are familiar only to close friends or family members who proudly point to their picture and mention their brief connection with major movers of history.

N.S. Vinodh’s A Forgotten Ambassador in Cairo: The Life and Times of Syud Hossain is the biography of one such person – Syud Hossain (yes, that is how he spelt his name) – who, in his lifetime, was closely associated with Gandhiji, Motilal and Jawaharlal Nehru, Jinnah and Sarojini Naidu, and was also very briefly married to Vijayalakshmi Pandit, Nehru’s sister, later ambassador to Russia, the US and the UK, and governor of Maharashtra.

And, yes, the book has a photograph of Hossain at the 1919 Congress session in Amritsar with stalwarts of the day – Tilak, Motilal Nehru, Annie Besant and Pandit Madan Mohan Malaviya; another with Kahlil Gibran from 1925, and still another from 1938 with Subhash Chandra Bose and Sarojini Naidu. But, without this biography, Hossain would have remained a mystery for most of us, even for devout students of the freedom struggle in which he was an active role-player, albeit in the UK and US.

Born in 1888 and having a nawabi background from both his parents, with one side from Dhaka and the other from Calcutta, Hossain emerges as a handsome, attractive, urbane, sophisticated and even a romantic figure, at ease at the highest levels of Indian and Western society. In 1907, an early mentor described him as “one of the best scholars of English that the Calcutta University has produced”. He wrote regularly for The Statesman, which then had Benjamin Guy Horniman (1873-1948) as its assistant editor. They established a lifelong friendship and went on to collaborate in promoting the cause of India’s freedom through diverse newspapers. 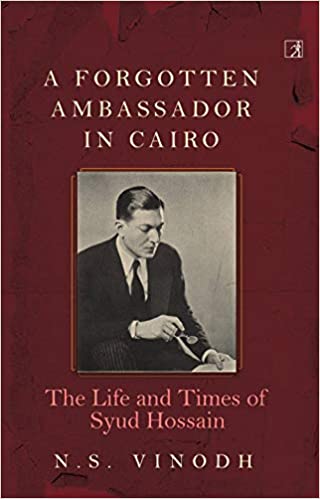 N.S. Vinodh
A Forgotten Ambassador in Cairo: The Life and Times of Syud Hossain
Simon and Schuster, 2021

After a short stint in local government service, Hossain enrolled at Lincoln’s Inn, London, in 1910, and joined the National Liberal Club where he became close friends with prominent British liberals such as H.G. Wells, Bernard Shaw and G.K. Chesterton. But those closest to him were the poetess, Sarojini Naidu, and Asaf Ali, later India’s ambassador to the US, governor of Orissa and ambassador to Switzerland. Naidu, India’s “nightingale”, corresponded with Hossain from 1914 to 1947, with her letters redolent with deep affection, embellished frequently with her poems.

Hossain returned to India in November 1916 and quickly began a career as a political journalist at the Bombay Chronicle as deputy to Horniman. Here, Hossain’s passion for writing supported his passion for India’s freedom. In Bombay, he came close to Gandhiji and, as the author says, he became “a life-long supporter of Gandhi and his philosophy”. Besides being a writer, Hossain was also a political activist as a member of the Congress and of Annie Besant’s Home Rule League. Besant selected him to go to London to plead for “Home Rule” for India, but the trip was cut short at Gibraltar, where Hossain was detained and then deported back to India.

In January 1919, Motilal Nehru recruited Hossain as the editor of his new newspaper, The Independent, to be published from Allahabad. As Hossain took charge of his new responsibility, Gandhiji advised him: “May I further hope that to a robust independence you will add an equal measure of self-restraint and the strictest adherence to truth?” Great lesson for our times, as well!

The year 1919 was when the harsh Rowlatt Act was enforced by the British government in Punjab, followed by the Jallianwala Bagh massacre. Hossain’s paper emerged as a sharp critic of the government and became so popular that it “had the largest circulation of any daily newspaper in Northern India” and “exceeded the combined circulation of its main competitors, The Pioneer, The Leader, and The Indian Daily Telegraph”.

This Allahabad stint produced an ill-fated romance that shaped Hossain’s subsequent career and possibly erased him permanently from the annals of Indian history. Motilal’s daughter, then 19-year old Sarup Kumari (later Vijayalakshmi Pandit) and Hossain, 12 years her senior, fell in love, eloped and got married as per Muslim rites.

Under combined pressure from Motilal and Gandhiji, the couple was forced to annul their marriage. In fact, Gandhiji personally admonished the couple. Hossain, already scheduled to leave for London to plead the cause of the Khilafat movement, was hurriedly sent off to the UK, while Sarup Kumari was sent to Sabarmati ashram for six months “to purify her mind and soul”.

The author has quoted two delightful letters in which Sarup has spoken about her experiences at the ashram. She describes it as “so utterly drab and so unpleasing” – waking up at 4 am, cleaning out the living quarters, washing in the river, while the menu was such as to “to kill one’s desire for food”.

Later, on her return home, Sarup gave her friend Padmaja Naidu, Sarojini Naidu’s daughter, an irreverent account about how Gandhiji personally chastised her for her behaviour and explained how she should have conducted herself. The young love-lorn lady concludes: “But then, if I started telling you the good Mahatmaji’s objections I should fill a few hundred pages.”

Hossain left for the UK in 1920 and did not return to India till 1946. His entire role in the cause of India’s freedom was played out in Britain and later in the US. Thus, he missed out on all the significant events that shaped India’s destiny – the non-cooperation movement, the rise of the Muslim League and the agitation for Pakistan led by his old friend, Mohammed Ali Jinnah, the Quit India Movement, the interim government headed by Nehru, and finally independence, accompanied, heartbreakingly for Hossain, by the partition of the country on communal basis.

The author provides over 200 pages the details of Hossain’s active role in the national cause as a journalist and speaker. He was editor of the nationalist paper, India, in London for a while. Hossain then left London in October 1921 to start a fresh career in the United States. The author describes the uncertainty surrounding his new circumstances thus: “A pungent pen, a pugnacious eloquence, a stubborn patriotism, and an admiration for Gandhi had been his life’s anchors. As he worried about his future, an icy blast from the ocean added to his trepidation … and his melancholy.”

Hossain was in the US from 1921 to 1946. Initially, for two years he wrote extensively and gave lectures across the US on India’s claims for freedom. The organisers of his lecture tours described him as a “disciple of Gandhi” and as being “full of fire and magnetism and a delivery that is as melodious as convincing”. A newspaper said Hossain “looked like Rodolf Valentino, sensitized, intellectualized and just as youthful in spite of his long years before the public”.

Then, in 1924-28, he was the editor of The New Orient that sought to harmonise the cultures of the East and West. The issues he edited had contributions from Gandhiji, Einstein, Horniman, Kahlil Gibran, Bertrand Russell, HG Wells, Sarojini Naidu and CF Andrews. His next career move was to give lectures at summer sessions of the University of Southern California on Indian and Islamic civilisations in 1934-43. The university newsletter described these lectures as “among the most popular” and “expected to have a large enrolment”.

Watch: Even Gandhi’s Enemies and Critics Cannot Do Without Him

After this, till 1946, Hossain was directly involved with promoting the cause of India’s freedom as the head of the Washington-based “National Committee for Indian Independence” (NCIF). Here he was both an activist and a journalist: he edited the Voice of India, described in the book as “the most influential magazine of the Indian nationalists in the years leading to Indian independence”.

His wide contacts in India and the US ensured that the paper received contributions from Gandhi, Nehru, Maulana Azad, Vijayalakshmi Pandit and several American dignitaries. Hossain’s position with the NCIF also enabled him to escort Vijayalakshmi Pandit when she came to the US in 1945-46 on a year-long speaking tour.

At this point, Hossain felt the need to return to India. He wrote to Nehru for advice but got a lukewarm reply: Nehru referred to Hossain’s long stint abroad and quoted Gandhiji as recommending that “you can do more important work in America”. The author has quoted M.O. Mathai, Nehru’s secretary, as saying that Gandhiji’s “shrewd advice” was to prevent the revival of gossip mills “impairing Vijaya Lakshmi’s usefulness”. The love affair of nearly 30 years ago had obviously not been forgotten by either Gandhiji or Nehru!

Hossain got back to India despite the misgivings of India’s stalwarts, but this was a bitter homecoming. Hossain had little understanding of how much India had changed. Soon after he reached Delhi, he called his old friend Jinnah, only to be rebuked as a member of the “enemy camp”. Jinnah appears to have apologised later, preventing Hossain from sending the letter he had drafted in which he had told his friend “that even when you become President of Pakistan, I hope you will remember to be a gentleman”. A close friend said of Hossain after his death that he was “a bit of a misfit in post-1921 India”.

Hossain was nominated as free India’s first ambassador to Egypt, where he hosted both Nehru and Vijayalakshmi Pandit. He occupied this post for just a year, and died in February 1949. He was buried in Cairo’s “City of the Dead”, with its thousands of tombs and home to half a million residents. A beautiful tomb has been erected for the departed writer, orator, activist and diplomat by the Indian government. The author reports that in later years, Vijayalakshmi Pandit would stop periodically in Cairo and “spend a few hours at the tomb”.

This is the story of a footnote in India’s freedom struggle that has been given breath and life by an excellent writer. The author, N.S. Vinodh, has been a student of engineering and management, has been successful in real estate and corporate finance, and took early retirement to run his own small company and, rare among corporate honchos, opted to pursue his love of history and travel. This book is both a labour of love and an outstanding piece of painstaking research – a reflection of the author’s wide travel, his commitment to the book project, his dogged pursuit of source material, his clarity of thought, and, above all, his lucid style.

Also read: Lessons from the Chozha Dynasty for Our Democracy in Decay

The book is a valuable reminder that all leaders in the forefront of the freedom struggle had dedicated supporters who contributed to the national cause fearlessly and with total commitment – but often anonymously. It is a joy when their stories are brought to public attention.

A piquant thought: if Hossain had not been in exile throughout the freedom struggle, with his charisma and commitment to the national cause, his writing skills and oratory, and his friends at the highest levels, could he not have been at the top echelons of the movement, robustly serving the cause of united India against the likes of Jinnah and Liaquat Ali?

May I end on a personal note? About 40 years ago, I held the modest post of Under Secretary (Property) in the Ministry of External Affairs, being responsible for the rent, purchase, construction and repair of our properties abroad. Once I received a request from our embassy in Cairo for funds to repair the tomb of our first ambassador, Syud Hossain. I recall I could get the usually tight-fisted “Finance” to approve the money required. In this book, the author has complained that the tomb is in poor condition. Perhaps, the embassy in Cairo could make a similar proposal to my present-day successor!