Book Review: The Instinct of Remembering

Arundhathi Subramaniam's 'Love Without a Story' is a signature combination of finesse and largesse. When Booker Prize winner Julian Barnes wrote his unforgettable novel on love, he chose to call it The Only Story, reiterating the popular belief that the only story that matters is love or about love. But when a poet, upholding the art of reductionism, compresses her story, or the way she sees it, she chooses to name it Love Without a Story, “the oldest thing in the world”, as if to assert that the paraphernalia surrounding love doesn’t matter.

When you subtract the story from love, love still remains – with all its purity and poetry. Feeling it requires a sensitivity of the kind pervading the hearts of hermits, and expressing it entails precision that peels the façade of language and reveals the sanctum where realisation sprouts, grows and, ultimately, flowers. You know that it’s exactly this hard-won realisation that a seasoned poet is dealing with when she tells you that love

. . . evicts you
from the land of echoes
you thought was home

and leads you to
friends 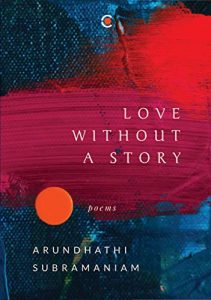 Eviction is the best gift a land teeming with “echoes” can give, because not all of these echoes, these derivative voices, arose from your own shout. Returning to the source of the shout, you turn back to “friends” who were always there, and who are more than what “you thought was home”. In fact, it was to them you had called out in the first place, but then forgot about it when the quiet, both without and within, deepened after the very basis of love, and what was expected of it, shifted.

In poem after well-tempered poem, Arundhathi Subramaniam chronicles this shift:

not worrying too much about
. . . names
and plots,

knowing there is never
a single point
to any story

The book is a celebration of the freedom the poet has conferred upon herself – freedom from the need to impress a universe where “uni” is fast being turned into the defining prefix of the times. She is convinced that it is not just possible but also enough:

to decant quietly
into some dawn,
leaving behind
a smudge,

then perhaps nothing at all.

The “smudge” in the above lines calls to mind the interesting use of “sludge” in one of the most striking poems in the collection, Mitti:

until I figured that the moon
was a likely mud-gazer

longing for the thick sludge
of gravity

That Subramaniam, delighting in “the irrepressible human love / of naming”, chooses the Hindi word mitti as the poem’s title shows her obsession with poetic precision. There is something in mitti that mud leaves out: through connotation arising from sound, mitti also carries the possibility of taking us to the infinitive mitna (to be erased), thereby extending the poem’s courtyard and pouring more light into it. Mitti, which itself derives from the Sanskrit mrittika, contains mitna (erasure). The word mrityu (death) has its origin in mrittika. For Subramaniam, “sound meets scent” only in “mitti”. “Just that,” in her own words. “Nothing else will do.”

Also Read: A Riveting Mix of Poetry and Politics

Talking of the gravitational pull between celestial and terrestrial bodies, Krishna Mohan Jha, in one of his poems in Hindi, writes (my translation):

This is how two contemporary poets who have never read each other, and who write in different languages, deal with a similar emotion – in this case, lunar empathy – strewing stardust from the galaxy called Serendipity on the crisscrossing paths that a reader straying between languages might traverse.

In another memorable poem, Subramaniam does an E.E. Cummings, recalling how she and her friends

Proper nouns belonging to the greats do become “common nouns” in the collective space that the stalwarts leave behind for their creative heirs to occupy. Her putting “kolatkar” before “pound”, and even “nammalvar”, is not accidental. After all, in Arvind Krishna Mehrotra’s words, Arun Kolatkar “is among the finest English language Indian poets of the last century”. The language used in the book is free from ornamentation, the lines terse, and the stanzas compact as matchboxes. Her intimacy with words which “are juicier still / than others” is natural, yet she doesn’t hesitate to accept that “the knots” are yet to “come undone” and is unafraid to “be adjective” in a world where “the verb is all.”

Her skill with line breaks becomes evident from the very first poem, which begins:

was for cabbages
until I found

that beneath their smoking
empires of sulphur

there lay a shiver
of doubt

The first line, syntactically complete, not only builds interest but also sets up the rhythm that energises all the other two-line stanzas in the poem, culminating in a one-line stanza, but the real magic lies in the enjambments between lines 5 and 6 and between lines 7 and 8. The antecedent of the pronoun “their” isn’t immediately clear in line 5, and “smoking” might well be construed as a gerund, evoking the image of poets smoking. It’s only when we move to the word “sulphur” in line 6 that the real noun (“cabbages”) behind “their” comes to the fore, thereby revealing that “smoking” is a participle. The enjambment between lines 7 and 8 gives us the imagistic “there lay a shiver”, which the familiar “shiver of doubt” cannot.

Subramaniam is also adept at wordplay (“She knows the ageing ustad / is eventually ousted”; “there’s nothing perma / about frost”), satire (“Now I meet poets / who exchange visiting cards, / . . . their poems cool seashells”) and axiomatisation (“It’s not the mind. / It’s the body / that grows parochial”). In her poetry, craft neither mutes voice nor interferes with the expression of beauty. In fact, she has such control over voice that she can as well turn into an able ventriloquist, as she does for the legendary Tamil poet Avvaiyar – the name “probably accorded to more than one poet in the canon” – in the brilliant seven-part poem ‘The Fine Art of Ageing’, an effective antidote to narcissism and

the danger years of stickiness
no one warns you of

No wonder we find her naturally attuned to

. . . the fellowship
of those who stand aslant,

“Fellowship”, whether with peers, parents, friends, or even strangers, is the defining strain of her philosophy. It isn’t a surprise that she chooses the twig-woven fragility of “a sparrow’s nest” over the topical relevance of the “newspaper”. She says:

Many lines in this book make remembering “an instinct”. When one of India’s finest lyric poets offers her signature combination of finesse and largesse, one can trust that to happen.

Sarabjeet Garcha is a bilingual poet and the author of A Clock in the Far Past, among other books of poems and translations.