Book Review: A Gentle Stroke to Reduce the Distance Between Oppressor and Oppressed

The central characters of 'Land Lust' are black Kenyans, living under a regime that dehumanises – but who themselves are never dehumanised in Joginder Paul’s writing.

Issues like the history of colonialism and the equations between colonisers and the colonised are told without taking away the agency of Kenyans. Photo: Oxfam East Africa/Flickr (CC BY 2.0)

In Counterpoint, his funeral dirge for Edward Said, the Palestinian poet Mahmoud Darwish observed: “No victim asks his executioner: if I were you and my sword greater than my rose … would I have acted as you had done?”

Darwish recognised that it was for the writer to pose that hypothetical, to reverse the relationship between oppressor and oppressed, and ask whether power – and its abuse – were universal facets of the human condition.

History, of course, provides its own, unambiguous answer to the question. Soon after the Scottish Highlanders were brutally evicted from their homes by English armies, in an infamous process known as the ‘Highland Clearances’, many of them travelled to the ‘New World’ as ‘pioneers’ and did exactly the same to the indigenous tribes – often using the same epithets (like “savages” and “uncivilised”) that they had been lately subjected to. It did not even take a generation for the victims to transform themselves into the executioners, and act as they had done – upon another set of victims. Examples of this kind are legion.

Land Lust (originally Dharti ka kaal, 1961) – a singular and remarkable book of short stories – asks the question that Darwish’s victim can’t – or doesn’t, but which history answers in any case. Its author, Joginder Paul, knew a thing or two about reversals of fortune.

Also read: Caste Wasn’t a British Construct – and Anyone Who Studies History Should Know That

Born in Sialkot in 1925, Paul migrated to India at the time of independence, and soon afterwards to Kenya, which was not yet independent. A schoolteacher in Kenya, Paul found himself in an uncertain place, the member of a recently-liberated colonised people, among people who had not yet managed to throw off the British yoke. And there, he also found not only the reproduction of colonial hierarchies that had characterised life in British India, but the willing – and at times even enthusiastic – participation of Indians in maintaining and perpetuating those hierarchies.

Land Lust – to borrow from the epigraph to a very different book, is “neither an accusation or a confession.” Paul’s writing has been described as “gentle” in other contexts, and Land Lust is a gentle book. Its central characters are black Kenyans, living under a regime that dehumanises – but who themselves are never dehumanised in Paul’s writing.

For example, in ‘Miracle’ – the opening story of the collection – the hierarchies of power between the Kenyans, and the Indians and English, are exemplified by the latter throwing coins into a quicksand-lake, hoping that the Kenyan boys will provide a spectacle by performing a highly dangerous dive to retrieve it, in the hope of keeping the money. A more unsubtle writer would then write the dive, having it end in tragedy – or a “miracle” – depending on the reaction they would want to elicit from their readers. Paul, however, is unwilling to divest his characters of agency so easily, even as he is unsparing about describing the racism and oppression. His story, therefore, ends on a more ambiguous note.

Paul’s approach is aptly summarised in a 1959 foreward by the progressive writer Krishan Chander, which is appended to the beginning of the book.

“Paul,” he writes, “stops and looks; he too entertains and walks away but even after his going away, we keep relishing his short stories because the scene he presents to us is not superficial like in many other cases. His stories present several layers of meaning which he slowly unfolds and seems to find joy in doing so again and again.”

More specifically, the violence of colonialism in Paul’s stories does not hit us on the nose, but is presented obliquely, and in a manner that allows the space for Darwish’s victims to speak, and not just be spoken of or to. 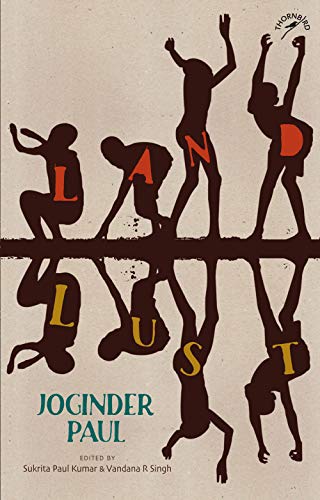 Perhaps nowhere is this clearer – or more moving – than in ‘Seeking Answers’ where, in Makoji, Paul creates a truly memorable character. In ‘Seeking Answers’, the British and the Indians are off-stage: the conversation is between two Kenyans employed by the railways, one of whom dreams of studying to become a barrister in London. This particular relationship between the metropolis and the colony has always been a fraught one, of course, and in Makoji’s frustrated – but indefatigable – dreaming, Paul shows us – in Segal’s words – the triumph of “the intransigence of [colonial] reality over the plasticity of language” – but the dreams, even at the end, remain.

Paul deploys a range of other literary techniques in aid of his indirect – almost glancing approach – to the questions of race and racism in the colonies. In the eponymous story of the volume – ‘Land Lust’ – for instance, the history of colonialism is told by Kenyan labourers through an adapted creation myth featuring Mount Kilimanjaro, in a blend of resignation and defiance.

‘Jambo Rafiqui’, ostensibly a story about the colonial development of the railways in Kenya, begins with a tragic – but seemingly inconsequential death, but a death that haunts the rest of the story, and never allows the grand narrative to overwhelm the basic question of life and death.

‘Rascal’ portrays one of those classic methods of resistance – that of the trickster – when an Indian family that thinks its taking commercial advantage of a naïve local finds – much to its outrage – that the tables were turned all the time (indeed, so deftly – but unforgivingly – does Paul turn us against the internalised arrogance and racism of the family, that by the end, we are all cheering for the “rascal”).

In ‘Everywhere’, we see Kenya from a distance, embodied in the figure of a Kenyan on board a ship returning Indians to India, and the subject of a racialised discourse that exacts its own come-uppance once the ship docks, and the Indians apparently realise – in perhaps the most haunting lines of the book – that “[W]e fled for nothing … the black man is present everywhere.”

In their preface to the book, the editors write that Paul shows us a “tangled, convoluted world where racism doesn’t come only in shades of white and black but is a knotted web with liberal sprinkling of brown.”

This is true enough, but there is something more. It is easy enough to depict racism – its inward and outward forms are well-known and easily defined. But it is harder to depict racism while also bringing out what Teju Cole called “the incontestable fundamentals of a person: pleasure, sorrow, love, humour, and grief, and the complexity of the interior landscape that sustains those feelings.”

Perhaps the unique achievement of Land Lust is that it manages both. In his spare – and gentle – prose, Paul lays bare the racism exhibited by Indians (themselves so recently liberated from a racist regime) in Kenya, while never forgetting that what matters, ultimately, is to prevent that “interior landscape” from being submerged by racism. And so, it is books like Land Lust that allows us to hold out hope that the abyss between the victim and the executioner can, one day, be bridged without the aid of a sword.

Gautam Bhatia is a Delhi-based lawyer. He reviews books for Strange Horizons magazine and on his blog.