Book Review: In 'Rule of Commoner', a Distortion-Free Retelling of the Dravidian Movement

The book serves as a useful resource to understand the rising interest in the self-respect movement and its egalitarian politics, which are seen as an alternative to the centralising tendencies of the Narendra Modi-led BJP. 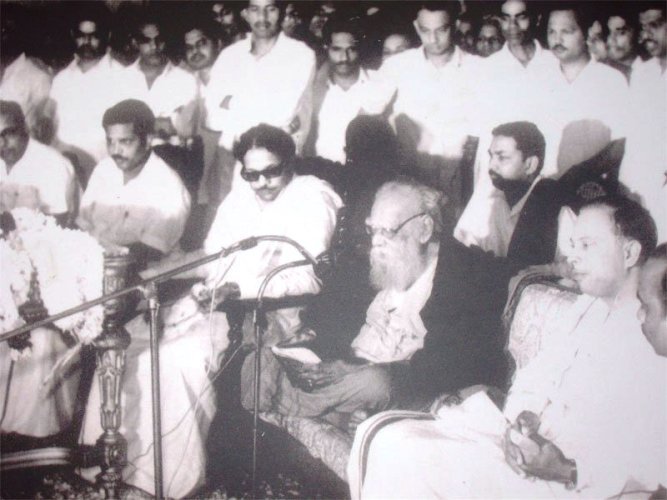 For nearly three decades as a journalist, I have been talking about the role of the self-respect movement in understanding two trajectories for nation-building: Holding together and coming together, and how the Dravidian movement is central to comprehend the idea of decentralisation and cooperative federalism.

When India liberalised its economy in 1991, very little political literature on the self-respect movement was available in English, and the substantial knowledge that was in Tamil was refracted by either the lens of the Left parties or the centralising tendency of the pan-Indian parties.

Though M.S.S. Pandian, S.V. Rajadurai and V. Geetha have written about the political and social impact created by the movement and economists J.Jeyaranjan and M. Vijayabaskar have documented the enabling aspects of the multiple affirmative actions brought forth by the movement, the hold of the pan-Indian narrative was so strong that these valid arguments failed to generate substantial national interests.

However, the ascendency of the Narendra Modi-led Bharatiya Janata Party (BJP) and Tamil Nadu’s relative political autonomy have kindled the national imagination to understand the century-old Dravidian movement and its contribution to an egalitarian imagination of governance.

Since the Dravidian Movement symposium to signpost its centenary and the 50th year of the Dravidian rule in Tamil Nadu, which was jointly organised by two Delhi-based universities (Ambedkar and Ashoka), there has been a steady flow of scholarly inquiry into this crucial southern intervention. An abridged version of the papers presented at the Delhi symposium was brought out as a special issue of Seminar magazine in August 2018.

Neera Chandhoke in an opinion piece for The Hindu recently said that “public intellectuals are the moral conscience of society, simply because they think”. She argued that “to think is to question, to call for freedom, and to invoke the right to disobey”. To her, “our intellectuals have to be reflective, philosophical beings – philosophical in the sense that they think about issues, address contemporary social problems and see them as the legacies of previously unresolved issues of social injustice”.

In that sense, Jeyaranjan emerged as a defining public intellectual of Tamil Nadu during the last decade. He took a conscious decision to write and talk in Tamil explaining the economic, social, and political underpinnings of the Dravidian movement. Rule of the Commoner fills in a gap in the history writing of Tamil Nadu in English, which has been mediated by a particular virulence against the self-respect movement. The book is central today because there is a grudging acknowledgment of Periyar’s role in ushering in a spirit of rationalism but a deliberate closing of eyes to the political possibilities opened up by the Dravida Munnetra Kazhagam (DMK).

In a sense, the book helps a reader to understand why “Go back Modi” trends on Twitter in Tamil Nadu whenever the prime minister visits the state. The book covers a period between the birth of the DMK in 1949 to the party coming to power in 1967 and captures the various underpinnings that defined it as a political, economic, and social force.

In the chapter “Construction of ‘Dravidian-Tamil’ People”, the authors take pains to explain the Dravidar versus Dravida debate.

This aspect of the Dravidian movement is common knowledge in Tamil Nadu, but it is hardly debated outside the state. Along with this crucial difference, the authors also expose the limitations in Sumathi Ramaswamy’s reading of the Tamils in her book Passions of the Tongue. The authors clearly delineate the justifiable pride in one’s mother tongue as opposed to linguistic chauvinism.

The chapter “The Uses of Language” takes us through a journey where the language helped to set an internal frontier between Brahmin and non-Brahmin and to find an egalitarian space for the conduct of democratic politics that can dismantle the casteist hegemony. The layered deployment of language politics gets a fair reading in this chapter as opposed to many rhetorical flourishes that masquerade as erudition.

The authors deal with a vexatious problem that keeps coming up whenever there is an attempt to explain the self-respect movement to non-Tamils. They rightly point out how the use of the term ‘vernacular’ is the beginning point of the contestation. They pointedly, and rightly ask:

“What does it mean to call Tamil a vernacular language? What distinction is introduced by such an adjective? Tamil is certainly one of the oldest languages of the world; it is also a classical language in terms of possessing literary texts of antiquity, many parts of which can still be read contemporaneously without the aid of lexicons and commentaries. It is a language spoken by about 80 million people in Tamil Nadu. In writing the history of Tamil-speaking people, if one refers to Tamil language sources, it is deemed as referring to vernacular language sources, whereas English-language sources are not deemed as vernacular sources.”

The lack of scholarship that delved deep into Tamil-language sources is partly the reason for the distorted presentation of the Dravidian movement. Its story was mediated through the lens of centralising forces that viewed any differences as “fissiparous” tendencies.

The book documents in a meticulous manner that portion of history that was either erased or subsumed by the desire to create a pan-Indian identity. One aspect that the authors explore in detail is how the strengths of the movement were carefully presented as weaknesses.

For instance, the Dravidian leaders are known for their oratory that drew not only from ancient Tamil literature but also from the elements of modern theatre. But this skill, which helped them to establish a connection with the masses, was reduced to mere ‘rabble-rousing’ or varthai jalam (wordplay) by the powerful pan-Indian section, which included those from the Left as well as from the Congress.

The book is an empirical treasure trove. For instance, to prove the point that the DMK was a political front of the commoners, the authors record the detail of the 133-member first general council of the party that was formed on September 17, 1949.

The authors point out, “…were mostly from a lower middle-class background with no significant property holdings to speak of. Furthermore, they were mostly young, who could treat the forty-year-old Annadurai as an elder brother.” The authors give the age of some of the significant leaders when the party was born in 1949. Karunanidhi was 25, E.V.K. Sampath was 23, Nedunchezian was 29.

Authors have used the idea of the play of immanence and transcendence to show how the party drew a fine line to distinguish between compromise and conciliation, where the accent has been on creating a conciliatory framework for an inclusive polity.

The significant contribution of the book is to delve deep into the texts created by the Dravidian leaders like Annadurai, Karunanidhi, Rama Arangannal, Nedunchezian, and S.S. Thenarasu to contemporary literary figures like the Sahitya Academy award winner Imayam, to explore the full import of the terms such as liberty, equality, humiliation, dignity, and sovereignty.

The book provides the framework to understand what we call the Dravidian model of polity.