Violence, Hierarchy, Expansion: What Lies Behind the US's Military Power?

David Vine’s 'The United States of War' is one of the most illuminating studies of how the US' empire of forts and bases developed and works. 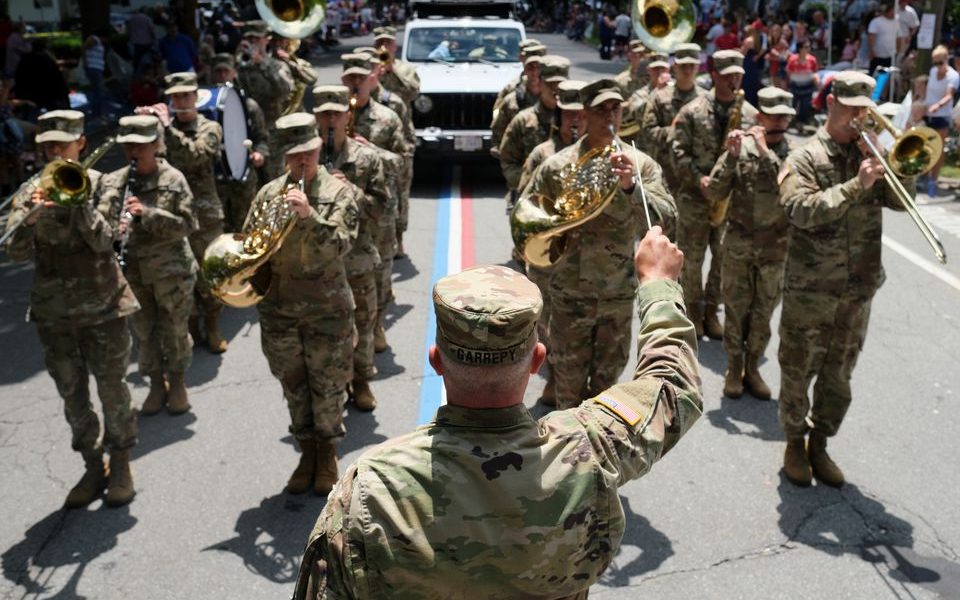 The defence of the United States, unlike charity, does not begin at home.

Its foreign policy elites claim that US national security is threatened across the world and that renders everywhere an ‘American interest’. To secure that interest against permanent threats requires the largest military budget in history, around 800 military bases worldwide, global surveillance systems, navies that prowl every sea and armies that the navy lobs to fight endless wars on foreign lands.

Even more profoundly, this expansive notion of security threats requires and has birthed a paradigm-busting conception of borders that aligns with the globalised movement of goods and people; that the US either wants or rejects, regardless of geographical location. The US border is no longer just a line on a map between it and Canada or Mexico; it’s anywhere the US state decrees and signs agreements with overseas border guards. Those guards are now doing the jobs of US border police and officials thousands of miles from the US homeland – in Central and South America, the Philippines, Ireland, Turkey, among others.

Also read: From Left to Right, the Penny is Dropping that the Days of US Armed Supremacy Are Numbered

This paradigmatic shift is accompanied by the ballooning of the budgets of the Department of Homeland Security and related forerunner bureaucracies, particularly since 9-11. The Homeland must be protected from the Barbarians who, for no apparent or explicable reason to do with the United States, ‘hate us’ and want to do ‘us’ harm. Actually, they hate ‘our’ values of freedom, progress and democracy. They understand only the language of force and threat of force, and must be treated accordingly.

It is a version of America’s role in the world unburdened by the weight of the evidenced ranged against it, yet remains the dominant ideology of US foreign policy elites – just open any newspaper, watch practically any mainstream news network, read any learned review of foreign affairs or think tank report, attend any class in international relations or foreign policy in a leading American university, or tune in to virtually any speech of leading Democrats and Republicans.

The White Anglo-Saxon Protestant (WASP) establishment – now in full technicolor with its visibly diverse and suitably compliant appointees – may be divided on many issues, but they display impressive near-monolithic unity on America’s need to fund and project lethal military power and violence on and under the seas, in the air, in space and cyberspace; and act as gatekeeper and guardian of the global movement of people and goods.

Welcome to the borders and bases strategies of the US empire, emblematic of 21st century technologies and global reach while echoing all the way back to the very dawn of the American republic. Bases and borders are a fascinating way to understand the nature of colonial and imperial power and the expansionist and hierarchical thought and strategies which lie at their heart. Pry open any aspect of a society, especially of a great imperial power, and discover even in that limited sphere practically every sinew, priority, value, theory and practice; that society’s leaders’ characteristics, ideas, prejudices, governing interests, ideologies and world views.

Also read: Why India Must Avoid Hitching Itself To US Military’s Plans For China And The Indo-Pacific

The United States is no exception to this rule. For a detailed exploration of the new border paradigm, Todd Miller’s Empire of Borders (2019) is excellent investigative journalism – insightful, well researched and accessible. A great complementary companion volume to the book under review here.

David Vine’s The United States of War proves to be one of the most illuminating studies of how the empire of forts and bases developed and works. Vine, an anthropologist at American University in Washington, DC, begins by asking a disarmingly simple but necessary question: why are so many towns and cities in the US called ‘Fort’ something?

Fort Lee, Fort Worth, Fort Collins, Fort whatever; hundreds of such place names across the country – why? From that point, Vine shows something that seems rather obvious once revealed but which too few have bothered researching in depth – that the US was born fighting, born colonialist, born expansionist and born enslaving, exterminating and excluding people of colour, as well as waging class war on the poor, regardless of race. 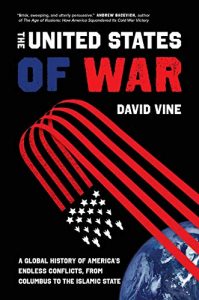 The role of forts – military bases – in the colonial expansion of the US to its current continental territory is usually ignored. Or rather, it’s hidden in plain sight. How else was Native American territory seized? The fort was on the frontline of the frontier. American colonial expansion followed the fort.

The original 13 colonies that won their freedom from British colonial rule in 1783 covered 430,000 square miles – nowhere near the current US continental territory – but nevertheless the size of Britain, France and Germany combined. Today, US territory stands at almost 4 million square miles. Most of that had been added before the US’ imperial career is conventionally understood to have begun (1898) – a serious error.

Clearly, US imperialism and colonialism did not start in 1898. 1898 was a continuation of a strategy that started over a century earlier. The first foreign bases built by Euro-Americans predate the 1776 Declaration of Independence. From 1785 and the building of Fort Harmar, in Ohio, US bases encroached on Native American territory, encouraged westward-bound colonial settlements, seized land, and displaced and exterminated the indigenous peoples.

This was a holocaust on a massive scale that led to a new racist ideology to justify it – the natives weren’t really human; they were savages. Hence, scorched earth tactics, terror, assassination – “America’s first way of war” (page 50) that condoned violence against non-combatants and total destruction of villages and fields. Not just a way of war but the forging of a distinct US identity, according to Vine, that shaped later war-making, especially against those deemed racially inferior.

And this latter point is fundamental: successive generations of soldiers and citizens “made the killing of Indian men, women, and children a defining element of their first military tradition.” Violence for gain and expansion led to racism to rationalise and intellectually and morally justify massive violence. “The idea of race and defined ‘white’ and ‘Indian’ races solidified only in the mid-18th century, long after the cycles of brutality… were well underway…” (page 50).

That first way of war became key to being a white American. Indian wars were constructed as race wars – modern military Orientalism was born in bloodshed. It created white identities as fundamental to a prior right to power, land and privilege; an identity drenched in blood.

Exclude, exterminate, enslave, expand and expropriate. That’s the US Empire in a nutshell. The main issue is the principle of selection. Who decides? Who holds the power to define, decide, allocate resources and give orders? Though Vine does not labour the point, it is abundantly clear where he places the power of decision and perpetuation of the violent power that US bases embody: a powerful network of elites that rules America in their own interests and who sell the story to the broad mass of people that it is for their own good, so don’t ask questions about budgets or building bases or going to war.

Also read: Why Are Americans So Interested in the War in Ukraine?

It is the very sentiment expressed in the iconic words of Colonel Nathan R. Jessop in A Few Good Men, and the kind of military-industrial complex President Dwight Eisenhower warned about in 1961 – despite presiding over its formative years and, as a former US general, personifying the increasingly powerful links between the tripartite power elite sociologist C. Wright Mills identified in 1956: the corporate rich of Wall Street; warlords of the Pentagon; and the political directorate in the executive branch in Washington, DC.

Space prohibits too much more detail from Vine’s fascinating research and analysis – including hundreds of personal visits to US domestic and foreign bases. But any review would be remiss if it did not say something about his presentation of so many wonderfully illuminating maps of US forts, bases and military attacks and conflicts over time, starting in the 1770s through to the present day.

Those pictures, maps and graphs alone speak volumes: 90 domestic forts and bases across the USA from 1785-1878; wars, combat actions across the world from 1849-1898 (including Japan, China, Korea, Angola, Egypt, Uruguay, Turkey, among others); US bases, installations and so on shown to have expanded to every continent between 1776-1903; the 16 US bases in Asia, Latin America and the Indian Ocean after 1898, whose construction led to the displacement of local inhabitants.

It is pertinent to cite the treatment – forced relocation – of the Chagos islanders to make way for a US military base in a strategic area of the Indian Ocean. This was in pursuit of the US’ Strategic Island concept, which involved occupying small island territories, frequently uninhabited, and converting them into military bases free from fear of local anti-base protests.

The island of Diego Garcia had the misfortune of being located right in the middle of the Indian Ocean, “within striking distance of.. southern Africa to the Persian Gulf to Southeast Asia” (page 219). It was also advantageous that the island was under British colonial control even if several hundred people had lived there since the 1770s, descendants of enslaved Africans and indentured Indian workers. For $14 million in 1966, Britain gave the US basing rights and agreed to remove the Chagossians. That base proved especially useful to US war plans after 9-11.

The closeness of the US and British elites’ ideas and attitudes is openly racist towards the Chagossians – who were referred to as ‘Tarzans’ and ‘Men Fridays’, misrepresented as a floating and not permanent population as cover at the United Nations.

According to a Colonial Office memo, the aim was to show the Chagossians as an impermanent population “because to recognise that there are any permanent inhabitants will imply that there is a population whose democratic rights will have to be safeguarded and which will therefore be deemed by the UN to come within its purlieu…. This device, although rather transparent, would at least give us a defensible position to take up at the UN.” So much for the rule of law and decolonisation.

Encouragingly, in the face of what seems an inexorable and unstoppable tide of US military bases, Vine supplies a map of the world dotted with major anti-base protests and instances of bases being closed or blocked by local resistance – in Europe, Asia, Australia and Latin America. Imperial power generates its own gravediggers, though the costs exact a deadly toll.

What’s it all for? Well, George Kennan – Princeton scholar, state department planner, fully paid-up member of the US establishment who coined and outlined the Cold War strategy of ‘containment’ through an anonymous article published in the elite’s house organ, Foreign Affairs, said it pretty clearly in 1948:

“We have about 50% of the world’s wealth but only 6.3% of its population. Our real task in the coming period is to devise a pattern of relationships that will permit us to maintain this position of disparity without positive detriment to our national security… We need not deceive ourselves that we can afford today the luxury of altruism and world-benefaction.” (pages 189-190).

It doesn’t get much clearer than that.

Inderjeet Parmar is professor of international politics at City, University of London, and a Fellow of the Academy of Social Sciences. His Twitter handle is @USEmpire.