A review of George Mathen aka Appupen's graphic novel 'The Snake and the Lotus '. 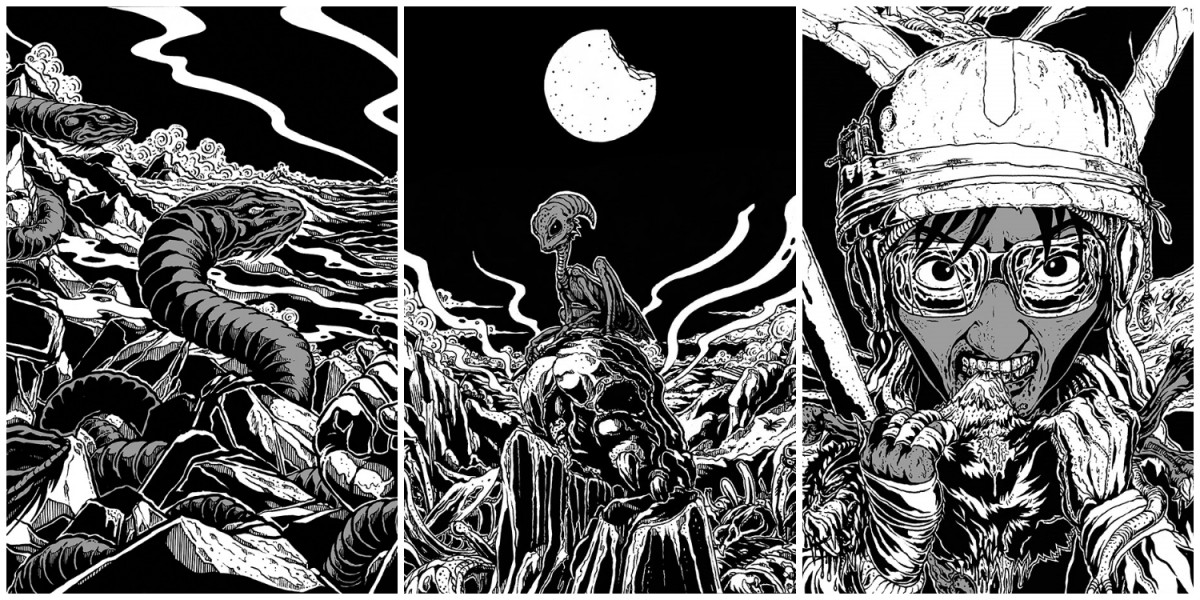 The graphic artist George Mathen, better known by his nom de plume Appupen, has made several significant strides in the crafting of a comprehensive visual imagination in his fourth graphic fiction, The Snake and the Lotus (Context, 2018). Using the aesthetic of the wood-cut (with its inbuilt volume, texture and grain), and with a format of a panel a page – there are over two hundred and fifty meticulous pages – Appupen narrates the perils of ecological dystopia in black, white and grey. In this work, the pronounced achievement and the chief point of interest is Appupen’s mastery of the non-human world (both futural ruins as well as animal shapes). Appupen is equally skilled at drawing the weightless wing and web of a bird, as in the interweaving of heavy pipe-like buildings and ridges of stalagmites in his moonscape Halahala world.

There are extensive uses of piles of objects, where lumpy animal and human body parts are thrown alongside shapes of rusted and twisted iron. The buildings often seem to have eyes like cameras or the portholes of ships (one’s misery is perhaps being watched, recorded, fitted into some database). And then there are other, even more wretched colonies which have some dim familiarity with the chawls of the earth – parapets, littered streets, tiny windows, clothes hanging to dry, festival pennants, food carts, graffiti. It seems as if Halahala is a planet that humans escaped to after destroying earth – and then the humans (or humans in their avatar as rapacious godlings) proceed to harrow that second haven too.

The narration per se is not the strongest point – there is the familiar rhetoric of environmental catastrophe. Appupen avoids the elementary story of a human/humanoid in the race to save the world with its climax consisting of a final battle with the forces of evil capitalism – for example, in Appupen’s work, the protagonist does not unambiguously save the world and she is herself drawn less as muscular superhero than as a vulnerable, violated girl.

Yet, for many readers, several other tropes may be required to fully flesh out the emotional world that must accompany the visual world. One is truly able to break out of the ‘superhero saving the world’ mould not simply by critiquing from within, but allowing other narrative tropes fuller play. Instead of a self-enclosure of just human and world, there has to be space for other adult relationships that readers cannot excise – family, romance, history and so on, rather than just the unidimensional moral fable of political outrage.

Also Read: Banksy and the Tradition of Destroying Art

In comparison to the inspired intricacy of the dystopic urbanscape, the drawing of the human is one of the weaker elements. Indeed, the element of the human (with its corollary of the narrative) is less interestingly depicted than some of Appupen’s earlier work where there was more narrative self-consciousness (such as dreams within dreams, or reflections on the relationship of art and creation to deception and manipulation).

Halahala is itself constructed as a machine (that is, not so much as a world with machines, but a machinic world) whose very physiology are the pipes that transport human essence in the way that pipes on earth have long transported petroleum. This may be why reptiles and insects are so attractive to the artists’ pen – with their exoskeletons, their many eyes, wings, antennae, translucent bone, distinctive, multi-scaled mouthparts. They can be both menacing (especially drawn out of scale), as well as humble, resilient, evocative of human gesture and posture. A fine sense of the danger and fragility of these creatures are communicated – the bleached bone is outside, unprotected by muscle and skin.

Appupen’s style is markedly distinct in the world of the contemporary graphic novel. As in fine woodcut, many panels appear as if the blocs of black have been carved and cut by the line, thus releasing strips of white – the background or negative space of the black is often mitigated by streaming spindles of white (or the white may more specifically be smoke, or milk, or flag or wing), or they may be the white volumes of flower, cloud, skull – all these motifs recur and ground the work. And sometimes the white is just the glitter of stars in the sky, or falling white pollen or snow.

The rich, heavy beauty of this white and black world requires a very slow absorption of each page and the book should ideally be returned to several times for seeing the unexpected, sharp and pointed visual detail (a fish-like tongue, for example). The triumph of the work lies in its draughtsmanship which transports us into a scrupulous, lavish and lovingly imagined alternate universe.